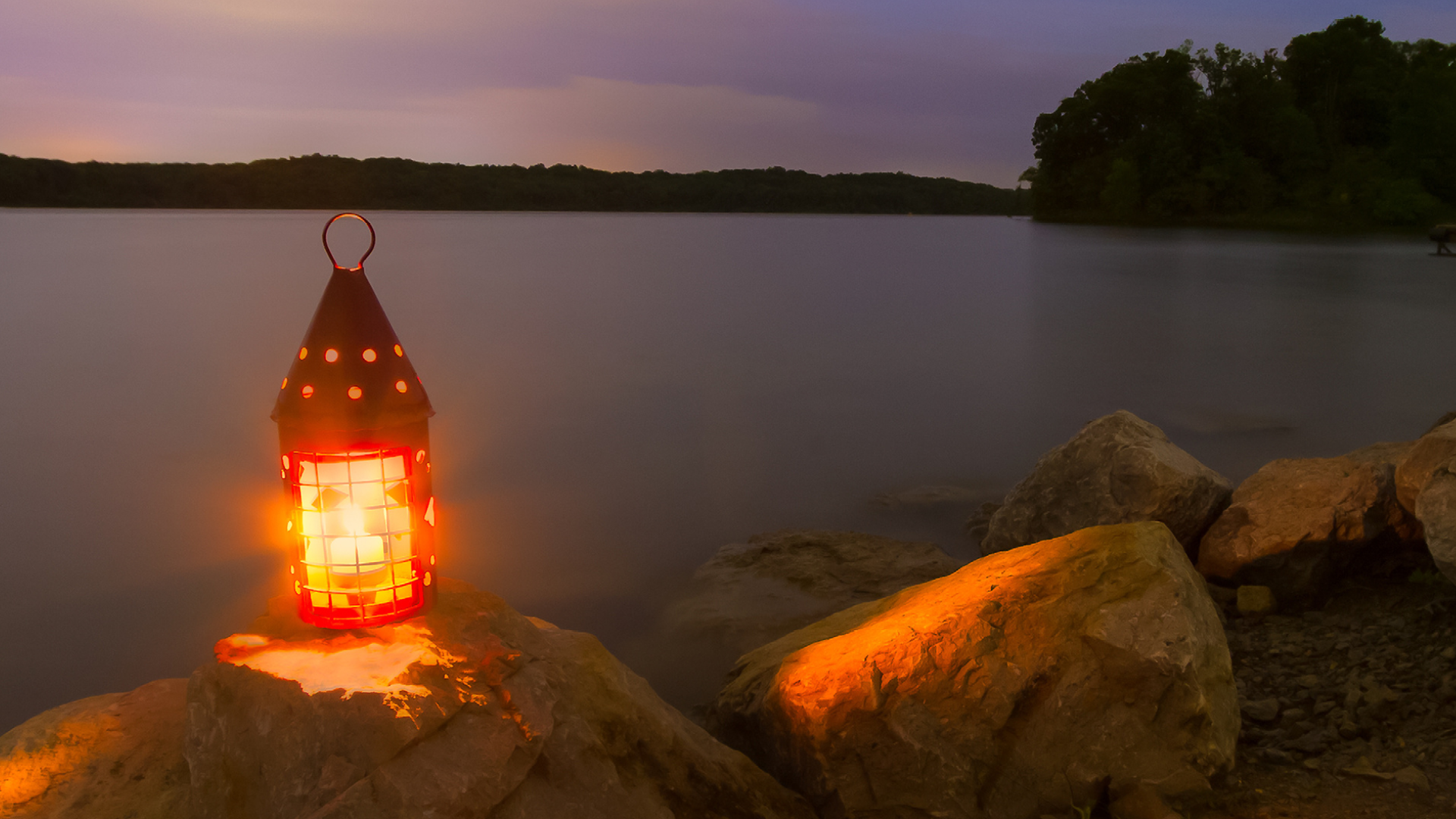 In the Matter of Interest

Tax on Interest Income in Malaysia

“Interest” is defined as the return or compensation for the use or attention by one person of a sum of money belonging to or owed to another in Halsbury’s Laws of England. In Riches v Westminster Bank Ltd (1947) AC 390, Lord Wright observed that “interest is payment which becomes due because the creditor has not had his money at the due date. It may be regarded either as representing the profit he might have made if he had had the use of the money, or conversely the loss he suffered because he had not that use”.

In the Malaysian tax landscape, there is no statutory definition of interest given in the Malaysian Income Tax Act 1967 (MITA). This article seeks to examine on the type of interest income which is chargeable to tax in Malaysia and, on the flip side, on whether interest expense incurred is deductible against the gross income.

This article was first published in the Tax Guardian (April 2021), a publication by the Chartered Tax Institute of Malaysia. 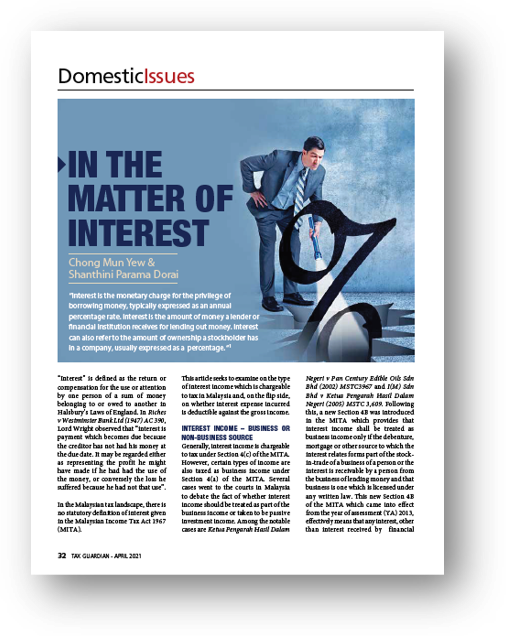 Generally, interest income is chargeable to tax under Section 4(c) of the MITA. However, certain types of income are also taxed as business income under Section 4(a) of the MITA. Several cases went to the courts in Malaysia to debate the fact of whether interest income should be treated as part of the business income or taken to be passive investment income. Among the notable cases are Ketua Pengarah Hasil Dalam Negeri v Pan Century Edible Oils Sdn Bhd (2002) MSTC3967 and I(M) Sdn Bhd v Ketua Pengarah Hasil Dalam Negeri (2005) MSTC 3,609. Following this, a new Section 4B was introduced in the MITA which provides that interest income shall be treated as business income only if the debenture, mortgage or other source to which the interest relates forms part of the stockin- trade of a business of a person or the interest is receivable by a person from the business of lending money and that business is one which is licensed under any written law. This new Section 4B of the MITA which came into effect from the year of assessment (YA) 2013, effectively means that any interest, other than interest received by financial institutions (banks and so on), shall not be treated as business income.

Further to the introduction of Section 4B, the Inland Revenue Board of Malaysia (IRBM) has issued Public Ruling (PR) 3/2016 on “Tax Treatment on Interest Income Received by a Person Carrying on a Business”, which provided explanation on the tax treatment in respect of interest income received by a person carrying on a business. Among the examples of interest income mentioned in PR 3/2016 that cannot be treated as business income from YA 2013 are interest charged due to delay in payment of trade debt, interest from an easy payment plan, interest from fixed deposit placed as security and interest received by a person from loan given to employees. With the introduction of Section 4B of the MITA, the question arises as to whether the fundamental tax principle of any income receivable incidental to and in the course of carrying out a business activity should be treated as part of that business income is still in place? 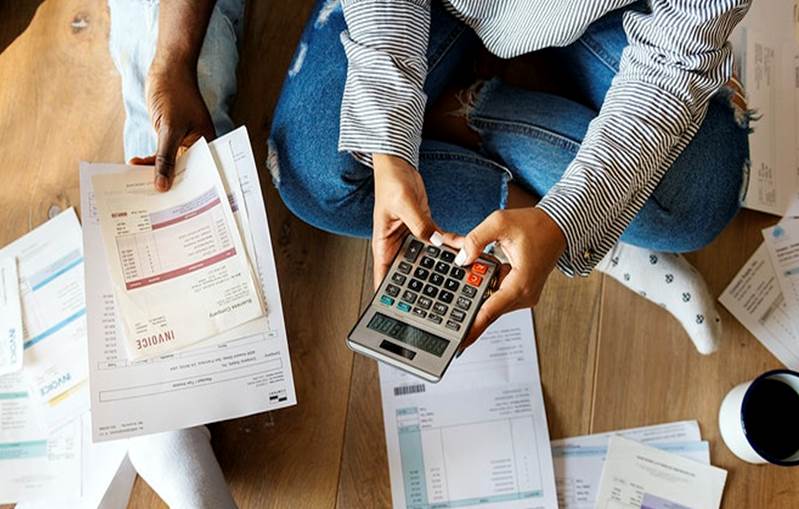 Interest Income - When Is It Derived?

Deemed Interest Income From Loans Or Advances To Director

At times, companies may extend loans or advances to its directors either from its internal funds or from external borrowings. These loans or advance would generally be free of interest as there is no additional funding incurred by the company. By virtue of Section 224 of the Companies Act 2016, a company (other than an exempt private company) is explicitly prohibited from providing a loan to a director of the company or of a related company except in certain situations. Effective from YA 2014, Section 140B of the MITA was introduced to deem the interest income from loans or advances to directors as taxable income of the lending company. The IRBM also issued PR8/2015 on “Loan or Advances to Director by a Company” to explain on the tax treatment of interest income deemed to be received by the company from the loans or advances to directors of the company without interest or with interest rate lower than the arm’s length rate. The interest income for the basis period for a year of assessment shall be the aggregate sum of monthly interest in the basis period, computed in accordance with the following formula: 1/12 x A x B where A is the total amount of loans or advances outstanding at the end of the calendar month, and B is the average lending rate of commercial banks published by the Central Bank at the end of the calendar month, or where there is no such average lending rate, such other reference lending rate as may be prescribed by the Director General. The Tax Policy Department of the IRBM has clarified that Section 140B of the MITA is applicable to directors of the company (as defined in Section 75A(2) of the MITA and to loans or advances which are financed by the company’s internal funds only. It does not apply to loans/advances funded from external loans or loans from third parties. 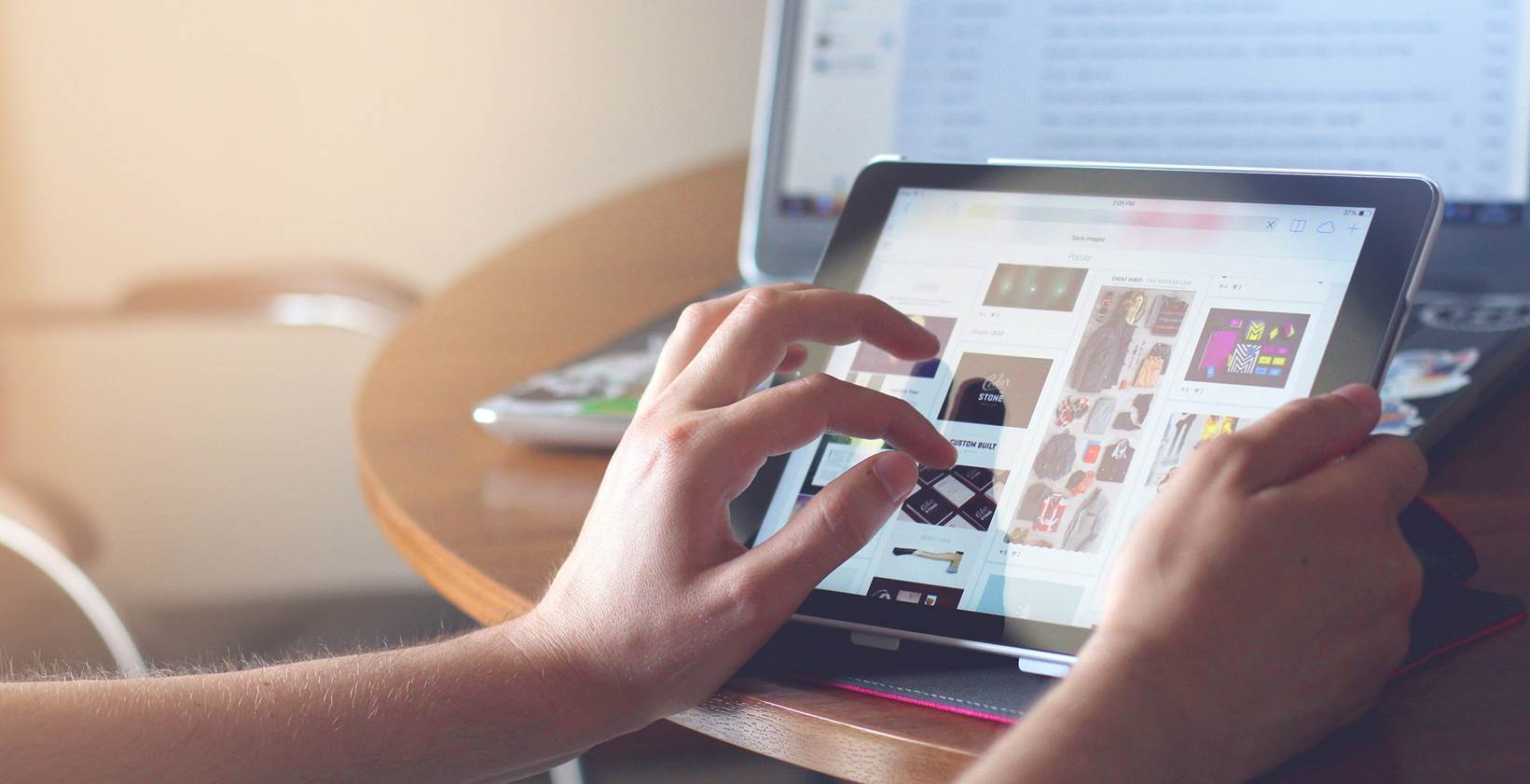 Interest Income During the Moratorium Period

Based on the reading of the law, interest expense is deductible when it is incurred in the production of income. The purpose of borrowing the money is an essential factor to consider when determining the deductibility of this type of expense. Typically, if money is borrowed for general working capital or purchase of fixed assets, the interest paid on the indebtedness would qualify for deduction. However, the deductibility of certain types of interest expense may be impaired by the operation of anti-avoidance provisions such as Section 33(2) of the MITA. This provision provides for a restriction of the interest deductible where a person borrows money for business purposes, but the money is partly used to finance non-business operations.

Interest Expense - When is it Deductible?

Interest Expense During the Moratorium Period

To restrict the deductibility of interest in relation to financial assistance in controlled transactions, Section 140C of the MITA was introduced in the 2018 Budget announcement. Following that, the Income Tax (Restriction on Deductibility of Interest) Rules 2019 (Rules) was gazetted for the implementation of Section 140C of the MITA. The Rules which came into operation on 1 July 2019 provides that there is now a maximum threshold on the allowable deduction on interest expense for a YA in the context of group financing. The maximum amount of interest expense allowed is 20% of the tax-EBITDA (earnings before interest, taxes, depreciation and amortisation) of a taxpayer from each of his sources consisting of a business for a YA. The tax-EBITDA is determined as follows: A + B + C

Where:
(a) “A” is the amount of adjusted income of a taxpayer before any restriction on deductibility of interest;

(b) “B” is the total amount of qualifying deductions allowed; and

(c) “C” is the total amount of interest expense incurred in relation to the gross income of the taxpayer for any financial assistance in a controlled transaction.

Interest restriction is inapplicable where the total amount of interest expense in respect of all financial assistance is equal to or less than RM500,000 in a YA. In addition, the Rules do not apply to selected classes of taxpayers, namely, individuals, banks, insurers, development financial institutions, construction contractors and property developers. In relation to the Rules, the IRBM published its Guidelines on Restriction on Deductibility of Interest on 5 July 2019 (the Guidelines). The Guidelines provide detailed explanation into the interpretation of the Rules by the IRBM together with examples of how the Rules will be applied. However, the Guidelines have no legal effect. There are inconsistencies in relation to the scope in covering the domestic and cross-border related party financial assistance as depicted by Section 140C of the MITA, the Rules and the Guidelines. The Guidelines appear to limit the scope of the restriction on the deductibility of interest to cross-border transactions only. However, the wording of Section 140C of the MITA seem to have a wider scope which covers both domestic and cross border related party financial assistance. Following the issuance of the Guidelines, can the IRBM decide to expand the scope of Section 140C of the MITA to cover domestic financing arrangements as well? Although the Guidelines do not have the force of law, are they binding on the Director General of Inland Revenue? In light of the restriction on the deductibility of interest in relation to financial assistance in controlled transactions, taxpayers in Malaysia with cross-border financing arrangements should ascertain whether their interest expense exceeds 20% of their tax-EBITDA and ensure compliance with the provisions of the MITA and the Rules. 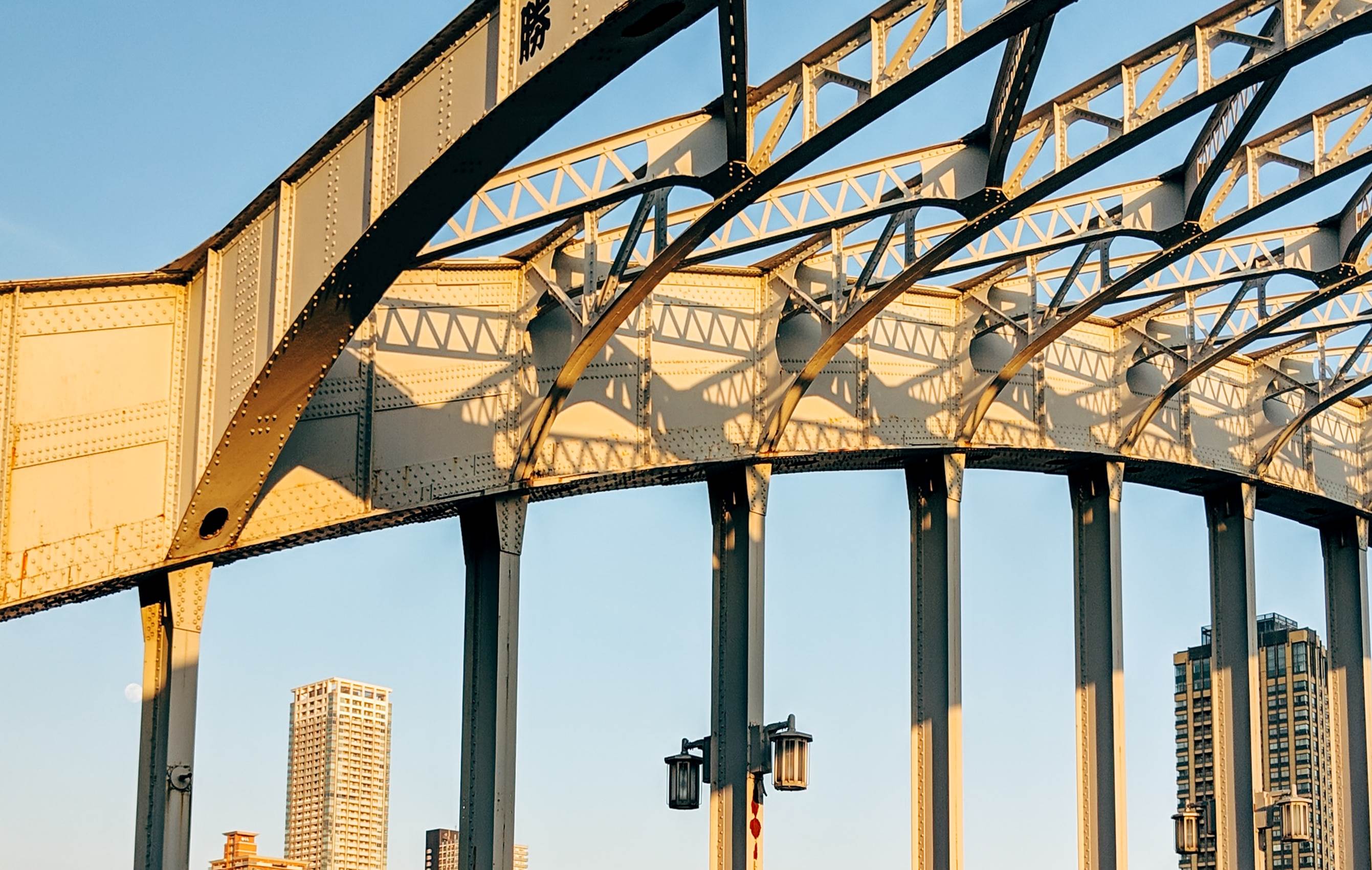 In conclusion, it is evident from the above analysis of the tax treatments of interest in Malaysia that the law has changed significantly. Generally, interest income is subject to tax when it is received, and
interest expense is deductible when it is incurred. In the event of a loan between related parties, anti-avoidance provisions will be invoked to synchronise the deduction of interest expense with the taxing of the interest income. The tax law relating to interest will continue to evolve with the various types of transactions carried out by individuals, companies and organisations. All stakeholders must work hand-in-hand to ensure that the tax collection and tax compliance process benefits the nation as a whole. Frequent dialogues and discussions must be held between the tax authorities, taxpayers, tax agents and the business owners before a new tax law is implemented.

Disclaimer: This article does not seek to address all issues  associated with interest income and interest expense. All views expressed herein are purely the personal opinions of the authors.

Tax & Investments in Malaysia
What are the tax concerns for emerging investment vehicles?
Badges of Trade
Badges of trade are used as a guide in determining whether a person is carrying on trading activities or otherwise.
How should cryptocurrencies be accounted for in the financial statements?
The accounting treatment of the crypto-assets depends greatly on the purpose for holding the crypto-assets.
Challenges for companies during tax filing season
Tax filing for 2020 will become more challenging due to more onerous provisions of the tax law - Are you prepared?