home News Geotaxation and the Digital: Janus in the Mirror 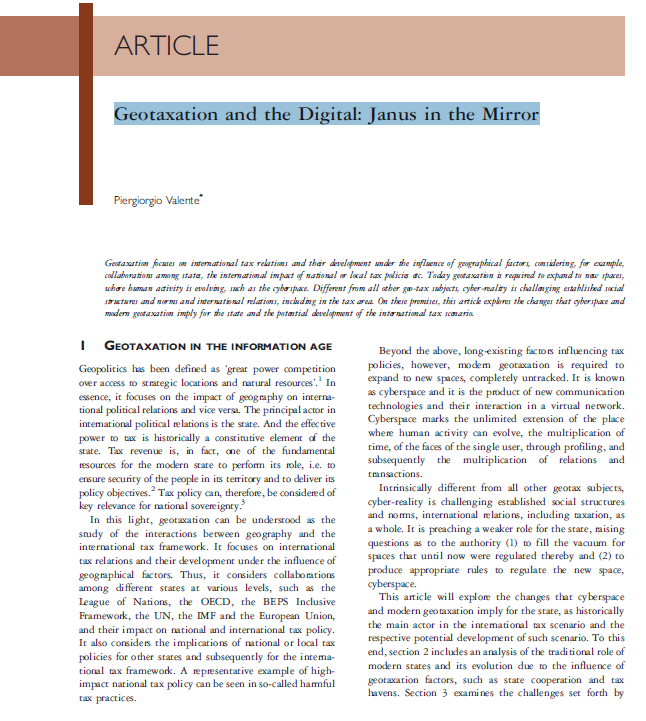 Geotaxation and the Digital: Janus in the Mirror

Geopolitics has been defined as ‘great power competition over access to strategic locations and natural resources’.
In essence, it focuses on the impact of geography on international political relations and vice versa.
The principal actor in international political relations is the state. And the effective power to tax is historically a constitutive element of the state. Tax revenue is, in fact, one of the fundamental resources for the modern state to perform its role, i.e. to ensure security of the people in its territory and to deliver its policy objectives.
Tax policy can, therefore, be considered of key relevance for national sovereignty. In this light, geotaxation can be understood as the study of the interactions between geography and the international tax framework. It focuses on international tax relations and their development under the influence of geographical factors. Thus, it considers collaborations among different states at various levels, such as the League of Nations, the OECD, the BEPS Inclusive Framework, the UN, the IMF and the European Union, and their impact on national and international tax policy.
It also considers the implications of national or local tax policies for other states and subsequently for the international tax framework. A representative example of high impact national tax policy can be seen in so-called harmful tax practices.