Running for the Cure 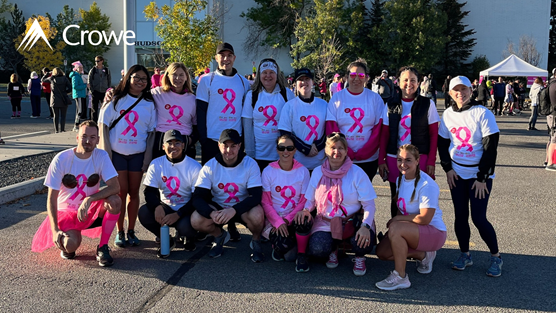 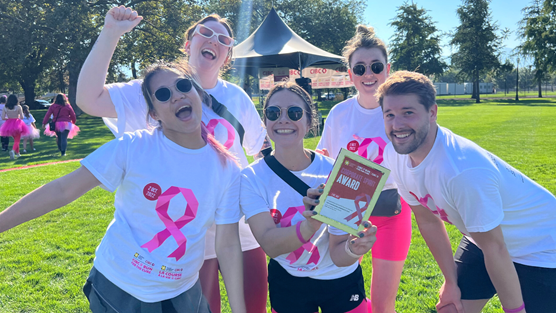 Crowe MacKay is invested in more than just the success of its clients and team members, but in its community as well. Since the firm’s inception in 1969, they’ve established a one-of-a-kind culture where making a difference is a priority. Now, over 50 years later, Crowe MacKay continues with this belief and has taken their core values one-step further at this year’s 2022 Annual Conference in Calgary, Alberta.

Each-year, Crowe MacKay hosts an annual conference in one of its eight markets across northern and western Canada. The conference is an opportunity to connect with colleagues and grow their technical and personal skills. This year, each attendee has the opportunity to hit the pavement and join Crowe MacKay’s CIBC Run for the Cure team 'Jeneration Inspiration.’

Jennifer Mendes, Crowe MacKay Senior Manager in Kelowna, has been coordinating the Run for the Cure team in Kelowna since 2016. With the support of her office, she’s raised roughly $25,000 for breast cancer research and is ecstatic for the opportunity to support this cause as one firm. “Our firm supports many local charities and causes, especially those that are important to our team,” says Jen. “After six years of our Kelowna team participating in Run for the Cure, I’m excited to finally have team members from across the firm be in the same city where we can run together.” Firm-wide Human Resources Manager, Alena Christie, echoes Jen, sharing that “we truly have a culture that cares about our people and communities. We are always creating pathways to be actively engaged, offering opportunities and encouraging employees to get involved in causes they’re passionate about.”

Breast cancer affects everybody. There is no age limit or gender bias. I want to support finding a cure so future children and grandchildren do not have to face this disease. - Jennifer Mendes

This year, Crowe MacKay raised a total of $9,096.50 for CIBC Run for the Cure in both Calgary and Kelowna.

Running for the Cure