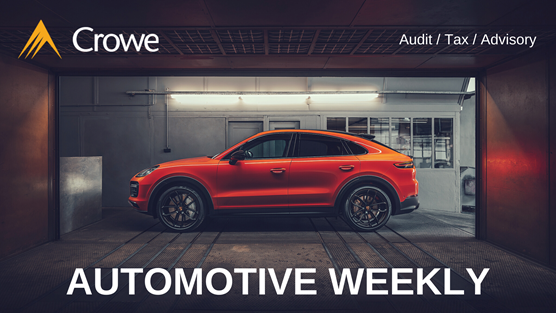 Wholesale used-vehicle prices fell "substantially" in August to cap off a summer that had been marked by more gradual monthly price declines. Cox Automotive said Thursday that wholesale prices declined 4 percent in August compared with July. The Manheim Used Vehicle Value Index — an indicator of used-vehicle market pricing trends — declined to 210.8, down from 219.6 in July.

BMW AG plans to buy electric-vehicle batteries from six new factories to be set up and run by companies including Contemporary Amperex Technology Co. Ltd. and Eve Energy Co. as the world’s biggest luxury-car maker attempts to overhaul its supply chain. Two plants each in Europe, China and North America will produce round lithium-ion cells that enable longer ranges and faster charging than the prismatic cells BMW currently uses, the company said Friday. At roughly half the cost, the technology is meant to bolster BMW’s planned “Neue Klasse” EV platform and follows Tesla Inc., which has been using a cylindrical shape for some time.

Even though battery costs are rising, auto companies are rolling out more affordable electric vehicles that should widen their appeal to a larger group of buyers. The latest came Thursday from General Motors, a Chevrolet Equinox small SUV with a starting price somewhere around $30,000 and a range-per-charge of 250 miles (400 kilometers). You can get range of 300 miles (500 kilometers) if you pay more. GM won’t release the exact price of the Equinox EV until closer to the date it goes on sale, about this time next year. But the SUV is at the low end of Edmunds.com’s list of prices for electric vehicles sold in the U.S., where the average cost of an EV is around $65,000.

The nation's largest dealer groups are pulling ahead of the pack in online customer service, a report out Monday from retail service tracker Pied Piper found. In Pied Piper's survey, 12 out of 15 groups scored higher than the industry average. Napleton Automotive Group, which ranks No. 13 on the Automotive News list of top 150 dealership groups based in the U.S., earned the highest marks, with a score of 74 out of 100.

Based on their current pace, full-year certified pre-owned vehicle sales are likely to see a double-digit-percentage decline from 2021 and reach their lowest annual tally in eight years. However, there were was some momentum in August, at least from a sequential standpoint. That’s according to a Data Point report from Cox Automotive, which said there were 211,609 CPO sales last month. The report, which is based on Cox’s analysis of Motor Intelligence data, indicates that is a 2.6% month-over-month increase and a 5.1% year-over-year decrease. Comparing those numbers to overall used-car retail sales (i.e. those involving a dealer), Cox Automotive found that CPO performed favorably on a year-over-year basis and slower on a month-over-month basis.

When AutoNation CEO Mike Manley said dealerships need to evolve to meet customers’ preferences as the industry shifts to battery-electric vehicles, it sparked an idea for John F. Possumato, founder and CEO of DriveItAway. Possumato originally launched DriveItAway as a subscription service to give would-be car owners with low or no credit ratings and few down-payment options beyond the “No Credit-Low Credit,“ high interest rates used auto dealers charge. DriveItAway allows shoppers to choose vehicles and drive them as rentals with no commitment to keep it. Drivers pay usage fees that build payments that can be used to buy the car. But rather than choose from among used cars – in short supply during the past two years – shoppers choose from dealers’ inventories of new battery-electric vehicles.

About 76,000 more vehicles had to be cut from global supplier production schedules due to shortages of microchips, according to the latest estimate from AutoForecast Solutions. Some 22,400 vehicles were just trimmed from factory production plans in North America this week due to short supply, while 34,000 vehicles are being cut at European plants. In another notable development, AFS said assembly plants in South America are cutting back by 19,700. So far this year, automakers have had to cut back by a total of 3.23 million vehicles due to chip shortages. That’s in addition to more than 10 million units lost in 2021, and excludes schedule reductions resulting from other supply chain problems, such as the war in Ukraine.

Invest Up to $1.2 Million to Keep Selling EVs
Ford's U.S. dealers must invest as much as $1.2 million and adhere to rigorous sales standards if they want to sell electric vehicles beyond 2023, as the brand tweaks its retail model to better compete with direct-sales startups. Dealers have until Oct. 31 to opt into one of two EV certification tiers that cover varying investment levels in fast chargers and staff training. Those who choose not to invest will be limited to selling internal-combustion vehicles and hybrids from the Ford brand. EV dealers must sell the products at nonnegotiable prices and won't be allowed to carry them in inventory, instead having customers order exactly what they want for later delivery.

American-Italian-French automaker Stellantis NV said on Tuesday it will buy back shares worth about 923 million euros ($919.31 million) from General Motors Co. Stellantis said it would buy back about 69.1 million common shares, or about 2.2% of the company's share capital. General Motors currently holds this stake in Stellantis in warrants, which it will convert into equity shares for Stellantis to purchase on Thursday, according to the statement.

The rising value of the U.S. dollar in international exchange markets is inflating the value of exported U.S.-made vehicles while reducing the cost of competing imports and parts sourced overseas. With war and inflation making the U.S. dollar an attractive option to currency traders, the greenback has been appreciating, including against the euro, Japanese yen, Canadian dollar, British pound, Swedish krona and Swiss franc – making up the U.S. dollar index (USDX). In September 2021, this index rating was 92.1. On Aug. 30, it was 108.4.

600 mile EVs including trucks and SUVs
Michigan-based startup Our Next Energy (ONE) this week unveiled a prismatic anode-free battery cell it claims will lay the foundation for 600-mile EVs. The prototype cell will be integrated into a BMW iX prototype later this year as part of a dual-chemistry battery pack. ONE said in a press release that it's aiming for a volume-produced version of the dual-chemistry setup, called Gemini, in 2026 that will enable 600 miles of range "in a wide range of vehicle platforms" including trucks and SUVs.

ONE revealed its 600-mile test iX earlier this year but hadn't yet detailed the chemistries. The startup now says it will pair the anode-free chemistry with lithium iron phosphate (LFP) similar to the kind popularized by Chinese automakers, and now used by Tesla in certain vehicles. The 1007 Wh/L anode-free cells eliminate the need for graphite and manufacturing equipment associated with anodes, enabling cell costs of $50 per kwh at scale, or about half the cost of current lithium-ion cells, ONE claims. Anode-free cells typically have a lower life cycle than conventional lithium-ion cells, which would normally make them unsuitable for automotive use. But ONE claims its Gemini dual-chemistry packs solve that problem with a 90% reduction in cycle and peak power requirements, adding that a proprietary DC-DC converter allows the anode-free and LFP chemistries to be integrated into one pack.

Each chemistry is used for a specific function—LFP for daily driving, and anode-free for long-distance trips. With this arrangement, ONE anticipates a 250,000-mile service life. LFP cells allow consistent charging and reduced demand for difficult-to-source ingredients, but they're a bit heavier and need a boost in cold weather—likely all remedied with this dual-chemistry approach.

ONE appears to be the only entity trying to take dual-chemistry battery packs mainstream, although it's certainly not the only company thinking about it. For instance, Nissan has been working on its own solid-state cells, and within that project it hasn't ruled out combining chemistries within packs.

Drivers of long-range electric vehicles tend rarely to tap into the full range and battery capacity of their EV. So while many startups are betting on faster-charging cells, this approach might prove not only better for automakers but the end user as well.

Get the latest report on trends, market conditions, and the most current information in the industry
Subscribe to Newsletter