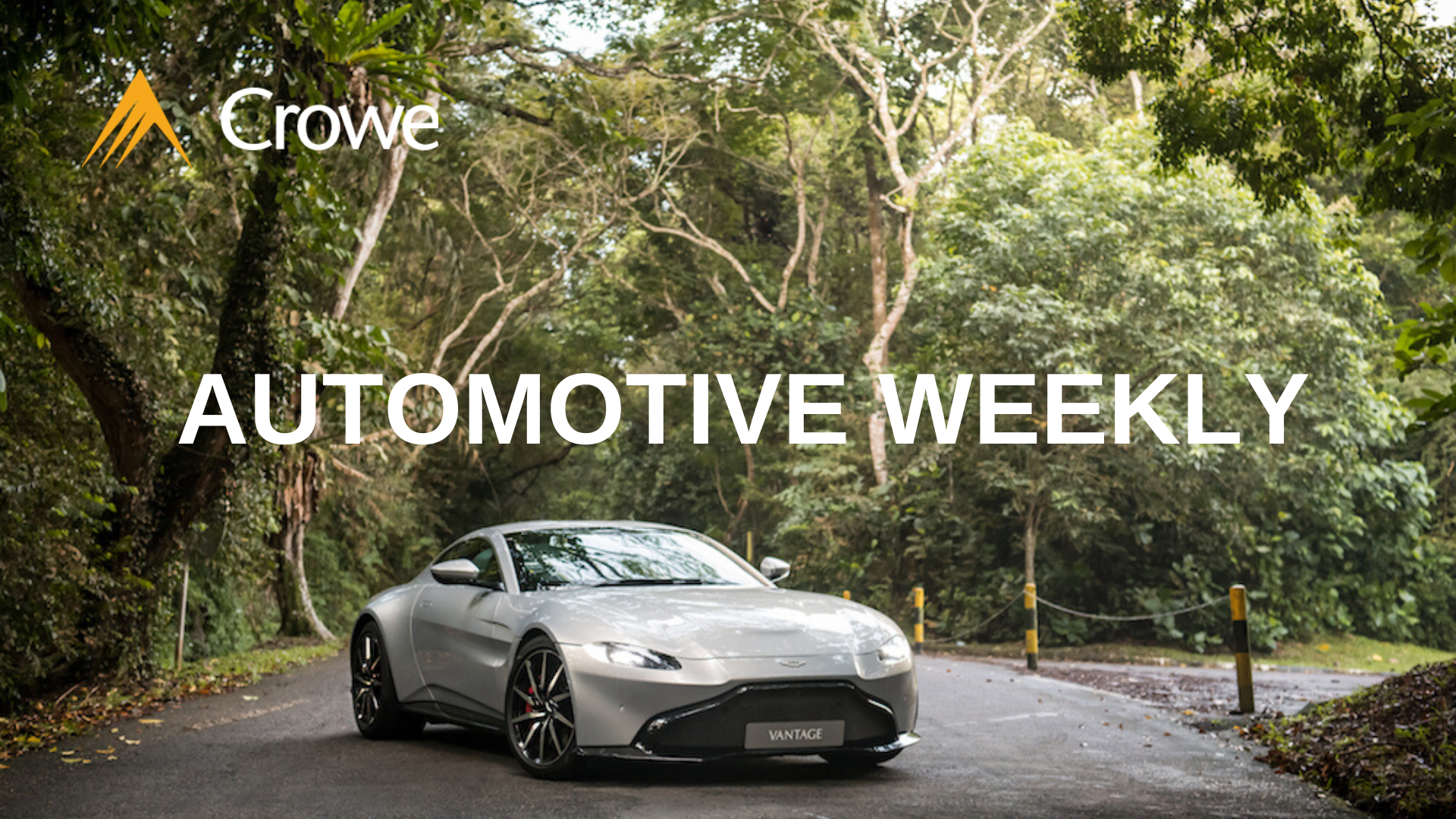 Where Did All the Chips Go?

Freezing weather that interrupted gas supplies in the southern United States and Mexico was wreaking havoc on Thursday with car manufacturing plants on both sides of the border, with Ford saying several of its assembly plants have been shut. The cold snap has overwhelmed Texas’ power grid, while natural gas supplies to Mexico from Texas were interrupted, leaving millions without power in Mexico’s industrial northern states earlier in the week.

Ford Motor Co. is mobilizing its dealer network in Texas to help those affected by widespread power outages during unusually frigid weather. The automaker on Thursday sent a letter to retailers in the state asking them to loan 2021 F-150 pickups from inventory to residents without electricity so they can use the trucks' onboard generators to power homes. Ford is offering the dealers $600 more than normal to put any F-150 with the Pro Power Onboard feature into loaner fleets.

Toyota Motor Corp said Thursday it is investing $210 million to expand engine production in West Virginia and add 100 new jobs. The Japanese automaker said it would boost capacity by 70,000 engines a year at the Buffalo, West Virginia plant, up from the nearly 1 million transmissions and engines it produces annually for vehicles assembled in North America. The investment will increase assembly capacity of its four-cylinder engine line. The plant makes four- and six-cylinder engines for Avalon, Camry, Corolla, Highlander, Lexus ES, Lexus RX350, RAV4 and Sienna.

WHERE DID ALL THE CHIPS GO?

The semiconductor crunch that has battered the auto sector leaves carmakers with a stark choice: pay up, stock up or risk getting stuck on the sidelines as chipmakers focus on more lucrative business elsewhere. Car manufacturers including Volkswagen, Ford and General Motors have cut output as the chip market was swept clean by makers of consumer electronics such as smartphones - the chip industry’s preferred customers because they buy more advanced, higher-margin chips.

Porsche’s chief executive warned on Monday that the German luxury automaker’s daily operations could be affected over the coming months by a “very serious” global semiconductor shortage. “The semiconductor topic is a very serious one because the whole industry is affected because of the big demand of consumer electronics and the faster return of the automotive sector,” Oliver Blume, chief executive of Porsche, told CNBC’s “Squawk Box Europe” on Monday.

The global semiconductor shortage will slash earnings at General Motors Co. and Ford Motor Co. by about one-third this year as supply constraints hamper production and profits, Moody’s Investor Service estimates. The chip shortage will materially erode margins and could lower expected earnings before interest and taxes by as much as $2 billion for GM and $2.5 billion for Ford, the ratings agency said in a note published Tuesday. GM’s EBITA margin could fall to 3.4%, while Ford’s could dip as low as 1.8%, according to Moody’s.

General Motors Co. is betting its future on electric cars. By mid-decade it plans to spend $27 billion on manufacturing 30 electric models and developing driverless cars. By 2035, it expects to have phased out gasoline-engine options completely and to be selling only electric vehicles, a technology that currently generates about 2% of sales and no profit for the company. Planning for this transformation at the factory level is the responsibility of Gerald Johnson, a GM lifer who took over global manufacturing operations in 2019, and who is spearheading a $2.2 billion gut rehab of a factory in Detroit, recently renamed Factory Zero, to serve as GM’s electric-vehicle hub.

CANADIAN DEALERS HAVE LONE STAR IN THEIR EYES

Everything is bigger in Texas, as the saying goes. And some Canadian dealership groups are crossing the border to get a piece of the state's fast-growing markets. In December, Steele Auto Group of Dartmouth, Nova Scotia, acquired two Chrysler-Jeep-Dodge-Ram dealerships in Texas, which followed the purchase of a Chevrolet-Buick-GMC store outside San Antonio earlier in the year. Foundation Automotive Corp. of Calgary has expanded rapidly into the U.S. since forming in 2017, with seven new-vehicle dealerships and a national headquarters in Texas.

Nikola has released new details and an updated timeline for the introduction of its electric semi-trucks. The Arizona-based automaker plans to launch production of a battery-powered version of the Nikola Tre Cabover tractor aimed at local and regional operation with a range of 300 miles late this year and will follow it in 2023 with a hydrogen fuel cell version for longer trips that can cover 500 miles between fill-ups.

The fuel cell combines stored hydrogen with atmospheric oxygen through a chemical reaction that generates electricity without any onboard emissions and the hydrogen tanks can be refilled much quicker than a battery with the same amount of energy storage can be charged. In 2024 the company will begin deliveries of the Nikola Two FCEV sleeper cab tractor designed for long-haul trucking on America's open roads that features a fuel cell powertrain with a range of 900 miles, which is 150 miles more than originally advertised.

Nikola is building a hydrogen refueling network for its customers to facilitate the use of its vehicles and will utilize General Motors' Hydrotec fuel cell powertrain technology in its vehicles.

The company has been reworking its business plan since founder Trevor Milton stepped down from his position as executive chairman last fall amid allegations of fraud from short-seller Hidenberg Research.

There's a big difference between dealers starving for supply and avoiding the chronic overproduction that pushed the Detroit 3 into destructive price-slashing cycles. Automakers say shortages of hot products will eventually get worked out and that they have the ability to keep stocks trimmer than in the past, thanks to better data and more efficient labor contracts that don't force them to keep plants running regardless of need. But it might require some adjustment for dealers, who fear losing business to a rival down the street if they don't have the exact color and configuration a customer wants.

A division of Magna International plans to open a facility in the city of St. Clair to build battery enclosures for the 2022 GMC Hummer electric pickup, which will be produced at General Motors' Factory Zero in Detroit and Hamtramck, according to the office of Gov. Gretchen Whitmer. The $70.1 million investment is expected to create 304 jobs, and was approved Tuesday for a $1.5 million Michigan Business Development Program grant, which is based on job creation targets, according to a briefing memo.

Ford Motor Co’s Chief Executive on Wednesday called on the U.S. government to support battery production and charging infrastructure development, as he outlined the automaker’s plan to develop electric platforms for its top-selling trucks, vans and SUVs. “We need to bring large-scale battery production to the U.S.,” Ford CEO Jim Farley said at a financial conference, adding that he planned to highlight the issue in talks with government leaders.

President Joe Biden issued an executive order Wednesday directing a review of U.S. supply chains with a special focus on key sectors affecting the U.S. auto industry, including semiconductor manufacturing, high-capacity batteries used in electric vehicles and rare earth minerals. The supply chains for these three "critical sets of products" — as well as the supply chain for medical supplies, which struggled with shortages early in the COVID-19 pandemic last year — will be subject to a 100-day review, administration officials told reporters Tuesday evening during a background call.

General Motors executives believe the global chip shortage, which has forced automakers to cut production and close plants, is beginning to improve and are confident the company will hit its earnings targets for the year. GM said earlier this month it expected to earn $10 billion to $11 billion, or $4.50 to $5.25 per share, in adjusted pretax profit this year. It projected adjusted free cash flow of $1 billion to $2 billion for its automotive division in 2021. The forecasts factored in the potential impact of the chip shortage, including a hit of $1.5 billion to $2.5 billion to its free cash flow. That impact remains as GM combats the situation and even partially builds some high-demand vehicles.