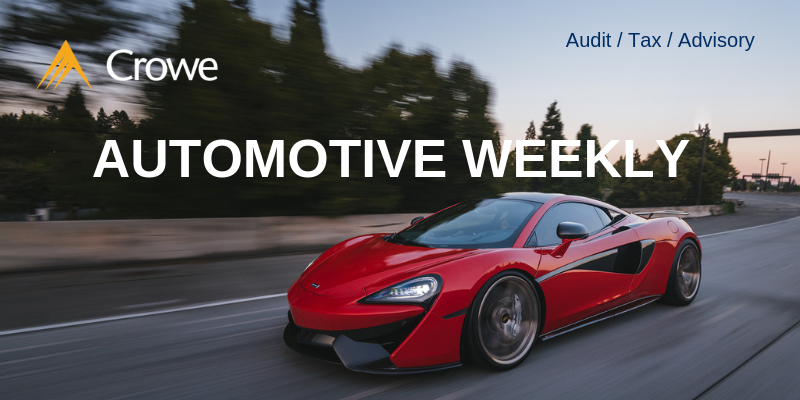 Sales of vans used to transport packages and other internet-ordered items are booming, driven by a continued surge in online shopping and the popularity of free delivery services, auto executives and analysts say. The growth goes beyond Amazon’s network. U.S. sales of cargo vans used in fleet services rose 5% last year and are on pace to jump 19% this year, compared with flat sales in the broader vehicle market, according to research firm J.D. Power.

A Vietnam-based hacking group is learning from China’s playbook, using increasingly sophisticated cyber-attacks to spy on competitors and help Vietnam catch up to global competitors, according to cybersecurity experts.

Big red bows and the “December to Remember” tagline of year-end Lexus ads have become as much a part of the holiday season as lawn ornaments and tacky sweaters. But the upscale brand has less to celebrate this year in the U.S., with sales flat and few new vehicles to showcase. Thirty years after its debut shocked established German automakers, demand for Toyota Motor Corp.’s luxury brand has stalled, with sales on track to trail BMW and Mercedes-Benz. Once the unquestioned leader of the pack, it hasn’t taken the top slot in the U.S. since 2010. Its market share of 13 percent is down from a peak of 18.2 percent a decade ago, according to car-shopping researcher Edmunds. Lexus’s 30th-anniversary brake-tap is a reflection of its aging vehicle lineup, increased competition and an inability to keep pace with American buyers’ growing demand for larger crossovers and utility vehicles. Two of its crossovers haven’t undergone a full model change in a decade, and the addition of a cramped three-row option to its popular RX model in late 2017 hasn’t won over as many cross-shoppers as hoped. “Lexus has lost some of its luster,” said Jake Fisher, senior director of auto testing at Consumer Reports, who points to gains by rivals such as Hyundai Motors Co.’s Genesis brand. “Genesis is taking that baton. They are what Lexus used to be: affordable, comfy and stress-free.”

Toyota executives and dealers say the pause will be temporary ahead of a product blitz over the next two years. Noting that Lexus's sales are “about flat” this year, Bob Carter, Toyota’s top sales executive in North America, told reporters earlier this month that a refreshed version of Lexus’ top-selling RX is on its way as a prelude to more vehicles headed for U.S. showrooms. “A lot of new product is coming this way for Lexus down the road,” he said. Lexus pioneered the luxury crossover when the RX debuted in 1998, but it hasn’t kept up with growth in the increasingly crowded segment. The mid-size GX and larger LX ride on antiquated chassis with dated interiors and infotainment displays. Both vehicles also have subpar fuel economy and limited cargo room compared with rival vehicles like the Audi Q7, BMW X7, Mercedes GLS, and Volvo XC90. “We know 2019 was a year that we missed it,” Paul LaRochelle, general manager of a Lexus franchise in Annapolis, Md., and chair of the brand’s dealer council, said in an interview. “We will see Lexus making significant gains in the market over the next two, three, four, five years and beyond.”

Lexus’s plans include long-awaited updates to existing crossovers and at least one all-new mid-size crossover, he said. “The best way to put it would be a luxury seven- or eight-passenger people-mover.”

Jason Shelton, a 42-year old general manager at a telecom company, wants to upgrade his RX to a larger vehicle but says the outdated styling of Lexus crossovers is a turnoff. “Frankly, we’re hoping it is updated by the time the lease is up next year so we can get the bigger vehicle. Otherwise, we will probably move to a different company,” the Nashville-area resident said.

By some measures, Lexus remains the brand to beat. Three of its vehicles rank among the top 10 most reliable models in an annual Consumer Reports survey (the Toyota brand has three more), and J.D. Power named it the top brand for resale value. Lexus sold its 10 millionth vehicle this year, a testament to its success over other Japanese luxury brands like Nissan Motor Co.’s Infiniti and Honda Motor Co.’s Acura, whose cumulative worldwide sales total 2.6 million and 5.4 million, respectively.

Once mostly geared for the U.S., Lexus has increasingly become a global brand with rapid growth in China and Europe, where small crossovers dominate sales. Its most recent vehicle premieres took place in those two markets, including the UX compact crossover last year in Geneva and an electric-powered variant -- the brand’s first EV -- last month in Guangzhou. That has raised questions among some dealers and brand watchers about whether the U.S. now takes a back seat to other markets when it comes to investment priorities and vehicle development. “It’s definitely been a slow time for the brand, and that’s what happens when you don’t have product to talk about,” said Kevin Watts, editor of the influential fan blog Lexus Enthusiast.

Lexus officials say the U.S. market has not been forgotten by executives in Toyota City. “Behind the curtain right now, what’s going on is that everything -- all the attention -- in Japan is to get Lexus back in the game with a tremendous lineup over the next few years,” said LaRochelle of the dealers’ council.

Those assurances from top Toyota officials came during an October meeting in Washington, where dealers said the vehicle highest on their wish list is an 18-foot long utility vehicle akin to General Motors' GMC Yukon Denali XL. “That is one of our primary asks and one that they’re looking at,” LaRochelle said.

A healthy portion of buyers sprung for the high-powered GT trim, too.

Despite the car's controversial name, reservations for Ford's Mustang Mach-E electric crossover are flying off the proverbial shelves. From standard range models to the top-tier GT performance trim, the divisive "icon"—Ford's words—has proved pretty popular to this point. In a short release, Ford even confirmed that pre-orders for the First Edition have already sold out.

The First Edition Mach-E is available in three colors: red, gray, and that bright blue that appears in much of this car's marketing. Three guesses as to which one is most popular among the resale-value obsessed buying public. Thirty-eight percent of the limited edition crossovers will be painted Carbonized Gray while Grabber Blue and Rapid Red account for 35 and 27 percent of the build slots, respectively.

Other Mach-E pre-order statistics include all-wheel drive being selected on 55 percent of the initial production pie as well as the Extended Range Battery being equipped on over 80 percent of U.S. orders, an option that gives the Mach-E around 300 miles of range. Standard-range examples are expected to boast a single-charge range somewhere in the low-200 miles. Ford also says that 30 percent of American buyers are shelling out for the $60,500, top-trim GT version that can apparently hit 60 mph somewhere in the mid-three-second range. For comparison's sake, Select, Premium, and First Edition Mach-Es will apparently do the sprint in the mid-fives while the more relaxed California Route 1 model clocks in somewhere in the mid-sixes.

Speaking of California, Ford adds that over a quarter of all Mach-E orders are coming from the Golden State.

WHY SUVS ARE GETTING BIGGER & BIGGER

Just when you thought sport-utility vehicles couldn’t get any bigger, they are. Two of the auto industry's most hulking SUVs, the Chevrolet Tahoe and Chevrolet Suburban, are growing in size for the 2021 model year. For customers, that means more headroom, more legroom, and more space to haul stuff. For automakers, that means more profits because large SUVs are among the industry’s biggest moneymakers, rivaled only by full-size pickups, which are also getting bigger.

South Korea’s Hyundai Motor and affiliate Kia Motors turned in their lowest sales in seven years in 2019 as business in China slumped, missing their target for a fifth straight time, but forecast better numbers for 2020. Weak 2019 sales underline the challenges Hyundai Motor Group has been facing, including a string of annual profit declines at Hyundai and higher costs to develop future technologies even as the global auto market stagnates. Hyundai and Kia reported a 3% drop in their combined global sales to 7.19 million vehicles for 2019, falling short of their target to sell 7.6 million vehicles.