Are American consumers ready to buy a car at a shopping mall? The company that owns Mall of America in Minnesota and American Dream in New Jersey said it is in discussions with potential auto-retail tenants for its massive shopping and entertainment centers. Triple Five Group, based in Edmonton, Alberta, has already drawn a Toyota dealership to its West Edmonton Mall, a high-profile theme-park retail venue in Canada. While the explosion in online shopping has challenged shopping centers across North America — Triple Five disclosed that it lost $64.3 million on American Dream last year — partnerships between dealerships and malls could reap cross-marketing opportunities, according to retail experts.

When General Motors Canada and UNIFOR announced last year that they’d wrestled the Oshawa plant from the dustbin, it seemed like one of those headlines that could disappear into the ether. Instead, great news. As they retool for the coming product launch of new trucks set to roll off the line in early 2022, GM has put out the call for hiring. 1600 jobs are up for grabs, for what the company calls a “highly motivated and diverse workforce.” “Available positions include 1,500 production line workers for positions starting at an hourly wage of $23 per hour; 110 certified electricians starting at $43 per hour; and 60 certified industrial mechanic-millwrights for immediate positions starting at $43 per hour,” they report. These positions are full-time, permanent and pensioned, with premiums for shifts and overtime. These insured positions could top out at $100,000 per annum in some skilled trades, an oasis in a desert of bad news of late.

The plant will be building full-sized trucks, those that are in heavy demand across North America, with the manufacturer making a $1.3 billion investment. They are also recruiting for management positions, and you can apply through this site.

There are offshoots to this announcement, meaning employment in companies farther down the food chain. “We are very pleased to announce that General Motors has chosen TFT Global Inc. as the successful recipient of the Logistics Optimization Services business in Oshawa, Ontario for the GM T1XX Truck beginning October 2021,” they say in a release.

Volvo Cars on Wednesday concluded a nearly four-year effort to make its oldest and most productive car plant climate neutral. The Torslanda factory, near Gothenburg, which produces about 300,000 vehicles annually and opened in 1964, is the Swedish automaker's first vehicle assembly plant to achieve climate neutrality. For Volvo to reach this level a plant must register "no net increase in the emission of greenhouse gases to the atmosphere" as a result of electricity and heating usage, the company said.

NO QUICK RELIEF FROM MICROCHIP SHORTAGE FOR AUTOMAKERS

Global ratings agency Fitch warns the current global shortage of semiconductors is expected to continue – a major worry for automotive manufacturers and traders seeking to ramp up production as COVID-19 declines, especially as vehicles become ever more reliant on microchips. Fitch’s prediction that chip markets will remain tight, “intensifying and likely extending the current cyclical upturn into next year” comes as the U.S.-based Semiconductor Industry Assn. (SIA) has said worldwide sales of semiconductors totaled $123.1 billion during Q1 2021, up 3.6% from Q4 2020 and up 17.8% up year-on-year. This is because of increased orders from sectors such as home electronics, 5G and cloud services, as well as a rebounding auto sector.

With supply chains stretched to their breaking point, Germany's carmakers are developing an early-warning system to better prepare for the next crisis, after a drought of semiconductors brought vehicle assembly lines to a screeching halt the world over. Dubbed "Catena-X" after the Latin word for chain, this cloud-based network is designed to illuminate every corner of the industry's vast, globe-spanning web of automotive parts suppliers in the search for stresses. Data would be shared safely via a central repository that any participating firm can tap into, thanks to one common interface.

THE U.S. CAR MODELS MOST IMPACTED BY THE MICROCHIP SHORTAGE

A report by AutoForecast Solutions covered by Car and Driver has shed light on just how badly North American automakers have been impacted by the microchip shortage. It has caused Ford to take 346,616 vehicles out of production while General Motors has reduced its production total by 277,966. When it comes to the models most impacted by the shortage, the Ford F-Series pickup comes first on the list with 109,710 units fewer planned for production. 98,584 fewer Jeep Cherokees are planned while 81,833 fewer Chevrolet Equinoxes are in the pipeline. Unfortunately, there is no light at the end of the tunnel for hard-pressed carmakers with Intel CEO Pat Gelsinger remarking earlier this week that the problem could take a couple of years to resolve.

HOW LONG WILL MY BATTERY LAST? CALIFORNIA PROPOSES DEGRADATION LIMITS

How long will the battery in this used EV last? Given how quickly the batteries in smartphones and laptops deteriorate, it’s easy to see why used EVs can be a cause for unease.

Those buying pre-owned EVs—perhaps even more than the original buyers—need to have confidence they can replace gasoline vehicles with electric vehicles that come close to their original rated range and performance. And those who choose to keep driving the EV they bought new shouldn’t face a dramatic degradation in usefulness after seemingly normal use.

Because a long battery life is so important in realizing the environmental benefits of EVs, regulators are stepping in. Provisions for defining EV battery health are part of the Advanced Clean Cars II framework that the California Air Resources Board (CARB) presented for the first time earlier this month—a measure that aims to make EVs 80% of new light vehicle sales by 2035.

The rules, applying to the 2026 model year and beyond, would require that BEVs maintain 80% of their certified test-cycle range for 15 years or 150,000 miles, while fuel-cell models maintain at least 90% output power after 4,000 hours of operation.

The requirements would also include the explicit disclosure of that percentage threshold and a “customer readable state of health metric,” according to the CARB draft. The state of health (SOH) needs to be readable by the driver without a tool and meet the “usable battery energy” as met by SAE J1634 standards, with the vehicle maker clearly laying out the SOH percentage that qualifies for warranty repair.

Under the new rules, warranties for the batteries in BEVs would also be required for 10 years or 150,000 miles—the same duration of a defects-and-performance warranty already required of batteries in plug-in hybrids according to current CARB rules. Nothing like this exists today in the U.S. for battery electric vehicles. And the ramifications extend not just to those who drive EVs but those who potentially repair them.  Aiming perhaps at making sure maintenance is accessible, the rules would require “information disclosure for all propulsion-related components,” with standardization for communicating with the vehicle and reading propulsion-related fault codes. 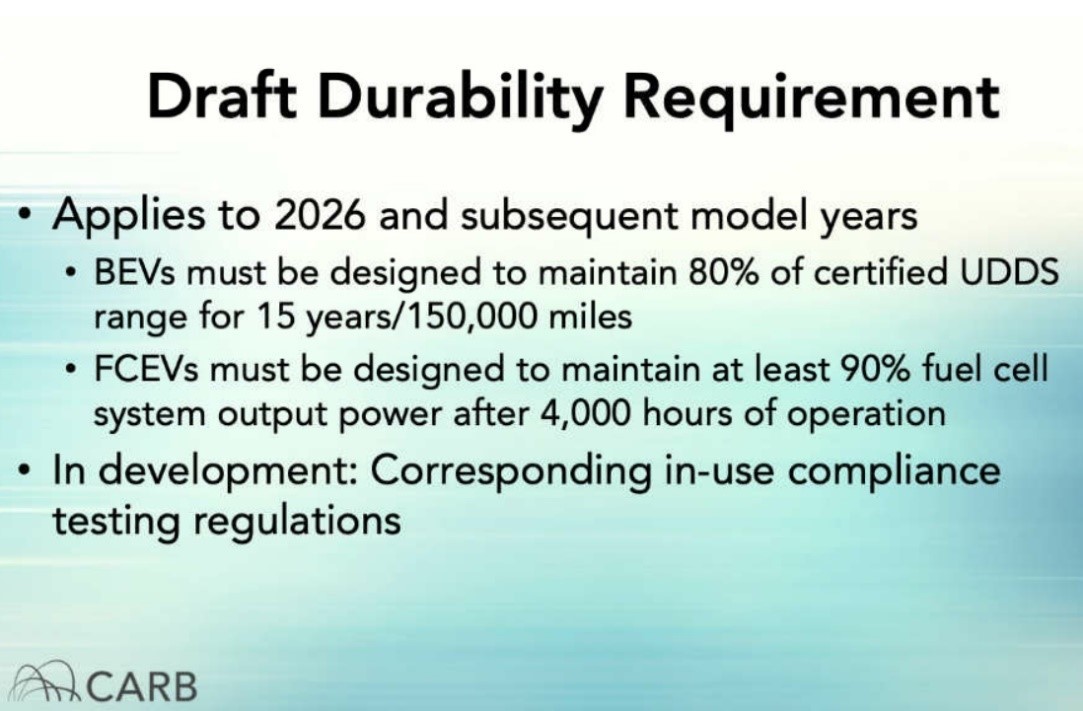 CARB’s battery rules make sense. As battery cell manufacturing is especially carbon intensive, a vehicle is likely to have a lower carbon footprint over its lifetime if the battery pack lasts the entire lifetime—and, perhaps, has a second-life purpose in energy storage or industrial equipment.
David Reichmuth, the senior engineer in the Clean Transportation Program at the Union of Concerned Scientists, sees that the proposal serves both as a consumer protection and an environmental assurance. California, he says, “has an interest in making sure that EVs are capable, and that consumers don’t have concerns over buying a used EV and being able to replace a gasoline vehicle.”

The consumer advocacy organization Consumer Reports appears to agree with the latter sentiment. “CR welcomes the new electric vehicle durability requirements to ensure consumers have access to long-range, long-lasting vehicles,” it said in response to the rules proposal.
According to Reichmuth, it all comes back to ensuring longevity for the batteries and helping make sure we get the most benefit out of the vehicles.

Simply put, there are increased emissions in making a battery electric car versus a gasoline one, but those emissions are offset pretty quickly by the emissions savings in using the EV. “The longer we use that electric car, the more savings we can accrue,” he said.

BMW RETURNS FUNDS TO DEALERS TO FINANCE EV SET UP

BMW has a plan to help its dealers cover the big expense of tooling up to sell electric vehicles and equipping showrooms and service departments with vehicle chargers. While some automakers have required dealers to shoulder those new costs, BMW will help finance the investment from an existing retailer-funded program that pays for dealer-based initiatives, technology and training. The brand's 349 U.S. dealers already pay a flat fee into the Cost Per Vehicle fund on every vehicle they order from the factory.

Toyota Motor Corp. may shift electric-vehicle production to the U.S. if demand continues to grow, a top executive said, the latest sign that the Japanese carmaker is joining peers in embracing the technology. Toyota would consider production at an existing or new factory in the U.S. in response to a sustained increase in American consumers’ appetite for battery-powered vehicles, Bob Carter, the company’s executive vice president for sales in the U.S., said in an interview Wednesday. The automaker has no current plans to invest in U.S. EV production, he said, and he didn’t specify what sales threshold would justify such a move.