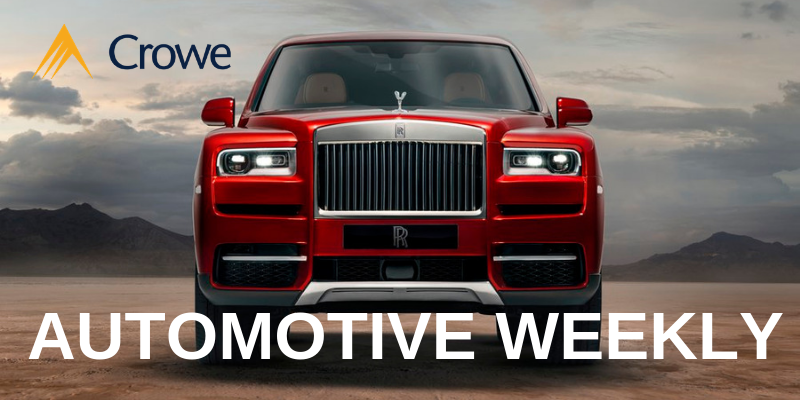 Automakers' aggressive product launch cadence over the next few years, normally a sign of a strong industry, could be a detriment in the near term as the coronavirus pandemic hampers demand, according to the annual "Cars Wars" study of the U.S. product pipeline. John Murphy, a senior auto analyst at Bank of America Merrill Lynch, said he expects automakers to launch roughly 250 new models over the next four years. That averages out to 63 per year, well above the average of 40 over the past two decades.

In the middle of California’s lockdown, Mike Sullivan sold 160 cars in a week by delivering online orders to customers’ doorsteps. Even though that total meant sales plummeted about 75% at his 12 dealerships in the Los Angeles area, Sullivan had reasons to be encouraged. He hustled to set up e-commerce after the state ordered the closure of many retailers, including car lots, and customers liked the new model. But since California loosened its coronavirus restrictions in May, shoppers have come back to Sullivan’s showrooms. Not even recent protests over police brutality and looting, which hit three of his stores, kept them away.

STUDY: GM WILL LOSE US MARKET SHARE AS IT REDEFINES ITS FUTURE

General Motors is risking its U.S. market share in a long-term play to offer an all-electric vehicle lineup. But it is the smart play for GM's future, experts say, especially if federal fuel economy regulations increase or gasoline prices drive higher. That was a conclusion laid out Thursday by John Murphy, senior automotive analyst at BofA Securities, during a presentation of its annual Car Wars report.

Ford Motor Co. is canceling plans to build the next-generation Edge, a move that bodes ill for the automaker’s Oakville, Ontario, assembly plant, a key source for Ford and Lincoln crossover output, according to AutoForecast Solutions, a U.S.-based global forecasting and consulting firm. “Unless Ford decides on a different program to replace the Edge, there’s no future for Oakville,” which employs 4,200 hourly workers, said Sam Fiorani, vice president of global forecasting at AutoForecast Solutions.

Ford Motor Co. declined to comment. Last year, Ford ended production of the Ford Flex and Lincoln MKT crossovers at the Oakville plant, and, according to Fiorani, the automaker plans to shift output of the Lincoln Nautilus to China in 2023. As Ford’s final Canadian-built vehicle, the Edge’s cancellation puts the Oakville plant at risk of closing, Fiorani said. Ford’s Unifor labor contract covering the Oakville plant, as well as two engine plants in Windsor, Ontario, expires in September. After negotiating the closure of a Romeo, Mich., engine plant, the two Canadian engine plants were to be the only sources of the automaker's 5-liter and PV-8 family of V-8 engines, Fiorani said in a video report posted Sunday.

The next-generation Edge was supposed to have been launched in June 2023 on a new platform, said Fiorani. But tepid retail sales as well as an increasingly crowded midsize crossover segment, with new or planned entries from Chevrolet, Honda and Toyota, contributed to Ford’s decision to cancel the new program, he said. “The Edge is more of a fleet vehicle, you don’t see many of them in people’s driveways, but they still sell 150,000 a year in North America.” U.S. sales of the Edge last year tallied 138,515, up three per cent..

The Edge is also being squeezed out by Ford’s upcoming slate of new utilities, including the Bronco, Bronco Sport and the updated Escape. “All those new models and a couple of others that are EVs and non-EVs coming over the next three to five year are all filling in the same space [as the Edge],” said Fiorani. Although the Oakville plant is the global source for the Edge, European sales have not met company expectations, he added. The vehicle is also produced in China, however there is no indication yet that Ford will be canceling the vehicle’s overhaul for that market, said Fiorani.

Ford’s decision could be a ploy for Detroit 3 contract negotiations set to being in the fall, said Fiorani. “The cards that Unifor holds is that Ford has two engine plants in Windsor, Ont., that are very key to the Super Duty, and the Super Duty is very key to Ford’s profit,” he said.

With the planned closure of the engine factory in Romeo, Mich., the Windsor plants are expected to become the sole source for the large engines that power the F Series trucks and Ford Mustang, said Fiorani.

It wouldn't be the first time AutoForecast Solutions was correct about the demise of a Canadian auto assembly plant. It previously forecasted the end of vehicle assembly at GM Oshawa.

Not even a global pandemic can stop Americans from buying their beloved pickup trucks, apparently. While sales of passenger cars and SUVs have fallen sharply, pickup sales have held up surprisingly well as Americans take advantage of low-interest financing offers and refuse to let economic concerns stop them from getting the vehicle they've had their sights set on. With the coronavirus pandemic raging, sales of passenger cars plunged 48.6% in the three month period from March through April, compared with a year earlier, according to car-research service Kelley Blue Book. At the same time, sales of SUVs fell 36.6%.

Italy is close to approving a 6.3 billion-euro ($7.1 billion) credit facility for Fiat Chrysler Automobiles, setting the stage for Europe's biggest government-backed financing to an automaker since the start of the coronavirus pandemic, according to people familiar with the matter. The guarantee still needs a signoff from Finance Minister Roberto Gualtieri after accounting offices at his ministry approved the terms, the people said. It will then need to be green-lighted by Italy's state auditor.

An approval by the minister is expected as early as this week, the people said. A spokesman for the minister as well as a spokesman for FCA declined to comment. The financing will be used exclusively for the automaker's Italian activities, FCA has said. The company will use the funds for workers' salaries, to pay suppliers and for planned investments at domestic facilities.

Registrations fell 57 percent in Europe in May after a 78 percent drop in April. The exact shape of a potential recovery is still unclear as automakers from Volkswagen Group to FCA prepare to announce results for what likely will be a devastating second quarter.

In the U.S., Ford forecast a $5 billion operating loss for the three months through June.

FCA burned through $5.5 billion in the first quarter, and the company and French peer PSA Group last month scrapped a plan to pay out 1.1 billion euros ($1.2 billion) in dividends as part of their 2019 merger agreement.

General Motors and Ford have tapped credit lines to stock up on billions of dollars in cash. In April, Daimler secured a 12 billion-euro ($13.5 billion) credit line and Renault struck a 5 billion-euro ($5.6 billion) loan guarantee deal with the French state.

It seems increasingly clear auto sales aren’t coming all the way back after the pandemic, not any time soon anyway, analysts say. So, manufacturers and auto suppliers are studying which short-term measures they took to survive business shutdowns – such as cost-cutting, layoffs, travel restrictions and efficiency drives – become permanent. “We’ve done without these items the past couple of months; do we really need it? Can we make it stick? That’s ongoing,” says General Motors Chief Financial Officer Dhivya Suryadevara, at the online Deutsche Bank Global Auto Industry Conference.

THE ELECTRIC CAR BATTERY BOOM HAS SCREECHED TO A HALT, FOR NOW

Three decades of advances took lithium-ion batteries from powering handheld Sony camcorders to propelling Tesla’s popular electric vehicles. The rapid rise is facing a major test in the Covid-19 pandemic. Demand for rechargeable batteries will decline for the first time this year, as sales of electric cars—the biggest user—slump with novel coronavirus pummeling the auto industry, according to BloombergNEF forecasts. Battery shipments to carmakers are forecast to fall 14% in 2020, and the effects of the slowdown are seen lingering into next year.

Even before the economy turned bad because of the COVID-19 virus, many automotive consumers who had the wherewithal to buy new vehicles were nonetheless opting for more affordable used ones. So it’s no surprise that pre-owned sales, after sputtering a bit recently, now are outpacing new-vehicle deliveries as the automotive market climbs back from the depths of despair in March and April. “Used-vehicle sales in May were only 5% below pre-virus forecast” compared with 20% for retailed new vehicles, says Larry Dixon, J.D. Power’s senior director-valuation services. “This is a stark improvement from April, and evidence that the used-vehicle market is in recovery.”

The acute phase of the coronavirus crisis has passed for automakers. The chronic phase may be just beginning. No auto maker has gone bust in this recession. None seems likely to either, given the ready availability of cash. The combination of ample central-bank liquidity and a functioning financial system have forestalled the kind of existential drama that rocked the industry in 2009. But this is only good news up to a point. More cash now means more debt later—debt that manufacturers can ill afford, given the mounting cost of new technologies.

Tesla continues to lead the charge for electric vehicle range. The Tesla Model S Long Range Plus sedan has an unprecedented 402-mile rating, the American automaker announced on Monday. The EPA has yet to confirm the rating of the range leader, but in a post on its site, Tesla claims it is "an official EPA-rated range." The 2020 Model S Long Range sedan listed on fueleconomy.gov has a 373-mile range, but there are often lags in what an automaker announces and what the EPA publishes. Tesla once again pushes the electric vehicle farther in range and in acceptance. Less than a decade ago, the launch of the 265-mile Model S broke the range-anxiety barrier. Range anxiety, or the fear of running out of battery capacity in an electric vehicle before reaching your destination, could be overcome with a threshold of at least 200 miles, many experts predicted at the time. Back in those days, the Nissan Leaf had an EPA-rated 73-mile range.

The 402-mile range of the Model S Long Range Plus is another first for Tesla, and represents greater range than many gas cars. With an average fuel economy of 25.1 mpg, according to the EPA for 2018 models, and a rough estimate of a 15-gallon tank (with wide variances between compact cars and pickup trucks), a gas car would travel about 375 miles before needing to refill. The boosted range for the Model S comes from the existing battery pack, but other improvements to vehicle design and performance have made Long Range Plus more efficient, according to Tesla. Weight has been dropped due to lighter seats and drive units, as well as design and manufacturing lessons learned from the compact Model 3 and Model Y, Tesla said. The company did not specify the weight drop from the current Long Range, which weighs a portly 4,883 pounds. Additional improvements include new 8.5-inch-wide wheels paired with tires designed to reduce rolling resistance for a 2% improvement in range. A mechanical oil pump on the rear induction motor has been replaced with an electric oil pump that runs independent of vehicle speed, and an improved regenerative braking system also increases efficiency.

Tesla is the only automaker with a 400-mile range electric vehicle. The Model S Long Range Plus is the most affordable Model S at $76,190, including a $1,200 destination fee. The Performance variant with a 348-mile range starts at $96,190.