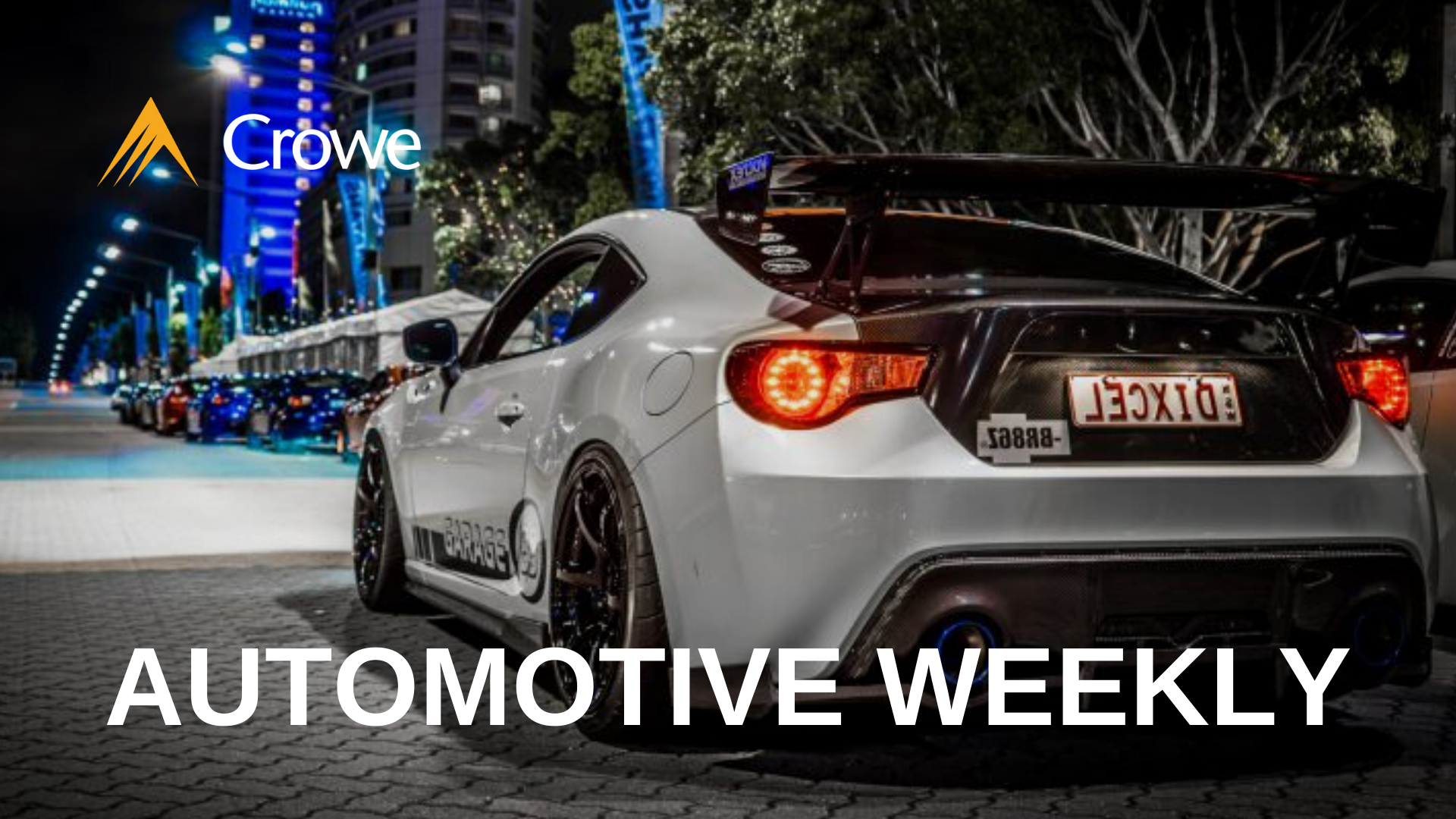 The new CEO and president of Volvo Cars has predicted that scarcity of battery supply will become a pressing issue for his sector, telling CNBC the firm has made investments that would help it gain a foothold in the market. “Recently, we made a reasonably substantial investment with Northvolt, so that we are in control of our own battery supply as we go forward,” Jim Rowan, who joined the business last month, told CNBC’s “Squawk Box Europe” Thursday. In March 2021, Volvo Cars said it planned to become a “fully electric car company” by the year 2030, a move which will require it to have a consistent and secure supply of batteries for its vehicles.

Ford Motor Co confirmed late on Thursday it will halt production next week at its Flat Rock plant where it assembles the Mustang because of a shortage of semiconductor chips. The No. 2 U.S. automaker had previously said it had planned to idle the plant for two days this week. Automotive News reported the production cuts earlier. Ford said on Wednesday it had built about 53,000 vehicles but not shipped them as they awaited final parts held up by the chips shortage.

The head of carmaker Stellantis does not expect improvement in the semiconductor supply chain before next year, he said on Friday. "Semiconductor supply is still very short, the situation is very similar to that of 2021. I would say 2022 would not bring a major improvement," Chief Executive Carlos Tavares said at an event in Como to promote Alfa Romeo's new sport utility vehicle (SUV), the Tonale.

There has been a sharp increase in the number of catalytic converters being stolen across the country, resulting in vehicles stacking up in dealership service departments as customers endure costly and lengthy repairs and manufacturers, police and legislators search for a way to curb the thefts. The National Insurance Crime Bureau said there were 14,433 catalytic converter thefts reported in the U.S. in 2020, the last year figures were available. That's a fourfold increase from 3,389 theft cases reported in 2019. In 2018, there were just 1,298 thefts reported. Officials hinted that 2021 figures could show a dramatic increase.

American Honda Motor Co. is reassessing how much brick-and-mortar space its dealers will really need in the future to sell vehicles in an era of smaller inventories and digital retail. Automakers have been known to pressure their retailers to invest in bigger, flashier dealerships. But American Honda is wondering if its dealers might need some facility relief, triggered by the challenges riddling the automotive industry. Honda is “re-looking at our facility requirements,” Dave Gardner, American Honda's executive vice president for national operations and sales, told Automotive News.

Stellantis has agreed to buy the Share Now car sharing business from BMW and Mercedes-Benz as the two German groups focus more on the software part of their mobility alliance. Formed last year through the merger of Fiat Chrysler and Peugeot maker PSA, Stellantis wants to become a global leader in car-sharing, using this acquisition announced on Tuesday to expand its existing business in the area.

Toyota Motor Corp. is inching closer to using up a key U.S. tax credit for hybrid and electric vehicles, a milestone the automaker argues will raise its costs and hinder adoption of climate-friendly cars. Current law allows automakers to offer a $7,500 tax credit to buyers of fully or partly electric cars, but only up to 200,000 per company. Demand for Toyota’s plug-in hybrid vehicles has steadily grown, especially as gasoline prices have surged past $4 a gallon, pushing up its cumulative sales of eligible vehicles to 183,000 as of the end of 2021, according to an analysis by BloombergNEF. The company reported sales of another 8,421 plug-in hybrid and electric cars in the first quarter.

Porsche AG, planning for rapid electric-vehicle sales growth in this decade, said it has taken the lead on a $400 million funding round for Group14 Technologies, a provider of silicon-carbon materials for EV batteries. Porsche led the Series C round and was joined by other financial and strategic investors including Canada's OMERS Capital Markets and BlackRock-backed Decarbonization Partners, according to a Wednesday statement.

General Motors and Inrix Inc. have partnered to provide safety solutions and data to U.S. transportation officials at various levels, the companies said Wednesday. The product, Safety View by GM Future Roads & Inrix, is a cloud-based application that provides transportation officials — such as local and tribal governments, metropolitan planning organizations and other road authorities — with safety insights.

Aston Martin Lagonda on Wednesday named former Ferrari NV boss Amedeo Felisa as its new chief executive officer as the British luxury carmaker works on emulating the Italian carmaker's success and electrifying its brand. Felisa will take over with immediate effect from Tobias Moers, who joined the company in 2020 from shareholder Mercedes-Benz's high-performance AMG brand and served as CEO and chief technical officer.

BMW AG said earnings rose 12% in the first quarter even as the war in Ukraine and Covid-lockdowns in China disrupted the automaker’s supply chain. Group earnings before interest and tax rose to 3.39 billion euros ($3.6 billion) in the first quarter, the company said Thursday, exceeding analyst estimates of 2.9 billion euros. BMW confirmed the outlook for the year that it outlined in March, when it said Russia’s invasion of Ukraine will push down automaking returns to between 7% and 9%. That’s slightly less than the 8% to 10% range it had estimated before the war broke out.

Stellantis NV’s sales jumped in the first quarter on the back of strong vehicle prices and a range of new models like the Jeep Grand Cherokee even as shipments dropped due to supply-chain issues. The maker of Ram and Fiat brands said net revenue rose 12% to 41.5 billion euros ($44.1 billion), the company said Thursday. Stellantis said positive currency effects also padded out the result while the carmaker stuck to an annual goal of a double-digit margin on adjusted operating income.

VW WANTS TO STEP UP INVESTMENT IN U.S. MANUFACTURING

Volkswagen AG VOW said it is accelerating its push into key U.S. auto markets where it expects little impact on growth from the Ukraine war or China’s Covid-19 lockdowns. VW CEO Herbert Diess told reporters during an earnings call on Wednesday that the company wants to boost electric-vehicle investment in North America in particular as the fallout from the war and the pandemic continue to weigh on growth in other regions. “We see that America will be untouched by what’s happening in Europe, so it should be geostrategically a region in which we should invest more,” Mr. Diess said.

As it gets ready to deliver the first F-150 Lightning electric pickup trucks to customers, Ford has confirmed pricing for the trucks' home backup power system hardware.

Customers wanting to use their pickups as a backup power source will first need the Ford Charge Station Pro, Matthew Stover, the automaker's director of charging and energy services, said in a LinkedIn post. The 80-amp Charge Station Pro comes with versions with the Extended Range pack, but it's $1,310 additional for those with the Standard Range pack.

Then, customers will need the Home Integration System, which connects to the Charge Station Pro. The $3,895 system includes inverter, disconnect switch, and a battery pack (yet unspecified) to allow the functionality. When the power goes out, the system automatically switches over from the grid and begins drawing power from the truck.

The Home Integration System will be sold through Sunrun, with installation costs dependent on a customer's individual home setup, Stover noted. Add maybe $2,000 for installation and the full system will cost less than $6,000 for those getting the Extended Range truck.

Practically, it could turn the F-150 Lightning into a home backup power broker—providing some of the function of a Tesla Powerwall, provided the vehicle is home and plugged in. Ford is the only automaker at present that has revealed a full ecosystem to cover that scenario.

With 131 kwh from the Extended Range pack, a Lightning could be enough to provide backup power for large homes for several days. Ford is also studying bidirectional capability, and how such a system might help buffer the grid.