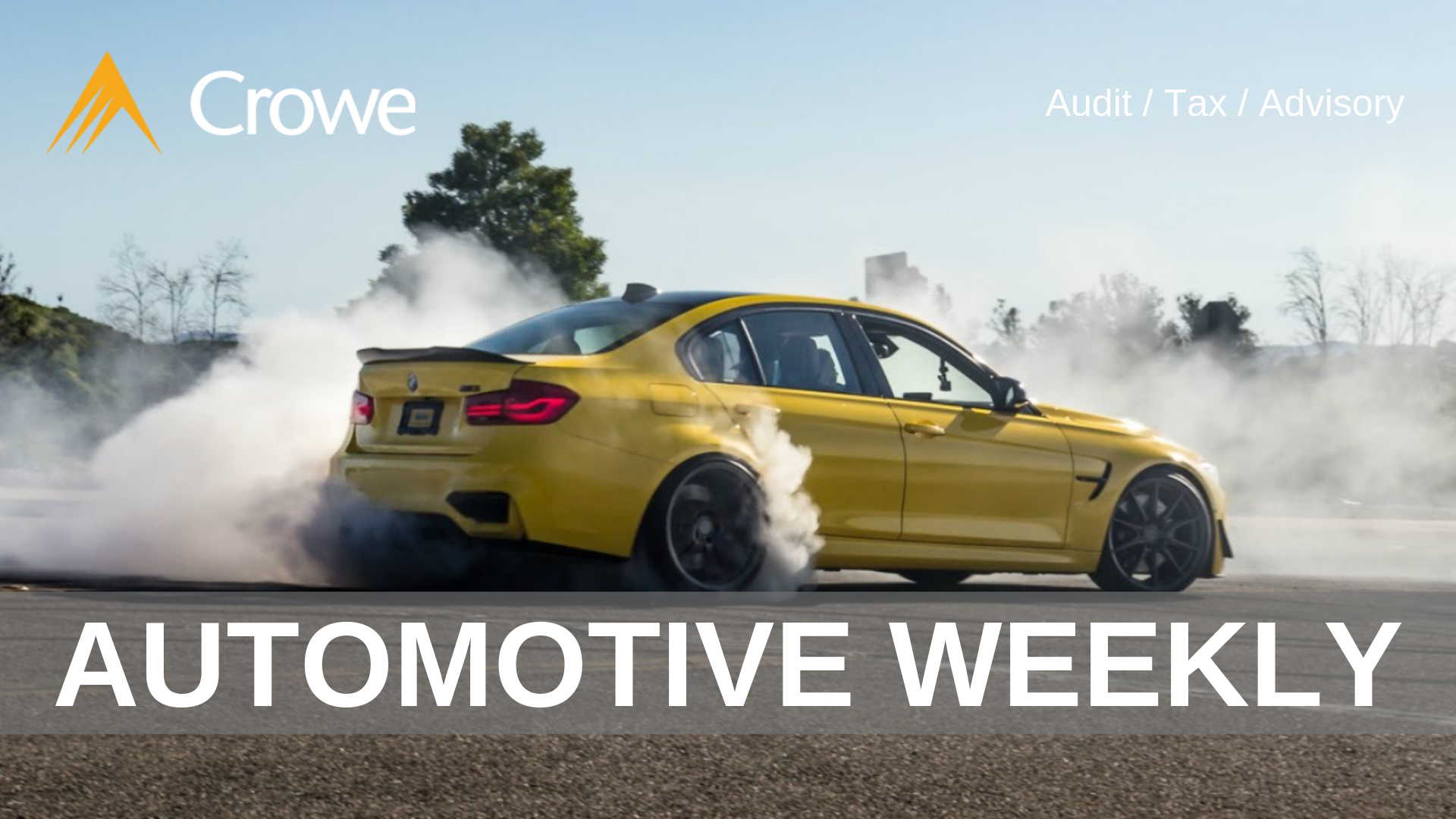 Based on sales data for the first six months of each calendar year dating back to 2013, franchised dealerships are retailing more used vehicles this year than ever. The National Automobile Dealers Association shared that sales trend on Wednesday afternoon as a part of its midyear version of NADA Data 2019, a biannual financial profile of America’s franchised dealerships highlighting major milestones in the retail automotive industry.

The General Motors Co. strike has united the United Auto Workers and their Democratic political allies over demands for more pay and job security. But the walkout also has opened a rift between the union and Democrats focused on a Green New Deal's electric vehicle future. Long supporters of government mpg mandates to force a transition to EVs, the UAW has gotten cold feet as studies — including one from its own research department — show battery-powered vehicle production takes less labor to manufacture.

Jaguar is the latest in a long line of automakers to reveal a virtual concept for the "Gran Turismo" video game, specifically "Gran Turismo Sport." It will be available for download in the game in late

The new Jaguar Vision Gran Turismo Coupe is a battery-electric supercar boasting a 3-motor (one at the front and two at the rear) powertrain delivering a combined 1,005 horsepower and 885 pound-feet of torque, or enough for 0-60 mph acceleration in under 2.0 seconds and a top speed of over 200 mph...in the virtual world. No range estimate was given.

To compensate for the battery, the construction consists of “experimental” lightweight materials such as advanced aluminum alloys. The passenger cell is a carbon-fiber structure, common to many supercars on sale today. The result of the lightweight construction is a curb weight of 3,086 pounds, equally distributed front to rear.

Jaguar describes the concept as the ultimate expression of it's brand's DNA. The sleek silhouette is a modern interpretation of the lines of Jaguar's iconic C-Type and D-Type race cars, while the powertrain links the concept to Jaguar's I-Type Formula E race cars. The car also features a rear ring that extends out of the body and provides the necessary downforce to keep the car glued to the track.

We should also point out that the Long Nose D-Type that made a podium finish at the 1957 24 Hours of Le Mans provided the inspiration for the sound that's piped in for the driver of the Vision Gran Turismo Coupe. Jaguar used new recordings of the D-Type's 3.8-liter engine to create a sample blended in with a distinctive electric soundtrack.

Inside the car, augmented reality is used to provide vital info and the driver also has a virtual assistant named KITT-E to rely on. There also appears to be a gear lever, though Jaguar didn't say what exactly this is for.

Don't hold your breath waiting for a car like the Vision Gran Turismo Coupe to enter production, though we could imagine elements from it appearing on future models from the British brand. The narrow, slit-like headlights are expected to become a feature of future Jaguars, and the sealed-off grille could be a preview of the new design Jaguar is planning for its next EVs like the redesigned XJ due in 2020.

FAIR LAYING OFF 40% OF STAFF

Used-vehicle leasing subscription service Fair says it is laying off 40 percent of its staff and removing CFO Tyler Painter, brother of CEO and co-founder Scott Painter. In an email to Fair staff this week, Scott Painter stated: "As one of the pioneers in automotive fintech, we now need to focus on being a profitable company." "Going forward, Fair will be a smaller team, focused on doing fewer things well," Painter also wrote. "As part of the process of achieving profitability, we’re reducing our headcount across the business."

The Wall Street Journal, citing a person with knowledge of the matter, said the layoffs involve nearly 300 people. Fair uses its subscription model to provide used and certified used vehicles to customers by working with car dealerships. Several investors have shown interest in the Santa Monica, Calif., company since its inception. Fair has raised $385 million in funding led by SoftBank Group Corp.

Fair announced a $500 million credit deal with Mizuho Bank in September as part of an expansion. The deal was expected to bolster Fair's partnership with Uber in providing drivers with access to vehicles for ride-hailing operations, regardless of their credit. Uber sold its unprofitable leasing business to Fair for $400 million in 2018. The Mizuho deal was the third line of credit that Fair had closed in recent months. Previously, it received a $100 million debt facility and minor equity investment from Ally Financial and a $50 million increase to an existing credit line with Silicon Valley Bank this summer.

Ford Motor Co. sold its vehicle subscription service, Canvas, to Fair in a move to bow out of the subscription model, which a growing number of companies have found to be challenging and financially unsustainable.

Kirk Shryoc has been named interim CEO in place of Tyler Painter.

Days before production starts on Volkswagen AG’s cornerstone electric vehicle, the German manufacturer is stepping up a campaign to more than double its market value and gain investor recognition for the industry’s most ambitious technology push. In an internal newsletter sent last week, Chief Financial Officer Frank Witter prodded managers to get behind a goal to reach a valuation of 200 billion euros ($221 billion), arguing that a higher stock price will help VW keep pace with rivals and strengthen its hand in negotiations with future partners. Witter’s message confirms a goal reported earlier this month by Bloomberg.

A merger of Fiat Chrysler and PSA, the No. 2 for car sales in Europe, will create a regional powerhouse to rival Volkswagen AG, and have a stock-market value of about $49 billion — comparable to Japan’s Honda Motor Co. The tie-up will also bring together two auto-making dynasties, the billionaire Agnelli clan in Italy and the Peugeot family of France. Under the current proposal, the Agnelli’s holding, Exor, could become the single biggest investor in the combined entity, one of the people said.

Volkswagen AG lowered its outlook for vehicle deliveries this year on a faster-than-expected decline in auto markets around the world amid economic jitters in Europe and an unprecedented slump in China. The world’s biggest carmaker now expects vehicle deliveries to be flat this year, compared with a previous expectation for a slight rise, the Wolfsburg, Germany-based company said Wednesday in a statement. Volkswagen, which beat analyst expectations for third-quarter earnings, cited the slowing global economy, increasingly intense competition and volatile exchange rates for the change.

That’s what Flavio Volpe calls the Trump administration’s desire for specific language that would allow it to unilaterally administer the production rules for companies.

The issue is being discussed between Trump administration officials, U.S. congressional staff, and domestic and foreign automakers in the context of the legislation that lawmakers will vote on for the new United States-Mexico Canada Agreement to take effect.  “If you’re going to tell the free market, if you’re going to tell large trans-nationals where to invest their capital and where to source you’re products, you’re doing exactly what you are fighting the Chinese on,” Volpe told BNN Bloomberg. “These are not state-owned enterprises, these are, for the most part, publicly traded companies. “You’re building inefficiency into the system.”

The Ford crossover EV’s Mustang inspiration is a sign of things to come. From powertrains to body styles, the vehicle market is evolving rapidly; how beloved nameplates fit into the future remains to be seen

It’s been interesting to watch the reaction to Ford’s upcoming Mustang-inspired EV, which we’ll see next month potentially as the Mach-E. There’s been a healthy amount of skepticism about whether

the pony car concept works as a crossover (which is totally fair) and comparatively little about the fact that it’s a full electric (which is somewhat surprising). But the most common sentiment is indignity: They’re calling this thing a Mustang? It’s an interesting case study the challenges automakers face when dragging beloved aspects of their heritage into the future.

To be clear, we don’t actually know what the upcoming EV is going to be named; Ford repeatedly refers to it as “Mustang-inspired” in its teaser materials, but that’s it. From what we’ve seen in teasers, the front and rear end will incorporate styling cues from the current internal combustion-powered pony car. So some direct connection with the Mustang bloodline is a given, even if the vehicle doesn’t end up having “Mustang” anywhere in its name.

That tying the vehicle to the beloved pony car happens to be creating controversy, and therefore press, cannot be accidental.

This is total speculation, but “Mustang” could evolve into a sort of performance sub-brand within the Ford lineup, incorporating performance-oriented vehicles of varying body styles and propulsion methods. Sounds crazy, but rumors (all unsubstantiated…so far) about a Corvette sub-brand have been floating around for a while.

In any case, the meaning of Mustang in the broader context of Ford's performance seems poised for a shakeup, starting with the vehicle that will debut next month. That it’s going to be electric and a crossover -- a double whammy of sacrilege! -- makes the Blue Oval’s play all the riskier.

While electrification adds a new dimension to the discussion, we’ve had this conversation -- about the ongoing meaning of certain enthusiast-favorite models in the face of dramatic change -- before. Speaking of Corvettes, remember the whole “is a midengine Corvette really a Corvette?” debate? The C8 seems to have silenced most (if not all) of the doubters. Likewise, we all rolled our eyes when Porsche decided to call its high-power Taycans Turbos, despite the electric vehicle’s decided absence of turbochargers, but that doesn’t stop us from appreciating the car itself. Anyway, that Turbo badge lost some of its punch, or at least specificity when base 911s went forced induction.

If there’s a lesson to be learned here, it’s that we’re willing to roll with shakeups to longstanding naming convention, so long as the product is good.

On the other hand, when Porsche launched its SUV in 2002, causing no small number of enthusiasts at the time to wonder whether the hallowed brand had totally lost the plot, it didn’t call it the 911 Cross Turismo -- it called it the Cayenne. Leaning on heritage isn’t always the right move.

Despite its resonance with enthusiasts, a model name like Mustang, and a logo as cherished as the galloping horse, are tools used to sell product first and foremost. When deployed effectively, they can help bridge the gap between the fondly remembered past and the unknown future. The reality is that automakers are not always going to get it right.

Whether Ford nails it with the vehicle known, for now, only as a Mustang-inspired EV, remains to be seen. But as companies redouble their efforts to bring alternative power vehicles to market (and yes, cash in on the unstoppable crossover craze -- they are businesses, after all), we’re going to see more of what Ford is attempting with its upcoming EV.

And if this appropriation and/or recontextualization of historical touchstones is more than you can bear, be thankful that we at least still have Morgan. Right?