Waymo, the self-driving car unit of Google parent Alphabet Inc, on Thursday urged the National Highway Traffic Safety Administration (NHTSA) to “promptly” remove regulatory barriers for cars without steering wheels and brake pedals. Automakers must currently meet nearly 75 auto safety standards for self-driving cars, many of them written under the assumption that a licensed driver is in command of the vehicle using traditional controls.

Porsche is expanding its app-based subscription service to four new cities in the U.S. and Canada, deepening its experiment in flexible car ownership even as other automakers back away. The luxury sports-car brand of Volkswagen AG is adding Las Vegas, San Diego, Phoenix, and Toronto to the pilot program it started in Atlanta almost two years ago.

Toyota dealers in Canada say they are caught in the crossfire of a parts shortage that has caused long delays and angered customers across the country. Nick Schaus, a parts adviser at Prince George Toyota in B.C., said the dealership is experiencing delays in parts deliveries.

“Sometimes it’s taking a couple of months, depending on what it is,” he told Automotive News Canada. He said he was unable to comment on what was causing the backlog. “Anything I hear would be second hand,” he said.

Tina Smith, of Prince George, B.C., said she waited four weeks for a lane sensor for her truck before calling the dealer to find out why she hadn’t heard from them. “That’s when I learned about the disruption at Toyota,” she said in a Facebook exchange with Automotive News Canada. “They hadn’t even called me about the delay. And yes, I’m upset!” Other Toyota customers whose vehicles have been involved in collisions have taken to Facebook to complain their insurance on a replacement vehicle has run out while they’re waiting for parts deliveries, leaving them with the added expense of renting a replacement vehicle.

CBC was the first to report on the shortage, citing angry customers from Halifax to Cambridge, Ont.

Toyota Canada spokesman David Shum confirmed in an email that the company is “encountering some delays in parts deliveries” due to a “planned systems transformation.” He declined to provide a more detailed explanation.  “While we are doing everything we can to minimize any disruptions during these system changes and return to our normal service level as quickly as possible, we recognize that these changes may affect some of our customers and dealers,” Shum said in the email.

Speculation that the delays in parts deliveries is due to the opening of Toyota’s new Eastern Canada parts distribution centre in Clarington, Ont., is unfounded, Shum noted. The move to that facility, from one in Scarborough, won’t take place until next spring, he said.

The UAW confirmed Tuesday it would seek to negotiate a contract with General Motors this fall as a template for negotiations with Detroit's two other automakers. It was thought that workers would choose Ford, a company perceived to be union friendly, so the news is a surprise to some industry observers. Yet many factory workers have said for months they feel mistreated by GM. The UAW, which represents nearly 150,000 hourly workers at Ford, General Motors and Fiat Chrysler Automobiles, also said workers at each local of all three companies have voted to authorize a strike: 95.98% at Ford, 96.4% at GM and 96% at FCA.

Lawyers for owners of 98,000 Volkswagen AG U.S. vehicles that had fuel economy labels that overstated efficiency will ask a U.S. judge for $26 million in attorney’s fees and costs, court documents show. On Friday, the Environmental Protection Agency said the largest German automaker must forfeit greenhouse gas emissions credits and lower the fuel economy ratings on those vehicles after it said vehicle software overstated real-world performance. Volkswagen said on Friday it had agreed to a $96.5 million court settlement to reimburse 98,000 consumers. People who still own the vehicles are eligible for lump-sum payments ranging from $518.40 to $2,332.80 per vehicle.

Shares of Uber and Lyft fell to fresh lows on Tuesday, posting their lowest close ever, as the ride-hailing companies face growing skepticism from investors. Uber closed down 5.7% to $30.70, falling below its previous low of $32.57 on Aug. 30. Earlier in the day, the shares hit an intraday all-time low of $30.67. Both companies have had a particularly rough ride on the public markets since their respective IPOs earlier this year, as investors continue to question whether Uber or Lyft can achieve profitability in the future.

SUBARU AND OTHER SMALL CARMAKERS SQUEEZED BY EV MANDATES

Subaru customers would seem to be the perfect demographic for electric vehicles. Owners of Outbacks, Legacys, and Foresters generally align with the green movement: higher income, better educated, with concentrations on the coasts and in the Rocky Mountain states. Yet, neither the all-new 2020 Subaru Outback or Legacy is offered with a battery option. Subaru says buyers aren’t interested.

Former United Auto Workers official Michael Grimes pleaded guilty Wednesday to wire fraud and money laundering as part of an ongoing FBI corruption probe that could hamper upcoming contract talks with the Detroit-based automakers. Grimes was charged with soliciting hundreds of thousands of dollars in kickbacks from vendors supplying watches and jackets to union members, including a General Motors-funded non-profit training center jointly run with the UAW.

Grimes was a member of the executive board of the training facility, the Center for Human Resources, and an official in the union’s GM department until his retirement in July 2018. The center’s executive board, which included several GM executives, had responsibility for allocating funds and monitoring expenses, according to the government’s case, which also cited two unnamed UAW officials who were CHR board members.

The UAW said in a statement on Wednesday, “The conduct admitted by Mr. Grimes in his plea today is shocking and absolutely disgraceful.”  After Wednesday’s court session, Grimes’ attorney Michael P. Manley said his client was “devastated.” Grimes could face prison terms of up to 20 years. Government attorneys recommended a sentence of 48 to 56 months.
Grimes is scheduled to be sentenced Jan. 14, 2020.

As part of a long-running federal investigation of illegal payments to union officials, the FBI last week conducted searches at the home of UAW President Gary Jones, a union retreat and multiple other locations. The investigation has overshadowed upcoming contract talks with General Motors Co, Ford Motor Co, and Fiat Chrysler Automobiles.

GM this week was named as the union’s strike target. The current four-year contract expires Sept. 14. The UAW statement on Wednesday said the union “will not be distracted from fighting for our members and negotiating strong labor agreements” with GM, Ford and FCA. Before last week’s raids and the charges against Grimes, the FBI had been conducting a wide-ranging investigation into illegal payoffs to UAW officials by FCA.

To date, seven people linked to the union and the automaker have been sentenced in that investigation. Federal prosecutors meanwhile have aggressively expanded the probe.

The office of the U.S. Attorney in Detroit said last week’s raids included the home of current UAW President Jones in the Detroit suburb of Canton. A source familiar with the investigation said a raid had also been conducted on a residential address in Corona, California. Public records list former UAW President Dennis Williams and his wife as the owners.

The latest data from Edmunds confirmed that finance companies are trying to hold firm on term, down payment and total amount financed in an effort to remain within their underwriting parameters and mitigate risk. Edmunds’ August data did show some marginal rises in term and total amount financed year-over-year for used-vehicle and new-vehicle financing, but the average down payment did not soften tremendously. However, analysts acknowledged the average down payment for a new vehicle dropped below $4,000 for the first time in more than a year. Analysts determined the average interest rate for a new-vehicle retail installment contract originated in August stayed below 6% for the second month in a row. The annual percentage rate (APR) on new financed vehicles averaged 5.8% in August, compared to 5.8% in July and 6% in June.

The 2020 Taycan may be the hottest new luxury electric vehicle, but Porsche has a long road ahead if it plans to dethrone the Tesla Model S in the eyes of the buying public. According to a consumer survey conducted by Autolist, Tesla still has the advantage when it comes to EV ownership (or even potential EV ownership). Of the 1,500 Americans surveyed, 45% of respondents picked the Model S as their likely purchase versus just 33% who would pick the all-new Porsche Taycan.

Respondents were asked to list the top three reasons for their choice of either the Model S or Taycan. The top two reasons for picking the Tesla were brand reputation (41%) and Model S 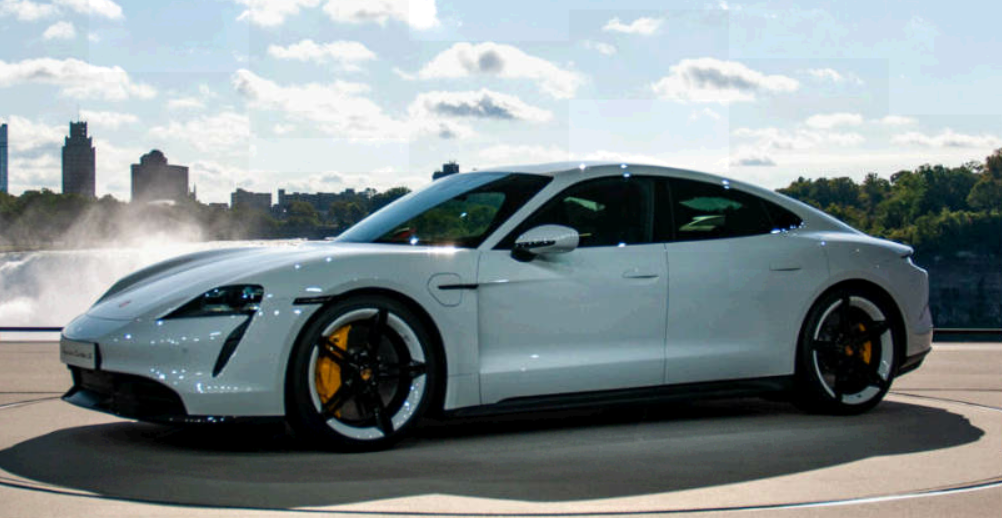 performance (34%). Efficiency, styling, trust in Tesla's ability to build EVs and the existence of the Supercharger network all tied for third place at 24 percent.

Porsche fans, on the other hand, were far more focused in their responses. Brand reputation (59%), performance (46%) and exterior styling (37%) were the top three reasons given for choosing the German performance brand's first electric vehicle.

While it may seem to have been lost in the noise, it's still clear that one key to Tesla's advantage is its exclusive Supercharger network. While Porsche's 800-volt charging system may seem like a trump card, America's current fast-charging infrastructure is neither capable of delivering enough power to supply it nor prolific enough to be accessible to potential owners. Porsche's "Turbo Charging" stations will be able to deliver the juice, but for the time being they will only be found at Porsche dealerships. In the wild, Taycan owners will have to settle for 400-volt solutions available at America's still-nascent fast-charging networks.

The survey was conducted prior to Wednesday's unveiling of the 2020 Porsche Taycan, so it's possible that greater exposure may change some buyers' minds. In the meantime, it's clear that Porsche is fighting an uphill battle against the best-selling electric vehicle brand.