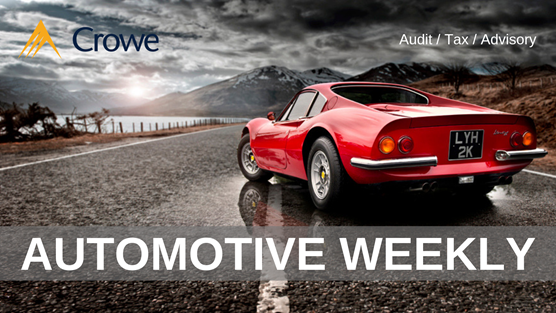 Slumping US new car sales in May on continued high prices and low inventories have some analysts worried those lower-than-expected results could be a harbinger of a broader economic downturn. With increasing worries about macroeconomic headwinds, two analysts registered concern the downbeat data could be a taste of tougher times to come -- even as automakers expect a recovery as supply-chain woes ease.

Ford Reports 4.5% Year-Over-Year Sales Decline in May Amid Industrywide Drop

Amid a broader industry drop in auto sales for the month of May, Ford Motor Co. on Thursday reported that it sold 154,461 vehicles in the U.S. last month — down 4.5% from May 2021. Still, Ford outperformed the industry. Other automakers that report sales on a monthly basis posted steep declines last month. Hyundai Motor America, for example, reported May retail sales of 59,432 vehicles, a 30% decrease from May 2021.

The global semiconductor shortage that’s bogged down the auto industry for almost two years is showing signs of easing, at least for now. Mercedes Benz AG, Daimler Truck Holding AG, and BMW AG are among carmakers now getting enough of the high-tech components to produce at full capacity after experiencing crippling outages for months. The breakthrough comes earlier than the companies predicted and marks a bright spot for an industry facing a deteriorating economy and inflation while managing an historic transition to electric-vehicle production. Manufacturers are cheering the chip-supply improvement but aren’t declaring victory yet.

STELLANTIS COMMITS TO WINDSOR PLANT WITH PLANS BEING ANNOUNCED

Stellantis said its Windsor Assembly Plant in Ontario will produce vehicles on the automaker's new STLA Large platform that will support electric vehicles. Retooling at the plant, which produces the Chrysler Pacifica, Voyager and the Canada-only Grand Caravan, is slated to begin in 2023. The company says the site will have the "flexibility to adjust production volumes as needed to meet changing market demand over the next decade." Chrysler said the electric Airflow crossover concept it debuted this year will reside on the STLA Large platform. AutoForecast Solutions predicts that the next Dodge Challenger and Charger muscle cars will be housed on the platform.

Ford CEO Jim Farley sees the automotive industry “headed to a huge price war,” with the idea of “democratized EVs” coming soon. The comments were made within a conversation with analyst Toni Sacconaghi, as part of Bernstein's 38th Annual Strategic Decisions Conference held earlier this week. In it, Farley took a few positions that are likely to give some of the Detroit establishment heartburn—like how the auto industry is about to be rattled by price pressures, a shakeout that could favor China, and a potentially abrupt consolidation of vehicle makers

“The old OEMs absolutely will get consolidated,” said the Ford CEO. “Many of the small players cannot afford to make this transition; many of them are not investing in embedded software and electric architectures, which is the heart of this transition.”

Tesla CEO Elon Musk earlier this year said that the company isn’t working on the $25,000 Tesla it focused its entire Battery Day presentation around in 2020, suggesting that robotaxis will make it less important. Farley followed with a version of that position, saying future Ford products might not be based around the lowest material costs (and sticker price), but around optimizing the total ownership cost. And that might be for a completely different use model.

Nobody has yet built a product for the 1.3 million Lyft and Uber drivers optimized for low operational costs, he noted. Although there’s one exception to that we should point out: UK’s Arrival, which showed a prototype of an electric MPV late last year.

Some of the Chinese EV makers are managing higher margins with lower prices. Farley pointed to the lithium-iron phosphate battery chemistry—and its cost of about 20% less than other lithium-ion chemistries—as one possibility to help get there. But he underscored that the simplification of labor content is going to be a big aspect for cutting cost.

Reengineering vehicles will aid efficiency and thus help minimize the size of battery packs. He has suggested that's already underway in the Mustang Mach-E, incrementally.

We’ll also see more optimization for aerodynamics. A full-size pickup truck optimized for aero, versus an F-150 Lightning, means 75 miles in additional range, Farley seemed to suggest, adding that “it’s kind of too bad that the Lightning ends up being our most successful vehicle today because it feels so derivative from the F-Series." “It’s not our only truck and the other trucks won’t look anything like it,” he added—perhaps referring to the full-size electric truck for “incredibly high volume” due in a few years.

Direct to consumer, no inventory: What dealerships?

The top executive also isn’t convinced Ford needs public advertising for the vehicles developed and sold under its Model E-business. He added that Ford should be doing experiential marketing like vehicle birthday updates rather than Super Bowl ads. Farley also says that Ford needs to go to non-negotiated pricing and 100% online, with no inventory, and direct-to-consumer pickup and delivery. Parsing that point, Farley isn’t talking about getting rid of dealers but making them something completely different than what they are now. “We’re working with our dealers as we speak through this,” said Farley. Although on the commercial side, the CEO noted that dealers “wind up being our strongest thing.” Ford retailers will become more specialized, with “multiple tiers of dealers,” and a plan to use the physical presence of dealerships to outperform Tesla.

Borrowers with subprime credit are pinched in the current auto finance market, with the average amount borrowed and the average monthly payment up disproportionately on subprime loans and used vehicles, compared with prime-risk borrowers and new vehicles. A shortage of computer chips is a major factor in low inventories of new vehicles, and that’s driven up new-vehicle prices. Plus, there is a follow-on effect on used cars because dealers take fewer trades. Lower new-vehicle production also means fewer nearly new used cars. Lenders can afford to be choosy, and they are choosing to avoid risk.

\Swedish automaker Polestar Cars will introduce what it says will be its highest-volume vehicle yet in October. The Volvo affiliate will bring the Polestar 3, a Porsche Cayenne-sized crossover, to the U.S. in the first quarter of 2023. Ahead of the launch, Polestar released a new film and the first undisguised image of the midsize crossover. Unlike the current Volvo-inspired Polestar 2 sedan, the Polestar 3 features new design elements that include a sloping silhouette and headlight and rear light styling that are distinct from other Polestar models. U.S. dealers will learn more about Polestar 3 configurations and pricing this summer.

As Ford Authority reported back in January, a number of Ford Bronco owners have had major issues with their twin-turbocharged 2.7L V6 EcoBoost powerplants, to the point where three owners recently filed petitions seeking an investigation from the National Highway Traffic Safety Administration (NHTSA) into these problems, while 12 others have filed complaints related to that matter as well. Now, sources familiar with the matter have explained to Ford Authority that there are two main sources for these issues, which have led to total engine failure in certain cases

As some are already aware, part of the problem with these 2.7L powerplants is that they utilize cheaper, sub-optimal valves that were acquired from a new supplier that apparently didn’t properly validate those particular components. But in addition to the faulty valves, the Bronco’s version of the 2.7L V6 EcoBoost also utilizes a less than optimal oil pan design as well, which allows the oil pickup tube to become uncovered and suck in air, which in turn can destroy not only valves but bearings as well, particularly during spirited or erratic driving when oil is sloshing around inside the powerplant.

These issues aren’t exactly new to The Blue Oval, which experienced similar problems with the twin-turbo Ford 3.0L V6 EcoBoost engine used in the Ford Explorer ST, which is essentially a bored and stroked version of the 2.7. Now, those problems are once again surfacing in certain examples of the sixth-generation Bronco, too.

With a grand total of 32 Bronco owners filing complaints related to engine failure thus far, Ford noted in its NHTSA filing that 25,538 SUVs could ultimately be affected by this issue. So far, affected customers claim that their vehicles experienced a loss of power while driving at highway speeds, after which the Broncos would not restart due to catastrophic engine failure.

APPLE'S NEXT FRONTIER IS YOUR CAR'S DASHBOARD

Apple Inc wants to power the dashboard of your next car, but first it must convince automakers they will not end up surrendering future profits to the iPhone company like the makers of flip-phone handsets. Apple on Monday gave a preview of a new generation of its CarPlay software that will migrate from its current home on the entertainment screen to power everything in front of the driver. While the move from one screen to another may seem like a small step for Apple, it's a huge leap in terms of both the technological and business engagement between the iPhone maker and the world's automakers.

Ford Motor Co.’s electric F-150 Lightning pickups are poised to come to the rescue of any Tesla drivers in need of a jolt. Initial owners of the model that beat the Cybertruck to market have shared images online of an adapter that came with their pickup enabling them to charge Teslas, which use plugs distinct from the rest of the auto industry. When an electric-vehicle enthusiast blog wrote this week that Ford appeared to be trolling its rival, Chief Executive Officer Jim Farley assured his Twitter followers that the automaker means well.

As Europe moves closer to approving a legal ban on the sale of new cars with internal combustion engines, auto makers are calling for more time to make the shift to electric cars. Lawmakers in the European Parliament on Wednesday approved a plan for cutting greenhouse gas emissions that includes a proposal to ban the sale of new cars that run on conventional engines after 2035. That puts fresh pressure on auto makers and suppliers to accelerate a shift most have already started from conventional cars to electric vehicles. With millions of jobs in the European Union dependent on the auto industry, executives are warning that moving too fast could hurt automotive-parts suppliers especially hard. A too-quick shift could lead to big job losses at a time when the global economy is already strained, they said.