Toyota Motor Corp will ramp up production at its new Mexican plant to 100,000 vehicles a year by 2021, marking a major step to shift production of its popular Tacoma pickup truck to Mexico from the United States, the company said on Thursday. The plant in the central state of Guanajuato, along with an older facility near the U.S. border, will bring Toyota’s Mexican production to 266,000 trucks a year when at full capacity, the company added.

In a first-of-its-kind approval by U.S. regulators, the National Highway Traffic Safety Administration on Thursday gave permission for autonomous vehicle startup Nuro Inc. over the next two years to deploy up to 5,000 low-speed electric delivery vehicles without human controls like mirrors and steering wheels. The rollout of the R2 vehicle will take place in Houston, with plans for it to deliver items like pizza and groceries. It is about half the width of a regular car, has no steering wheel or seating positions and boasts gull-wing cargo doors. 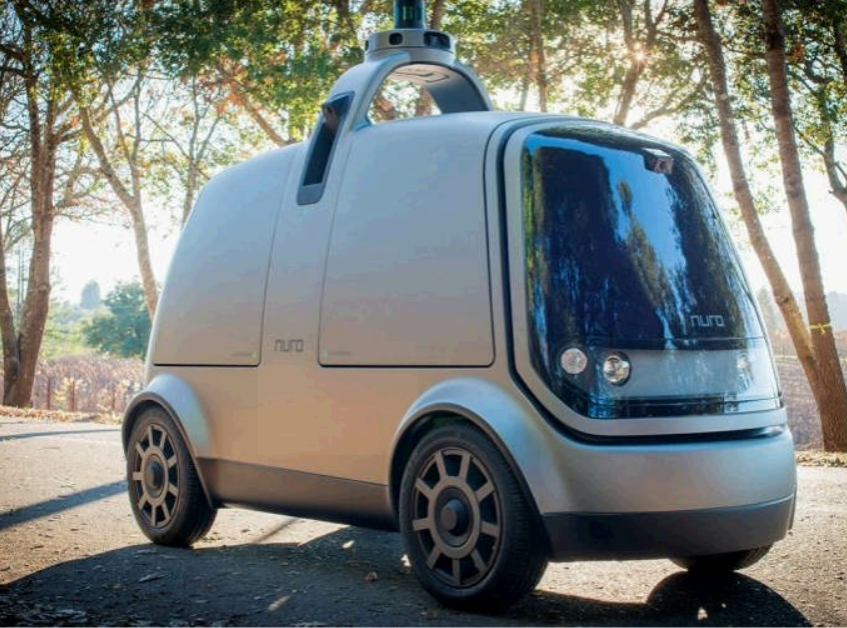 Nuro, a privately held robotics company based in Mountain View, Calif., said it will begin public road testing to prepare deliveries in Houston in the coming weeks. Nuro called NHTSA's regulatory approval "a milestone for the industry."

Americans "waste a lot of time running errands," Nuro said, adding that it envisions "a future where everything comes to you, on-demand, for free." Nuro said it worked with Roush Enterprises Inc., based in suburban Detroit, on the design and assembly of the vehicle. The vehicle was built with 65 percent more compartment space than an earlier version, new temperature controls to keep food fresh and a larger battery pack to enable all-day operation.

The agency's approval of Nuro's petition will allow the company to deploy the R2, a vehicle designed to have no human occupants and operate exclusively with an automated driving system, as part of a delivery service for restaurants, grocery stores, and others. Walmart Inc. and Domino's Pizza said last year they would launch pilot delivery projects with Nuro in Houston.

The R2, which Nuro describes as an "electric-powered delivery robot," is designed to make short trips and will be restricted to pre-mapped neighborhood streets. Nuro told NHTSA in its October 2018 petition that the R2 vehicles will at all times be monitored by remote human operators who can take over driving control if needed. Automakers must meet about 75 auto safety standards to win such regulatory approval, many of which were put in place with the assumption that a licensed human driver would be in control. The approval followed three years of talks between the government and Nuro. U.S. lawmakers have spent years trying to overhaul federal laws to speed deployment of self-driving vehicles.

The agency said it issued the approval with such exemptions, the first time it ever approved a petition to allow deployment of automated driving systems without meeting all existing U.S. auto safety standards. NHTSA said as a condition of its approval it would require "greater oversight of the R2 than typical for an exempt vehicle" including "required outreach to the communities where the R2 will be deployed."

Nuro said despite the approval, regulators "must modernize the existing regulations that never envisioned a vehicle without a driver or occupants." Because the R2 is classified as a low-speed neighborhood vehicle, it does not need to meet all safety requirements of traditional vehicles.

Nuro, which was co-founded in 2016 by two former engineers of Google's self-driving car project, said last year it raised $940 million from SoftBank Group Corp., which valued the Silicon Valley-based company at $2.7 billion. The funding by SoftBank came through its $100 billion Vision Fund. Nuro has worked with grocery store chain Kroger Co. since 2018 on a pilot project to deliver groceries autonomously, first in Scottsdale, Ariz., and then in Houston.

NHTSA is requiring real-time reporting about safety issues, regular meetings with the agency and community engagement in deployment areas.

Tesla Inc. has always had one foot in the automotive world and the other in technology. But when it comes to the company’s valuation, neither truly fits. The stock’s stunning ascent -- doubling in just the first 23 sessions of the year on record vehicle deliveries, the opening of a China plant and an earlier-than-expected profit at a jointly operated battery factory -- has cooled off as exuberance gives way to caution. But the still-meteoric advance of the last five weeks has prompted more comparisons with high-growth technology names, and even has tech-focused market watchers looking more closely at the stock’s fundamentals. “With Tesla’s extraordinary rise from $180 last year to nearly $1,000 this past Tuesday, we are receiving an increasing volume of calls from tech PMs and analysts who have begun to pick up coverage of Tesla from the traditional industrials/autos cohort,” Morgan Stanley analyst Adam Jonas wrote in a report, referring to portfolio managers.

The stock was recently volatile again, reversing early declines after two Democrats in the U.S. House of Representatives introduced legislation to create a nationwide network of electric-vehicle charging stations. The measure is unlikely to pass in an election year with Republicans controlling the Senate.

Tesla’s valuation, which hovered around $132 billion after Wednesday’s plunge, reflects a price-to-sales multiple around 5, compared with 0.4 for General Motors Co. and 0.2 for Ford Motor Co. Toyota Motor Corp. and Volkswagen Group also trade at a multiple of less than 1. Tesla bulls, however, say it’s unfair to compare it with legacy automakers, pointing instead to technology companies as its true peers. “It appears Tesla, in the market’s view, has gone far past the point of comparison vs traditional auto companies,” Jonas said. While Tesla’s valuation is an order of magnitude higher than autos peers, he said, “we think this is largely deserved -- Tesla is a significantly faster-growing auto company, and it is also more than an auto company.”

Tesla can’t yet be measured on a comparable price-to-earnings basis since it hasn’t had four straight profitable quarters on a GAAP basis. It was in the black in the past two periods on an adjusted basis. “Tesla could be at $900, but it would need revenues like Volkswagen, margins like Apple, and reinvest like no other manufacturing company in history has ever done,” said Aswath Damodaran, a professor at New York University’s Stern School of Business who specializes in valuation. It’s possible Tesla succeeds in doing one of those things, but “connect them together and that’s when the story implodes. This is a Grimm fairy tale with manic swings.”

Using a valuation model available on Damodaran’s website, with all else staying equal, Tesla would need to expand its revenue at an annual compounded growth rate of 35 percent over the next five years to justify a share value of just over $776. That would imply a revenue of $220 billion in 2030, the model shows. The model also assumes that operating margin climbs to 12 percent from 1.6% over the next five years, and a tax rate of 25 percent.

Tesla’s adjusted revenue grew 14.5 percent in 2019 over last year, to $24.6 billion, according to data compiled by Bloomberg, and in 2020 it is estimated to rise 31 percent. RBC Capital Markets analyst Joseph Spak used a two stage model, in which Tesla has a high growth rate in the first stage with free cash flow rising at 30 percent compounded annual growth rate (CAGR) for 10 years and normalized growth in the second stage, and arrived at $630 a share.

Spak said there were only three companies in the S&P 500 Index -- Apple, Amazon and Alphabet -- that started with at least $1 billion in free cash flow in the base period and achieved at least 30 percent free cash flow CAGR for a 10-year period. Those three companies “have fundamentally different profitability and cash flow profiles making Tesla’s likelihood of achieving that mark more difficult.,” Spak said.

Tesla reported an annual loss on a GAAP basis of about $862 million for 2019. Wall Street analysts, on average, expect it to reach $4.9 billion in net income in 2023. “Tesla is trading at well over two times the enterprise value of Daimler, and three times of BMW,” Roth Capital analyst Craig Irwin, said in an interview. “That doesn’t seem to make so much sense to me.”

The debate comes down to whether Tesla has a years- or some day even a decade-long lead over other automakers in the electric-car race. It “seems the market has decided it’s a much longer lead than a one or two years,” Irwin said. “Not to sound like an ‘OK, boomer’ to the younger investors rushing into Tesla shares, but the recent price action brings to mind Nasdaq circa 1999,” Barclays auto analyst Brian Johnson said. The recent price surge opened up the possibility of raising capital cheaply, reducing any chance of a stalled business, yet Tesla remains fundamentally overvalued, he said.

Tesla’s volatile swings over the past few days called to mind a similar performance from Qualcomm Inc. almost exactly 20 years ago, when the stock soared 360 percent over five months. After touching a high of $100 in early January 2000, the stock started paring the gains. Only now, roughly two decades later, has it re-approached those levels. Qualcomm traded around $88 Thursday after issuing a disappointing forecast for second-quarter chip shipments.

“The whole thing seems preposterous, it is the craziest thing since 1999,” said Williams Trading’s Brad Meikle, who is one of the most bearish Tesla analysts on Wall Street. “It is absolutely a bubble.”

An unexpected fall in profit prompted Daimler AG to cut its shareholder dividend by a third as the luxury car maker battles slumping demand, the escalating cost of a fundamental shift to electric vehicles and charges related to emissions-cheating probes. The maker of Mercedes-Benz said Tuesday that it swung to a loss of $12 million in the three months to December, warning it would sell fewer cars this year.

Mercedes-Benz is teaming with Hydro-Québec in the race to perfect a new generation of lithium-ion battery said to be lighter, stronger and safer than batteries now powering electric vehicles. The partnership will allow researchers to field-test batteries in Mercedes vehicles and could hasten development of solid-state li-ion batteries that promise greater range and durability, the companies said. As well, solid-state batteries do not use the flammable liquid electrolytes blamed in numerous difficult-to-extinguish fires in electric vehicles around the globe.

Like other automakers, Mercedes is moving aggressively into electrification, with a goal of introducing at least 10 EVs for 2022 under its EQ and Smart sub-brands. It also plans more plug-in gas-electric hybrids across its model lines.

Hydro-Québec is a leader in battery research and holds some 800 patents on energy storage technology. It developed its first solid-state li-ion battery in the 1990s. Terms of the deal were not disclosed. Testing will take place at the Quebec agency's research centre near Montreal and at the SCE France laboratory, a Hydro-Québec subsidiary in southwest France. While battery technology has improved, issues around range, durability and safety are major obstacles to EV acceptance.

Karim Zaghib, who leads Hydro-Québec's battery research, noted that EV batteries are not off-the-shelf products, so working with a major automaker that can integrate prototype unit into complex vehicle architecture should allow major progress toward better batteries. As well, "our association will allow us to test new materials quickly in field conditions, and so accelerate the development cycle and respond to the concerns of automobile manufacturers." Zaghib said in a release.

The U.K.’s deadline for killing off vehicles powered by fossil fuels keeps moving earlier -- and could now be just 12 years away. Transport Secretary Grant Shapps said Wednesday that Prime Minister Boris Johnson’s government is seeking to end the sale of new petrol and diesel cars by 2032 to meet its goal for net zero emissions by the middle of the century. That’s three years earlier than the 2035 date Johnson announced last week, and eight years earlier than the 2040 deadline announced just two-and-a-half years ago.