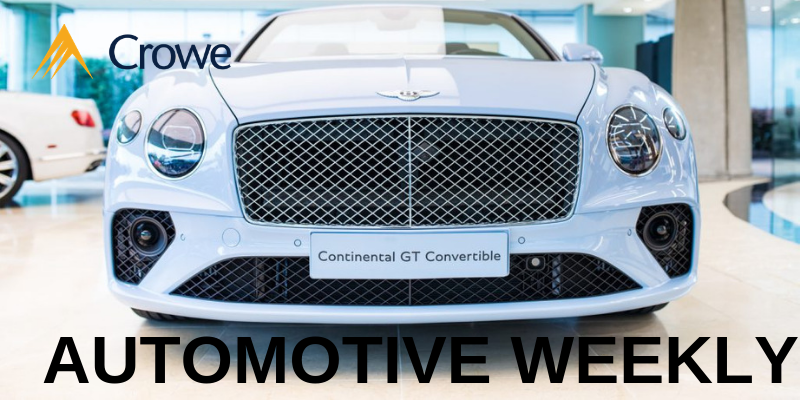 While outlining expectations for the next few years, Magna International also cut ties with its autonomous-vehicle partner Lyft on Thursday. While Magna anticipates growth to 2022 it does expect sales this year to fall compared with 2019 due to a variety of factors. In its outlook released Thursday, the Canadian auto supply giant said the stronger U.S. dollar, the sale of its fluid pressure and controls business and lower expected light vehicle production in Europe will all contribute to lower sales in 2020. The company says it expects total sales between $38 billion and $40 billion this year. Net income attributable to the company for the year is expected to be between $1.8 billion and $2 billion. CFO Vince Galifi said in a conference call that foreign exchange rates will cost the company $700 million in 2020. The company also said Thursday that after nearly two years of collaboration, it has decided to end its self-driving technology partnership with Lyft. “We are concluding our partnership to co-develop self-driving technology,” the company said in a statement. “We expect to continue to collaborate in several areas related to autonomous developments, including aspects of hardware development and potential joint opportunities in software and hardware manufacturing.”

The partnership was proposed as a way to merge Magna's automotive expertise with Lyft's data-gathering and real-world testing to roll out technology that they said was expected to be market-ready over the "next few years" as self-driving ambitions in the industry grew. Magna now sees fully self-driving systems as a longer-term, expensive prospect and will shift focus to driver-assist systems with more reasonable timelines, Walkers said.

"I do think that the market has become more realistic about how fast the various technologies will penetrate," he said. Walker said the industry and society are still in the early stages of what will be unprecedented changes in mobility. Kotagiri said Magna would continue to work with Lyft on some aspects of software and hardware, but that it has many capabilities in-house.

"There is a renewed focus both in the market and the industry as well as from our side in terms of the take rates for the assisted driving portion of it. And we have significant programs, and we see a possible ability to address a lot of that market." He said the sensor requirements for the higher levels of autonomy, which don't require the driver to always be at least ready to take the wheel, are significantly different to the lower levels that it's focused on.

Magna said it will focus more on near-term programs like its front and rear cameras and some surround view systems, as well as advanced radar systems. Despite ending the self-driving technology partnership, Magna executives said advanced driver assistance systems, electrification and powertrain technologies are still key areas in which Magna will continue to expand. Company executives said they see consolidation coming in the industry among automakers, Tier 1 suppliers and others developing these technologies, and that Magna may consider acquisitions related to new vehicle tech once the market levels off.  “We certainly have the ability with the balance sheet to make an acquisition we want,” Galifi said. “We want to be prudent in what we do.”

In the long term, Magna said it anticipates continued growth in total sales and improvement in its earnings before taxes, “both as compared to 2019 despite our expectation of relatively stable light vehicle production levels in North America and Europe during this same time period,” the company said. The company also announced that its board appointed Swamy Kotagiri company president, reporting to CEO Don Walker. Kotagiri will continue to oversee the company’s power and vision segment as well as corporate research and development programs and related investments.

Detroit’s three automakers are bracing for a slower year of U.S. sales by tapping the brakes on production. And they’re not alone: Researcher LMC Automotive projects that five of the six largest North American manufacturers will assemble fewer vehicles this quarter than a year ago. Arguably the biggest concern the auto industry has going into 2020 is how much longer the good times will last after years of strong demand and rich pricing.

Canadian billionaire Lawrence Stroll is emerging as the front-runner to buy a stake in luxury carmaker Aston Martin Lagonda Global Holdings as interest from a rival Chinese investor wanes, people with knowledge of the matter said.

Chinese tycoon Li Shufu’s Zhejiang Geely Holding Group is cooling on the idea of a deal with Aston Martin, the people said, asking not to be identified because the information is private. Aston Martin could decide on its plan of action as early as this month, according to the people.

Stroll has been discussing a potential investment of about 200 million pounds (US$261 million) in the British automobile manufacturer, Bloomberg News reported earlier. Aston Martin spoke to several investors about a potential capital increase as it makes a final effort to bring in fresh funding, people with knowledge of the matter said at the time.

No final agreements have been reached, and the carmaker could fail to reach an agreement or decide against bringing in new investors, the people said. Representatives for Aston Martin and Geely declined to comment, while a representative for Stroll couldn’t immediately be reached for comment.

Subaru Corp.’s chief executive said he didn’t see much evidence Americans want electric vehicles or plug-in hybrids and expressed frustration at navigating between environmental regulations and consumer demand. Tokyo-based Subaru relies on the U.S. for two-thirds of its global sales, and has already had a tough experience trying to sell a vehicle that can be charged at home.

Analysts say affordability will continue to be as much an issue this year as it was in 2019 when the average transaction price for a new vehicle reached a record $37,183, which will continue to push consumers to consider used over new. Cox Automotive analysts say used vehicle sales hit 39.7 million in 2019, up 300,000 from 2018.

AUTOMAKERS TO WATCH IN 2020

Cox Automotive analysts Eric Ibara and Michelle Krebs tell which ones they’re keeping an eye on. They also laud new midsize pickups. Considering how well recently introduced midsize pickup trucks are doing, it may be a wonder why domestic automakers abandoned that segment in the first place.

Fiat Chrysler’s chief executive Michael Manley said on Wednesday that merger talks with Peugeot owner PSA to create the world’s No. 4 carmaker are progressing well and he hopes to have a deal within 12-14 months. Speaking to Reuters on the sidelines of an industry meeting, he said he doesn’t expect any major obstacles that could delay a final agreement.

If you’re surprised Ram would be in the discussion with Mercedes and BMW for the top luxury car of 2020, you’ll be even more surprised by the winner of one such contest. The Ram 1500 Limited and Laramie Longhorn trims are Cars.com’s top luxury car of the year, beating offerings from both European blue bloods, not to mention every other automaker. In fact, it’s the first time a truck has even been in the discussion, according to Jenni Newman, Cars.com’s editor-in-chief.

Daimler has been forced to reduce its 2020 production targets for the Mercedes-Benz EQC electric car to 30,000 from about 60,000 due to a supply shortage of battery cells from LG Chem, Manager Magazin reported on Thursday. Daimler wanted to sell around 25,000 EQC vehicles in 2019, but only managed to build around 7,000 for the same reason, Manager Magazin said.