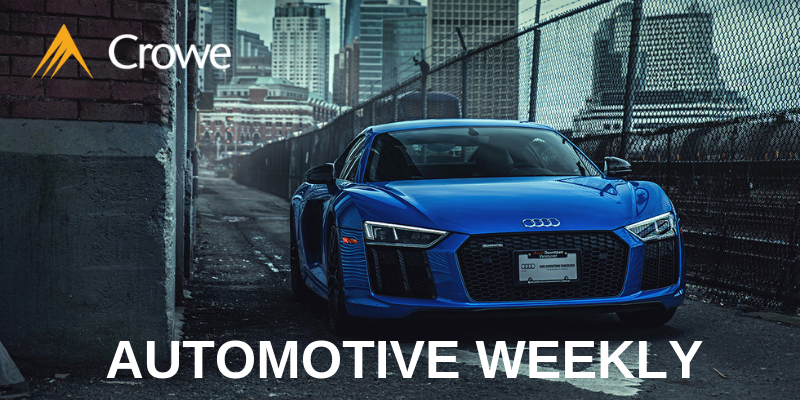 Kia Motors Corp said it will recall nearly 380,000 Sportage and Cadenza vehicles because an electrical circuit could cause a fire in the engine compartment. The recall covers vehicles built from the 2017-2021 model years and dealers will replace some fuses in the electrical junction box. Kia is advising owners to park outside and away from structures as a precaution until the recall repair is complete.

AND NOW… A FOAM SHORTAGE

After the unprecedented winter storm in Texas and other states last month, automakers and suppliers could be slammed by yet another devastating parts shortage that could idle seating plants as early as next week. The blizzard halted the region's critical petrochemical plants, which could lead to a shortage in automotive seating foam, industry sources say. The storm that left millions without heat or power amid subfreezing temperatures has impacted production of oil refinery byproducts used to make propylene oxide needed for the polyurethane foam found in auto seats.

Ford Motor has quietly started production of a new pickup in Mexico that’s expected to be smaller than its current Ranger model, according to data released by the automaker. The new truck was disclosed to investors Wednesday in the automaker’s monthly production data as a “C-Pick Up” that’s being produced at its Hermosillo plant. Only 21 vehicles were assembled in February, likely indicating early prototype models for testing. A spokesman for Ford declined to comment beyond what the company disclosed in its monthly production report.

STELLANTIS WILL INCREASE PACE OF EV LAUNCHES IN EUROPE, U.S.

Stellantis will go "full throttle" on battery-electric vehicles to meet emissions goals in Europe and the U.S., as hybrid powertrains eventually "disappear," CEO Carlos Tavares said. Tavares has not yet committed Stellantis, which has 14 brands and home bases in France, Italy, Germany and the U.S., to a date when it will sell only zero-emission vehicles but, he said, "The societies in which we operate will trend toward a ban on internal combustion engines."

Volkswagen is accelerating its plans for all-electric vehicles in a bid to become “the world’s most desirable brand for sustainable mobility,” a title arguably already owned by Tesla. The German automaker Friday morning said more than 70% of its Volkswagen brand’s European sales will be EVs by 2030, up from a previous target of 35%. In the U.S. and China, it expects half of its sales to be EVs by that time frame.

VOLVO DEALERS ON EDGE OVER DIGITAL RETAIL PLAN FOR EVS

As Volvo Cars transforms into an EV-only brand in less than a decade, it is reinventing the way it will sell the next-generation vehicles. The automaker last week announced plans to move to an online-only, fixed-price sales model for its expanding fleet of battery-powered models. Volvo's all-digital strategy will have ramifications for the brand's 281 U.S. dealers. Retailers are "concerned and fearful" about where they stand, Volvo Retail Advisory Board Chairman Ernie Norcross told Automotive News last week. Volvo Car USA CEO Anders Gustafsson was quick to attempt to calm dealers' nerves. Dealers will continue to sell the vehicles and maintain the customer relationship, Gustafsson said.

“A car is now a computer. When we think of a car we’re not thinking of a cyber and physical component we’re still thinking of physical car, because we’re not looking at it in a new and refreshed perspective of what a car really has become.” Those new nomenclatures expose an issue the automotive industry is struggling to both recognize and overcome—how to convert its long-standing emphasis on cyclical product development and manufacturing into more effectively focusing on what really now drives the industry—continuous development through software. Not only must the industry make that conversion, some experts say it must make the move faster.

Nissan is recalling more than 854,000 cars in the U.S. and Canada because the brake lights might not come on when the driver presses on the pedal. The recall covers certain Sentra compacts from the 2016 through 2019 model years, including more than 807,000 in the U.S. Nissan says silicon contamination from grease used in nearby components can cause oxidation that can make the stop lamp switch near the brake pedal malfunction.

A federal judge on Tuesday approved Daimler AG’s $1.5 billion settlement to resolve a U.S. government probe into the German automaker’s use of undisclosed software that allowed excess diesel pollution to be emitted by 250,000 of its vehicles in the United States. The settlement with the U.S. Justice Department and California Air Resources Board, which was announced in September, includes an $875 million civil penalty levied under the Clean Air Act, $70 million in additional penalties and $546 million to fix the polluting vehicles and offset excess emissions, court papers show.

Toyota may have pioneered the just-in-time manufacturing strategy but when it comes to chips, its decision to stockpile what have become key components in cars goes back a decade to the Fukushima disaster. After the catastrophe severed Toyota’s supply chains on March 11, 2011, the world’s biggest automaker realised the lead-time for semiconductors was way too long to cope with devastating shocks such as natural disasters.

VOLKSWAGEN’S SOLUTION TO SEVEN YEARS OF LOSSES IS ANOTHER SUV

Volkswagen AG is looking to stem seven years of losses in South America by padding out its SUV lineup, betting it will command better margins and be more resilient through the region’s many ups and downs. VW will produce the Taos sport utility vehicle at its Argentina plant for South American markets and in Mexico for the U.S. Its launch around midyear will mark the culmination of roughly $2 billion of recent investment the German automaker has announced for operations in Argentina and Brazil.

Volkswagen strategy chief Michael Jost will quit after more than a decade with the group, he said on his website, adding he would now focus on building smart boats with his family. He became Volkswagen’s head of group strategy product in 2018, driving the group’s change to become a global leader in electric vehicles.

Nearly 60% of car buyers responding to a Cars.com survey said the pandemic influenced their decision to purchase a vehicle. More than 50% bought sooner than originally planned, according to the company's national survey of more than 1,500 online respondents, released on Wednesday. Another insight from the survey is that over the past year, at-home delivery and virtual services by local dealerships skyrocketed. Also over the past year, 38% of car buyers were in urban or city areas. Three out of four city dwellers said the pandemic influenced their decision to buy.

SUPERPRIME, PRIME CONSUMERS DRIFT BACK TO NEW CARS IN Q4

Customers in the highest credit tiers opted for new vehicles in larger numbers in the fourth quarter, credit bureau Experian said last week. The shift from used vehicles was driven in part by past and upcoming stimulus checks, residual incentive activity from the third quarter and tight inventory, though the credit bureau said the exact reasons for the shift were unclear. The trend of higher-credit consumers opting for used vehicles was disrupted last year when strong automaker incentives enticed those buyers to the new-vehicle market. Residual incentives and forthcoming stimulus checks may account for why prime customer share of new-vehicle originations rose in the fourth quarter, said Melinda Zabritski, Experian's senior director of automotive financial solutions.

Toyota is looking at some very large applications for its fuel-cell tech. Will LG Chem ramp up production of Tesla’s new battery format in the U.S.? And what does Volkswagen plan to do with its millions of battery packs after they’re in EVs? This and more, here at Green Car Reports.

LG Chem is reportedly planning to build cells in Tesla’s new 4680-format at a new U.S. plant. It’s not yet clear whether this is the same plant it’s in talks with GM over, but it could together with Tesla’s own cell-manufacturing plans give the EV giant what it needs to keep ramping up U.S. production.

Volkswagen has shown, with a pilot battery-recycling plant in Salzgitter, Germany, how it hopes to recover up to 95% of raw materials from used battery packs for potential reuse. The automaker plans to establish similar facilities around the world—including in the U.S.

And Toyota has neatly packaged the fuel-cell stack from its latest Mirai fuel-cell sedan into a hydrogen fuel-cell module that can power buses, trains, or ships—or be placed into stationary generators or power arrays. Two different layouts for the 80-kw plug-and-play modules will give companies a lot of options—although they’ll still need to take care of the hydrogen storage and sourcing part of the puzzle.

And over at Motor Authority: A patent application filed by Apple highlights a new zone-based lighting system that could revolutionize cabin lighting—basing it on the movements of occupants, or where they’re looking. Although likely for use with Apple’s self-driving electric car, such technology might be useful even as part of Apple CarPlay as vehicle interfaces become more complex.