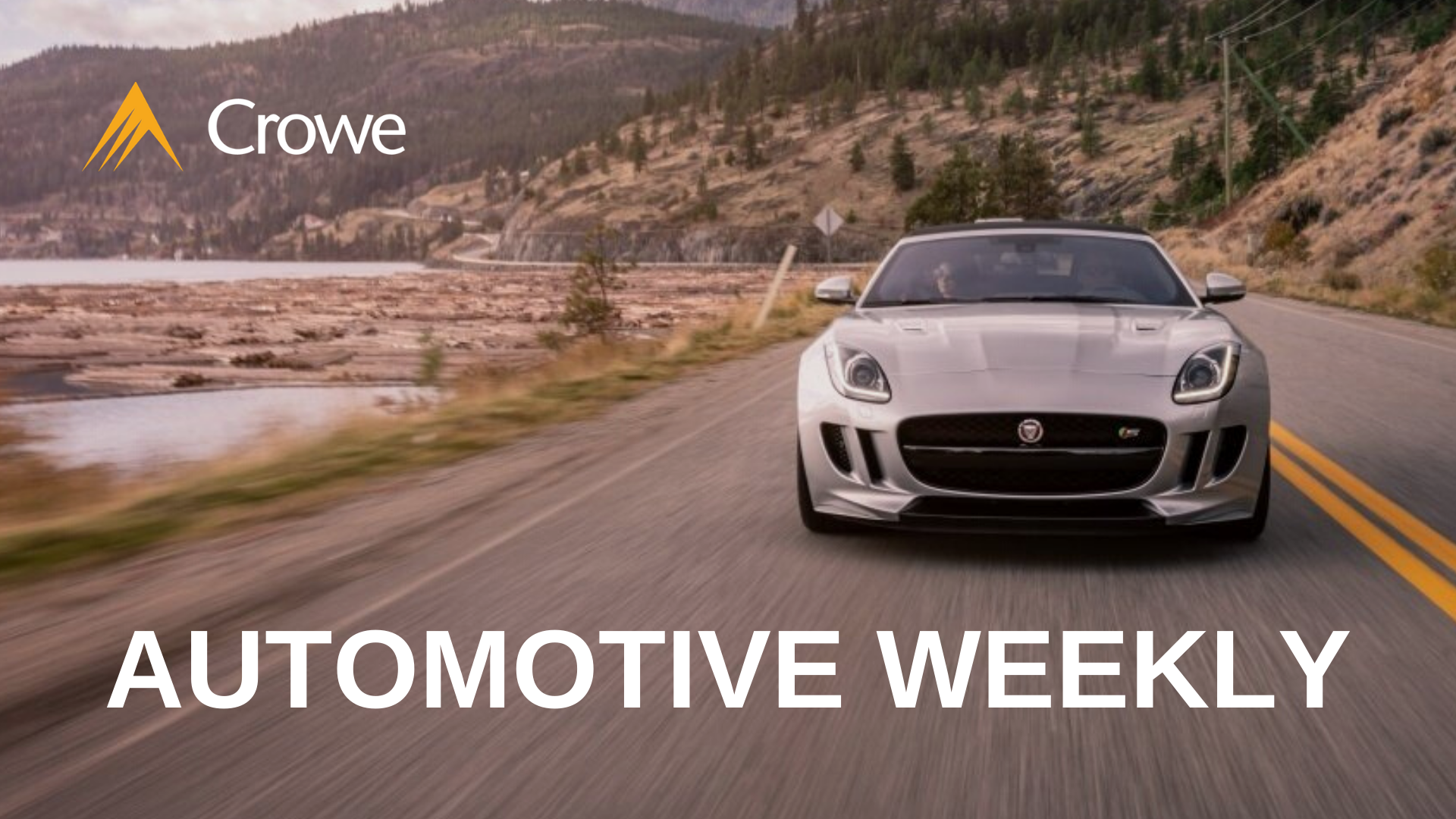 Volkswagen AG plans to at least double the share of its sales that are fully electric this year, with the high end of its target range suggesting it could come close to Tesla Inc.’s expected global deliveries. The German carmaker aims for battery-electric vehicles to be 6% to 8% of sales this year, up from about 3% in 2020, according to a presentation by Chief Executive Officer Herbert Diess that was published on VW’s website. VW sold more than 9.3 million vehicles worldwide last year.

After two years of faltering sales and fallout from the 2018 arrest of ex-chairman Carlos Ghosn, Nissan Motor Co.’s newly installed management are at another crossroads: how to get Japan’s second-largest automaker out of a rut and beyond the shadow of the disgraced executive who drove its strategy for decades. It’s a tall order, particularly considering Nissan’s hefty pile of debt, around 8.3 trillion yen ($80 billion) – double what it had 10 years ago -- lackluster showing in Europe, and U.K. factory supply chain woes. Nissan is also facing unparalleled competition, especially in the realm of advanced autonomous driving.

Daimler said on Thursday that a strong fourth quarter helped it post better-than-expected 2020 group operating profit and that it was optimistic for 2021. Group earnings before interest and taxes (EBIT) for 2020 came to 6.60 billion euros ($8 billion), above consensus for 5.25 billion euros, the carmaker said, citing preliminary figures. The Stuttgart-based maker of Mercedes-Benz cars and trucks said that the current shortages in semiconductors and the COVID-19 disruptions would probably impact the first quarter.

Germany’s three big carmakers accumulated massive amounts of cash late last year while the market was preoccupied with the future of electric-vehicle producers. Daimler AG, BMW AG and Volkswagen AG generated 13.3 billion euros ($16.1 billion) of free cash flow in the fourth quarter, according to Bernstein analyst Arndt Ellinghorst. He predicts incumbent automakers will play a much bigger role in a future dominated by EVs than suggested by the unprecedented valuations assigned to Tesla Inc. and the upstarts trying to follow in Elon Musk’s footsteps.

The COVID-19 pandemic is speeding up the race to provide complete, “end-to-end” digital new-vehicle sales, but nobody’s quite all the way there yet. Leaders of some of the biggest auto retailers discussed at the online J.D. Power Auto Summit what steps they are taking to improve digital sales. For example, later this year, Asbury is introducing its own end-to-end online solution, called Clicklane. The goal is to roll it out by the end of the second quarter in markets where the chain already has brick-and-mortar new-vehicle stores.

Ford and Google are entering a six-year deal that will make the tech giant responsible for much of the automaker’s growing in-vehicle connectivity. Google will also provide cloud computing and other technology services. The partnership announced Monday is designed to streamline Ford’s operations and accelerate an ongoing $11 billion restructuring plan. It marks a major shift for the automaker, which has spent hundreds of millions of dollars annually in recent years to develop and maintain such systems.

Volkswagen AG Chief Executive Officer Herbert Diess provided an upbeat outlook for the back half of this year even as Covid-19 and a global shortage of semiconductors is poised to hit first-quarter results. “I am looking forward to 2021 and I expect that the global economy will see an upturn in the second half of the year, by which time we should see ongoing vaccination programs take effect,” Diess told executives in an internal webcast Monday, according to remarks seen by Bloomberg News. “Then I expect people to buy more cars. We should prepare for a significant upturn.”

Analyst after analyst said that 2020 would leave an indelible mark on the automotive industry, specifically how new cars, trucks and utility vehicles are sold. Toyota and its luxury unit, Lexus, are proving them right. Each company unveiled new retail “experiences” today, Toyota with “SmartPath” and Lexus its “Monogram” program. The goal is to allow potential buyers a flexible experience starting with the internet, giving them as much or as little “personal” touch as they desire.

Volkswagen is looking into buying chip supplies directly from manufacturers, according to a company executive, as automakers battle a global semiconductor shortage. “We are thinking about entering direct contractual relationships,” said the executive, who declined to be named. “The industry will have to react due to the significance of semiconductors with regard to vehicles today.” Automakers around the world are adjusting assembly lines due to the shortages, caused by manufacturing delays that some semiconductor makers blame on a faster-than expected recovery from the coronavirus pandemic.

Nissan Motor has suspended some truck production in the U.S. state of Mississippi due to a shortage of chips, a Nissan USA spokeswoman said. The Japanese automaker has had to make short-term production adjustments at its North American operations due to the shortage, beginning with three non-production days on the truck line at its Canton, Mississippi, facility, she said. Source: Reuters

Mazda Motor Corp. is considering cutting its global output by a 34,000 vehicles over the next two months due to a chip shortage, two sources familiar with the matter told Reuters on Wednesday. Last week, Mazda was considering cutting output of models that include its CX-5 and CX-30 crossovers, as well as the Mazda 3 sedan, due to a shortage in supplies of chips used for brake systems and safety components, said the sources, who declined to be identified. The company plans to reduce its domestic output of the CX-5 by around 3,900 vehicles this month, they said.

General Motors Co became the latest automaker hit by the global shortage of semiconductor chips as the U.S. automaker said on Wednesday it will take down production next week at four assembly plants. GM said it will cut production entirely during the week of Feb. 8 at plants in Fairfax, Kansas; Ingersoll, Ontario; and San Luis Potosi, Mexico. It will also run its Bupyeong 2 plant in South Korea at half capacity that week.

A shortage of auto chips could impact 672,000 units of global light vehicle production in the first quarter, data firm IHS Markit said on Wednesday, warning that the disruption could extend into the third quarter. Ford Motor Co, Toyota Motor Corp, Fiat Chrysler Automobiles and Nissan Motor Co had cut output due to the shortage, while Volkswagen has said the supply constraints would impact production at some of its plants in February.

Daimler AG will split up into the world’s largest makers of luxury cars and commercial vehicles, renaming itself Mercedes-Benz and listing its truck unit separately by year-end. The plan to distribute a majority of Daimler Truck to shareholders is the German manufacturer’s most significant shake-up since the sale of Chrysler almost 14 years ago. Bloomberg News reported earlier that Daimler was considering the listing.

One of many issues preventing the wider adoption of hydrogen fuel-cell vehicles is that they’re tied closely to an infrastructure that’s been painfully slow to develop. Another is that the fussy high-pressure tanks required to store enough hydrogen in fuel-cell vehicles take up a lot of space—space that’s more awkward to plan around than a big battery pack.

California’s Karma Automotive has revived a solution to both of those issues. It announced that it’s collaborating with Denmark-based Blue World Technologies to explore using a fuel-cell system with onboard methanol reforming to power “a variety of future passenger and light commercial vehicles.”

Put simply, Blue World’s technology uses methanol potentially captured from landfills, and makes hydrogen with it through a system on board the vehicle. It then uses that hydrogen to power a fuel cell—with a battery buffer—that in turn powers motors to move the vehicle.

Such vehicles might claim zero tailpipe emissions, although they wouldn’t be zero-emissions. The fuel-cell system uses high-temperature PEM technology and methanol-to-hydrogen reforming. That’s an energy-intensive process that is more efficient than burning gasoline but not nearly as efficient as large scale hydrogen production or an electric car using batteries.

However, methanol can be made using renewable sources “ensuring a CO2-neutral proposition” in a well-to-wheels sense, Blue World notes—a controversial position in itself. Generally, any criteria emissions of the sort that cause smog or local air quality issues are very low compared to any kind of combustion, however.  The company says that such renewable methanol might come from biomass, biogas, or municipal waste.  Blue World also notes that with a typical vehicle tank of 75 liters (less than 20 gallons), a 600-mile range or more is possible. Methanal could be dispensed as a liquid, via equipment that isn’t vastly different than that used for gasoline.

Karma will test a version of its GS-6 plug-in hybrid over the next few months, both in the U.S. and in Denmark. The GS-6 is a more affordable model for Karma, slotting below a revamped version of the Revero GT flagship. Both are essentially continuations of the vehicle once known as the Fisker Karma.

Volvo tried a similar test on a prototype battery electric version of its C30 more than ten years ago, with gasoline instead of methanol, and wasn’t pleased with the conclusions about the end result’s carbon footprint. Nissan has also tested a system with an onboard reformer, using ethanol as the fuel, and has noted that such a system might only be suitable for larger vehicles.

With Karma, many things seem to come full-circle. Quantum Technologies, the former company that originally developed the system that Fisker Automotive licensed for the Quantum, was also a producer of fuel-cell systems, and did some of the pioneering work for high-pressure hydrogen storage.