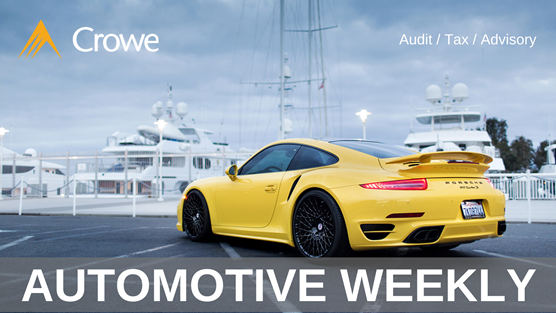 Crowe MacKay LLP is the only Canadian member of Auto Team America, a group of CPA firms that provide professional services to a very large number of Dealerships. Our firm’s Lead Automotive Partner, Conven Tang, participated in a recent meeting. It was the first in person meeting in two years, this week features part 2 of his notes. If you wish to learn more on any of the points contact Conven in our Edmonton office.

Japan's Toyota Motor Corp on Monday said it missed its global production target for April as COVID-19 outbreaks and a parts shortage slowed its post-pandemic recovery. The world's largest automaker by sales produced 692,259 vehicles last month, a 9.1% drop from the same month last year, and falling short of an earlier plan of making about 750,000 vehicles worldwide. The numbers raise questions over the severity of the pandemic-hit supply chains and how the disruption will affect production in the coming months.

Toyota Motor Corp on Friday cut its global production plan for June for the second time this week and signalled its full-year output estimate could be lowered, highlighting the pain from the supply chain crunch and China lockdown. Global automakers' production has been hit by the microchip shortage and also by China's COVID-19 lockdowns. The reduction by Toyota - broadly seen as a bellwether for Japan Inc - comes a day after data showed car sales in China, Europe and the United States remain weak.

As most Blue Oval fans are painfully aware, the automaker discontinued all of its sedans over the past couple of years amid a strategic pivot to crossovers, SUVs, and trucks. While declining sales justified this decision, many still wish that the automaker would build and sell sedans, and those folks may just get their wish at some point in the future, at least in terms of a new Lincoln sedan, thanks to the automaker’s forthcoming EV pivot. “Sedans are popular in China, there’s still a healthy market and we are watching that very carefully. And it might be an opportunity for us here as well,” John Jraiche, Global Lincoln Product Director, said while speaking at the reveal event for the all-electric Lincoln Star concept.

The Star was built on Ford’s flexible rear- and all-wheel drive EV architecture, which is one of two new EV platforms – GE2 and TE1 – currently in the works for a host of future new and second-gen versions of existing all-electric models. Ford specifically designed these platforms to be very flexible so that they can underpin a wide variety of vehicle types, including active lifestyle vehicles, cargo vehicles, mid-size trucks, rugged SUVs, larger two- and three-row crossovers, and full-size trucks and utility vehicles.

Meanwhile, the Lincoln Continental was discontinued back in November of 2020, marking the end of an era for Lincoln sedans in general. Just a month prior, Ford Authority reported that the luxury brand had no plans to produce another sedan any time soon, but it seems as if the automaker is a bit more open to that possibility now, nearly two years later. Given how popular the new Lincoln Zephyr has been in China and how well-received it is among American fans pining for another Lincoln sedan, perhaps that shouldn’t come as a huge surprise.

Buick plans to stop selling gasoline-powered vehicles in North America by the end of the decade after rolling out a full lineup of electric vehicles that will revive the Electra name from its heyday. The brand will go all-EV in roughly the same time frame as Cadillac and push General Motors closer to its goal of having all light vehicles it sells be fully electric by 2035. Buick, which also updated its logo Wednesday to signal the coming overhaul of its lineup, does not plan to launch any new internal-combustion vehicles after 2024, when its first EV is scheduled to arrive.

Electric vehicle sales are poised to more than triple by 2025, and yet governments and manufacturers need to lean even harder into eliminating emissions from road transportation by the middle of this century, according to BloombergNEF. The research firm lays out the stakes and calls for action in its seventh annual Long-Term Electric Vehicle Outlook, released Wednesday. BNEF’s analysts deem EVs “a remarkable success story,” predicting plug-in passenger vehicle sales will soar to 20.6 million in 2025, much higher than its 14 million forecast just a year ago, mainly due to faster uptake in China.

The Lightning is the first EV sold in the US with bi-directional charging capability enabled to supply electricity back to homes and the grid. On this day, Ford had not yet handed over electric trucks to the grape growers — it has a backlog of some 200,000 orders. (A week later, the company delivered the first Lightning to a customer in Michigan.) But the family-owned farms’ embrace of this 21st century rural electrification initiative indicates the prospects for transforming battery-powered pickups into vehicles to decarbonize the economy and build resilience against climate change.

The United Auto Workers union is accusing a new General Motors joint venture of denying access to workers to conduct a preliminary organizing vote. UAW Vice President Terry Dittes, in a letter to union leaders Tuesday obtained by CNBC, said leaders of the joint venture between GM and LG Energy Solution, called Ultium Cells, have “flat out rejected” the union’s proposal of a “card check agreement” to organize. Dittes said the agreement would allow union officials into the joint venture’s battery plant in Ohio to collect organizing cards, as one of the first steps to establishing UAW representation at the facility.

General Motors Co on Wednesday said it will sharply cut prices on its electric Chevrolet Bolt after the Detroit automaker had halted sales for six months following a battery recall. GM is cutting prices on the Bolt by around $6,000 and by as much as 18% for the lowest-price version, which will start at $26,595, down from $32,495. The Bolt EUV will start at $28,195 down from $35,695.

Ford Motor Co. Chief Executive Officer Jim Farley doesn’t see a need for traditional advertising for his company’s electric vehicles – if they’re good enough to sell themselves. But Farley isn’t looking to do away with dealers, who he contends could be a competitive advantage. He sees their role changing to focus on service after the sale. He also believes dealers will have to do 100% of sales online, with no-haggle pricing.

Surging battery prices and shortages of metals and materials are likely to last for some time, Toyota Motor Corp.’s chief scientist warned, trends that could weigh on the world’s embrace of electric vehicles. The shift to EVs over the past decade has been driven by steadily falling battery prices, a dynamic that’s enabled plug-in vehicles to travel longer at costs approaching those of gasoline-powered cars. Now, manufacturers are running low on supplies of lithium, nickel and other key battery inputs, with trade frictions and the war in Ukraine exacerbating issues and forcing prices higher.