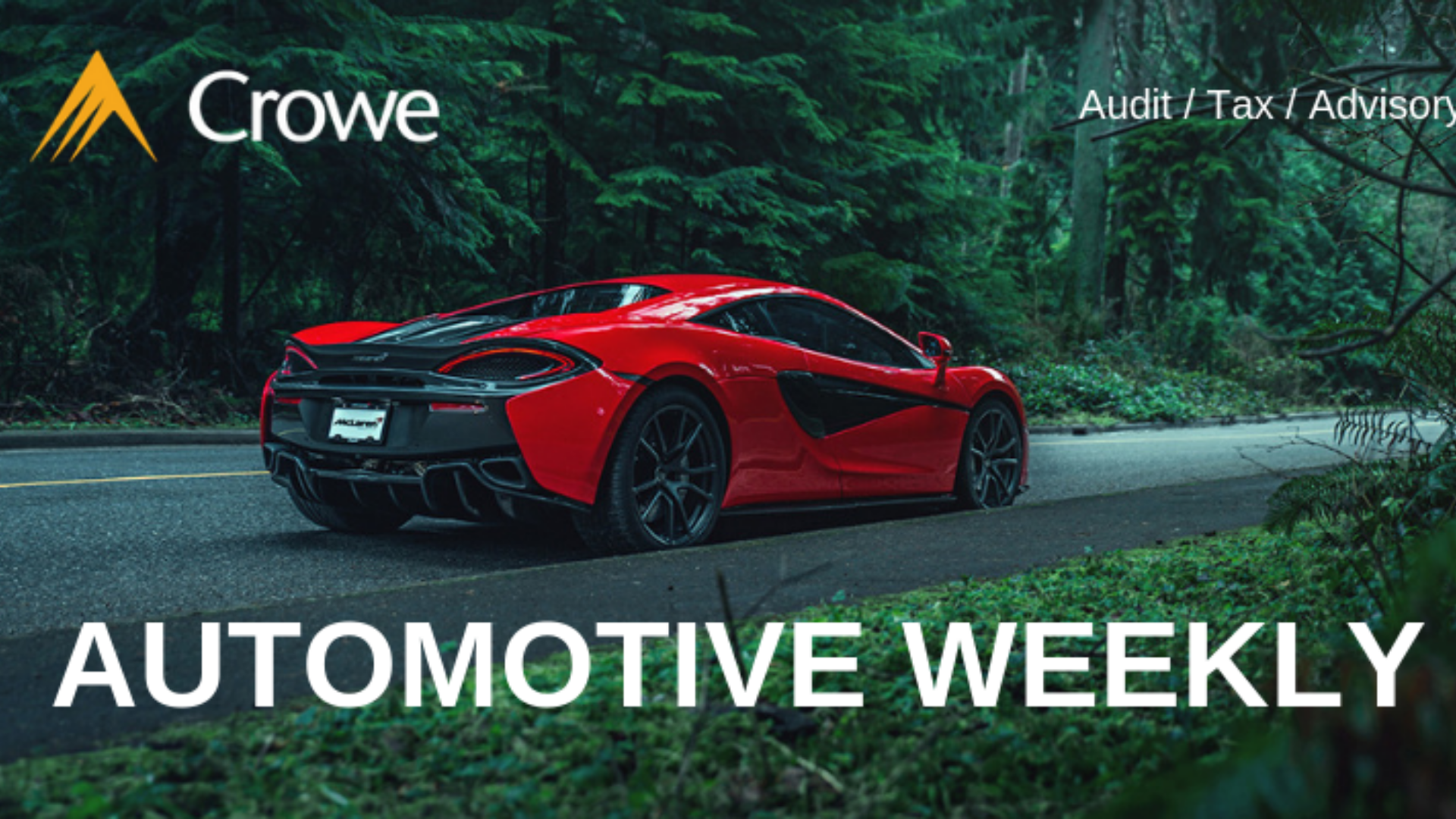 In an Amazon World

IN AN AMAZON WORLD

In an Amazon world where everything can be purchased online and delivered to your doorstep, it’s understandable if auto dealers feel threatened by an emerging new model that streamlines the vehicle purchase process and bypasses some of their traditional functions. But Deborah Wahl, chief marketing officer for General Motors, says the automaker’s 4,100 U.S. dealers will play an important role in remaining the automaker’s face to the consumer, whether that consumer wants a fully digital, virtual transaction or a conventional experience that involves face-to-face meetings with the sales team and kicking the tires.

General Motors Co. will halt production at several North American factories and extend shutdowns at some others because of a protracted shortage of semiconductor chips that is disrupting the auto industry’s hopes for a bounceback this year. The auto maker said Thursday that three plants previously unaffected by the chip shortage will be idled or have output reduced for one or two weeks, including a factory in Tennessee and another in Michigan that make popular midsize sport-utility vehicles. Vehicles affected include the Chevrolet Traverse SUV, and the Cadillac XT5 and XT6 SUVs.

Ford Motor Co on Wednesday outlined another series of plant shutdowns due to the global semiconductor chip shortage, with five facilities in the United States and one in Turkey affected. The No. 2 U.S. automaker did not outline how many vehicles would be lost in the latest actions, and reiterated it intends to provide an update of the financial impact of the chip shortage at its quarterly earnings on April 28.

In a meeting with top automotive and technology executives today, President Joe Biden reaffirmed his commitment to protect the supply chain that produces semiconductors for manufacturers across the U.S. General Motors CEO Mary Barra, Ford CEO Jim Farley and Stellantis CEO Carlos Tavares joined 16 other executives at a meeting Monday to provide the Biden administration — including the president himself — with information about what they need now and in the future.

Although officials warned to not expect much in terms of immediate help, Intel CEO Pat Gelsinger said the company is talking with the automakers about producing chips for them within six to nine months. Although company officials said last month it would add new capacity and build new factories in the U.S., Gelsinger said the company would get its existing network to provide help sooner for automakers. “We’re hoping that some of these things can be alleviated, not requiring a three- or four-year factory build, but maybe six months of new products being certified on some of our existing processes,” Gelsinger said. “We’ve begun those engagements already with some of the key components suppliers.” Without naming specific suppliers, he said that the work could take place at Intel’s factories in Oregon, Arizona, New Mexico, Israel or Ireland, Reuters reported.

Although not as good as getting a surprise load of chips to send to various plants, the automakers did offer the requisite appreciation for being heard.

An ongoing shortage of crucial semiconductors is the only factor weighing on a global recovery of the car sector from the coronavirus crisis, Herbert Diess, chief executive of Volkswagen AG, said on Thursday. Demand is picking up in the United States, Brazil and China, Diess said at the Hannover Messe trade fair, adding the world’s second-largest carmaker was also working through high order intake in Europe.

THE NEXT SUPPLY CHAIN ISSUE?

As automakers continue to grapple with a semiconductor shortage, some experts say the next supply chain crisis for the U.S. could involve lithium-ion batteries. As companies like GM, Ford and a slew of start-ups ramp up their electric vehicle ambitions, current battery production in the U.S. won’t be able to keep up with demand. Though the U.S. has a handful of large-scale battery manufacturing facilities, including Tesla’s Gigafactory that operates in partnership with Panasonic, a trade dispute between two Korean battery makers, LG Chem and SK Innovation, threatens the future of a new battery factory in Georgia.

Good new, this particular trade dispute is now settled, so there is one less battery obstacle.

Rolls-Royce Motor Cars had its best quarter in its116-year history, setting a sales record in the first quarter as the world’s wealthy snapped up its $330,000 SUV and other models. The luxury car company, which is owned by BMW, delivered 1,380 cars in the first quarter, up 62% from the same quarter in 2020 as the pandemic started impacting sales and manufacturing. The quarter set a record for the company, surpassing its previous high in 2019.

Luxury brands raced out of the gates in the first quarter, a time of year when they typically underperform following their seasonal year-end marketing programs. Overall, U.S. luxury sales rose 20 percent to 547,903 cars and light trucks in the quarter, significantly outperforming the broader industry's 12 percent increase. With the premium surge, the annualized light-vehicle sales pace in March jumped to 18.1 million, according to Motor Intelligence.

For years, companies have been using cookies — that is, small text files stored on the browser that keep track of website visits — to monitor consumers’ online behavior. Cookies can provide rich data that helps brands get a better sense of who their customers are and enables them to target those customers with more relevant offerings. But this personalization comes at a cost: Consumers are increasingly concerned about who is collecting this data, how much of their behavior is being tracked, what companies are doing with that information, and who they may be selling it to.

DEALERSHIP CUSTOMERS CAN SURPRISE YOU

Car dealership customers can surprise you, says Todd Skelton, president and CEO of the Prime Automotive Group that runs 56 stores in New York, New Jersey and greater New England. He gives this example of unexpected consumer behavior: When COVID-19 hit, Prime rushed to put together a program of going to customers’ homes so they needn’t go to the dealership during the pandemic. “We suggested to customers that we come to them,” says Skelton. “But they still wanted to come to the dealership. Seventy-five percent wanted to test drive cars.”

Automakers struggling with pandemic-induced plant shutdowns and a global chip shortage are now confronting another supply chain headache: dwindling rubber supplies. Snarled shipping lines are disrupting the movement of natural rubber, a key material used in tires as well as components under the hood. With the global supply already running short following stockpiling by China and a devastating leaf disease, rubber prices are on the rise and some U.S. auto suppliers are rushing to secure shipments before the market gets squeezed further.

About 770 hourly workers at General Motors Rochester Operations plant in New York are in a fight for their future. In some ways, they exemplify what other GM factories could face as the auto industry's landscape shifts towards a technologically new world that'll be home to electric vehicles. GM Rochester Operations will soon lose hundreds of jobs to outsourcing. Bubbling underneath that loss is GM's shift to building all-electric cars over the next decade, which puts a plant such as Rochester, where GM makes fuel system-related components for internal combustion vehicles, on the endangered list.

Consumer interest in purchasing an electric vehicle has doubled in the past three years but Tesla's dominance in the segment is at risk, according to a study released today by car buying and research site CarGurus.com. That positive sentiment towards EVs is tempered, however, by a large percentage of respondents who said certain conditions must change before they would consider the switch.

Ford Motor Co. is delaying by three months return-to-work plans for most of its U.S. salaried employees amid a surge in virus cases in Michigan. The automaker previously planned to allow non-place-dependent workers the opportunity to return to the office starting in July and confirmed the timing as recently as last month when it announced a new hybrid work model.