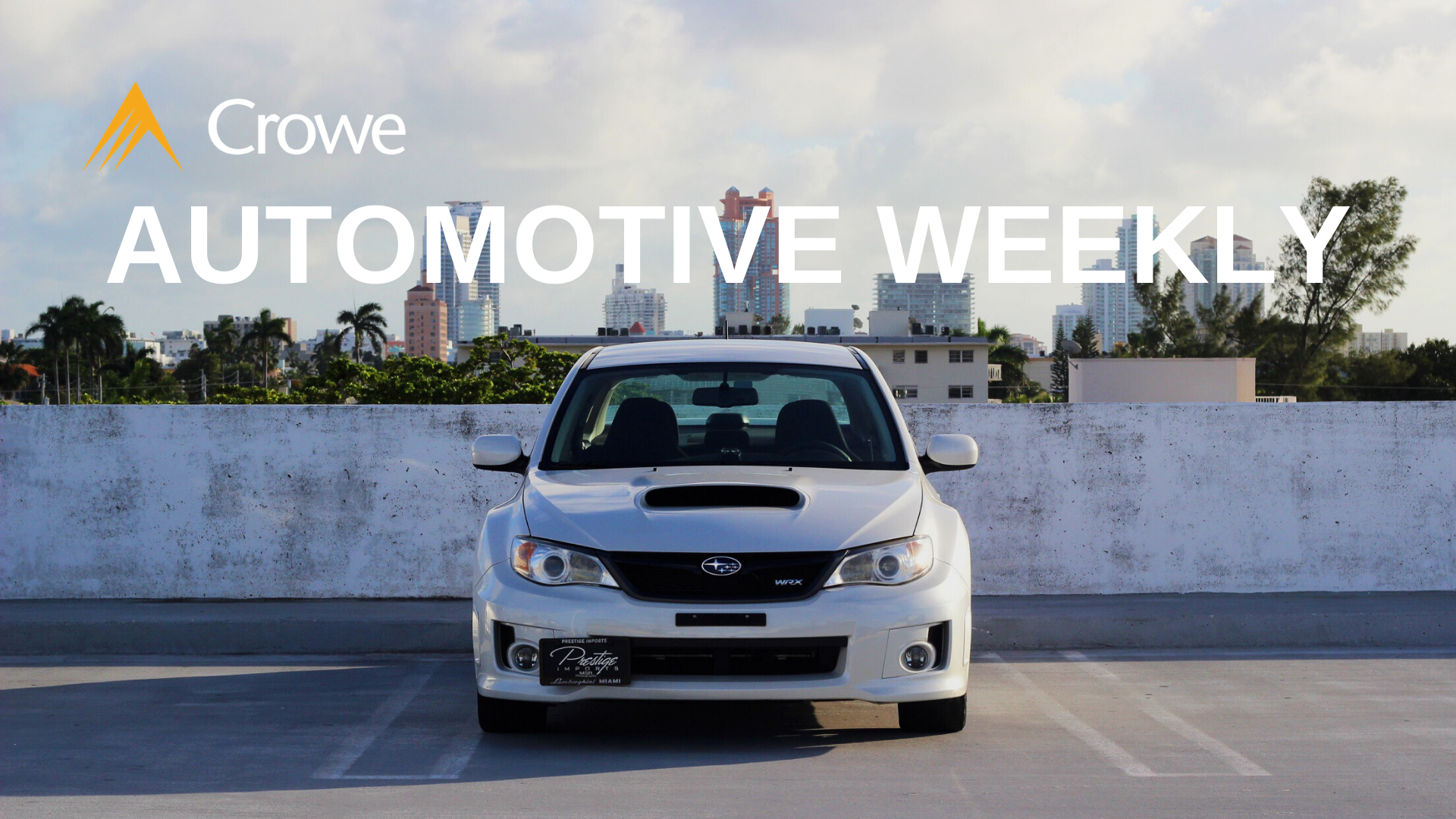 Perhaps it’s a question you asked a dealership manager or store colleague this summer when used-vehicle values were as hot as the outside temperature. “Can you believe what we had to give on that trade?” Well, in what might be good news for dealers’ used departments, trade-in values are returning to normal levels after skyrocketing during the summer months, according to the newest data from Edmunds released on Thursday. Edmunds data showed that the average value for all vehicles traded in during October dropped to $15,874, a 3.3% decrease compared to $16,411 in September.

DEALERSHIPS HAVE FEWER VEHICLES TO SELL. SOME LIKE THIS 'NEW NORMAL'

A "new normal" of fewer vehicles on dealership lots could be taking shape as the auto industry rebounds from the pandemic. And that means new-vehicle buyers might not find the SUV in their favorite color, or be faced with putting money down on a truck that's missing some of the options they want. Consumers depleted stocks following the two-month auto production shutdown this spring caused by the coronavirus outbreak. As a result, transaction prices are at record highs because demand still exceeds supply.

Ford Motor is “absolutely” interested in following Tesla and General Motors in producing its own batteries for electric vehicles, new CEO Jim Farley said Friday. The comments are a reversal from Farley’s predecessor, Jim Hackett, who told investors in July that the automaker saw “no advantage” in producing the batteries instead of purchasing them from a third-party supplier. Farley succeeded Hackett on Oct. 1. Farley said Ford is looking at producing EV batteries, including the complex cells that power the vehicles, but no plans have been finalized.

Mercedes-Benz is giving its U.S. retailers greater control over how they manage regional marketing funds and how they execute their digital sales efforts. The luxury automaker will jettison its Tier 2 marketing program next year, unwinding established industry advertising practices to instead let dealers spend as they see fit. The move marks a bold step by Mercedes-Benz USA's marketing chief, Drew Slaven, who is filling in as the automaker's interim CEO until the end of the year. The plan also signals that the U.S. industry's long-standing practices on second-tier marketing funds are facing some disruption.

Carlos Tavares, CEO of French automaker Groupe PSA and future head of its merger with Fiat Chrysler Automobiles NV, says the parent of Peugeot, Citroën and Opel vehicles is no longer spending on internal combustion engine programs. "That's clear," Tavares said on the subject during the Reuters Automotive Summit teleconference. "We are not investing more." The company is adapting to the likely reality of the European Union banning the sale of new vehicles with internal combustion engines sometime between 2030 and 2040, said the soon-to-be CEO of the tie-up Stellantis, though Europe isn't the only place looking to do so.

As COVID-19 cases surge to record levels and the state of Michigan prepares to enact a new round of restrictions aimed at stopping the spread of the virus, Detroit's automakers hope the success so far of their safety protocols will allow them to keep plants open and production running. The automakers already went through an eight-week plant closure in the spring, prompted by concerns of rank-and-file United Auto Workers members and reinforced by shutdown orders from Gov. Gretchen Whitmer.

NADA CHAIRMAN LASHES OUT AT AUTOMAKERS OVER ‘MAUSOLEUM MANDATES’

The Covid-19 pandemic has put the move to digital world on “hyperdrive” according to the chairman of the National Automobile Dealers Association and the result is likely to be an escalation of a decades-long battle between dealers and automakers. Speaking to a virtual meeting of the Automotive Press Association, NADA Chairman Rhett Ricart pointed to the move towards doing more business online as further evidence against what he called “mausoleum mandates” by automakers that force dealers to make costly investments to enlarge and enhance their showrooms.

Hyundai Motor Co is being sued over a string of battery fires in its electric vehicles (EVs), just as General Motors Co GM.N recalls nearly 70,000 EVs with batteries from the same maker, LG Chem Ltd. EV sales are climbing globally as the technology holds out the promise of cleaner transportation, with costs falling and driving ranges increasing. But the emerging risk of fire from overheated batteries could set back the entire industry. Recalls could mean reputational as well as financial damage to Hyundai and other automakers, which are pushing into the EV market to meet tougher emissions regulations and to challenge market leader Tesla Inc. The problems could also dent consumer demand for EVs.

Buick ranked as the top mainstream brand and Jaguar won in the premium brand category as future vehicle value forecaster ALG named the winners of the 2021 Pre-Owned Value Awards, or POVAs. ALG, which is the analytics subsidiary of TrueCar Inc., awarded its 2021 POVAs to vehicles with the lowest forecast depreciation from two to five years of age, during the period of 2020 to 2023. ALG chief industry analyst Eric Lyman said Buick and Jaguar provide the best of both worlds to consumers. He said that includes luxury and quality along with the value and peace of mind of certified pre-owned program benefits.

Nissan Motor Co is "absolutely not" in talks to sell its stake Mitsubishi Motors Corp, Nissan's chief operating officer said on Monday, following a report the carmaker was considering pulling out of its alliance partner. “We are not in any discussion or consideration of changing the capital structure in our partner companies. We are moving ahead with many projects,” Ashwani Gupta said in an interview at the Reuters Automotive Summit teleconference.

TESLA, LUCID, RIVIAN AND OTHERS UNITE

As the U.S. heads into a new Presidency and a new Congress, a group of electric vehicle makers and other stakeholders have allied to coordinate all the aspects that will foster real growth for EVs in America. Called Zero Emission Transportation Association (ZETA), it has a stated goal of enabling 100% electric-vehicle sales—including light-duty, medium-duty, and heavy-duty vehicles—by 2030. ZETA counts Tesla, Lucid, Rivian, and Lordstown Motors among its members. Each of these companies is all-electric, and is building or planning to build electric vehicles in the United States. Electric bus maker Proterra is also part of the organization, as is Arrival, which is building an electric-bus factory in South Carolina.

In addition to vehicle manufacturers, the roster includes Uber, charging networks EVgo and ChargePoint, charging-equipment manufacturer Enel X, and utilities Con Edison, PG&E Corporation, and Duke Energy. ZETA will likely function primarily as a lobbying group, pushing federal policymakers to enact measures favorable to electric vehicles. That includes lifting the 200,000-unit production cap for the $7,500 federal EV tax credit, and making the credit available at "point of sale." That means the amount is immediately deducted from the purchase price, rather than credited when buyers file their taxes.

Other policy goals include incentives for trading in gasoline or diesel vehicles, and federal emissions standards that would send the "correct market signals" to manufacturers on electrification. A revived "Cash for Clunkers" program was mentioned as part of President-elect Joe Biden's green agenda during the campaign, although it's unclear if that would include commercial vehicles. Stricter European Union emissions standards have led to increased EV production for the European market, so perhaps that could be replicated in the U.S.

The goal of 100% electric-vehicle sales by 2030 is fairly ambitious, considering that only California has discussed banning sales of internal-combustion vehicles so far—and not until 2035. California's powerful Air Resources Board, under Mary Nichols, had already pushed toward 100% zero-emission vehicles (including plug-in hybrids) by 2030. Although that has been sidelined somewhat by challenges from the Trump administration, Nichols is on the shortlist to be EPA administrator under the Biden administration.

It's worth noting that no automaker that makes internal-combustion vehicles is a member of ZETA. As the organization progresses, will full-line automakers that have cooperated with California's goals, like Ford, BMW, Honda, Volkswagen, and Volvo, join? The group won't say yet; but with full-on commitments to transition away from internal combustion, that might just happen.

General Motors is relaunching an auto insurance division as a way to generate new revenue using data from its growing numbers of connected vehicles in the U.S. The new business unit will be under the automaker’s OnStar connectivity brand. Starting Wednesday, coverage will be offered to about 1,000 GM employees in Arizona before rolling out to its 85,100 U.S. employees and the general public by the end of next year. GM previously offered its own auto insurance from 1925 to 2008.

Human motorists can be lulled into a false sense of security by new technology that's meant to assist — but never replace — them behind the wheel. This "automation complacency" has been cited as a contributing factor to several fatal crashes involving advanced driver-assist systems, and now the findings from a study conducted by the Insurance Institute for Highway Safety further spotlight the unintended pitfalls associated with the influx of these new technologies. Researchers with IIHS and the Massachusetts Institute of Technology's AgeLab found that as drivers grew more comfortable with adaptive cruise control and lane-keeping features, they were more likely to show signs of inattention to the driving task. Sometimes significantly so.