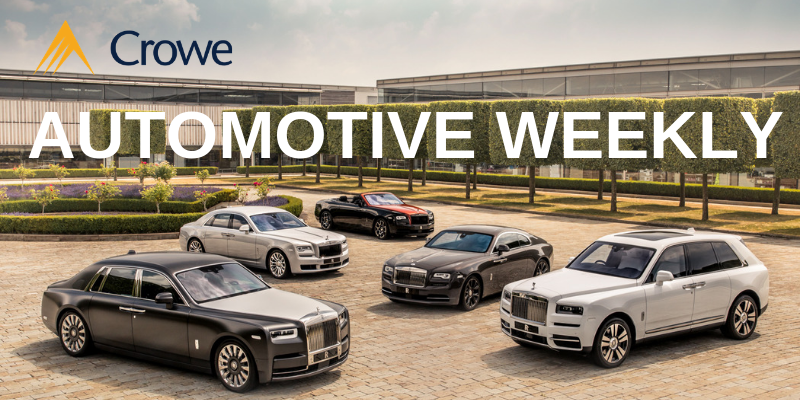 Hyundai Motor Co. is entering the fast-growing truck segment in the U.S. with a long-awaited compact pickup aimed at urban dwellers looking to get away for the weekend. The Hyundai Santa Cruz, which will start production at its Montgomery, Alabama, plant in June, is a shorter, squatter version of midsize trucks like the Ford Ranger or Toyota Tacoma, meant to squeeze into tight parking spots while still offering an open pickup bed and all-wheel-drive.

Renesas Electronics Corp. said it is aiming to resume shipments from its fire-hit chip factory at full capacity by early July, roughly in line with its previous target. The Japanese chipmaker suffered a fire at its facility in Naka, north of Tokyo, on March 19, exacerbating shortages in the technology supply chain as it recovers from the Covid-19 pandemic. The company, which restarted partial production at the plant over the weekend, had said previously it would need about 100 days to bring the factory back to full shipments.

Japan's Subaru to Suspend Production in Indiana on Chip Shortage

Japanese automaker Subaru Corp said on Tuesday that it was suspending production at its plant in Indiana through the end of April due to a global shortage of semiconductors. Automakers from Ford Motor to Nissan Motor have cut production due to the shortage of chips, used extensively in new cars for automatic windows, parking assistance and entertainment systems. A Subaru spokeswoman said 15,000 vehicles for North America would be affected.

AutoNation CEO Says Chip Shortage Could Drag On for a Year

The global semiconductor shortage that’s crippling the auto industry could drag on for as long as a year, according to Mike Jackson, chief executive officer of AutoNation Inc., the largest car-dealer chain in the U.S. AutoNation expects the industry’s vehicle shipments in the second quarter to be double what they were a year ago, but that’s barely enough to keep dealer lots full, Jackson, 72, said in an interview. Low interest rates, stimulus checks, and a desire for private transportation during the pandemic are fueling demand for vehicles, while assembly plants are sitting idle because of a lack of chips. AutoNation has been increasing used-car sales to make up for the lack of new supply.

Ford Motor Co. is planning more downtime at five North American factories due to a global semiconductor shortage, further disrupting output of a popular sport-utility vehicle and the F-150 pickup truck, the company’s biggest moneymaker. The Dearborn, Mich., auto maker said Wednesday that factories in Chicago, suburban Detroit and Kansas City will be idled for an additional two weeks, extending the closures through May 14. An SUV plant in Ontario will also take an extra week of downtime in early May.

Stellantis NV is planning to temporarily lay off workers at a Jeep plant in Detroit during April and May due to a shortage of semiconductor chips, the company confirmed. Stellantis will cut two work crews at its Jefferson North plant in Detroit for three weeks starting April 26, then call them back and lay off a third crew from May 17 through the week of May 31, according to a schedule obtained by Bloomberg News. The plant on Detroit’s east side normally operates two shifts with three work crews six days a week to keep it running 20 hours a day.

Used car prices in the U.S. are soaring. The Manheim U.S. Used Vehicle Value Index, a gauge of pricing trends, soared to a fresh record Tuesday as factors ranging from chip shortages to a rebounding economy conspired to keep pressure on automotive inventories. The index, which updates mid-month, rose by 6.8% in the first 15 days of April from the final March figure and jumped 52% from the same period a year ago to a level of 191.4.

By 2025, 96% of nameplates from Jeep, Ram, Dodge, Fiat and other Stellantis NV brands in the United States will have electrified options with all models offering a fully battery-electric option by 2030, CEO Carlos Tavares said Thursday during the company's first general shareholder meeting. The details are an early glimpse into how the newly created world's fourth-largest automaker expects to tackle "the No. 1 challenge of the automotive industry," Tavares said.

A federal judge in Michigan will hear arguments on Friday on whether to issue an emergency order forcing NXP Semiconductors to provide chips to a supplier of automaker Stellantis. The global automotive chip crunch started late last year, when automakers and their suppliers failed to understand they needed to put in orders months ahead of time as the consumer electronics industry surged and took up chipmaking capacity.

BMW AG reported better-than-expected first-quarter results after a broad car-sales rebound in all major regions, led by China. Earnings before interest and taxes from automaking operations surged to 2.24 billion euros ($2.7 billion) in the first three months, up from 229 million euros a year earlier, the Munich-based manufacturer said in a statement, citing preliminary figures. Profit also rose on firm vehicle pricing and high demand for used cars, BMW said. Carmakers are benefiting from a broadening recovery in demand that started in China. Daimler AG last week reported preliminary first-quarter earnings that were significantly better than expected, citing strong sales in all regions.

Twelve U.S. States Urge Biden to Back Phasing Out Gas-Powered Vehicle Sales by 2035

The governors of a dozen U.S. states including California, New York, Massachusetts and North Carolina called on President Joe Biden on Wednesday to back ending sales of new gasoline-powered vehicles by 2035, a dramatic shift away from fossil fuels. Biden's $2.3 trillion infrastructure plan calls for $174 billion in spending and tax credits to boost electric vehicles (EVs) and charging networks but does not call for phasing out gasoline-powered passenger vehicles.

General Motors and Ford Motor Co. have joined a group of more than 400 businesses calling for President Joe Biden to adopt a federal climate target to reduce emissions. In an open letter to the president, the businesses — which include Lyft, IHS Markit, Google, Amazon and other major corporations — are calling on Biden to set a target of cutting greenhouse gas emissions by at least 50 percent below 2005 levels by 2030. Biden is hosting a virtual climate summit with world leaders on Thursday and Friday, where the president is expected to announce an "ambitious" 2030 emissions target under the Paris climate agreement, which the U.S. rejoined in February. Biden has said he wants to put the U.S. on an "irreversible path" to achieve a carbon-pollution-free power sector by 2035 and net-zero emissions by 2050.

The all-electric Lyriq crossover will mark the beginning of the end for traditional internal combustion engines at Cadillac when the new EV arrives in dealer showrooms in the first half of next year. The Lyriq, Cadillac’s first EV, is the start of a new lineup of electric cars and SUVs for the brand as it plans to make all-electric vehicles exclusively by 2030, according to Rory Harvey, global vice president of Cadillac.

The company says advanced data analytics are speeding up development and engineering of new hypercar. The Hennessey Venom F5 hypercar has successfully completed the first of three development phases, and chief engineer John Heinricy has signed the car off for dynamic development. Venom F5 development began in February, concentrating on mechanical refinement, engine fine-tuning, steering and real-world aerodynamic validation, the company says. The tests took place at Hennessey’s test track in Sealy, Texas, as well as the 2.2-mile (3.5 km) runway of a former U.S. Air Force base in Arkansas. Even with the 6.6-liter twin-turbo Hennessey V8’s power being restricted to just 900 hp – half the claimed 1,817 hp output – the aero testing saw the F5 top 200 mph as part of its mid-speed refinement and coast-down program.

Hennessey Performance chief engineer John Heinricy (former Corvette high performance test driver) said that in his 40 years developing high-performance cars, nothing compares to the Venom F5. “We’re making excellent headway in our mission to deliver a world-class hypercar to our customers that handles superbly, while managing its phenomenal power and speed with finesse. “Every part of our development program is focused on making the Venom F5 the best it can be before customer deliveries start towards the end of this year. Our next phase is the most intense, concentrating on the car’s driving characteristics. We’ll split our testing between racetracks and Texas roads as we harvest data, refine every element and perfect this monster of hypercars.”

Hennessey Performance said that through an intense program of dynamic track and road driving, the second phase of development will determine the Venom F5’s agility, poise and driver feedback. The company says it is planning to spend hundreds of miles of testing throughout the summer. At places such as Laguna Seca and Circuit of the Americas. Here, the team will unleash that big V8, named Fury, while monitoring all facets of the cars’ handling via state-of-the-art telemetry and data-logging equipment.

John Hennessey, company founder and CEO, claims “almost all” of the Venom F5 24-car production run is already sold. “We’re focused on delivering an all-round hypercar to our customers that rivals the best in the world,” he said, adding that Heinricy’s engineering, racing and high-performance vehicle development skills “will shape the Venom F5’s dynamic capabilities to match its immense power.” The Amelia Island debut falls mid-way through the car’s development program. After this summer’s road and track testing the final phase will take place in the fall to refine the car’s full-power acceleration, high-speed stability and braking. Once the engineering team signs-off on final development, Hennessey hopes to see the car crack 311 mph.