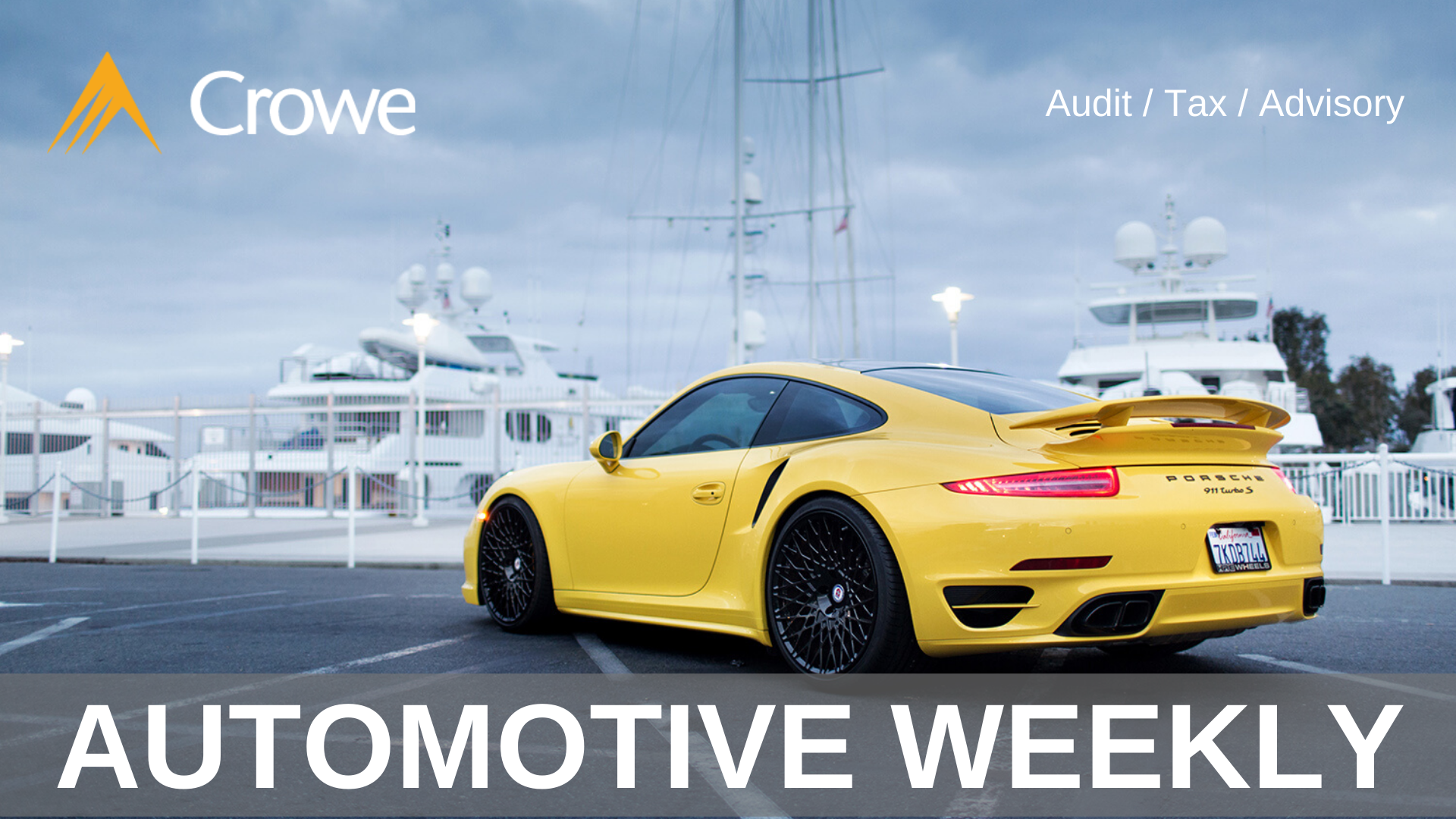 Ford Motor Co. will launch a new online used-vehicle platform and brand early next year called Ford Blue Advantage in a bid to give its dealers a larger slice of the used-vehicle sales pie. Executives detailed the plans to some 8,000 dealership employees during a three-day virtual meeting. The video format — which included presentations by Executive Chairman Bill Ford, CEO Jim Farley and other top officials — replaced the typical annual meeting that would have taken place in Las Vegas in September. The used-car platform was among the newest initiatives dealers learned about through prerecorded messages and live sessions.

Nissan Motor Co. is looking to breathe new life into its wheezing full-size pickup truck by electrifying it with the help of a Detroit-based startup, according to people familiar with the matter. The Japanese automaker is considering buying a battery-electric powertrain from Hercules Electric Vehicles for its Titan pickup and sharing parts for the startup’s own truck in a prospective strategic partnership, said the people, who declined to be named.

Cadillac dealers who don't see a place for themselves in the luxury brand's all-electric future can walk away with more than half a million dollars instead. General Motors last week showed the breadth of its commitment to electric vehicles as the future of Cadillac and its other brands, boosting its EV and autonomy budget by 35 percent through 2025. Cadillac's first full EV, the Lyriq, will launch in early 2022, nine months sooner than initially planned, and the brand expects to be selling only EVs by 2030, as long as GM feels the market is ready. Some dealers, on the other hand, aren't ready to make that shift — or to spend at least $200,000 on the chargers, tooling and training that GM is requiring. They have until Nov. 30 to decide whether they'd rather just get out instead.

The Covid-19 pandemic is changing an entrenched aspect of car shopping in America: finding your new ride on the lot and driving it home that day. For months, dealer stocks have been running about 25% thinner than normal, a hangover effect from two months of pandemic-related factory closures last spring. The shortfall is requiring many buyers to order their cars and wait a few weeks, running counter to the American car shopper’s desire for instant gratification, and dealers’ impulse to send the customer home in a new car that day. That change may outlast the pandemic as industry executives find that stocking fewer cars, amid high demand, has lifted profits for car companies and dealers alike.

Shares of embattled electric vehicle start-up Nikola Corp. fell by about 15% in pre-market trading after CEO Mark Russell failed to reassure investors that the company’s $2 billion deal with General Motors would still go through and that ousted founder Trevor Milton wouldn’t suddenly sell off his shares. During an interview Tuesday on CNBC’s “Mad Money with Jim Cramer,” Russell said discussions with GM about supplying fuel cell and battery technologies as well as an all-electric pickup are ongoing, but he wouldn’t comment much further than that.

VW CEO’S TENSIONS WITH BOARD REEMERGE OVER EXECUTIVES PICKS

Volkswagen AG’s chief is struggling to win support for his picks to fill top executive posts and is pushing the carmaker’s board to back more significant reforms, according to people familiar with the matter. Herbert Diess has proposed more than three candidates to succeed Chief Financial Officer Frank Witter that didn’t win backing from key stakeholders ahead of a vote by the automaker’s supervisory board, said the people, who asked not to be identified as the discussions were confidential.

WHEN IS A MERGER  NOT A MERGER?

The merger between Fiat Chrysler Automobiles and PSA Group to create Stellantis is being called a merger of equals by the two companies, but recently-filed documents confirm what many analysts have believed since the deal was announced last year: The combination is actually an acquisition of FCA by PSA, at least for accounting purposes. The information is in the prospectus filed last week by FCA with the Mercato Telematico Azionario and Euronext Paris stock exchanges to list the Stellantis shares after the merger.

OEMS AND THEIR EVOLVING EV STRATEGIES

It’s early in the EV game and traditional automakers are trying to figure out what their strategy should be. No one has figured out a winning formula yet and their strategies keep evolving. But they all know one thing: Tesla is way out in front and they’d better figure out a way to catch up fast. The EV business is expensive and capital intensive. Even the largest OEMs are struggling to play the game. Small automakers are partnering with big ones, such as Aston Martin going with Mercedes. And midsize OEMs are merging to become bigger players, for example PSA and FCA. This is also why some giant OEMs are hedging their bets by partnering with startups – GM with Nikola, Ford with Rivian.

Taking a page from the automaker’s ad slogan of the 1980s and ‘90s, Ford’s new chief executive, Jim Farley, is aiming to rein in rising warranty repair costs that are a key reason why the Dearborn, Michigan, automaker’s financial performance in North America has lagged that of its archrival, General Motors Co. As part of its new effort to cut warranty costs, Ford has told suppliers it will charge them upfront for half the cost of a warranty problem. Suppliers might get some of the money back if they resolve problems more quickly.

PLUG-IN CARS COME UNDER FIRE FOR EMITTING MORE THAN ADVERTISED

Plug-in hybrid cars put out far more CO2 in real-world driving than in tests that determine emissions compliance and ratings advertised to consumers, according to a group urging governments to roll back support for such models. Three of the most popular plug-in hybrids – BMW’s X5, Volvo’s XC60 and Mitsubishi’s Outlander – exceed their advertised carbon-dioxide emissions ratings by as much as 89% when tested on a fully charged battery, Brussels-based Transport & Environment said Monday. The advocacy group doesn’t accuse automakers of wrongdoing but says its study exposes flaws in existing laws.

EVS GET HAMMERED ON RESIDUAL VALUES, FOR NOW

The folks over at the Mach-E Club forum snagged some alleged documents from Ford to dealers saying dealers should expect about a 40 percent residual value on the new EV after three years and near 30 percent by year four. That puts a $60K Mach-E at about $18,000. An average car loses about 25 percent in the first year, and 15-18 percent from years 2 to 6, according to Black Book. Overall, residual values average about 52 percent over 36 months. But the Mach-E isn’t alone in this depreciation, as many EV owners are learning the same thing.

There are several reasons for the phenomenon. First is the $7,500 tax credit. The first buyer takes it, the second buyer does not. Continued weak demand for EVs also comes into play. Demand is rising but at a very slow pace. In 2019 EVs only enjoyed a 2.5 percent market share. The less likely a vehicle is to sell again, the less the residual value. It does seem like range makes a difference, and here the Mach-E does well. The lowest range trim gets you more than 200 miles on a charge. More efficient ones get near 300.

The Kia Soul EV, with a 111-mile range, has a residual of just 29 percent of its original value over three years, according to Kelley Blue Book. The Nissan Leaf (150 miles) is at 34.3 percent; the Hyundai Ioniq Electric (124 miles) is 35.5 percent; the Chevy Bolt, with its solid 238-mile range, comes in near the Mach-E’s expected rate at 41 percent.

The next few get better. The Audi E-Tron (248 miles) holds 52.5 percent of its value; the Tesla Model X (295 miles) is at 52.7 percent; the Jaguar I-Pace is one tick higher at 52.8 percent and the leader is Model 3, which holds 64.3 percent of its original value. It seems like Ford is overestimating how much value these longer-range Mach-Es will hold. Again, we remind you these are calculated from sticker price, not from price after tax credit.

The electric Fiat 500e and BMW i3 are closer to the Soul than the Teslas. But all these values are going up, if slowly, and range is key

Ford noted that “standard lease residual values for Mach-E are comparable to other EVs.” True. The brand also said it is “offering customers several options to finance the all-new Ford Mustang Mach-E in a way that best meets their needs. These include a traditional Ford Red Carpet Lease or our Ford Options product that puts the customer in control of the Federal Tax Credit and allows them at contract end to buy the vehicle, return it or renew into their next Ford product.”

Just like everything with electric cars—range, charge speed, market share—we expect residual values to go up in time as these vehicles are more widely adopted and accepted. Check out the Mach-E Club for a few more lines of residual values in the Mach-E’s various trims.

Tesla CEO Elon Musk said an electric car with 435 miles of range is coming soon, and that Tesla is considering a hatchback model for Europe, Bloomberg reported Tuesday. Addressing a European battery conference, Musk said improved  versions of existing Tesla models would achieve that new range benchmark, adding that a long-term development goal is to reach 1,000 kilometers of range—equivalent to 621 miles. Because Musk was speaking to a European conference, it's unclear whether he was referring to EPA-rated range, or the European WLTP testing cycle.

Granted, the difference between the two testing protocols isn't that great on Tesla terms. According to Tesla's website, the current WLTP range for the Model 3 Long Range is 580 kilometers (360 miles), compared to 353 miles in the U.S. Most of Tesla's lineup got a range boost rather recently. All versions of the Model 3, Model X, and Model Y got range increases of varying amounts, according to Tesla's website.

Prior to that, the Model S Long Range Plus got an EPA-rated of 402 miles, making it the first production electric car to break the 400-mile range barrier. The Model S Plaid variant arriving in 2021 is expected to have a 520-mile range. For perhaps the first time, Tesla is under pressure to increase range, as the Lucid Air is being advertised with a maximum 517-mile range.

In the same talk, Musk also suggested a vehicle with a 620-mile (1,000-km) range was being developed, and hinted that Tesla's new German factory could build smaller cars aimed at the European urban market, possibly including a hatchback.

This jibes with a previous Musk statement that Tesla would launch a $25,000 small car by 2023, with battery advances enabling that lower price point.