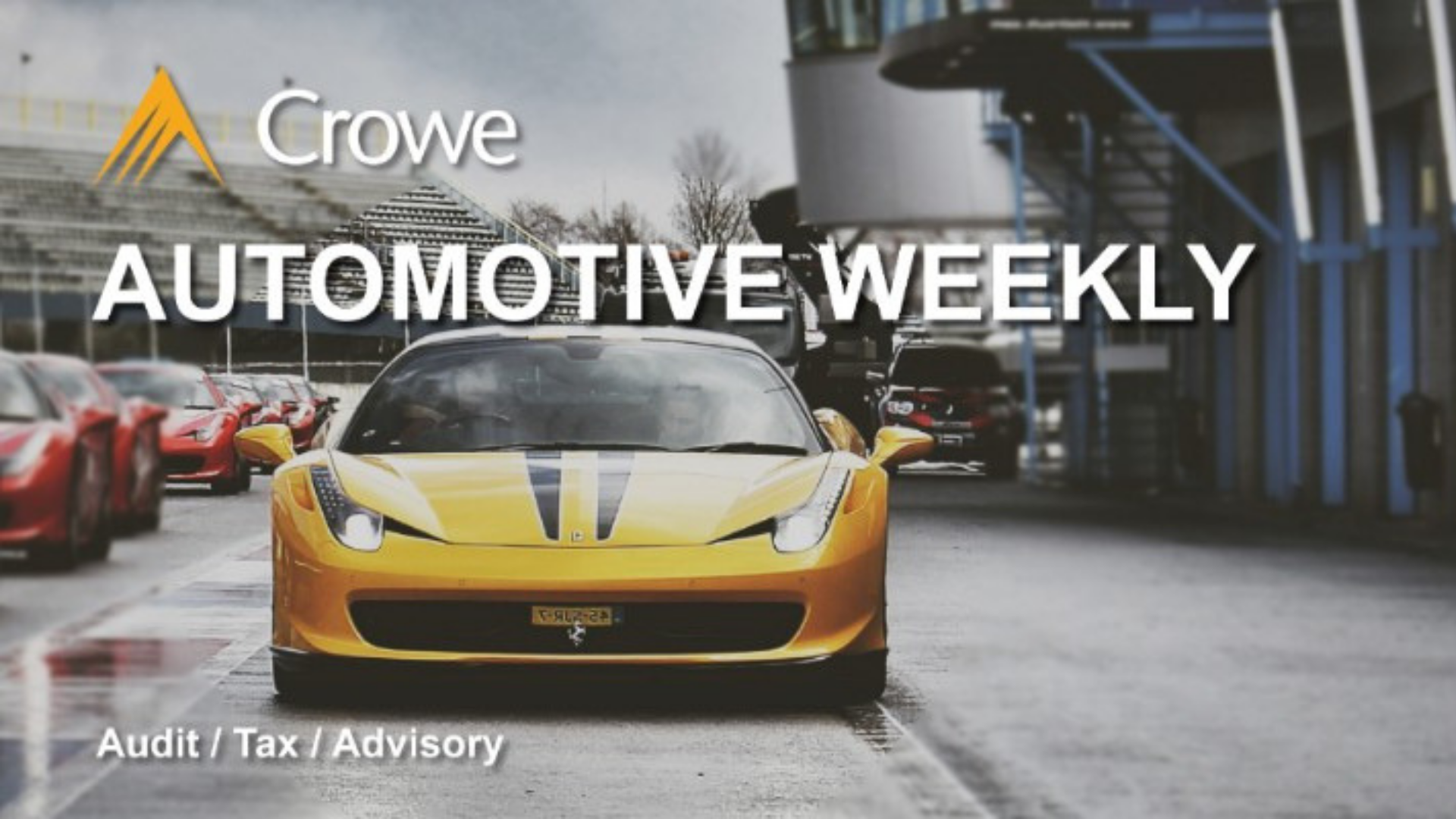 HYBRIDS VS. ALL ELECTRIC VEHICLES

Hybrids largely beat out all-electrics in a new ranking of the most "environmentally friendly" cars, even as some automakers signal a turn away from hybrids for the future of their business. The scorecard, published yesterday by the American Council for an Energy-Efficient Economy (ACEEE), found that of the 12 cars that produced the least greenhouse gas emissions, nine of them were hybrids, compared to three all-electric models. Hybrids also constituted four of the top five vehicles on the list.

TESLA CLEARS ROAD FOR RIVIAN, OTHERS TO SELL EVS WITHOUT DEALERS

Tesla Inc.’s legal victory to sell its electric vehicles in Michigan without dealers could clear a path for other carmakers to follow. As long as it complies with a few unrestrictive legal technicalities, the electric-car maker is free to deliver Model 3, S and X vehicles directly to customers and service them through a subsidiary, the state ruled Wednesday. While Michigan will consider other businesses’ approaches on a case-by-case basis, as long as a manufacturer doesn’t have an existing dealer network, it could follow in Tesla’s footsteps, according to Kelly Rossman-McKinney, a spokeswoman for the attorney general. That’s significant for electric-car upstarts including Rivian Automotive Inc., the truck and SUV maker that raised almost $3 billion last year from the likes of Amazon.com Inc. and Ford Motor Co. The Plymouth, Michigan-based company plans to start selling its R1T pickup and R1S utility vehicle late this year is waging the same costly legal battles state-by-state that Tesla faced in its early days. “Having settled on these terms with Tesla, it would seem legally very difficult for the state to deny a similar arrangement to any other company situated like Tesla,” Daniel Crane, a University of Michigan law professor who specializes in antitrust and regulatory issues, wrote in a blog post after the settlement was announced.

Rivian declined to comment. Other new entrants planning to sell cars directly to consumers include Lucid Motors, which has said it aims to start production of its Air sedan late this year, and Byton Ltd., which is targeting 2021 for the launch of its M-Byte utility.

Michigan dealers could still challenge the settlement. “Since we were not a party to the suit, we knew nothing of the settlement and were not consulted,” Terry Burns, executive vice president of the Michigan Automobile Dealers Association, told Automotive News in an emailed statement. “We are currently reviewing the order as compared to the current statute.”

Tesla secured a victory in Michigan after filing a federal lawsuit against the state in 2016 challenging its ban on direct-to-consumer car sales. The attorney general’s office insists the accord doesn’t jeopardize existing state franchise laws, which prevent manufacturers from opening stores that would compete with dealers. Michigan ruled that sale contracts Tesla signs with Michigan consumers will have to indicate that the transaction took place elsewhere. But customers won’t actually have to leave the state to complete the contracts, so the stipulation amounts to a paperwork requirement.

The decision isn’t a slam dunk for Tesla because Michigan’s ruling fell short of setting a national precedent, according to Patrick Anderson, principal of an eponymous consulting firm that has assisted dealers in other state battles over franchise laws.

Existing Tesla owners in the state, who until now have had to travel to Ohio and other states to have their cars repaired, are poised to benefit from the ruling. Robert Vogt, an automotive engineer living in Ann Arbor, said Tesla used to pick up his Model S and haul it more than 50 miles away to work on his car in Toledo and would drop off a loaner car for him. But that stopped last summer when Model 3 deliveries surged and started taxing the company’s mobile-service support network. “I have a service light on mine that just popped up, and I’m trying to figure out how to get that dealt with because I’m not going to Toledo,” Vogt said. “If they had a service place in Ann Arbor, that would be totally fine; I would be happy to take it there.”

FERRARI IS THE STRONGEST BRAND IN THE WORLD, SAYS BRAND FINANCE

Ferrari is the strongest brand in the world for the second year in a row, according to independent brand value consultancy Brand Finance. Presenting its Brand Finance Global 500 report for 2020 at the World Economic Forum at Davos this week, the consultancy gave the Italian sports car specialist a Brand Strength Index score of 94.1 out of 100, with Ferrari topping the rankings as one of only 12 brands that were awarded the highest AAA+ rating.

To calculate the relative strength of a brand, Brand Finance uses various metrics that evaluate aspects such as business performance, stakeholder equity, and marketing investment.

Ferrari was also commended for announcing five new models during 2019, including the Roma touring coupe and the hard-core SF90 Stradale, both of which are aimed at widening the marque’s customer base.

When it comes to overall value, however, Ferrari only ranks in 206th position among the world’s 500 most valuable brands in 2020, with its brand value of US $9.1 billion, which is around R130bn at today's exchange rate.

No car company made it into the top 10 Most Valuable Brands, although Mercedes-Benz made 11th spot with a brand value of $65 billion (R932bn). The German carmaker is followed by Toyota in 15th at $58bn and Volkswagen in 25th, at a value of $44.8bn.

Ford Motor Co. has proposed a $30 million settlement in a class-action lawsuit regarding faulty transmissions Focus and Fiesta vehicles it no longer sells in the U.S. Multiple lawsuits, including a class-action suit that began in April 2017, have been filed on behalf of car owners unhappy with the transmissions, known internally as the DPS6. Dual-clutch gearboxes like the DPS6 typically shift rougher than other automatic gearboxes to which North American drivers are accustomed. The Ford transmissions also needed frequent repairs for quality issues the developed over time with the clutch and clutch seals, among other things.

CAR DEALERS, OEMS AND AUTO JOURNALISTS AGREE ON ONE THING

A Cox Automotive poll asked automakers, dealers, and auto journalists what they think will rank as big industry issues/challenges/disruptors. All three surveyed groups cited affordability as No.1. Their No. 2 and 3 responses varied, but they agreed the top concern is the rising cost of vehicles. Right now, the average transaction price is about $38,000. The fret: That much money for a depreciating asset could price many people out of the market or send them to the used-car lot for a cheaper deal.

Nissan Motor Co. will scale back its U.S. sales operations, shuttering two regional offices and offering buyouts to some of its staff as the Japanese carmaker seeks to regain its footing after a year of management turmoil and weaker demand in key markets. The manufacturer will streamline it's Northwest and Mountain states regional sales offices to six other locations by July 1 but didn’t say how many staff would be impacted by the change or when those sites would cease to operate.

Cutting sedans from the lineup could put automakers at risk of losing “sedan loyalists,” but the pre-owned market is one potential way to keep those buyers in the fold. Among a deep set of data in the second annual CarGurus Sedan Survey was this nugget: Almost a third (32%) of current sedan owners who want to purchase another new sedan say they would consider purchasing a new vehicle in a different body style from the same brand, should that automaker discontinue sedan production. However, CarGurus said in the report, 67% would consider shopping the competition for a new sedan, instead.

A joint venture between French energy major Total (TOTF.PA) and automaker Peugeot (PEUP.PA) will aim to produce batteries for 1 million electric vehicles per year by 2030, Total Chief Executive officer Patrick Pouyanne said on Thursday. The project, through a joint venture of both companies known as Automotive Cell Company (ACC), is backed by the French and German governments and the European Union, as the bloc races to build a competitive battery sector to challenge Asian dominance.

Dealers say they're being forced to buy cars they don't want, but companies say profits have never been better. For buyers, it's a great time to negotiate. Fiat Chrysler dealers claim they're being forced by the automaker to buy unpopular cars they can't sell. According to multiple reports from Bloomberg, FCA has been loading up its inventory with tens of thousands of extra vehicles that the company's 2400 U.S. dealers haven't ordered. Dealers say the practice, known as a sales bank, relegates them to buy vehicles they view as less desirable and likely to move slower off their lots. For consumers, this means now may be the best time to buy a new car from any of FCA's mainstream brands.

The Bloomberg report says that FCA "disputes" the term "sales bank" as it applies to the automaker's brand-new sales analytics tool, which attempts to predict exactly how many vehicles—and the exact vehicle trims—it should build. The tool was introduced by a former Amazon executive, Mark Stewart, who became chief operating officer in 2018. According to Bloomberg, it saved FCA more than $400 million in the third quarter. Typically, large automakers like FCA keep a relatively small number of unsold vehicles that dealers have yet to purchase. But FCA, according to an unnamed source in the Bloomberg report, had an unsold sales bank of as many as 70,000 vehicles earlier this month. That may be the reason FCA is now offering employee pricing on many of its models.

However, even if FCA has in fact overproduced and has a glut of less desirable vehicles, the automaker has kept demand on track with its rivals. As of December 1, FCA had an 82-day supply of vehicles compared to Ford's 93 and GM's 73, according to Automotive News. Days' supply is an average measure of how long it takes to sell its current inventory, though higher numbers are not always indicative of a low-demand product. For example, hot-selling vehicles like the Jeep Wrangler (91 days) are in line with other high-demand vehicles like the Ford F-series (100 days). Subaru, on the other hand, runs extremely lean and had a fleet-average supply of 24 days. So does Mercedes, at 37 days.

While companies with larger inventories tend to discount their vehicles more heavily than those with smaller inventories, that doesn't mean they're going broke. FCA posted a record 11 percent margins and a $2.2 billion profit in North America during the third quarter. It's true that Jeep and Ram remain the primary reason FCA stays in good health, as Fiat, Alfa Romeo, and Chrysler sales are sinking. Dodge is flat. FCA, in merging with PSA, must readjust its lineup to survive the next decade. But as the late CEO Sergio Marchionne had planned years ago, trucks and SUVs are most certainly the company's winning strategy.