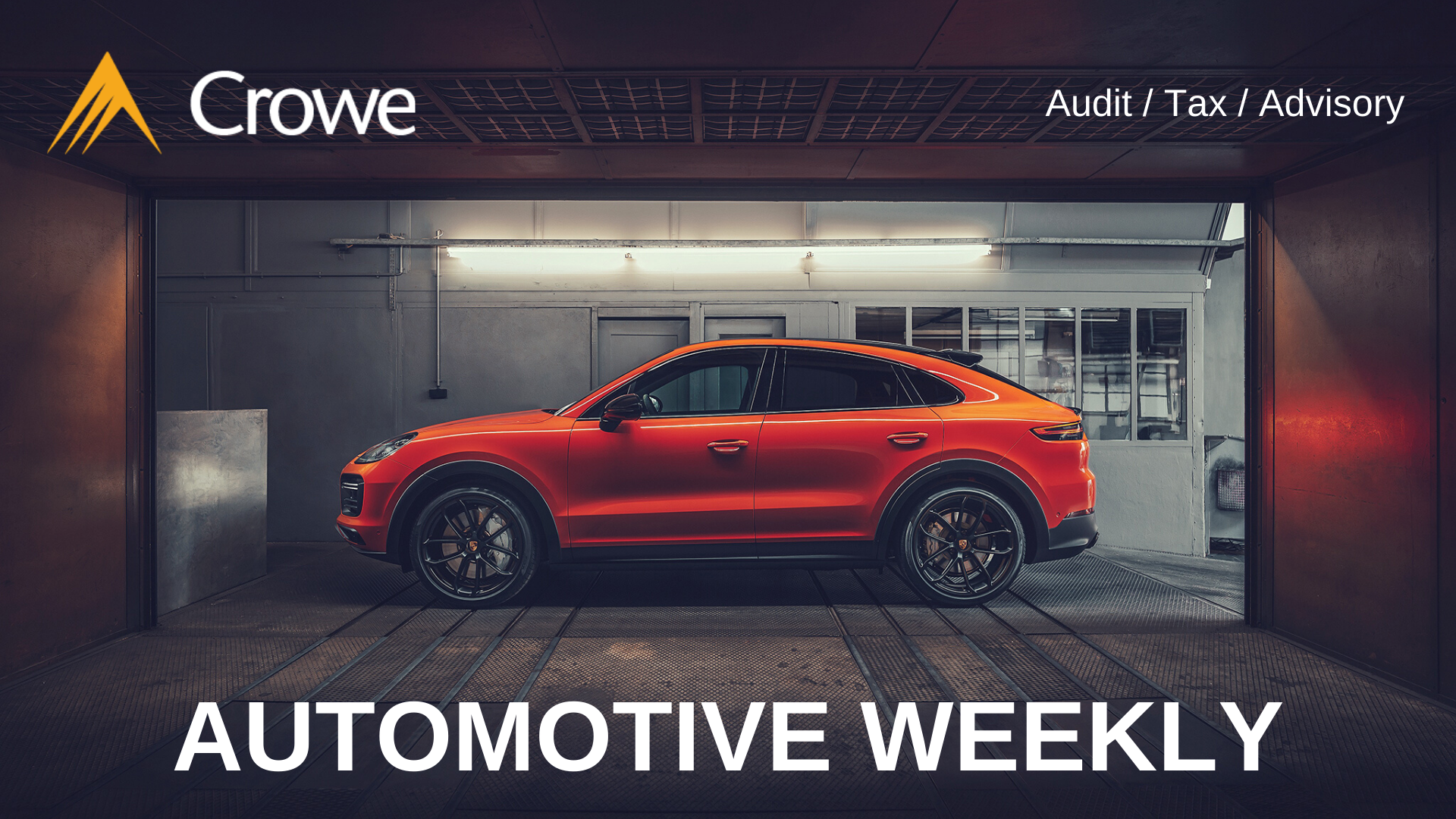 Half of General Motors’ GMC-Buick dealers have signed up to carry the GMC Hummer BEV under the terms of an agreement with the automaker. GM President Mark Reuss says the company’s aim in Hummer marketing is to provide the best possible experience for customers. The agreement with dealers allows GM to take the initial $100 reservation fee for the Hummer. “Dealers also have to agree to get the tools necessary to service the vehicles and put in charging stations,” says Reuss. “There also is going to be training.”

TESLA PLANS TO OPEN ABOUT 52 NEW SERVICE CENTERS IN 2021

Tesla Inc. plans to add at least one new service center every week in 2021, website Electrek reported on Thursday, citing a source familiar with the matter. The report doesn't specify which regions are targeted for the expansion, but the EV maker has been expanding its network of service centers and recharging network to keep up with its growing global fleet. Last week, analysts at Brokerage RBC noted that Tesla's investment in service and quality has not been enough to keep up with its increasing sales and has the potential to damage the brand. "Service could be particularly important as Tesla continues to try to expand outside its core market."

The company, which has repeatedly said that it needs to expand its service center locations, operates 466 service centers around the world, according to Electrek.

Tesla could not immediately be reached for a comment.

Manufacturers have benefited not just from very strong pricing amid a shortage of cars but also low costs as emergency brakes applied to spending in March were lifted only gradually. It isn’t entirely clear why Volkswagen is different. On calls with the media and investors, Chief Financial Officer Frank Witter called out the September completion of the company’s “monitorship” in the U.S.—a program of self-regulation imposed after the diesel scandal—as requiring extra resources. But he also admitted to analysts that others were doing better on costs. He presumably had in mind Daimler, which this month committed to cutting fixed costs by 20% relative to the 2019 level by 2025. Investors are paying attention: Daimler’s stock is down just 5% this year, compared with 24% for Volkswagen’s.

Crate engines have been wildly popular for decades with car enthusiasts, giving them a way to beef up stock vehicles. Chevrolet has a long history of offering these powerplants, but now is honoring that tradition with a modern twist: eCrates. In fact, some of those doing electric conversions are using old EV1 motors, General Motors’ long-dead first attempt at electric vehicles. However, there are several options available for those looking to get the instant torque only an electric motor can provide while keeping those vehicles on the greener side.

Toyota Motor Corp. and KDDI Corp. said on Friday that Japan's biggest automaker would invest 52.2 billion yen ($500 million) in the mobile carrier to deepen their partnership in the age of the "connected car." After decades of focusing on making and selling cars, Toyota is increasingly turning to partners to help develop expensive new vehicle technologies as it tries to transform itself into a mobility services company.

Under their new business alliance, Toyota and KDDI said they would jointly conduct R&D focused on telecommunication platforms that connect cars, homes, towns and users, among other projects. To cement their ties, Toyota will buy 18.3 million treasury shares from KDDI, boosting its stake to 13.74 percent from 12.95 percent, on Jan. 29, they said in the statement.

This year, Toyota agreed with KDDI rival Nippon Telegraph and Telephone Corp. to work together on developing smart cities, with a 200 billion yen investment in each other.

Ford does not expect to chase sales of electric vehicles selling for $100,000 or more, according to Jim Farley, the automaker’s new CEO. Instead, Farley says Ford’s strategy for electrification is built around commercial vehicles, including a soon-to-be unveiled version of the Transit van. The automaker also will broaden its push to reduce soaring warranty costs that have hobbled its earnings and stock price. “Our warranty coverages in the last few years is up $1 billion to $2 billion depending on the year, and that is not okay,” Farley says.

Fiat Chrysler Automobiles NV disclosed it could face costs of up to 722 million euros ($840 million) to resolve a Justice Department investigation into excess diesel emissions and as a result of higher fuel economy penalties. The Italian-American company said the impact of a U.S. appeals court ruling in August overturning the Trump administration’s July 2019 rule that suspended a National Highway Traffic Safety Administration (NHTSA) regulation more than doubling penalties for automakers failing to meet fuel efficiency requirements could be significant.

Ford Motor Co. does not intend to build all-electric Super Duty pickup trucks, a top Ford executive told industry analysts Monday. The bestselling Ford F-Series, which refers to the F-150 and its Super Duty siblings, is a lucrative revenue stream for the company, reaching $42 billion in 2019. For perspective, in that one year the Ford F-Series generated more revenue than the NFL, MLB, NBA and NHL combined — which was just $40 billion. A light-duty pickup has a gross vehicle weight of 8,500 pounds or less while a so-called heavy-duty truck — a series referred to as Super Duty in the Ford lineup — exceeds 8,500 pounds.

Mitsubishi Motors Corp. reported an operating loss that was wider than estimates as the Japanese automaker struggles to sell cars amid the coronavirus outbreak. The loss for the quarter ended September was 29 billion yen ($276.5 million), compared with analysts’ average projection for a loss of 27 billion yen. Even so, Mitsubishi Motors stuck to its forecast for an operating loss of 140 billion yen on sales of 1.48 trillion yen for the fiscal year through March. Mitsubishi Motors’ struggles are putting a strain on its alliance with Nissan Motor Co. and Renault SA, which has been in turmoil since the November 2018 arrest of former Chairman Carlos Ghosn.

VOTERS OVERWHELMINGLY BACK ‘RIGHT TO REPAIR’

Massachusetts voters overwhelmingly approved a ballot question Tuesday expanding the state’s “Right to Repair” law, a decision with potentially far-reaching ramifications in the automotive industry about who has access to the highly proprietary data being transmitted by cars. Under the newly approved Right to Repair law — which drew at least $43 million in spending, the most for a ballot question in state history — automakers will be required to provide car owners and independent mechanics with access to wireless mechanical data, known as telematics, starting with model year 2022 cars.

SERVICE, PARTS BUSINESS IS ON THE REBOUND

Parts and service business is slowly recovering but lags behind the recovery in new-vehicle sales – especially in collision repair, probably because people are driving less and getting in fewer crashes, according to some of the nation’s biggest new-vehicle dealers. “We are seeing customers return,” says Bryan DeBoer, CEO of Lithia Motors in Medford, OR. He says in a conference call on third-quarter earnings Lithia’s service, body and parts business is up 2% in September from a year ago.

The number of franchised dealer reviews over four stars has grown as a percentage of all reviews. According to a study from auto industry online reputation services company Friendemic, the number of positive reviews grew from January 2017 through August 2019. Negative reviews have dropped below 13% of total reviews. In a blog post titled, “Do Consumers Really Dislike the Dealership Experience?”  Friendemic posted the study’s findings, with chief growth officer Denise Chudy saying dealers are using feedback from reviews to improve their customer interactions.

Massachusetts voters on Tuesday approved an expansion of the state's 2012 "right to repair" law, and that could put makers of electric cars in an awkward position. The law is meant to ensure that individual owners and independent repair shops have the same access to parts, tools, and software as franchised dealerships. The new expansion of the law focuses on something integral to many electric cars—data. Under the revised law, automakers will have until the 2022 model year to adopt standardized open data platforms, explained The Verge. That would let owners and independent repair shops access  telematics data that automakers tightly control.

This could become a thorny issue as automakers increasingly follow the example of Tesla and enable over-the-air (OTA) software updates, which allow for easy addition of new features and correction of bugs, but also gives automakers more control over how cars are used. This is a contentious issue for Tesla owners. Tesla all but stopped supporting the Roadster in recent years but balked at providing any information on how to repair them—although earlier this year, after a critical mass of protest from high-profile owners, it finally started a program to support them. The service experience for owners of used Teslas has led to some independent shops that have essentially had to reverse-engineer the vehicles so that they can service some items. But Tesla can limit access to parts, or block Supercharger DC fast-charging access on repaired cars. Tesla has remote access to an unprecedented level of data, including on owners' driving behavior, which the automaker has used to defend itself in the wake of crashes allegedly involving its Autopilot driver-assist tech. Ahead of the Model Y launch, Tesla eliminated annual service for its models but made an effort to improve the in-house experience.

For companies like Ford and General Motors that are just starting to switch over to OTA updates, this could be cause to revisit some of the assumptions they've built into their vehicles and the data that's considered proprietary.