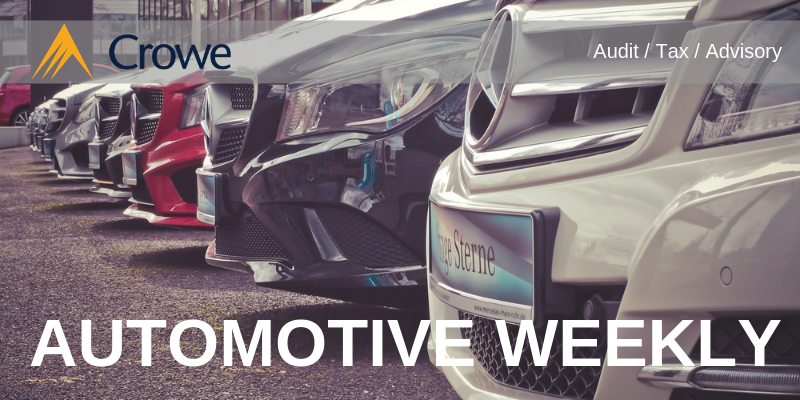 Ford Motor Co. is curbing production of its F-150 pickup truck—the company’s biggest moneymaker—due to a shortage of semiconductors, as the global supply constraints for computer chips permeates deeper into the car business. Ford said Thursday it will cut F-150 production at a Detroit-area factory next week to just one eight-hour shift, from three shifts. Its other F-150 plant, in Kansas City, Mo., will run two of its three shifts next week, with both factories returning to their normal round-the-clock schedules on Feb. 15.

Stellantis will idle its minivan plant in Ontario for three weeks, the automaker said late Thursday without offering more details. Unifor Local 444, which represents hourly workers at the plant, said in a Facebook post that Windsor Assembly Plant will be down for three weeks starting Feb. 8 “due to the semiconductor shortage [the technology used to make microchips].” Stellantis becomes the latest automaker to cut output due to the growing global microchip shortage.

U.S. automakers are expanding production cuts at some North American plants as they cope with a worsening global shortage of semiconductors. Chips for use in cars and trucks have been harder to come by as semiconductor makers have allocated more capacity to consumer products. The pandemic has caused a surge in orders for smartphones, TVs and computers as people try to make extended life at home more bearable, leaving less capacity for a stronger-than-expected rebound in vehicle demand. Consultant AlixPartners said the global chip shortage could cost automakers $61 billion in lost sales this year.

Japanese automakers Toyota, Nissan and Honda report third quarter results this week buoyed by recovering demand in China and the United States, but a global chip shortage has clouded their earnings outlook. A surge in demand for electronics as more people stay home due to the coronavirus pandemic has led to shortages of semi-conductors, forcing the carmakers to cut production just at a time when sales have recovered more quickly than expected. Compatriots Subaru Corp and Mazda Motor Corp have cut production as well, as have other automakers including Volkswagen AG.

General Motors Co said on Tuesday it was extending production cuts at three North American plants until at least mid-March due to the global semiconductor chip shortage, while vehicles at two other factories would only be partially built. GM, whose shares dipped 1.6% after the announcement, did not disclose the impact volumes or say which supplier and vehicle parts were affected by the chip shortage.

Ford is embracing digital technology, and talking about it loudly, in an effort to catch up with both Tesla and General Motors. The new approach is boosting the stock,but rising expectations don’t come for free. The big news in Ford’s fourth-quarter results, reported after the bell Thursday, was a massive acceleration in technology investments. Just over four months into the job, Chief Executive Officer Jim Farley pledged $22 billion through 2025 to electric vehicles and the digital technology involved in connecting them to the internet, as well as $7 billion to autonomous driving. This was after the company on Monday inked a far-reaching partnership with Google also centered on “connected” vehicles and the reams of data they will produce.

U.S. auto dealers selling Chrysler, Dodge, Fiat and other brands under the recently formed auto-making giant Stellantis NV have a message for the new leadership: Help us fix the ailing parts of the lineup or consider cutting back. The question of how to revive Fiat Chrysler’s weaker brands has lingered for years, and it now falls to Stellantis Chief Executive Carlos Tavares to answer it. Mr. Tavares has said he doesn’t plan to cut any brands, and a Stellantis spokesman added that the company values its diverse lineup of brands, ranging from off-roaders at Jeep to family-haulers at Chrysler.

Although true flywheel-based kinetic energy recovery systems (KERS) never quite caught on in racing or in production hybrids, a company in Israel has been working on putting the technology to use where it could make a big difference: EV fast-charging stations.

The flywheels Chakratec uses for charging stations weigh about 330 pounds each and they’re housed in canisters where they’re suspended in a vacuum. The great mass of one canister unit allows two shorter-range EVs to be fast-charged to 80% simultaneously as the flywheel “spins down,” after which the unit requires about 45 minutes to get back up to its ideal/top speed. The mass "spins up" via a small electric motor, that doubles as a generator in the other direction.

With flywheel technology—which the company terms a kinetic battery—Chakratec allows the deployment of fast-charging stations anywhere. It doesn’t require big batteries because the energy storage is all accomplished mechanically.

The company says the solution is a greener one. It will last 20 years and enable roughly 200,000 charge and discharge cycles. That's far better than today’s assumed cycle life for batteries, which the company says can last as little as 2-3 years in busy locations, and likely a beneficial choice versus rotating in second-life EV batteries. Likewise, flywheels can be located in some places where batteries wouldn’t be advisable, like inside or underground.

Chakratec claims that it currently has Škoda, Blink, and Enel X as clients and units in use in Germany and the Czech Republic. On Tuesday, it announced the deployment of one of its units at a German hotel.

Both Jaguar and Volvo have been among many automakers testing flywheel technology prior to their current battery-electric push. In 2010, Porsche showed a 911 hybrid test car that could store energy in a flywheel—an adapted version of the original (and never fully implemented) idea for a Kinetic Energy Recovery System (KERS) built into Formula 1 race cars.

Why did flywheel tech never catch on in vehicles? Primarily, the duration of boost from a car-sized flywheel system was quite short. In some cases, the physics resulted in imbalances in the vehicle. But with much heavier flywheels, deployed securely in a charging station, this company appears to have a great use for the technology.

California is the trend-setter for green vehicles in the U.S. in many respects. It’s also far and wide the nation’s largest market for electric vehicles—and for plug-in hybrids.

Despite the state’s efforts, PHEVs haven’t been gaining market ground in recent years. According to the quarterly report from the California New Car Dealers Association released last week, PHEVs fell from 3.0% of the state’s new vehicle market to just 1.9% in 2020.

The sharp change in trajectory of PHEVs started in 2018 and continued throughout 2019. It’s likely no coincidence that 2018 was the first year the Tesla Model 3 was widely available, and 2019 brought first deliveries of the Hyundai Kona Electric and Kia Soul EV.

It makes sense. Those who have access to home charging have discovered that newer long-range EVs plus the occasional use of growing DC fast-charging networks will cover their road-trip needs.

In December 2019, California dropped the Clean Vehicle Rebate amount for plug-in hybrids from $1.500 to $1,000 and started exclusive vehicles costing more than $60,000. There were already household income thresholds for allowing the incentive in place since 2015, but that arguably chipped away at many of the German luxury brands’ PHEVs while encouraging vehicles like the Tesla Model 3 and Model Y.

California added a new $1,500 point-of-sale rebate on EVs and plug-in hybrids, offered in partnership with state utilities, that went into effect in November.

As summed by the California trade group Veloz, about 45% of cumulative national zero-emission vehicle (EVs, PHEVs, and fuel-cell vehicles) have been sold in California.

The state last year registered the lowest annual new-vehicle sales in the state since 2011, but it was nowhere near as low as the economic bottom of 2009 and 2010.

The Toyota RAV4 was less than 2,000 sales away from overtaking the Honda Civic as the longline best-selling nameplate in the state. No doubt aided by the 40-mpg RAV4 Hybrid and to some degree by the RAV4 Prime plug-in hybrid, the RAV4 adds up to nearly one out of every four compact SUVs sold in the state.

Toyota and Honda—both brands with very limited plug-in offerings and no EVs whatsoever available in California—collectively accounted for nearly 29% of new-vehicle sales in the state in 2020. Volvo, Tesla, GMC, and Chrysler gained the most on a brand basis in the state.