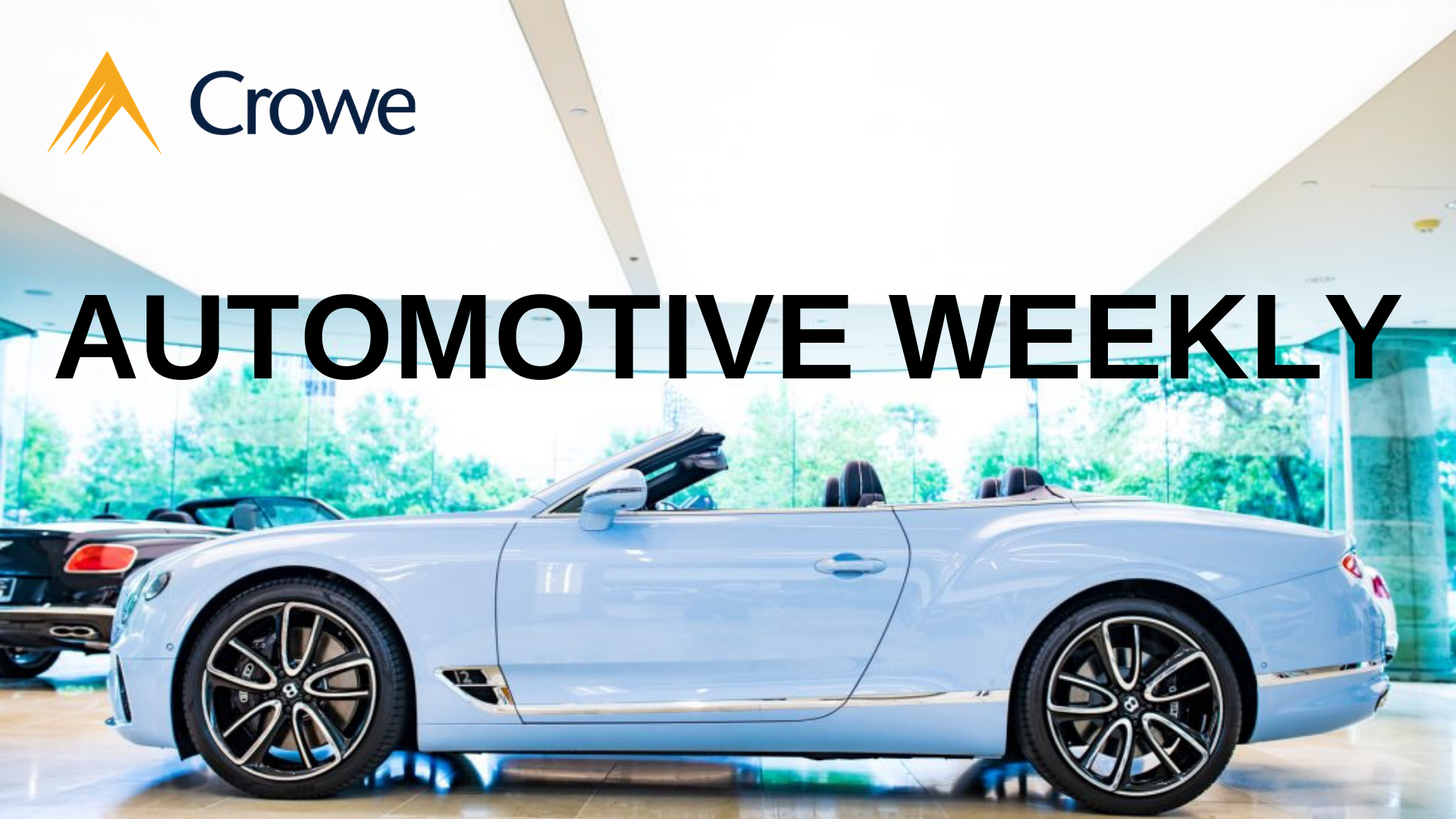 West Coast Democrats this week introduced federal legislation that would ban U.S. sales of new vehicles with internal combustion engines by 2035, despite electric vehicles accounting for less than 5% of sales last year. The proposal is hailed as a measure to reduce pollution and protect U.S. manufacturing. It runs counter to the Trump administration's work in rolling back Obama-era fuel economy standards that the overall industry hasn't met since 2015. Meanwhile, consumers are buying up trucks and SUVs with gas prices sitting closer to $2 than $4.

Automakers are investing billions of dollars to bring new electric vehicles to consumers in the U.S. and other global markets, but their success hinges on securing the most critical and expensive component: the battery. A handful of companies based in China, Japan and South Korea make automotive-grade battery cells, which has upset the traditional dynamic between automakers and suppliers. These battery giants -- though little known to the general public and relatively new to the auto industry’s sprawling supply chain -- are key to manufacturers’ goals of bringing dozens of new EV models to U.S. showrooms by 2025. “There are not enough batteries to fulfill the automakers’ near-term promises,” said Sam Jaffe, managing director of Cairn ERA, an energy-storage consulting firm in Boulder, Colo. “A lot of new battery factories are being built. But there is a battery-supply problem in the near term. All of the incumbent automakers are scrambling at this point.”

Strained logistics, production delays and battles over intellectual property have heightened tensions between automakers and this new breed of supplier, which wields far greater leverage than suppliers of camshafts, mufflers and pistons. The auto industry’s sudden embrace of EVs also may result in more incidents like recent recalls of four different models for battery-fire risks.

Ford Motor Co., one of the companies doing a recall, now has to team up with other automakers to meet European emissions regulations to avoid the prospect of fines.

Shortages loom as an even larger problem, albeit one that may only be short-term as battery manufacturers ramp up output. Volkswagen Group unit Audi had to pause production in February of its e-Tron, and Jaguar Land Rover that same month reportedly suspended output of the I-Pace due to bottlenecks with battery supplier LG Chem. Ford and VW have warned that a U.S. legal dispute between LG Chem and fellow South Korean producer SK Innovation Co. over trade secrets could lead to a “catastrophic supply disruption.” The U.S. International Trade Commission is expected to issue a closely watched ruling on that dispute Oct. 26.

Suppliers of batteries are wary of over-committing to any one automaker and eager to recoup the billions of dollars they have spent on production lines around the globe. Many are hedging their bets by crafting agreements with more than one partner. This small club includes the two South Korean rivals, Contemporary Amperex Technology Co. of China and Japan’s Panasonic Corp. “Battery suppliers can be very picky with their OEMs,” said Nathalie Capati, a former battery engineer at General Motors and Apple Inc. who now runs the Battery Lab, a consulting firm in San Francisco. “There are only a few cell suppliers who can meet their quality and volume. The automakers are at the mercy of cell suppliers these days.”

Panasonic has long been joined at the hip with Tesla Inc.: The two companies operate the massive battery plant known as the Gigafactory outside of Reno, Nev. CEO Elon Musk has complained the Japanese company operates at a pace that constrains output of Tesla’s Model 3 sedan. Panasonic is adding a 14th battery-cell production line at the Nevada factory, a move that will increase output by 10 percent. But it’s not beholden to Tesla: It also has a joint venture with Toyota Motor Corp.

“Today’s batteries can’t scale fast enough,” Musk said last month at Tesla’s Battery Day event outlining the company’s technology plans. “There’s a clear path to success but a ton of work to do.” Tesla also sources batteries from CATL and LG Chem. But the Palo Alto, Calif.-based automaker has an insatiable need for batteries and Musk is eager to wean the company of its dependence on outside suppliers. Tesla plans to make its own cells on a pilot line near its auto plant in Fremont, Calif., and at a new factory it is building in Austin, Texas.

The EV push has taken on new urgency amid the dire climate crisis. European cities like Madrid and Paris and the Canadian province of British Columbia are among the jurisdictions phasing out the internal-combustion engine. And California, which has been choked with smoke from devastating wildfires, announced last month that it will ban the sale of new gasoline-powered cars in 2035.

By 2022, more than 500 different electric models will be available globally, according to an EV forecast from BNEF, which estimates that over half of all passenger vehicles sold will be electric by 2040.

A report issued last December by the Institute for Defense Analyses, a nonprofit that examines national-security issues, said battery manufacturers have taken on “outsized importance” in the auto industry and warned the U.S. hasn’t coordinated domestic supplies on the scale that Europe has, which would be a disadvantage if there are major bottlenecks or interruptions in parts of the supply chain. Those sentiments were echoed recently by Mary Nichols, chair of the California Air Resources Board, during an event last month announcing the state’s plan to ban gasoline-powered cars. “A new arms race has begun,” she said. “It’s an electric race to get to cheaper and more powerful batteries, and it’s one that manufacturers around the world are competing in.”

South Korea's Hyundai Motor Co said on Monday it swung to a net loss for July-September, missing market estimates by a wide margin, as costs related to engine quality issues and recalls smashed what would otherwise have been strong earnings. Hyundai, the world's fifth-biggest automaker when combined with affiliate Kia Motors Corp, reported a net loss of 336 billion won (228 million pounds). The average of 12 analyst estimates compiled by Refinitiv was 1.2 trillion won in profit. The automaker said it booked 2.1 trillion won to cover charges related to engine defects that increased the risk of stalling and fire.

Fiat Chrysler Automobiles and PSA Group are set to win European Union approval for their $38 billion merger to create the world's No. 4 automaker, people close to the matter said. Following feedback from rivals and customers, the automakers only had to tweak the wording of their concessions to EU antitrust regulators, with no changes in the substance, the people said. The companies did not have to use the COVID-19 pandemic to argue for the merger, they added.

To allay concerns that a combined PSA and FCA would have a dominant market share in commercial van sales in Europe, PSA has offered to increase production capacity for Toyota at their Sevelnord van joint venture in France. The plant builds Peugeot Expert and Citroen Jumpy vans, as well as the Toyota ProAce.

PSA and FCA will also allow their dealers in certain cities to repair rival brands.

The European Commission's approval would formalize the creation of Stellantis, a carmaking group that could tap hefty profits from selling Ram pickup trucks and Jeep SUVs to U.S. drivers to fund the expensive development of zero-emission vehicles for sale in Europe and China.

Despite the buzz online car buying has garnered of late, the vast majority of consumers will still prefer to purchase a vehicle at a local dealership, says Langley Steinert, founder and CEO of CarGurus, an online automotive marketplace. Digital auto retailing gained traction last spring when COVID-19 kicked in and government mandates temporarily suspended in-dealership vehicle purchases in many states. Consumer interest in online car buying jumped from 19% in April to 39% in June, according to a CarGurus survey Steinert cites. He predicts 20% of auto consumers will want to buy a vehicle online. The rest “will want to buy locally.”

Aston Martin's 125 million pound ($163 million) capital increase has been fully subscribed, the loss-making carmaker said on Wednesday as it seeks to turn round the business with additional support from Daimler. Shares in the company jumped as much as 12.8% after it said late on Tuesday that Daimler's Mercedes-Benz would lift its stake in the British carmaker to up to 20% by 2023. Mercedes will not put up any cash but will be given the shares in exchange for expanding an existing supply agreement, allowing Aston Martin to access key Mercedes technology, including hybrid and electric drive systems.

Toyota Motor Corp.’s global sales rose 2% in September from a year earlier, signaling car demand is starting to recover despite the continued spread of the coronavirus in many major markets. Worldwide sales rose to 837,049 units in September, the first month of year-on-year growth in nine months, the Japanese automaker said in an emailed statement Thursday. Sales jumped 16% in the U.S., bolstered by demand for RAV4 and Lexus models, and 25% in China, where the recent auto show in Beijing helped draw people into exhibition rooms.

GOING UP: THE VALUE OF THAT BIG, USED PICKUP IN THE DRIVEWAY

Used large pickup trucks are appreciating amazingly in value, according to auto industry experts. That’s good news if you’ve got one to sell or trade in, but less good, if you want to buy one. “The pickup truck has been the success story, I like to say, of this pandemic,” said Tom Kontos, chief economist for wholesale auto auction firm KAR Global. Kontos said in a report earlier this month that compared with pre-pandemic prices, the average wholesale price of a used, full-sized pickup had increased more than $5,000, or more than 30%. That is, an average wholesale price of $21,551 in August, vs. $16,385 in February, Kontos said. The increase vs. August 2019 was about $4,500, or more than 25%.

The coronavirus pandemic hasn't changed Americans feelings about electric cars, but car shoppers do expect more from EVs, according to a new J.D. Power survey. A lung-related pandemic throws the need for reduced emissions into stark relief, but Americans' views of electric cars remain about the same as they were at this time last year.

The J.D. Power 2020 Q3 Mobility Confidence Index Study measures opinions of survey respondents on a 100-point scale. It found that feelings about electric cars were roughly neutral, at 54 points on the scale, down from 55 points in Q3 2019. J.D. Power did note rising expectations for driving range and charging times, however. More than three-fourths (78%) of respondents said they expected a range of 300 miles or more, up three percentage points from Q3 2019. The percentage of U.S. respondents willing to wait only 15 minutes or less for charge recovering 200 miles of range also increased to 45%, from 41% in Q3 2019, according to J.D. Power. Only 13% of respondents said they expected to buy an electric car at some point between now and 2022, while 30% said they had no intention to ever consider buying one, Kristin Kolodge, executive director of driver interaction and human-machine interface research at J.D. Power, said in a statement.

While the Q3 2020 survey and its 2019 counterpart share a somewhat pessimistic tone, a wider range of surveys have also suggested that charging availability is a problem. In a 2019 Volvo/Harris poll, 61% of respondents cited lack of charging infrastructure as the most significant factor holding back their purchase of an electric car.

There may be more room for optimism on range, however. In a survey published earlier this year, AAA concluded that owning an EV will cure range anxiety and other concerns. The big battery packs needed to get headline-grabbing range figures also aren't the greenest way to go electric—and may not even be necessary for many car buyers.