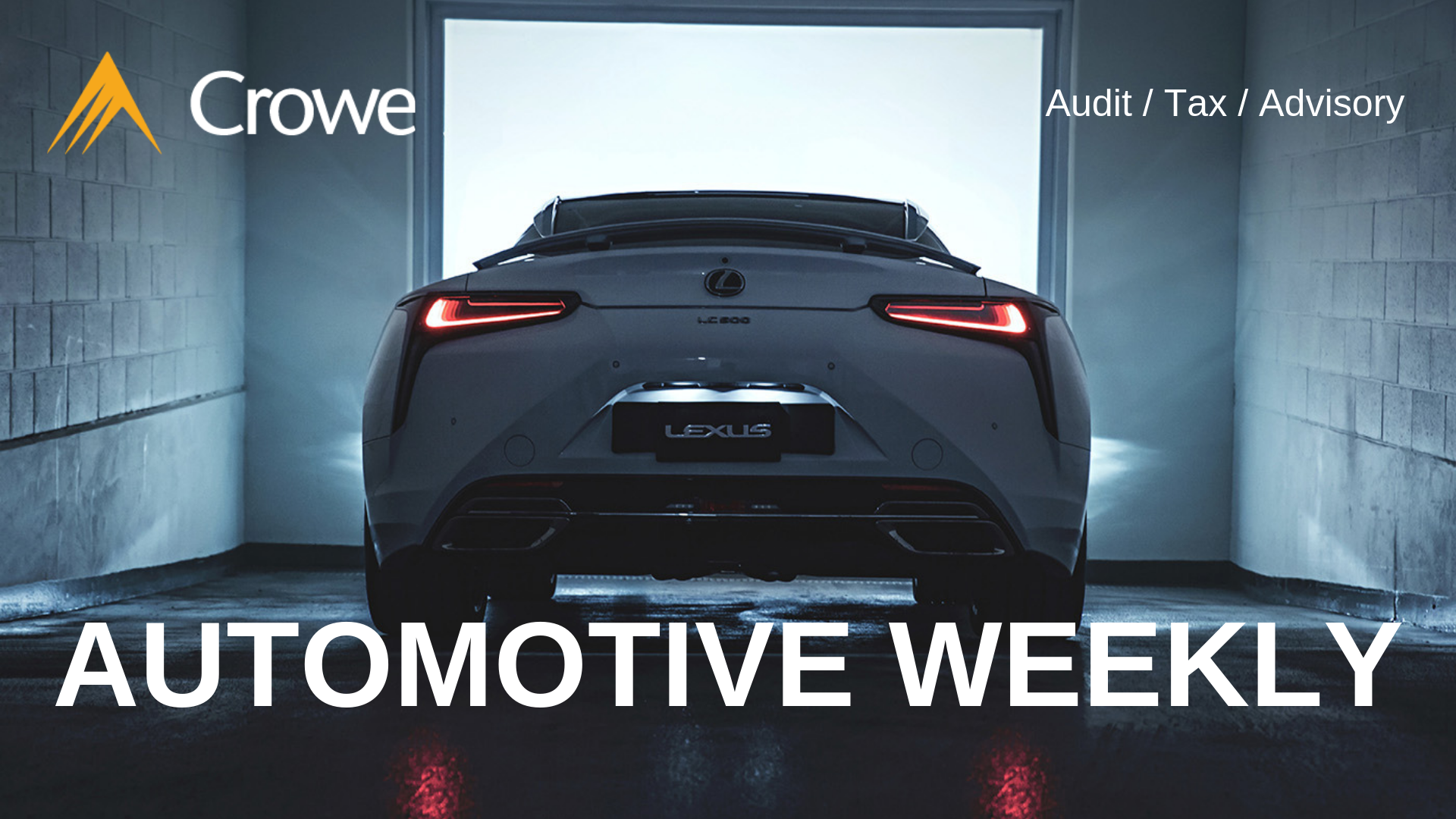 Abandoned factories, forgotten shopping malls, and undeveloped parcels of land have become parking lots full of new cars as dealers try to figure out what to do with mounting inventories of unsold vehicles. As of April 1, dealerships in the U.S. had 4.2 million unsold new cars waiting to find buyers, Automotive News reported Tuesday. Although the excess inventory situation isn't as dire as when the economy crashed a decade ago, it's only 114,000 fewer vehicles fewer than the modern-day inventory record set in May 2004. However, should a downturn hit the auto industry, dealers may find themselves overstocked.

The loans dealers take out to finance their inventories could put the squeeze on new-car dealers. For around eight years, interest rates remained low, which allowed dealers to carry vast inventories with little cost. With interest rates on the continuous rise, the same dealers stuffed to the max with more cars, trucks, crossovers, and SUVs, rates have eroded profits despite some incentives from automakers themselves. Add in extra costs to store vehicles at off-site locations, and the situation becomes worse.

To put the problem into a greater perspective, floorplan rates have risen from a low of 1.5 percent to more than 5 percent now. The problem is worse since the market continues to prefer pricier pickup trucks and SUVs, which cost more to hold in inventory for dealers. The more expensive the vehicle is, the more it costs the dealer to keep it in inventory. One dealership group reported its floorplan expenses jumped 55 percent from $6.6 million in the first quarter of 2018 to $10.2 million in 2019.

Although new-car demand remains steady, the first quarter of 2019 showed the boom days are likely over for this cycle. The auto industry experienced incredible gains during the last decade, but sales dropped 3.2 percent in the first quarter of this year. Per the report, 2019 will likely be the first year since 2014 that sales figures fall under 17 million new cars sold.

Some dealers say part of the problem is the automakers themselves, which continue to push dealers to take more cars. One anonymous dealership accused Fiat Chrysler Automobiles of promising but not delivering incentives to stock certain slow-selling models.

AutoCanada, the country’s largest publicly traded dealership group, posted a $4.1-million net loss in the first quarter of 2019, due in large part to rising operating costs in the United States, the company said. During the same quarter of 2018, the company posted a net income of $4.8 million. About a year ago, AutoCanada bought nine of the 10 stores in the Grossinger Auto Group of Chicago, establishing its presence in the lucrative U.S. auto retail market. Total first-quarter revenue in 2019 was up 19.2 percent to $739.4 million, and gross profit was up 16.1 percent to $126.7 million. Operating expenses were $122.8 million, up 28.2 percent or $27.0 million from the same period last year. “A large contributor to the increase was the addition of the U.S. Operations as operating expenses in the U.S. Operations amounted to $21.0 million in the current period,” the company said in a statement.

Operating expenses in the United States exceeded gross profit by $7.2 million. In addition, the Canadian operating expenses include approximately $1.3 million of management transition costs. "We have designed a go forward plan for our U.S. operations focusing on reducing the operating expenses in our U.S. dealerships and optimizing our U.S. portfolio with a view to creating a sustainable platform in the U.S,” Executive Chair Paul Anthony said in a statement.

The retailer had 66 franchised dealerships, comprised of 27 brands, in eight provinces in Canada as well as the group in Illinois at the end of the first quarter. Total new-vehicle sales, which included 1,511 U.S. retail sales, were 8,002, up 20.1 percent. Used-vehicle sales stood at 5,650, up 24.8 percent compared with the same quarter last year, and included 889 in the United States.

When it comes to sales, the industry is coming off several record-setting or near-record years in terms of sales. “The sale of new vehicles is beginning to trend downwards,” AutoCanada warned. “Over the last few months, there has been greater concern over the strength of the economy in both Canada and the United States. If these concerns materialize, the volume of vehicle sales could decrease more than analysts expect.”

Still, the company said it expects to grow its business “by making accretive acquisitions as opportunities may arise.”

After nearly two years of weakening profits per new vehicle, AutoNation Inc. reversed its streak last quarter by holding price and forfeiting volume. The nation's largest new-vehicle retailer is experimenting with one approach to manage the new-vehicle profit squeeze that has been bedeviling dealers. As price competition intensifies, and automakers shift more of the profit opportunity to special target-based incentive programs, retailers have grappled with how to strike the price-to-volume balance. Dealerships operating profit has dwindled, with some dealers claiming that it's almost impossible to make money on new vehicles.

Shelby, purveyor of all things fast Ford, is sending yet another car off to rental fleets. This time, it’s with Sixt instead of Hertz, but it’s still a Mustang. Starting this summer, you’ll be able to get a 600-hp supercharged 5.0-liter V8 Mustang with a slick orange and black paint scheme (Sixt’s corporate colors). We don’t have the price yet, but we’re guessing it’ll be more than the 25-buck-a-day cost for the Chevrolet Malibu.

The Shelby GT-S (no -H) Mustang is only offered with a 10-speed automatic transmission but gets upgraded Brembo front brakes, Ford Performance springs and antiroll bars, and a Borla cat-back exhaust. It also has a Shelby GT body kit and a black and orange interior. The first shipment of Shelby GT-S Mustangs will consist of 20 cars, only available in Southern California, South Florida, and Las Vegas. If you don’t get a chance to rent one -- we’re sure they’ll be hard to come by -- Sixt says it will sell the cars once they’re done with the fleet. Although, do you really want an ex-rental Mustang as your daily driver?

For reference, the Shelby GT Mustang, which comes with 700 hp, and most of the same equipment, sticker for $61,345. Contact Sixt for more information.

With China bent on dominating the future of electric vehicles, President Donald Trump is likely to erect trade barriers targeting that technology in the form of stiff new tariffs that will have staying power, according to a consultant on the country’s auto market. “I expect that President Trump will keep tariffs on electric cars as high as he possibly can,” Michael Dunne, chief executive officer of consultancy ZoZo Go, said Monday in a speech to the Automotive Press Association in Detroit. “He can see all this capacity gathering in China, and they’re bound to want to export to the U.S., so ‘let’s not make that easy.’”

Toyota Motor Corp. and Honda Motor Co. forecast profit and sales short of analysts’ estimates as a trade spat between the U.S. and China threatens global car sales already sputtering from weaker demand. Both reported results on Wednesday that underscore the challenges faced by automakers across the globe, from having to invest in electrification and self-driving cars, to struggles with tariffs on both sides of the Pacific Ocean and changing consumer tastes.

THE SCRAMBLE TO PREPARE FOR TRUMP'S NEW TAXES ON CHINESE GOODS

U.S. companies are bracing for a huge jump in costs as tariffs on $200 billion worth of consumer products and other goods from China are set to more than double on Friday per President Donald Trump’s orders. U.S. stocks tumbled for a second day after the president tweeted on Sunday that he would increase his 10 percent tariff to 25 percent after China tried to renegotiate certain elements of a proposed trade truce. After Friday, roughly half of the $505 billion that the U.S. imported from China would be subject to 25 percent tariffs. That will force American companies to either eat the added costs or be forced to pass it to their customers.

Volkswagen AG’s Audi suffered a 13% slide in April sales, adding urgency to a plan to reignite momentum due to later this month from the luxury brand’s new Chief Executive Officer Bram Schot. Monthly deliveries dropped to 140,300 cars because of a challenging market environment and a number of model changeovers, Audi said Thursday in a statement. Sales since the start of the year have declined 5.9%, likely pushing VW’s biggest profit center to fall further behind rivals Mercedes-Benz and BMW AG.

The Chinese government approved the exportation of used cars for the first time as it seeks to jump-start its new-car market. Reuters reported Monday on China's decision to begin exporting cars in an effort to drive global trade and domestic auto sales. China's auto market declined last year for the first time since the government loosened rules on private car ownership in the 1990s, according to a report.

Ten Chinese cities will be able to export used cars to global markets. The probability of them landing in the U.S., where there are numerous hurdles to import cars younger than 25 years old, is slim. Few new cars were sold in China in 1994, and their heavily depreciated values probably won't make them profitable to export. China's Ministry of Commerce will begin to approve companies to handle used-car exports and develop tests to ensure quality and safety. In its findings, China noted most developed countries export 10 percent of their used vehicles, which makes it a huge opportunity for the country to drive its local auto market.

As for where many of them will likely end up, the answer is Africa. Automakers and nations have battled for a sliver of promise on the continent as the population grows and household incomes start to rise. Numerous automakers have lobbied to make new-car imports easier, but the robust and well-protected second-hand market offers a steep hurdle. Chinese exports will likely only add to the current situation.