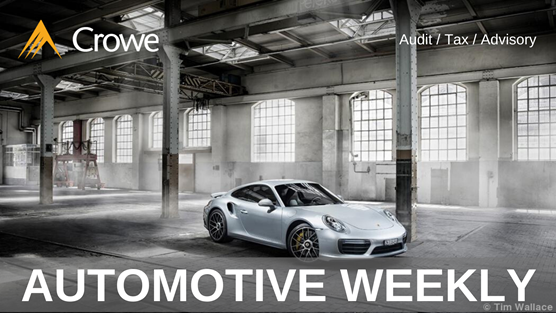 Car Dealers Positive, But Less Optimistic About Next Three Months

CAR DEALERS POSITIVE, BUT LESS OPTIMISTIC ABOUT NEXT 3 MONTHS

Franchised dealers polled by Cox Automotive this spring were a little less optimistic about the future than they were mid-winter, as overall dealer sentiment softened in part because of inflation, higher costs and still-tight inventory. Franchised dealers' expectations for their vehicle markets for the next three months fell from a score of 69 in the first quarter to a still-positive 64 in the second quarter, according to the latest Cox Automotive Dealer Sentiment Index results.

Ford topped new-vehicle registrations for electric vehicles among mainstream brands in the first four months of the year, followed closely by Kia and Hyundai. Ford's 11,751 EV registrations came mostly from the Mustang Mach-E crossover at 10,740, along with 908 E-Transit vans and 103 of the new F-150 Lightning pickup, the four-month data showed. Ford EV registrations doubled from the same period the previous year. New EV registrations for Kia came in at 11,483 in the January-April period, compared with just 1,549 in the year-earlier period.

Ferrari NV plans to significantly expand its factory in northern Italy as part of the electrification strategy it will unveil during a highly anticipated briefing next week, according to people familiar with the matter. The supercar manufacturer has snapped up space near its Maranello plant and started clearing the way for a third production line that will be dedicated to making hybrid and electric vehicles, said the people, who asked not to be identified because the information is private. The expansion will also likely include a new battery research-and-development center, they said.

THE POLESTAR 3 IS COMING WITH 372-MILE RANGE

This week Polestar gave the world the best preview yet of its next EV, revealing the profile of the Polestar 3 just a few months ahead of its official debut in October. Set to follow the Polestar 2 sedan, the electric SUV will offer a dual-motor, all-wheel drive layout along with a serious battery pack. The automaker has already promised a range of 372 miles in the WLTP cycle, which should translate to figure just north of the 300-mile mark in the EPA cycle.

The Polestar 3 will set its sights on the rapidly growing cast of mostly German competitors, targeting the likes of the BMW iX, and it should be priced accordingly. The SUV will actually be built stateside for the US market, with Polestar sharing Volvo's Charleston, South Carolina footprint.

This week's preview is all about the exterior design, with the Polestar 3 set to adopt a rakish profile that will steer clear of the coupe shape that automakers have favored lately. The SUV will feature rhombus-shaped details and a prominent visual indentation at the door sills that has become a Polestar trademark, while the front fascia is expected to stick fairly close to the appearance of other Polestar models, giving them a close family look.

The Polestar 3 isn't the only SUV on the way from Polestar. The Polestar 4 is just around the corner, and it will be positioned below the 3 in size, entering another very busy segment. But we'll have to wait a bit longer to see that one.

LOW INVENTORY IS WARPING THE CAR MARKETS, DRIVING UP INFLATION

A shortage of semiconductors for vehicles since last year and persistent supply chain issues has severely curtailed the number of new cars available. And even with $5 per gallon for gas (or more), demand for cars is far greater than the supply, sending prices soaring. The cost of a new car has now risen 12.6% since last year, hitting a national average of $47,148 in May. Surging car prices have become a key contributor to the country’s rising inflation. The latest Consumer Price Index, which measures inflation in the U.S., found that prices for all goods have increased an average of 8.6% over the past year, and new vehicles and used cars were a big contributor to the rise.

By and large, manufacturers agree the franchise system works — even though in the past, some have explored direct sales to their detriment and the detriment of consumers. Good manufacturers know they are best at making vehicles — they don’t have the infrastructure to sell or service them. They benefit more from the high return invested in making cars and trucks. Sales operations burden manufacturing executives, create resource allocation woes, and lead to financing and inventory issues. Dealers remove these burdens from makers. The franchise system simply is the most efficient and effective way to distribute and sell automobiles nationwide. Each franchised dealer invests millions of dollars of private capital in its own facilities to provide top sales and service experiences. This allows auto manufacturers to concentrate their capital in their core areas.

The number of vehicles canceled from automaker production schedules worldwide due to the microchip shortage has surged past 2 million, according to the latest estimate by AutoForecast Solutions. Despite hopeful predictions around the industry, automakers continue prioritizing their available chips for high-end, high-margin models instead of entry-level vehicles. About 234,200 vehicles were added to AFS’ year-to-date tally last week, bringing the total to 2.23 million units lost due to the microchip crisis. Most of that surge in schedule cuts came from North American assembly plants, where AFS estimated an additional 205,200 cuts.

GM CEO SAYS 'WE ARE SELLING EVERY TRUCK WE CAN BUILD'

General Motors Co Chief Executive Mary Barra said on Monday the automaker is "selling every truck we can build" and expanding North American truck-building capacity, even as U.S. gasoline prices hit record highs. Barra made her comments during the automaker's annual shareholder meeting. GM is pursuing a two-track strategy: Investing heavily in electric vehicles for North America, China and other markets, and funding those investments by trying to maximize profits from its North American combustion pickup truck and large SUV lineups.

May’s soft certified pre-owned vehicle sales performance may be more than just a speed bump. The CPO market is likely headed to its softest year in close to a decade. Following four consecutive month-over-month gains to start 2022 on a high note, the 208,423 CPO sales in May marked a 7% decrease from April and more than a 22% year-over-year decrease, according to a Cox Automotive analysis of Motor Intelligence data. Through five months, certified sales have fallen 17.5.% from the same period of 2021, Cox said, and are expected to close the year with the lowest annual sales total since 2013.

Shares of General Motors on Monday closed below the post-bankrupt automaker’s $33 initial public offering price for the first time since October 2020. Amid a broad market sell-off that also pushed Ford Motor and Chrysler-parent Stellantis to new 52-week lows, GM’s stock closed at $32.28 a share, down by 7.8%. Shares of GM have declined about 45% this year, as fears of a recession grow and investors question whether the automaker’s most profitable days are behind it.

Toyota Motor Corp pushed back against critics who say it has been slow to embrace battery electric vehicles (BEV), arguing it needed to offer a variety of car choices to suit different markets and customers. At its annual general meeting on Wednesday, the world's largest automaker by sales doubled down on its position that it would stick with technologies including fuel cell vehicles and hybrids that have for the past two decades made it a leader in cleaner cars.

GM, FORD CFOS SAY THEY ARE PREPARING FOR ECONOMIC SLOWDOWN

The chief financial officers for two of the U.S.’s largest car companies—General Motors Co. and Ford Motor Co.—say consumer demand remains strong, but they are watching for signs of a U.S. recession. At a Deutsche Bank conference Wednesday, Ford CFO John Lawler said an economic downturn is a possibility and that the auto maker was trying to assess the impact of inflation and rising gasoline prices on the broader economy. On Wednesday, the Federal Reserve approved a 0.75-percentage-point rate increase, the largest since 1994. Mr. Lawler said that higher commodity costs already are taking a toll on profitability in some areas. Despite having increased the sticker price for the electric Mustang Mach-E, surging materials costs for electric-vehicle batteries in recent months have wiped out the profit Ford had expected to make on the model, Mr. Lawler said.

Honda Motor Co. and Japanese electronics giant Sony Corp. have inked an agreement to set up a “high-value-added” electric vehicle joint venture this year under the name Sony Honda Mobility Inc. that will deliver a “new generation of mobility and services.” The move, announced in a statement Thursday, teams two iconic Japanese brands from two of the country’s most important business industries: automotive and high technology. The 50-50 company will be established this year with the goal of starting EV sales and providing mobility services in 2025, the companies said. The deal is still subject to regulatory approval.

Volkswagen AG and its Porsche AG unit have agreed to a class-action settlement worth at least $80 million to resolve claims it skewed emissions and fuel economy data on 500,000 Porsche vehicles in the United States, court documents show. The settlement, filed in U.S. District Court in San Francisco, must be approved by a federal judge. It covers 2005 through 2020 model year Porsche vehicles after owners accused the automaker of physically altering test vehicles that affected emissions and fuel economy results.