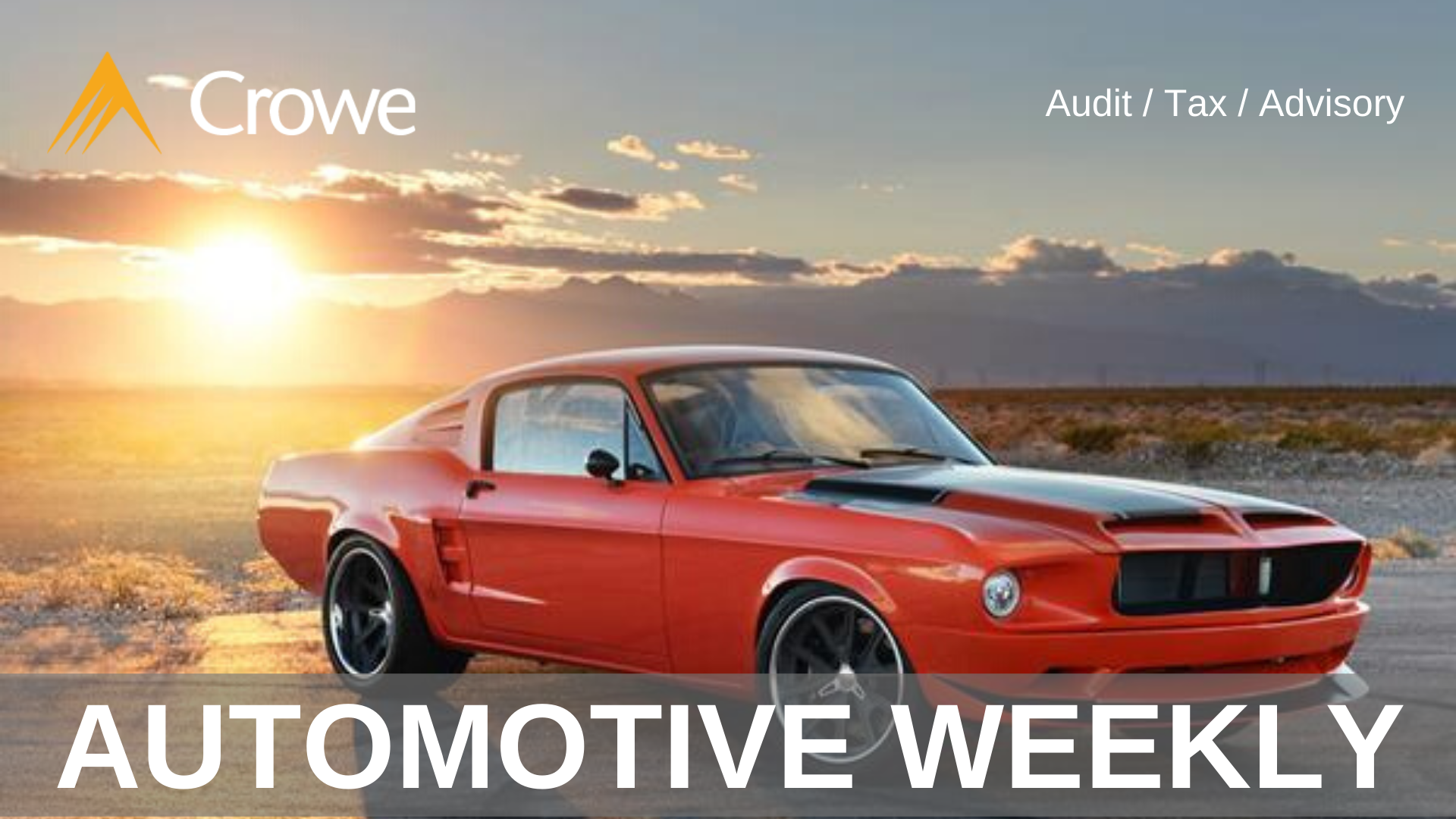 BMW has signed a deal with Northvolt for 2 billion euros ($2.3 billion) to supply battery cells to power the automaker's electric vehicles. Northvolt, a Swedish company started by two former Tesla executives, will manufacture the cells using renewable electricity at a new plant in northern Sweden and deliver them starting in 2024 as part of a long-term contract, BMW said in a statement Thursday.

The deal is also meant to aid BMW's push into electric cars. The automaker plans to introduce five new battery-powered vehicles through next year and offer more than 12 electric models by 2023.

BMW unveiled the iX3 SUV Tuesday, the brand's first electric vehicle to use its flexible architecture that can underpin combustion engine, plug-in hybrid and battery-powered vehicles.

The iX3, which will compete with models such as the Jaguar I-Pace and Tesla Model Y, will debut in China later this year and in Europe in early 2021 and previews an offensive by the automaker that will include two more models next year, the i4 sedan and the larger iNEXT crossover.

Northvolt raised $1 billion last year from investors including Volkswagen Group, Goldman Sachs and BMW to build the battery-cell factory in northern Sweden. VW plans to spend about 1.35 billion euros ($1.5 billion) to erect a joint factory with the supplier in Salzgitter, Germany.

This year has been a difficult time for new vehicle sales, with pickups taking only a minor hit relative to the rest of the offerings from automakers in the U.S. What isn’t selling has been chronicled plenty – sedans, coupes, and minivans – on sort of a generic basis; however, what models the reduced number of buyers are really looking for this year hasn’t been outlined — until now. And the winner is? The Ford F-150 and F-250. Not exactly a surprise since the F-Series has been the best-selling vehicle in America through eight presidential administrations. However, Autotrader has compiled its list of the 10 Hottest Cars of Summer 2020 to highlight what people are looking at.

DEALERS IN STATES WITH NEW VIRUS OUTBREAKS HAVE A BIGGER PROBLEM

Despite sharp spikes in the number of coronavirus cases in Texas and Florida, auto dealers in two of the nation's largest markets say traffic has largely stayed steady. The bigger problem, they say, is new-vehicle shortages as auto plants try getting full production restarted after COVID-19 plant shutdowns. Unlike states like Michigan, which shut down dealerships when the pandemic first flared, those in the South have largely stayed open. And dealers have learned how to somewhat ease the concerns of buyers who might worry about exposing themselves to the virus while kicking the tires in a showroom.

CHANGES MADE QUICKLY DURING PANDEMIC WILL HAVE LASTING EFFECT

Retailers pivoted rapidly to meet the challenges and will incorporate lessons learned from this pressurized environment for years to come, industry leaders said last week during the first panel discussion of the online Automotive News Retail Forum: Dealer Discussions series. Panelists told Automotive News Publisher Jason Stein that changes wrought by the outbreak could attract new talent to the industry, help dealerships better engage with customers digitally and cut costs from the dealership business model. Dealerships worked quickly to create safe business environments for employees and consumers in the initial weeks of the pandemic, procuring cleaning products and altering processes and staffing to accommodate social distancing.

GM FLINT PLANT RUNNING ALL OUT

General Motors’ Flint Assembly plant is running full-on as its 5,000 hourly workers push to meet pent-up demand for the heavy-duty Silverado and Sierra pickups GM builds there. The plant, along with all of the Detroit Three's U.S. factories, sat idle for about eight weeks this spring as the coronavirus pandemic surged, putting production behind. So Gov. Gretchen Whitmer's warning this week that she could shut down auto factories in Michigan once again if residents don’t obey her order to wear masks to slow the spread of COVID-19 has sent the auto industry into a tailspin.

Pressure is building on General Motors Co., Volkswagen AG, and other major automakers to deliver on their electric-vehicle plans, as investor enthusiasm for the technology has grown in recent months. Despite some coronavirus-related setbacks, car companies in the coming months are expected to unleash a wave of new plug-in models in an effort to catch up with Tesla Inc. and meet governments’ tightening restrictions on how much vehicles can pollute.

Based on the first half of July, the Manheim Used Vehicle Value Index is on pace to set an all-time record for the second straight month. That’s according to a mid-month update from parent company Cox Automotive, which said wholesale vehicle prices through July 15 were up 4.4% from June. The mid-month reading of the index was 155.9, up 11% year-over-year. June’s index, which is the current record-holder, was 149.3.

NO US BUILT MERCEDES SEDANS

Lost in Daimler AG’s announcement that it will lose $1.69 billion during the second quarter this year is the fact the company plans to stop making Mercedes-Benz sedans at its plants in the U.S. and Mexico. Daimler said the group’s earnings before interest and taxes represented a loss of 1.68 billion euros, or $1.89 billion, which was better than the expected loss of 2.07 billion euros, or $2.33 billion, according to a preliminary report. Daimler expects to release a full financial report on July 23.

South Korea's rival battery makers LG Chem and SK Innovation, which supply Volkswagen Group, Ford Motor Co., and General Motors, are caught in a growing dispute in the United States as the quest to create jobs complicates an ongoing legal fight, documents seen by Reuters show. Last year, LG Chem sued smaller rival SK Innovation over alleged theft of commercial secrets, seeking to bar SK from producing battery cells in the United States and from importing the components to make the cells. In February, the U.S. International Trade Commission made a preliminary ruling in LG Chem's favor, with a final decision expected in October.

LG Chem, which plans to build a battery factory with GM in Ohio, secured backing from Ohio's governor, who said the ITC needs to "remedy SKI's unfair competition," the documents show, dating from May and seen on Tuesday showed. He said a failure to do so could threaten investment by LG Chem and GM that will "will bring manufacturing jobs back to the United States, ultimately employing around 1,100 American workers".

"SKI is accused of stealing LG Chem's intellectual property and using it to directly compete against workers in Ohio," Ohio governor Mike DeWine said in a statement to the ITC in May.

SK Innovation's clients Volkswagen and Ford say a potential sales ban would be detrimental to EV battery supply and to jobs just when the COVID-19 pandemic has created large-scale unemployment and economic damage.

SK Innovation is building its first battery plant in Georgia to serve VW's EV base in Chattanooga. Tenn. Production of the ID4 electric vehicle is scheduled to begin there in 2022.

The numbers show that 39% of people planning to buy cars are looking to avoid ride-sharing, and 44% of them say they want to decrease or stop public transit use. When people do return to offices, this could increase. Michael Simon is from Elucd, a research firm that has surveyed Americans on transit and returning to work. “Forty-four percent of people who take public transit to work cited that fact, cited public transit as their top concern about returning to the office,” he said.

AutoNation Inc. plans to spend $200 million to $220 million to build 20 or more used-vehicle only AutoNation USA stores over the next three years, following the launch of five stores in 2018. The auto retail giant, which made the announcement with its second-quarter financial results Thursday that set a record for adjusted earnings per share from continuing operations, said it would provide more information on the AutoNation USA rollout during a third-quarter earnings call, CEO Mike Jackson said in an interview.

In a quarter where the retailer notched an earnings record, Lithia Motors also reported strong results in its used-car operations as it released second-quarter fiscal results on Wednesday. Elsewhere among the publicly traded retailers, Penske Automotive Group shared an overall operational update last week, including some details on how it’s used-car sales have progressed. All of the group’s retail dealerships in the U.S. are open, the retailer said, indicating that they saw a month-over-month uptick in new- and used-vehicle unit sales for June.