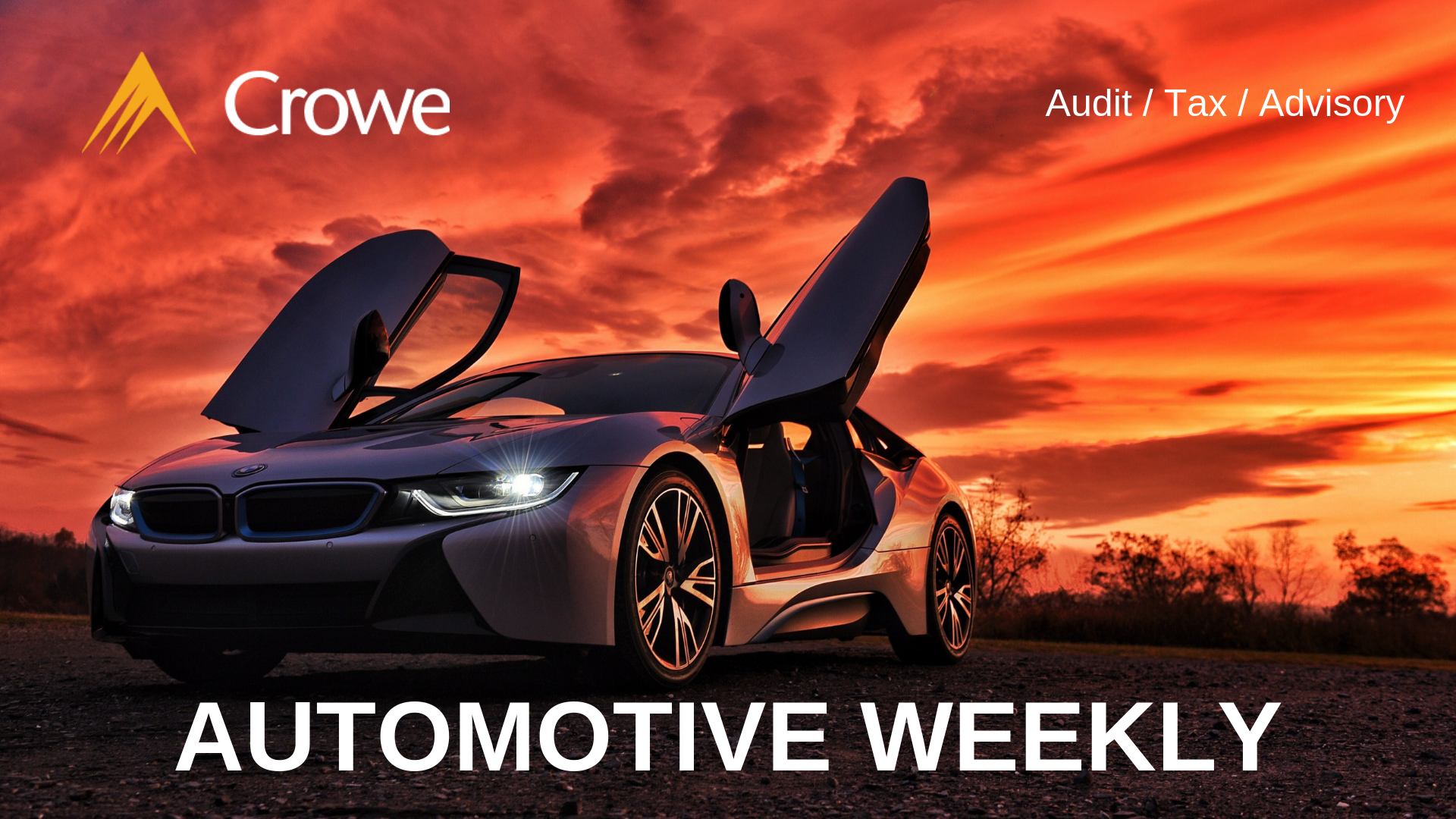 And you thought screens couldn't get any bigger. Mercedes-Benz on Thursday revealed a 56-inch screen that nearly spans the width of a new car's interior, accelerating the auto industry's race to turn the vehicle into a computer on wheels. Daimler, the German automaker that manufactures the luxury automotive brand, said the MBUX Hyperscreen would debut this spring in its new electric sedan, the Mercedes-Benz EQS, in the spring.

A semiconductor shortage is dragging on some of the world’s biggest auto manufacturers, costing Daimler AG, Nissan Motor Co. and Honda Motor Co. production of a range of cars. Mercedes-Benz maker Daimler joined its German peer Volkswagen AG in announcing its affected by the industrywide supply bottleneck, without quantifying the impact. Honda said it will cut domestic output by about 4,000 cars this month at one of its factories in Japan, while Nissan is adjusting production of Note hatchbacks. VW, the world’s biggest carmaker, announced last month that it would need to adjust first-quarter manufacturing plants around the globe because of the shortage.

The auto industry won't soon forget 2020, but it can't embrace a 2021 recovery yet. Last year's turbulence casts a long shadow over this year, assuring us that it'll be a while before we shake the horror — and the heroics — of last year and return to any sense of normal. And "normal" will likely be redefined. Consider the unprecedented moves brought on last year by the global coronavirus pandemic: The proliferation of online retail car sales and home deliveries as dealerships went on lockdown; cancellations of nearly all auto shows; idling car factories across North America for two months; engineers to executives working remotely and General Motors and Ford Motor Co. learning overnight to make lifesaving ventilators, face masks and shields. COVID-19 even changed the way people used their cars, with many seeing it as a makeshift office or private place to escape.

Ford Motor Co. said it will idle its Louisville Assembly Plant next week because of a semiconductor shortage that is threatening to disrupt the industry. Roughly 3,900 workers who build the Ford Escape and Lincoln Corsair will be on temporary layoff from Monday, Jan. 11, through Sunday, Jan. 17. Hourly workers will receive 75 percent of their gross pay during the down time. Ford spokeswoman Kelli Felker, who confirmed the parts shortage, said the automaker will pull ahead a previously scheduled down week to account for the production disruption. Source: Automotive News

Toyota Motor Corp. is cutting production of its full-size pickup truck made in Texas due to a global shortage of semiconductors that has impacted many of the world’s largest automakers. The Japanese company expects to trim output of its Tundra model manufactured in San Antonio by 40% this month as a result of limited chip supplies, a spokesman for Toyota’s U.S. operations said in an email Saturday.

More than a year after its outbreak, the coronavirus keeps finding new ways to hit carmakers. After first wiping out auto demand, the virus is now hindering parts supply: chips used in vehicles are harder to come by because semiconductor manufacturers allocated more capacity to meet soaring demand from consumer-electronics makers such as Apple Inc. The shortage risks dragging on, with lockdowns and travel restrictions prompting housebound consumers to snap up more phones, game consoles, smart TVs and laptops to get online. Lower down in importance to chipmakers, auto manufacturers from Toyota Motor Corp. to Volkswagen AG risk not getting enough goods to fuel a fledgling recovery in their own industry.

Japan’s major automakers have cut production at various factories due to the worsening global semiconductor shortage brought about as chipmakers struggle to meet soaring demand from consumer-electronics companies. Lockdowns and travel restrictions are prompting housebound shoppers to snap up more phones, game consoles, smart TVs and laptops, which in turn has fueled demand for the chips used in those devices. That means carmakers from Toyota Motor Corp. to Volkswagen AG are at risk of not getting enough parts to fuel a fledgling recovery in their own industry. That’s forced automakers all around the world to cut back on production.

NHTSA is creating an initiative to coordinate research, conduct investigations and develop safety standards related to electric vehicle batteries. As part of the initiative, the agency on Friday said it will collect and analyze data, conduct special investigations of EV crashes and noncrash events, conduct research on battery diagnostics and prognostics and explore risks related to cybersecurity and vehicle connectivity. The move by U.S. safety regulators to address battery safety comes as EV fires have become a growing concern for the auto industry, with complaints of battery-related fires starting to stack up.

Ford Motor is ending vehicle production in Brazil under a restructuring of its South American operations. The actions, including closing three plants, are expected to result in $4.1 billion in pretax charges, Ford said Monday. The automaker said it will record about $2.5 billion in cash charges, primarily in 2021, for employee separation, termination, settlement and other payments. In addition, it will post about $1.6 billion in non-cash write-offs for tax receivables and accelerated depreciation and amortization.

REPORT: CONSUMERS NOT QUITE READY TO SWITCH FROM INTERNAL COMBUSTION

The long-term trend toward electric vehicles continues to solidify. But because of the pandemic, consumer anxiety might be shifting automotive priorities toward familiarity and affordability. According to a new report from Deloitte, that could be a reason why 74% of U.S. consumers are looking for a traditional internal combustion engine in their next vehicle. For the report titled, “2021 Global Automotive Consumer Study,” Deloitte surveyed more than 24,000 consumers from 23 countries, seeking opinions regarding issues impacting the global automotive sector.

German carmaker Volkswagen said on Tuesday that sales of its core brand dropped by 15% to 5.3 million vehicles in 2020 as the outbreak of coronavirus and lockdowns imposed to restrict infections hit car dealerships around the world. Volkswagen said it had seen sales recovering in December compared to previous months, rising by 19.5% in western Europe and 14.7% in North America. It added that demand for its electric models jumped by 158% on the year, to 212,000 vehicles.

FCA TO PAY 2.9 BILLION EURO SPECIAL DIVIDEND TO ON JANUARY 29

Italian American carmaker Fiat Chrysler said on Wednesday that the payment of a planned 2.9 billion euro ($3.5 billion) special dividend as part of its merger with France’s PSA had “become unconditional”. The special dividend, worth 1.84 euros per share, will be paid on Jan. 29, Fiat Chrysler (FCA) said in a statement.

In another sign of the pandemic’s unequal impact on American consumers, sales of vehicles costing less than $20,000 plummeted 35% in 2020 while sales of many high-end vehicles rose 20% or more compared to the previous year, data through November 2020 show. The U.S. economy imploded earlier this year before bouncing back, but job losses were heavily concentrated among Americans in lower-income brackets, depriving them of income they might otherwise have used to buy cars, sport utility vehicles (SUVs) or pickups, analysts said.

Taxi business in New York City has dropped by 90% since the start of the pandemic, even as mass transit ridership has fallen precipitously. The situation, repeated across the country, reflects a variety of factors, including a huge increase among those working from home and a sharp decline in business travel. But even among those who must commute, there’s been a sizable shift away from mass transit and ride-hailing services to the use of personal vehicles. And that is leading not only to a surge in car sales, both new and used, but also in the type of vehicles American motorists are purchasing. Among new car buyers, in particular, motorists are ordering vehicles loaded with the latest in high-tech features, from smart safety devices to infotainment systems, as well as in-car WiFi and other technology, members of an expert panel agreed during a session at the virtual CES 2021.

The NTSB made a series of recommendations to address this issue, including standardized automaker emergency-response guides modeled on International Standards Organization (ISO) standard 17840 and SAE International recommended practice J2990. Availability of these guides could also be factored into a vehicle's federal New Car Assessment Program (NCAP) safety rating, the agency suggested.

Note that NCAP (which is primarily composed of crash-test ratings) and safety regulations are overseen by the separate National Highway Traffic Safety Administration (NHTSA). The NTSB investigates transportation safety issues and makes recommendations, but has no rule-making power.

The NTSB report also recommended additional research into ways of de-energizing damaged battery packs, or reducing the possibility of thermal runaway, which can result in fires. Years ago, the NHTSA considered the idea of "draining" EV batteries of electrolyte to halt any reactions brought about by a collision. But the idea was abandoned as it would take too much specialized knowledge of every vehicle model.

Normalized for vehicle miles traveled, instances of fire are far lower or EVs than for gasoline vehicles. However, as noted in the NTSB report, first responders may not be as familiar with EVs as with gasoline vehicles. The same goes for the general public, which is why reports of EV fires tend to get spotlighted.

The past year has brought more attention to EV fires because of high-profile incidents involving the Chevrolet Bolt EV, Hyundai Kona Electric, and Tesla Model S and Model X. Most were related to charging, however, not crashes.