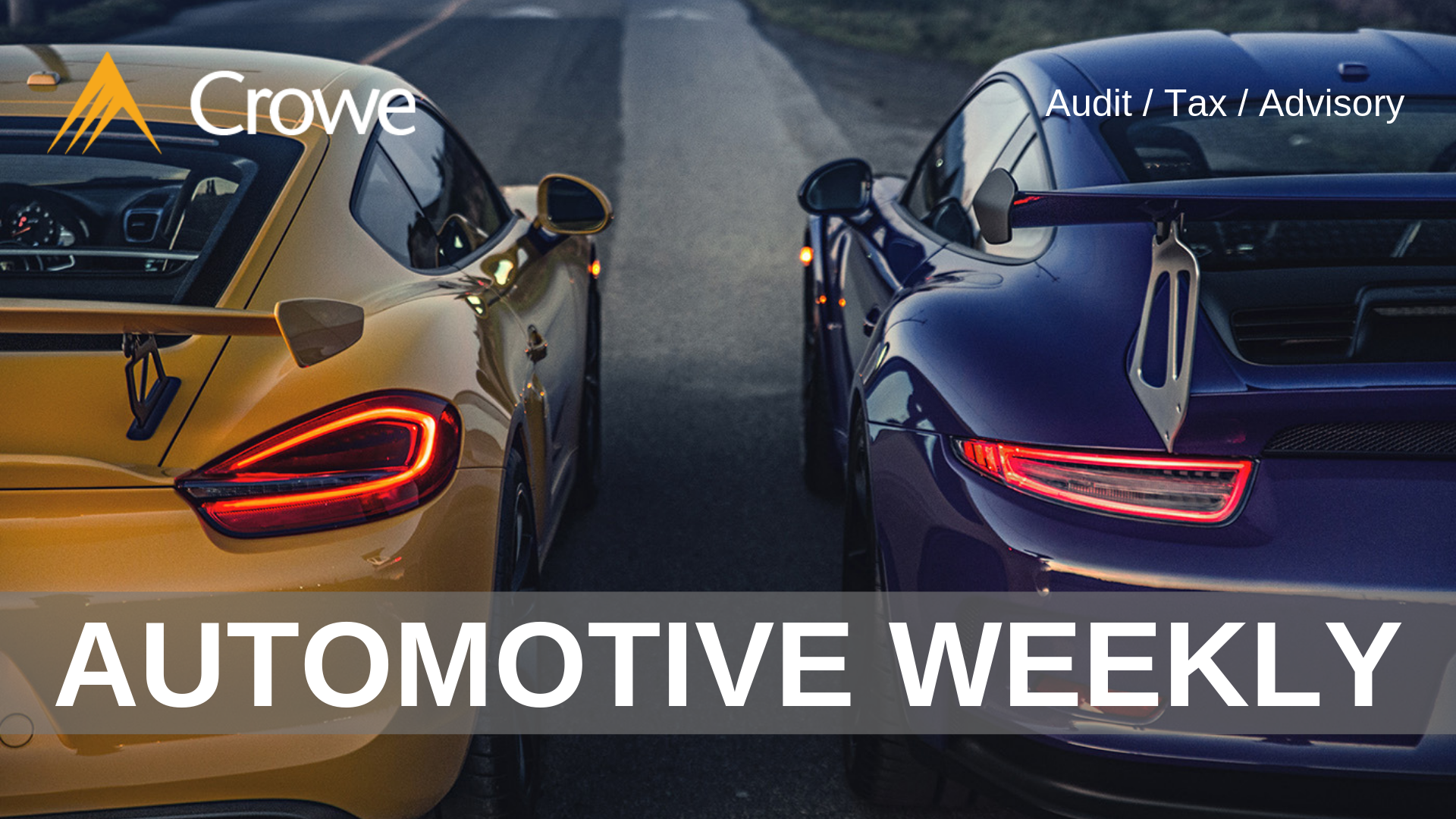 Uber Technologies Inc., like rival Lyft Inc., does not have a road to profitability unless it does one of two things: Get rid of drivers or raise prices. Expect the ride-hailing giants to try to do both, now that Uber and Lyft are public companies that will have to face Wall Street pressure every three months. But considering how long it may be before autonomous robotaxis are prevalent on our streets, price increases are much more likely, and may be largely hidden by the companies.

Investors in normal, run-of-the-mill car manufacturers would be hard pressed to find anything negative about results which showed revenues up 13% and profits growing even faster. But this is Italian luxury sports-car maker Ferrari, and its high share priced is based on its perceived exclusivity. So after the initial euphoria generated by its first quarter EBITDA (earnings before interest, tax, depreciation and amortization) profits 14% higher at 311 million euros ($349 million) cB/compared with the same period last year as sales advanced 13% to 940 million euros ($1.1 billion), investors started to worry if this was too good to be true.

British Columbia’s high-end auto dealers are suffering sales losses and thinner margins due to dramatic increases in provincial tax that went into effect one year ago, adding as much as 20 percent to a new vehicle on top of the five percent federal GST. “Not only were the effects real, they were immediate,” said Paul Killeen, customer-relations supervisor at Brian Jessel BMW in Vancouver. “Watching the PST go up as high as it did ... made people think differently about how they are fiscally, and that pause is what’s really brought the market down.” On April 1, 2018, B.C.’s NDP government raised the provincial sales tax to 15 percent from 10 on new and used vehicles priced between $125,000 and $149,999. On vehicles $150,000 and over, the tax increased to 20 percent from 10. There’s also the five-per-cent federal GST, bringing the total tax bill on a $150,000 car to $37,500, a full 25 percent. The increase also applied to leased vehicles, including customers already in a contract. “There’s no question that people that were considering [a new BMW] or are continuing from one high-end product to another, now they’re considering something more cost-effective,” said Killeen.

Morris Lubinitch, general manager at McLaren Vancouver, said the tax prompted some customers to walk out of deals. “[Our clients] are in business, and they’re smart with their money.” It was a similar story at Jessel BMW, with potential buyers making last-minute changes to avoid the tax. “I’ve had people come in here that were looking for a 7-series product and they’ve ended up buying a one-year-old 7 series – especially purchasers, as opposed to someone who’s leasing a vehicle,” said Killeen. The depreciation associated with some of the higher-end cars can bring the price of a used model below that $125,000 bracket, he said.

Blair Qualey, president of the New Car Dealers Association of B.C., said local businesses are losing out to other jurisdictions that charge lower taxes. Many luxury-car clients hold residences or businesses in other provinces or the United States, and are shopping in those areas for their luxury-car fix, he said.

At Ferrari-Maserati of Vancouver, General Manager Mark Edmonds said sales declines of between 15 and 20 percent have led to staff cuts at the store on Burrard Street, the hub of luxury-auto dealers. “I employ four fewer people than I did before the government’s announcement,” said Edmonds, who currently has 27 people on staff. “I can barely sell a car between $150,000 to $225,000 because taxes are such a humongous portion of the cost of the car.”

Maserati sales across B.C. plummeted 45.6 percent last year compared with 2017, according to statistics compiled by DesRosiers Automotive Consultants. Of the five models offered by the brand, three have a starting price of more than $125,000, two start at more than $150,000. There’s no indication of how much of the decline was the result of increased taxes.

To avoid the tax, some customers are purchasing vehicles in other jurisdictions, Edmonds said — such as California or Alberta — adding that a long-time client said he would buy his next Ferrari in California, where he also owns a home. Every sale Edmonds does “is a grind” as prospective customers aggressively seek discounts. “Nobody just says ‘here’s my bank draft. I’m excited and happy.’ It’s a fight. And the first thing they ask is ‘how do I get around this [tax].’” Discounts mean lower profit margins, said Edmonds. “Last year, we had a number of cars that were $130,000. After they announced that tax, I have had to discount them. There’s just no way around it; the difference between $124,900 and $125,000 is about $6,000 [in taxes].”

What has picked up are sales to out-of-province buyers, said Edmonds, citing the sale of a 2011 Ferrari 458 to an Ontario customer. “That’s a nice car we would love to keep in B.C., sell it to a guy in B.C., have him service it here and trade it back with us. But now the car is gone.” And so is sales tax revenue that would have been collected by the province, he said. “It’s a little bit of a vicious circle. I submitted substantially less PST in 2018 than I did in 2017. So, forget about my sales, I sent them less sales tax.” The province has characterized the tax hike as “one of the ways our government is improving tax fairness progressivity,” and estimated it would generate $20 million over two years.

The Ministry of Finance told the Vancouver Sun the government did not break down how much PST it received for different categories of cars, and was unable to say whether the new tax rates have affected revenue. Wolfgang Hoffmann, president of Jaguar Land Rover Canada, said while sales across the country grew last year, they stayed “flat” in B.C. “It’s not a very good situation, unfortunately,” he said at the recent Automotive News Canada Congress in Toronto. “We had a very fantastic year last year, but there are some dealers who unfortunately suffered, stayed flat or couldn’t grow.”

The province’s dealers’ association had lobbied the government to address its concerns in February’s provincial budget.

Two of Ford Motor Company's discontinued small cars may come back to haunt it for the second time. The automaker is facing potential legal action as a law firm in California hopes to undo an earlier class-action lawsuit in pursuit of an even bigger payday for consumers over transmission woes in its Focus and Fiesta models, The Detroit Free Press reported last week. Ford could be looking at a $4 billion liability in a lawsuit that alleges the automaker knew about faulty transmissions and then lied to buyers to cover up the issue.

Litigation surrounding the dual-clutch automatic transmissions found in the Fiesta and Focus has existed for years, and most recently, Ford settled with owners in a class-action lawsuit. However, Public Citizen, a non-profit firm arguing the case for free, now hopes to undo the $35 million settlement to ensure owners get a fairer shake. There are 1.9 million drivers who purchased or leased a 2012-2016 Focus or 2011-2016 Fiesta that have complained of shuttering, jerking, slowed acceleration, and more from the transmissions. In a statement, Ford told the Free Press that the original settlement was fair.

"Ford is committed to providing our customers with top-quality vehicles. We continue to deny the allegations in this lawsuit, but rather than continuing with the litigation, Ford entered into a settlement agreement with lawyers representing these plaintiffs. That settlement is fair and appropriate and we look forward to final court approval," the company said.

Michael Kirkpatrick of Public Citizen said the $35 million would be a sweet deal for Ford, but argued other poor behavior from Ford to convince judges to toss out the settlement. One example includes a 2014 Focus that housed one of the defective transmissions. Ford allegedly "induced" the individual into buying the car. Three days after the purchase, the new owner brought the car back for repairs. Nothing fixed the bad transmission, and when the owner asked for a refund, Ford refused. Days before the owner's case received a trial jury, Ford admitted it broke lemon laws.

The owner was awarded $550,000 for one case, which makes the $35 million settlement look slim in comparison. There are another 1,200 cases pending in California alone, and 12,300 owners have joined a "mass-action" lawsuit after declining to participate in the class-action lawsuit. Kirkpatrick believes Ford could be facing settlements, fines, and buybacks worth $4 billion if owners are victorious in court.

UBER AND LYFT ADD TO CONGESTION

Uber and Lyft have long argued that ride-hailing apps have the potential to make cities better by ameliorating traffic and reducing personal car ownership. But there is a growing body of research that suggests the opposite is taking place. The latest study, published Wednesday in the journal Science Advances, underscores how Uber and Lyft are worsening traffic in the city that gave birth to the ride-sharing phenomenon.

FORD CFO: WE WILL LOOK DIFFERENT, BUT IT WILL KEEP DOMINATING IN PICKUPS

The Trump administration is nearing a deal with Canada and Mexico to remove U.S. steel and aluminum tariffs as part of discussions about a new trade agreement among the three countries, Treasury Secretary Steven Mnuchin said Wednesday. "I think we are close to an understanding with Mexico and Canada" on removing steel and aluminum tariffs, Mnuchin told a Senate Appropriations subcommittee hearing. U.S. Trade Representative Robert Lighthizer is in “active discussions” over the issue, he said.

Federal Communications Commission Chairman Ajit Pai on Wednesday delayed plans to begin in June a comprehensive review of a valuable band of spectrum reserved for vehicles to communicate with one another. Pai on Tuesday had called for the FCC “to take a fresh look” at the largely unused 75 megahertz of spectrum in the 5.9 GHz band. This was reserved in 1999 for automakers to develop technology to allow vehicles to exchange data about their location, speed, and direction to help avoid accidents, among other things.