Hedging Is Easier Than Ever – Should Credit Unions Take the Plunge?

Credit unions generally have shied away from using derivatives to hedge their exposure to fluctuating interest rates. New accounting guidance from the Financial Accounting Standards Board could make some of them reconsider their position.

The so-called shortcut method long has been one of the accounting rules that failed to live up to its potential. Previously, a failed shortcut method hedge was evaluated as if hedge accounting was never applied, which could result in a restatement – even if the hedge would have qualified under another method.

ASU 2017-12 mitigates the risk of restatement by allowing entities using the shortcut method to include in their original hedge documentation a “long-haul” method (such as regression analysis) for assessing hedge effectiveness, which would be applied if it were later found that the shortcut method should not have been applied or is no longer appropriate. As long as the hedge would be considered “highly effective” at offsetting the changes in fair value or cash flow of the hedged risk using the specified long-haul method, credit unions no longer will face the burden of potential restatement.

The ASU also simplifies quarterly effectiveness assessments for long-haul method hedges. Historically, entities frequently were required to perform regression analysis every quarter for the life of a hedge, even if the hedge was designed to be highly effective. The new ASU permits a credit union to instead elect to perform subsequent quarterly assessments using only qualitative methods if, at inception, it can “reasonably support” an expectation of high effectiveness.

Entities that elect to use a qualitative method for assessing hedge effectiveness will still be required to perform a quantitative assessment (for example, a regression analysis) at hedge inception. However, the ongoing quarterly assessments would be performed qualitatively. This would involve validating and documenting that the terms and conditions of the hedged transaction and hedging derivative have not changed. As a result, if credit unions design accounting hedges appropriately, they might be able to avoid the need for ongoing regression analysis.

ASU 2017-12 removes that burden. It permits a credit union to, for example, hedge a 10-year fixed-rate instrument for two years using a two-year interest rate swap, without the difference in duration causing ineffectiveness that could jeopardize the use of hedge accounting.

The changes to the standard that permit partial-term hedging and the measurement of the hedged item using only the benchmark component cash flows pave the way for another change that credit unions with fixed-rate loan portfolios might find particularly attractive in rising interest rate environments – the creation of the last-of-layer technique for hedging pools of prepayable fixed-rate financial assets.

In the past, hedging a pool of long-term fixed-rate loans generally was not possible. However, under the new standard, a credit union can use the last-of-layer technique to hedge only the last layer of a closed portfolio of prepayable fixed-rate financial assets up to an amount not expected to be affected by prepayments, defaults, or other events that affect the timing of cash flows.

Under this technique, prepayment risk is not considered in the measurement of the hedged item; however, the credit union would be required to document at inception and each subsequent quarter its expectation that the hedged portion of the assets will remain outstanding for the life of the hedge.

For example, if a credit union were to designate a $100 million last-of-layer hedge, it would need to assemble only a pool of loans and securities large enough to result in at least $100 million on the last day of the hedge term after prepayments, defaults, or other such events. 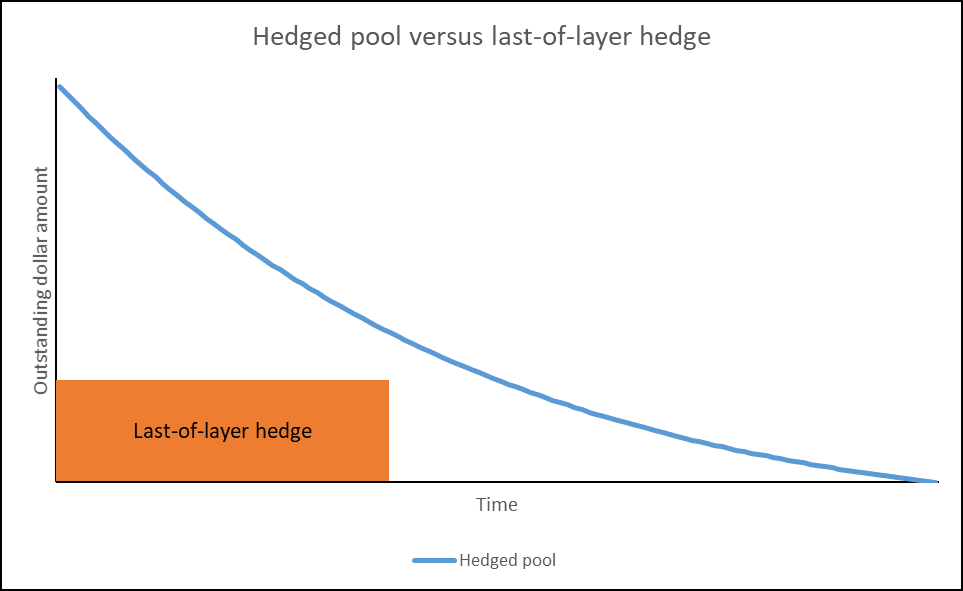 While a last-of-layer hedge cannot use the shortcut method, assessing effectiveness using a long-haul method is simpler than it seems. Rather than measuring the change in fair value of the entire hedged pool (which likely contains mixed maturity dates and rates), the change in fair value of the hedged last-of-layer pool can be measured as if it were one hypothetical instrument, with the balance and maturity date corresponding to the hedge designation and the single coupon set equal to the designated benchmark interest rate. While a quantitative effectiveness assessment is still required at inception, in normal circumstances, last-of-layer hedges will be able to use a qualitative method to assess effectiveness in subsequent quarters.

Hedging deposits still has its challenges; however, the last-of-layer hedge discussed earlier illustrates that credit unions can now easily hedge fixed-rate loans with a pay-fixed/receive-floating swap to economically convert them to variable rate loans.

As an added bonus, the ASU also permits held-to-maturity (HTM) securities eligible to be hedged using the last-of-layer method to be transferred into the available-for-sale (AFS) category without tainting current or future HTM classification. It isn’t necessary to intend to enter into a hedge – the security simply needs to be eligible for transfer (that is, fixed-rate and prepayable). Any unrealized gain or loss existing at the time of transfer is recorded in accumulated other comprehensive income.

Credit unions generally must have at least $250 million in assets and a composite capital adequacy, asset quality, management, earnings and liquidity/asset liability management (CAMEL) rating of 1, 2, or 3. Those with assets of less than $250 million may request permission from the appropriate NCUA field director.

Under NCUA rules, credit unions can use only derivatives denominated in U.S. dollars and with a maximum term of 15 years.

Approved credit unions also must have senior executive officers deliver a comprehensive derivatives report to the board of directors on a quarterly basis, and have staff deliver a comprehensive derivatives report to senior executive officers and, if applicable, the asset liability committee, on a monthly basis. The reports must include:

In addition, credit unions using derivatives must provide board members with annual training that conveys a general understanding of derivatives and the knowledge necessary to exercise strategic oversight of such programs. And they must obtain an annual financial statement audit.

The new ASU has greatly simplified hedge accounting. Credit unions might well find the hurdles that have traditionally kept them from reducing their risk exposure with derivatives have been knocked down.