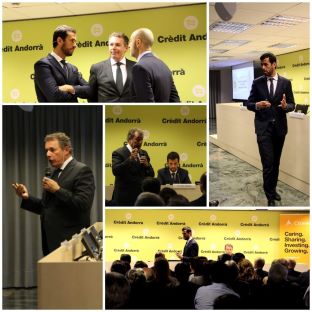 Mr. Antonio Bisbal Galbany Managing Partner of Crowe Andorra, specialize in the area of taxation, and Mr. Gerardo Roca Lawyer and Partner responsible for the Legal Department of Crowe Spain and specialize in advising on M&A operations and business reorganization, during yesterday’s conference, supported by Crèdit Andorrà, which was assisted by more than 180 people, where the “Challenges of the Andorran family business: generational relief or divestment” was lay out and highlighted due to the importance of these companies in the Andorran economy.

In addition, will be able to visualize the interesting interview broadcast to Radio Televisión de Andorra in “Ara i aqui” program, where Mr. Antonio Bisbal Galbany and Mr. Gerardo Roca, present a summary of the conference.

Last september, Crowe Andorra acted as a supporter of the Excalibur Race Andorra 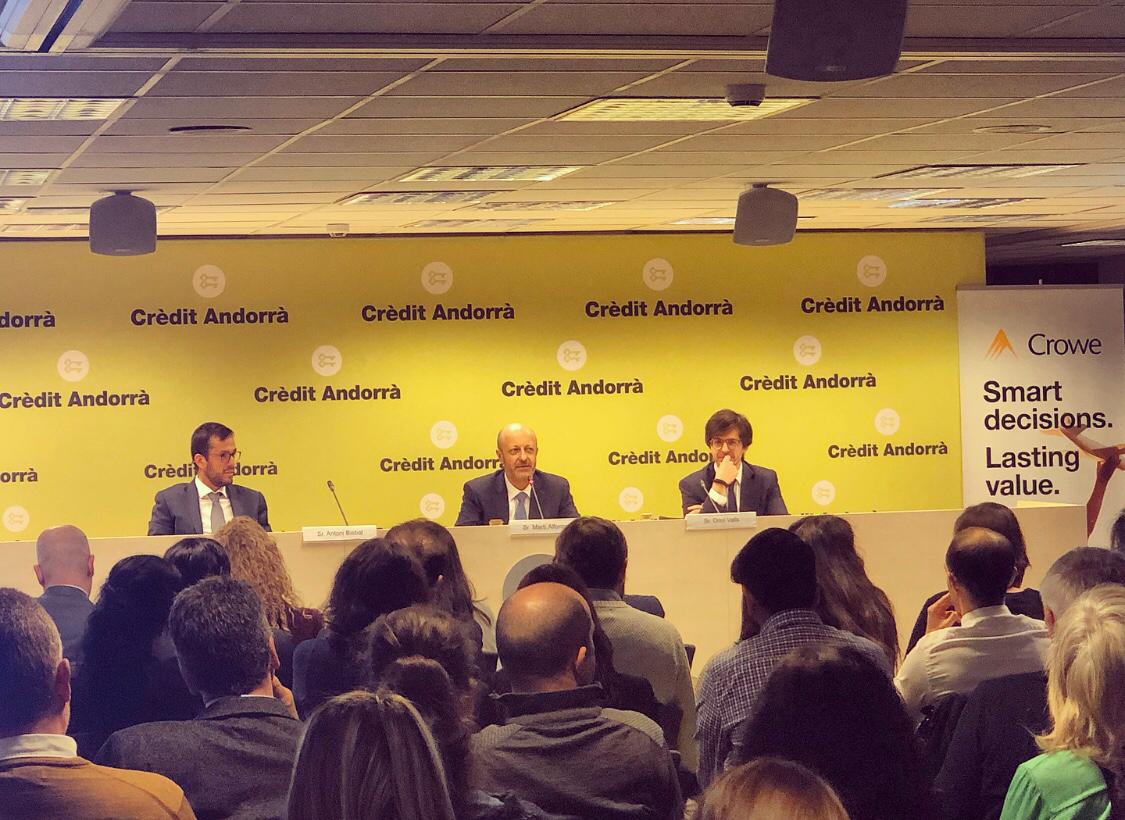 Conference Six years of application of the Corporate Income Tax

Crowe Andorra, in the hands of our Managing Partner, Mr. Antoni Bisbal Galbany, and our Director of Tax, Mr. Oriol Valls Santamaria, together with Crèdit Andorrà, on Thursday January 31, offered us an interesting conference, where they presented a brief tour of the six years of application of the Corporate Income Tax in the Principality of Andorra. 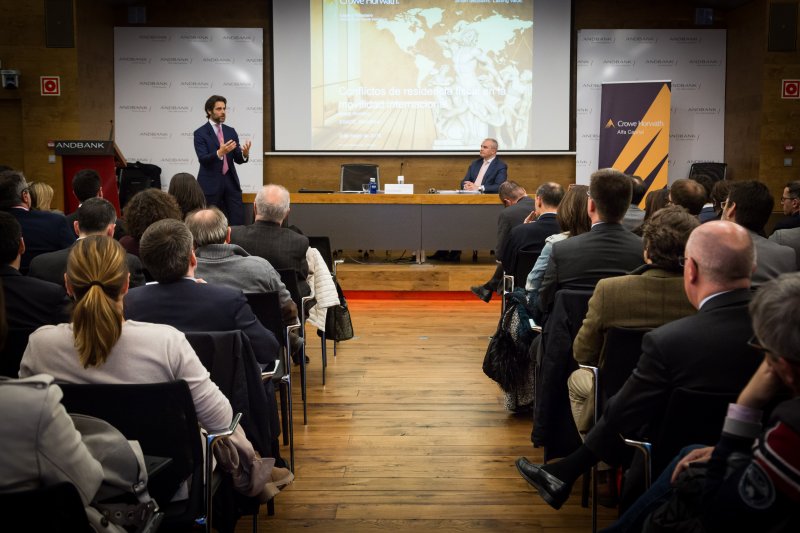 In a global environment such as the one nowadays, people’s cross-border mobility is more and more common.

This can be due to work, economic, academic and familiar purposes, as well as seeking a more secure legal and social environment. In various occasions, the promotion of the internationalization collides with the States’ interest in not losing taxpayers and avoiding situations of tax fraud. Therefore, States design a series of mechanisms in order to retain taxpayers and/or attract them with, essentially, tax collection purposes.

We should add to this circumstance the additional complexity of another jurisdiction and its fiscal system also struggling to adjudicate the fiscal residency of a natural person, creating double-taxation situations and, in broad terms, legal uncertainty.

The purpose of this session is addressing the recent interpretations on fiscal residency given by the administrative doctrine, the inspection bodies and the Spanish courts, as well as the different tools available to taxpayers and their evolution in order to solve double-residency or double-imposition conflicts. This casuistic is ample and fully dependent on means of evidence that rely on numerous factual elements.

Andorran taxation: implications and regulation of the fiscal offence

The Andorran Law on fiscal offences, which was drafted less than two months ago, is based on the Spanish model. This was corroborated yesterday by an expert on the matter at the Conference on Andorran Taxation: Implications and construction of the fiscal offence organized by Crèdit Andorrà. The expert is the former State Treasury Inspector Joan Iglesias, one of the two keynote speakers, that assured that, in Spain, the fiscal offence will soon be 40 years old and “is one of the figures that generate the most legal uncertainty”.

Iglesias added that this feeling generates a negative domino effect: “This generates mistrust and doubts for the very taxpayer but also to potential investors that are interested in settling in a fiscal territory. Therefore, he recommends Andorra to “be aware in furnishing all doses of legal certainty in order for everyone to know which are the rules of the game and the circumstances that may end in deprivation of liberty (in one word, prison) due to non-payment of taxes.”

Its table companion and also an expert on the matter, Antoni Bisbal, was more brief in its explanation and stressed that there are no motives to worry with the implementation of the fiscal offence in the Andorran Criminal Code: “Regardless of that, everyone shall comply with the required regulation. We have to be good taxpayers and if, in addition, we now have the sword of Damocles that also states that now or soon you can end up in prison, even more pressure is exerted on the people. But a message of calm to the taxpayers and to my clients needs to be conveyed: We should have done things right before and we shall do things right from now on, therefore, nothing will happen.”

Bisbal also acknowledged that there are “interpretative” issues, but that transparency in everything and handling all the documentation, justice helps to resolve these doubts and no one has to end up in prison. He also stated that “the only worrying situation is for those that intend to recover non-existing VATs or for those that fiscally plan in order to avoid taxation.”

At the conference, Bisbal and Iglesias conveyed that it is important for every citizen to clearly understand the situations that can entail a sentence of these characteristics and also know how it works: How the Tax Administration will apply it, through which proceedings, how will the taxpayers’ guarantees be established, how the Criminal Judge will act or how he will act in the proceedings.

A new topic at the Principality and, therefore, unknown for the majority of the population. This is the reason behind Crèdit Andorrà’s contribution with a conference that will help to gain more knowledge on taxation matters.

Meeting on Investment and Business in Andorra (Madrid)

The Andorran Minister of Foreign Affairs participates in the Third Meeting on Investment and Business in Andorra, that has addressed the challenges and opportunities of Andorra with regard to Europe.

Gilbert Saboya, Minister of Foreign Affairs of the Andorran Government, has analyzed the key aspects of the incorporation of the Andorran economy into the internal market of the European Economic Community. Saboya insisted in the existence of “an Andorran will to participate in the EU’s internal market” and its incorporation would lead to Andorra becoming a “more attractive destination for foreign investment”.

The idea behind it is “seeking the equilibrium and the participation in the Andorran internal market with the purpose of finding a framework of social agreement that enables to develop new opportunities”. In fact, he has stressed that “in order to be competitive and attract investment, Andorra needs to have access to the European single market”.

In this sense, Saboya explained that “despite the fact that the Andorran-EU Association Agreement will not permit the Andorran community to take decisions on certain topics, it will be able to participate in the process and be able to adapt to the implementation of European Regulations”.

Moreover, Saboya insisted in the fact that “Andorra has already advanced negotiation compromises with countries such as The Netherlands, Italy or Belgium”, beyond its main partners (France, Spain and Portugal).

The Third edition of the Meeting on Investment and Business in Andorra was also attended by Claude Maerten, Chief of the Occidental European Division of the SEAE and deputy chief negotiator of the Association Agreement between Monaco, Andorra and San Marino with the EU.

Maerten agreed with Saboya in the fact that “it constitutes a special opportunity for Andorra to gain access to the European single market, and that it has to profit from this and develop its economy’s potential”.

He explained that “It is not only about Andorra benefitting from the Union, but about other Community markets can benefit from Andorra”.
In this sense, Maerten stressed that “Europe will make everything possible to reach an advantageous agreement for Andorra and the EU Member States, and we will negotiate the common principles and the four liberties related to the free movement.

The Meeting was also attended by the Spanish Ambassador to Andorra, Manuel Montobbio; Francisco José Montiel, Principal Associate of the Tax Area of Deloitte; Marc Maresceau, Professor of International Law of the University of Ghent; and Vladimir Fernández, Managing Partner of Crowe Horwath.

The Third Meeting on Investment and Business in Andorra was attended by more than 200 people, entrepreneurs, political and institutional representatives and was mainly sponsored by Crèdit Andorrà, one of the main financial groups of reference in Andorra and with presence in Spain through Banco Alcalá, along with the collaboration of the FEDA and Andorra Telecom.