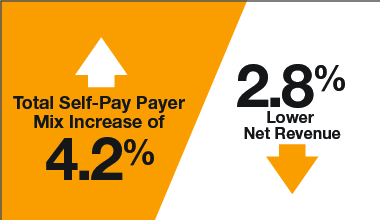 CHICAGO (July 13, 2017) – The Affordable Care Act (ACA) has offered states the opportunity to expand Medicaid, thus shrinking the number of self-pay patients, or patients without health insurance who are responsible for their own bills. Congress is working to repeal the ACA, and although the exact details haven’t yet been determined, the expected changes all point to an increase in the number of self-pay patients. According to data from the Crowe Revenue Cycle Analytics (Crowe RCA) solution, more self-pay patients equals less revenue for hospitals.

Analysis supporting this can be found in the report, “Self-Pay Becomes Ground Zero for Hospital Margins: Lower Net Revenue Realization Impact Follows,” prepared by Crowe Horwath LLP, one of the largest public accounting, consulting and technology firms in the U.S. The firm has implemented the Crowe RCA solution, which captures every patient transaction for purposes of automating hindsight, accounts receivable (AR) valuation and net revenue analyses, in more than 850 hospitals. Within its benchmarking database, Crowe analyzed a sample portfolio of 357 hospitals in Medicaid expansion states as of 2017, and shared its findings in the report.

From 2013 to 2016, hospitals in Medicaid expansion states saw an average increase of 6 percent in patients covered by Medicaid, from 12.3 percent to 18.3 percent. The corresponding self-pay payer mix decreased nearly 4 percent for the same time period, from 7.4 in 2013 to 3.5 percent in 2016.

“With changes to healthcare legislation looming, hospitals need to prepare for a return to a higher percentage of self-pay patients. Our data shows that for the average hospital, every 2 percent payer mix shift from Medicaid back to self-pay results in a 1 percent reduction in overall net revenue,” said Brian Sanderson, managing principal of Crowe healthcare services group. He added that the cash flow impact is also significant. Balances for the average self-pay patient sit in AR for 96 days, compared to Medicaid balances, which sit in AR for 64 days.

Further, more patients will continue to move to high-deductible health plans (HDHPs), defined by the IRS as between $1,300 and $6,600 for the patient responsibility portion, or self-pay after insurance. For the average hospital in a Medicaid expansion state, it’s estimated that the combination of the ACA repeal and more patients moving to HDHPs will increase the self-pay payer mix by 4.2 percent. As a result, total net revenue is expected to decrease 2.8 percent.

“The simultaneous combination of the ACA repeal and more patients moving to HDHPs is creating ‘ground zero’ for the average hospital. It’s critical that hospitals put practices in place to focus on improving self-pay collections,” said Sanderson.

According to the report, these best practices include:

To download a copy of the report, please visit www.crowehorwath.com/benchmarking-release.

About Crowe Horwath
Crowe Horwath LLP (www.crowehorwath.com) is one of the largest public accounting, consulting, and technology firms in the United States. Crowe uses its deep industry expertise to provide audit services to public and private entities while also helping clients reach their goals with tax, advisory, risk and performance services. Crowe is recognized by many organizations as one of the country's best places to work. Crowe serves clients worldwide as an independent member of Crowe Horwath International, one of the largest global accounting networks in the world. The network consists of more than 200 independent accounting and advisory services firms in more than 130 countries around the world.