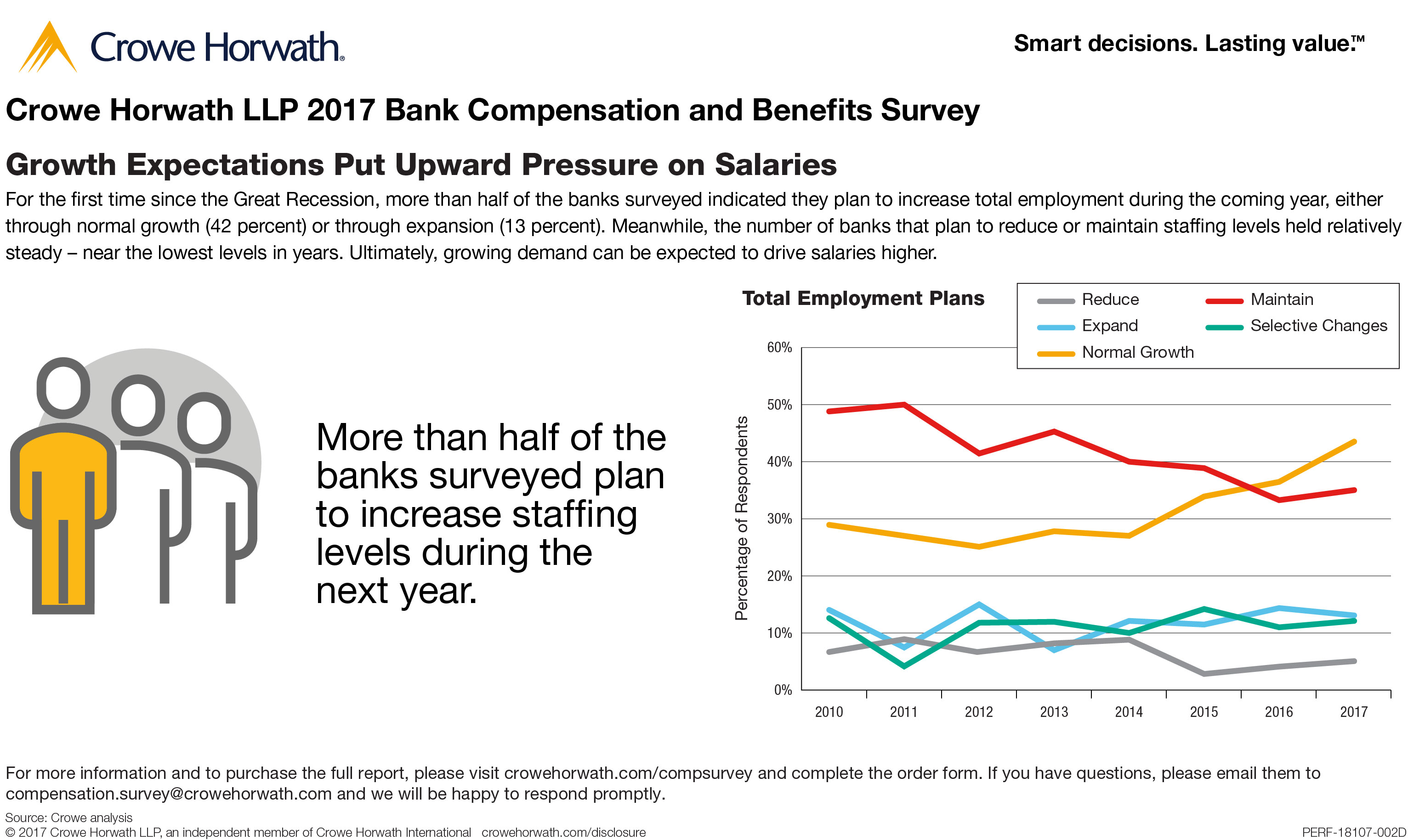 Survey findings indicate bank salary increases are on the horizon

CHICAGO (Sept. 12, 2017) – The labor market is tightening and turnover is increasing, but banks are planning to grow employment, according to data from the Crowe Horwath LLP 2017 Bank Compensation and Benefits Survey. Crowe, one of the largest public accounting, consulting and technology firms in the U.S., conducts the annual survey, now in its 36th year. The survey, which compiled data from 375 banks, also shows salary and bonus benchmarks for 263 job positions.

For the first time since the Great Recession, more than half of the banks surveyed said they plan to increase total employment during the coming year, either through normal growth (42 percent) or through expansion (13 percent). Meanwhile, the number of banks that plan to maintain current staffing levels held relatively steady at 35 percent, which is near the lowest levels in years. “As banks look to increase their staffing levels, they’ll be competing against other institutions to secure talent, so we can expect to see upward pressure on salaries,” said Timothy Reimink, a managing director in the Crowe financial services performance consulting group.

In addition to the upward pressure on salaries, for the third consecutive year banks reported that employee turnover rates climbed again and have reached record high levels – 19 percent for nonofficers and 7 percent for officers.

This year, the survey also asked about CEO/executive succession planning. Thirty-seven percent of banks surveyed did not have a documented plan for executive succession, with the most equipped being banks with less than $250 million in assets and the least equipped being banks with assets greater than $5 billion. “Executives at smaller banks are heavily involved in the day-to-day operations, so an abrupt change would be disruptive – which may be why smaller banks are more likely to have a formal plan in place,” said Reimink. He noted that a documented succession plan can be helpful for banks of all sizes as it allows for a smooth transition, defines expectations and a reporting structure, eases tensions for employees and gives confidence to the community the bank serves.

Employees with above-average performance ratings received the highest percentage pay increases at 5.2 percent as compared to average (3.7 percent) and below-average (2.1 percent) performers. Additionally, the percentage pay increase for all three performance levels has increased steadily during the past two years. “The across-the-board pay increases could be a sign of an increasingly healthy industry, more competitive labor market and greater investment in employees,” said Patrick Cole, a specialist in human resources consulting for Crowe tax services. “Pay increases directly relate to increases in total rewards and support the assertion that increased compensation is necessary to attract and retain current and future employees. When competitors show an interest in your high-performing workforce, you’re more likely to make an effort to protect and keep it, using pay increases or increased benefits.”

For more information on the survey findings, including an infographic, please visit www.crowehorwath.com/compsurvey-nr.

About Crowe Horwath
Crowe Horwath LLP (www.crowehorwath.com) is one of the largest public accounting, consulting and technology firms in the United States. Crowe uses its deep industry expertise to provide audit services to public and private entities while also helping clients reach their goals with tax, advisory, risk and performance services. Crowe is recognized by many organizations as one of the country's best places to work. Crowe serves clients worldwide as an independent member of Crowe Horwath International, one of the largest global accounting networks in the world. The network consists of more than 200 independent accounting and advisory services firms in more than 130 countries around the world.