The New Revenue Recognition Rule: What It Means for Asset Managers

By Brian J. Hecker, CPA, and Patrice R. Muller, CPA
share
Many asset managers still are getting up to speed with the requirements of the Financial Accounting Standards Board’s Accounting Standards Codification Topic 606, “Revenue From Contracts With Customers,” and how it will affect their financial statements, including a possible drop in revenues in the short term when revenue includes performance incentives and similar terms. Several issues in particular could pose challenges for asset managers.

The new standard in a nutshell
Issued in May 2014, Accounting Standards Update (ASU) No. 2014-09 – and its international counterpart, International Financial Reporting Standards (IFRS) 15, also titled “Revenue From Contracts With Customers” – supersedes virtually all previous revenue recognition guidance in U.S. GAAP and IFRS. It is based on the core principle that a company should recognize revenue in a way that depicts the transfer of promised goods or services to customers in the amount that reflects the consideration the company expects to be entitled to in exchange for the goods or services.

Asset managers will need to evaluate their fee arrangements with hedge funds, private equity funds, and mutual funds under the new rule, which could include: Under the previous rules, companies sometimes could recognize performance-based fees before they actually were realized. Under ASU 2014-09, this will generally not be the case.

Step 1: Identifying contracts with a customer
Any arrangement with a customer (for example, limited partnership agreement, management agreement, or fund prospectus) that creates enforceable rights and obligations will generally represent a contract under the standard.

In addition to identifying contracts, asset managers will need to identify their customer under the contract. The conclusion as to who is the customer can affect the accounting for items such as fees from front-end sales loads and the costs of obtaining the contract.

Depending on the circumstances, an asset manager’s customer could be a fund or an investor. Indicators that the customer is the fund for revenue recognition purposes include:
These characteristics typically are noted in a mutual fund, and, therefore, the customer is generally the fund.

Indicators that the customer is the fund investor include:
These characteristics typically are noted in a private fund, like a private equity or hedge fund, and, therefore, the customer is generally the investor.

If an asset manager enters into two or more contracts with the same customer (or related parties) at or near the same time, ASU 2014-09 requires the contracts be combined and accounted for as a single contract in certain circumstances. An asset manager who provides services to a hedge fund or a private equity fund through a general partner entity and an investment manager may need to combine the general partner and investment management contracts because the contracts will likely have been negotiated together with a single commercial objective. Moreover, the services generally constitute a single performance obligation – management of fund assets.

In the case of mutual funds, the parties can have different contracts for, among other things, advisory services, distribution contracts, transfer agencies, and custodian services. Those contracts generally will not be combined because they have separate commercial objectives, involve separate performance obligations, and lack pricing interdependence.

Step 2: Identifying performance obligations
Asset managers commonly receive two separate forms of compensation in exchange for the single service of managing a fund’s assets, rather than for separate management services and performance-based services. Because asset management services are generally provided continuously over the course of the contract, are substantially the same, and have the same pattern of transfer, all of the services in the contract usually will represent a single performance obligation over a series of service periods (for example, quarters).

Step 3: Determining the transaction price
The standard requires asset managers to estimate the amount of variable consideration they expect to be entitled to and apply a constraint to determine the appropriate transaction price. Due to the constraint, the transaction price generally only will include the periodic management fee at the end of the period when the fee is calculated based on end-of-period net asset value (NAV) and will not include estimates of management fees for future periods, which would be constrained due to their significant variability.

Performance-based fees for hedge funds and private equity funds also come with significant variability, and often must be constrained until they crystallize at the end of the performance period or are no longer subject to a clawback adjustment. Generally, these fees cannot be recognized until it is probable that a significant reversal of the cumulative amount of revenue recognized will not occur. Indicators that a significant fee reversal is not probable may include:
Additional factors could influence the determination of whether a significant reversal is probable, and no single factor is determinative. Substantial judgment based on the particular facts and circumstances is required, and the transaction price must be reassessed at every reporting date, whether quarterly or annual.

Specifically, the asset manager’s variable compensation will generally relate directly to their effort to provide investment management services for a specified period within a contract (a month or a quarter) that are distinct from the services provided in other periods. As such, any variable consideration that is not constrained will generally be allocated to the distinct performance periods, rather than spread across the entire service period.

Step 5: Recognizing revenue when the entity satisfies a performance obligation
Under the new standard, a company must determine whether it satisfies its performance obligations over time or at a point in time and recognize the revenue accordingly. Investment management services are generally satisfied over time because the customer simultaneously receives and consumes the benefits from an asset manager.

The asset manager may choose either an input or output method of measuring progress on each performance obligation. An asset manager that uses the output method may be allowed under the standard to apply a practical expedient that recognizes revenue in the amount that it has a right to invoice. Regardless of the method chosen, asset managers often find that time elapsed provides the best depiction of performance in transferring control of the investment management services to the customer.

Exhibits 1 and 2 illustrate the revenue recognition under the new standard, with examples for private equity and a hedge fund.

Exhibit 1 assumes invested capital of $10 million with annual management fees of 2 percent of ending period invested capital (no fee offsets) payable annually in arrears, and a carried interest of 20 percent (no hurdle rates). Clawback provisions are in effect on the carried interest until the fund is fully wound down. Prior to adopting the new revenue standard, the manager has historically used Method 2 to recognize revenue.

As noted in the table, the management fee during early stages of a private equity fund is billable at 2 percent annually of the fund’s committed capital and is crystallized and recorded by the asset manager at year-end. The hypothetical 20 percent carried interest at year-end is positive for years 2, 3, and 4, but is negative for year 5. Such carried interest would not be recognized under the new standard because of significant variability at the end of each of those years. Even the realized carry at the end of years 3 and 4 will not be recognized as revenue because revenue is still constrained due to clawback provisions. Under the old standard, the manager could have recognized carried interest on an accrual basis without regard to future constraint and clawback provisions (known as Method 2 under legacy guidance). Note that this revenue recognition rule does not affect the corresponding profit allocation at the fund being managed. 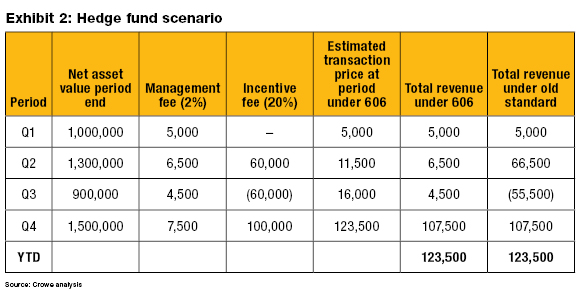 Contract costs
The new standard requires the incremental costs related to obtaining a contract (for example, sales commissions and placement fees) to be capitalized as an asset if the costs are expected to be recovered. For asset managers, costs of obtaining investment management contracts may be capitalizable if the customer is the investor. In contrast, if the fund is the customer, costs of obtaining an investment management contract with the fund may be capitalizable; however, costs incurred to win a specific investor would not be because they were not incurred to obtain the identified customer. Again, judgment and consistency are paramount when determining the customer.

Cost reimbursements
Asset managers must report reimbursements received for costs, either gross or net of the related expenses. ASU 2014-09 provides that a company is a principal, and therefore recognizes reimbursements as gross revenue, if it controls a promised good or service before transferring it to a customer.

In most cases, expense reimbursements will be presented gross because the asset manager will likely control the services being performed (that is, is a principal), whether by performing the services directly or integrating third-party goods and services, such as legal or audit fees, with other services in providing investment management services.

Several other factors might indicate that an asset manager is the principal in regard to expense reimbursement:

Fee waivers and expense reimbursements
Asset managers often waive their management fees, voluntarily or in compliance with the management agreement or side letters with individual investors. They also might be required to reimburse expenses in excess of a certain specified threshold.

If the waiver was agreed to at the same time as the original agreement for the management fee, the asset manager should generally combine the two contracts and record the transaction price net. If the waiver was separately negotiated, the manager may need to consult the contract modification guidance in ASU 2014-09 because the waiver affects the transaction price of the asset management contract.

Generally, fee waivers and excess expense reimbursements must be taken into account when estimating the transaction price for the asset management services and will be subject to the guidance on variable consideration, including application of the constraint. An asset manager should include an estimate of the fee, net of the waiver or reimbursement, in the transaction price if it is probable that doing so will not result in a significant reversal when the uncertainty ultimately is resolved.

Disclosure requirements
ASU 2014-09 also expands the level of disclosure required by asset managers of their revenue recognition policies. Under this new ASU, the disclosures are designed to give the users of the financial statements a clearer understanding of the nature, amount, timing, and uncertainty of the revenue and cash flows recognized from contracts with customers.

To achieve that objective, ASU 2014-09 requires qualitative and quantitative disclosures about the following: While there is no one-size-fits-all approach to providing the required information, what is clear is that the true intention of this ASU is to make the disclosures both relevant and useful to those reading the financial statements.

The future is now
ASU 2014-09 took effect for public business entities last year and for private companies this year. Asset managers cannot afford to ignore the changes to the revenue recognition guidance or to underestimate the time, burden, and expense required to ensure their revenue recognition policies are in accordance with U.S. GAAP.  Further, asset managers should ensure the users of their financial statements understand how the new standard will impact their accounting policies. Those who have not already done so should immediately begin to analyze their contracts to determine how the new standard will apply.