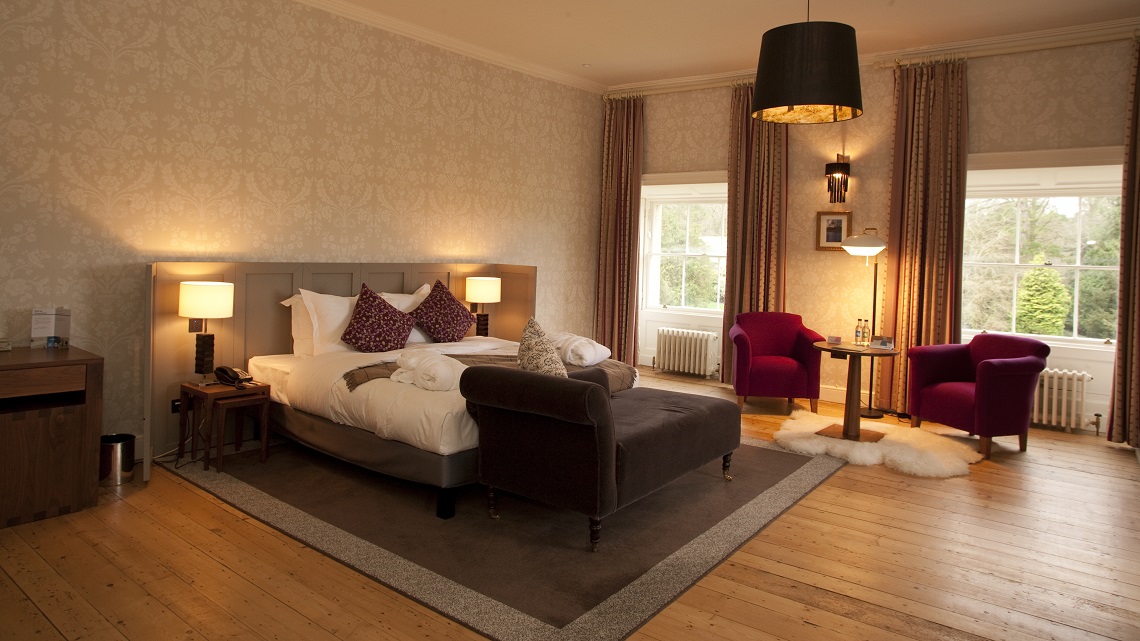 The following is an article which appeared in February 2020 edition of the Business Plus magazine.

Competition is hotting up in the hotel sector, especially in Dublin. In the latter half of the 2010s, hotel operators enjoyed strong growth in revenue and profit, underpinned by buoyant tourism and capacity constraints. Fat margins have attracted new players who see an opportunity, and the result is that room prices have stabilised.

In the capital, hotel openings through 2019 included:

Another new hotel expected to come on-stream shortly is the 140-bed Wren Hotel at the former Andrews Lane Theatre site in D2. The Jury’s Nyx Hotel in Portobello, D8, will be under construction through 2020 while planning has been granted for a new 116-bed hotel at the junction of George’s Quay and Tara Street in D2.

Premier Inn, the Whitbread hotel brand, has been lined up by Glenveagh Properties for a new 250-bed hotel at Castleforbes in the Docklands. Premier Inn has also secured a 97-bed hotel on South Great George’s Street, D2, and a 180-bed hotel on Jervis Street in D1. On the way in 2021 is Marlet’s hotel/aparthotel development on the north quays around the Ha’penny Bridge. The scheme will consist of a 239-bedroom hotel with an entrance on Abbey Street and a 256-bed aparthotel fronting onto Great Strand Street.

According to property consultants CBRE Ireland, c.5,000 new hotel bedrooms are under construction in the capital, of which c.2,200 are due to open for business during 2020. New builds dominate in terms of construction activity, accounting for 70% of the increase in rooms stock.

Accountancy firm Crowe, a specialist for the hotel sector, notes that Ireland’s thirty-six five-star hotels, out of a total of 827 hotels, generate the highest profit per room of any hotel class. Crowe’s analysis shows that profit per room for five-star hotels increased from €20,860 per room in 2015 to €29,060 in 2018. The key driver of this profit growth was average room rate, which inflated from €181 to €228 in the period.

Over the same period, visitors from the US to Ireland soared by 870k to 2.4m. Crowe partner Aiden Murphy believes the significant upgrades and investment in five-star hotels, not just in Dublin but also at properties such as Ashford Castle and Adare Manor, has helped attract higher-spending US tourists.

“This has increased the market share of guests in five-star hotels from 24% to 34% of all rooms sold, as these higher-spending tourists favour premium accommodation and facilities with a higher level of service,” says Murphy. “It appears there is capacity to grow this market further, as connectivity between Ireland and North America keeps expanding.”

Murphy adds that five-star hotels have broadly doubled in value over the last five years. This increase is based on growth in profits and lower investment yields being applied when the outlook looks positive. “The financial and time investment needed to build a new five-star hotel is significant,” Murphy says.

In the 2019 Crowe Ireland Hotel Survey, published in July 2019, the advisers commented that 2018 was a turning point for the industry, with a period of double-digit annual growth coming to an end. Crowe said the sector’s profit growth in 2018 averaged 7%, well down from the 12.5% figure recorded the previous year.

Revenue from rooms and food sales grew at the lowest levels in five years, at 5.9% and 2.6% respectively, highlighting the slowdown in revenue growth as a result of increased competition for restaurant and events customers from non-hotel outlets, and no increase in occupancy levels attained in 2018.

“These findings indicate that it is becoming harder for hotels to increase profit levels despite reasonable revenue growth, as many costs are now increasing faster than the underlying growth in revenues,” says Murphy. The 2018 story was that with limited new supply coming on stream and demand levels remaining strong, the average room rate (ARR) nationally rose 6.3% to €118. The ARR was €146 in Dublin and €94 to €108 elsewhere, and occupancy levels across the sector averaged 75%.

The Crowe report highlighted payroll, utilities and insurance as challenges for the industry, with costs steadily growing higher than revenues. These factors were also evident in 2019, according to the Irish Hotels Federation. At year-end, only one in three members reported a positive outlook for 2020.

Overseas visitor numbers to end November 2019 showed annual growth of 1.5% compared with 5.5% a year earlier. Business levels from the domestic and US markets remain strong, but seven in ten hoteliers saw a drop in business from Britain through 2019, and over half reported a fall in trade from Northern Ireland visitors.

Since 2013, the market share of hotel guests from the UK has dropped by 25%, and the surge in demand from US visitors has balanced this out. This is largely a function of sterling’s weakness against the euro and has most impact on hotels around border counties. Hoteliers also noted a decline in French and German tourists through 2019, though the domestic market was firmer than the year before.

Federation president Michael Lennon commented: “We continue to face high costs of doing business, which have been compounded by the government’s decision to increase the tourism VAT in January 2019. The threat to businesses posed by escalating insurances costs is well documented, and our members are also reporting significant pressure from rising local authority rates.”

The view from AIB is that following many years of substantial growth, there are signs that the environment is a lot more challenging for all the component sectors within the wider hospitality industry. David McCarthy, Head of Hospitality & Tourism, AIB Business Banking, said card spending research shows that the domestic economy accounts for 46% of the overall spend, followed by UK at 24% and North America at 18%.

“While we say that the hospitality sector has enjoyed years of growth, not all areas have benefited,” says McCarthy. “Areas that are much more reliant upon local communities for their business, and which generally have a higher percentage of food and beverage trade than room trade, were slower to recover from the last recession, and therefore have not had the same opportunity to reinvest in their assets.”

McCarthy adds that the Dublin hotel market has had to deal with additional stock in 2018 and 2019, as well as the VAT increase from January 2019. This pressure was reflected in the December 2019 announcement from Dalata Hotel Group plc, the largest hotel operator in Ireland, that the Dublin market in H2 2019 proved more challenging than expected. Revenue per available room, a key performance metric, declined 3.2% for the 11 months to the end of November after a decline of 1.4% in H1.

Crowe’s Aiden Murphy expects that in the coming years regional hotels may see net profit margin decline while Dublin hotels maintain and increase margin. His rationale is that regional hotels have a greater reliance on food and function business, which requires ever more expensive staff and leads to greater insurance risk.

However, some Dublin hotels may have to run faster to stand still too. Murphy estimates that Dublin hotels suffered a €40m revenue loss in 2019 due to the VAT hike from 9% to 13.5% on rooms and food sales. This comes at a time when in just five years the Dublin market will see 6,000 new rooms being added to the stock of 19,000 at the start of 2019.

From 2013 to 2018, supply only increased by 3% while demand was up 13%. In 2018, this resulted in Dublin hotels having over 90% occupancy for at least 140 nights of the year, and upward pressure of rates. “With a 30% supply increase in the 2019 to 2024 period, it is expected that hotels will see occupancy levels dip and greater competition will limit the growth of average room rates,” says Murphy.

For more information about how Crowe’s dedicated hotel, tourism and leisure team can assist you with any hotel or hospitality project, contact Aiden Murphy or any member of our HTL team. 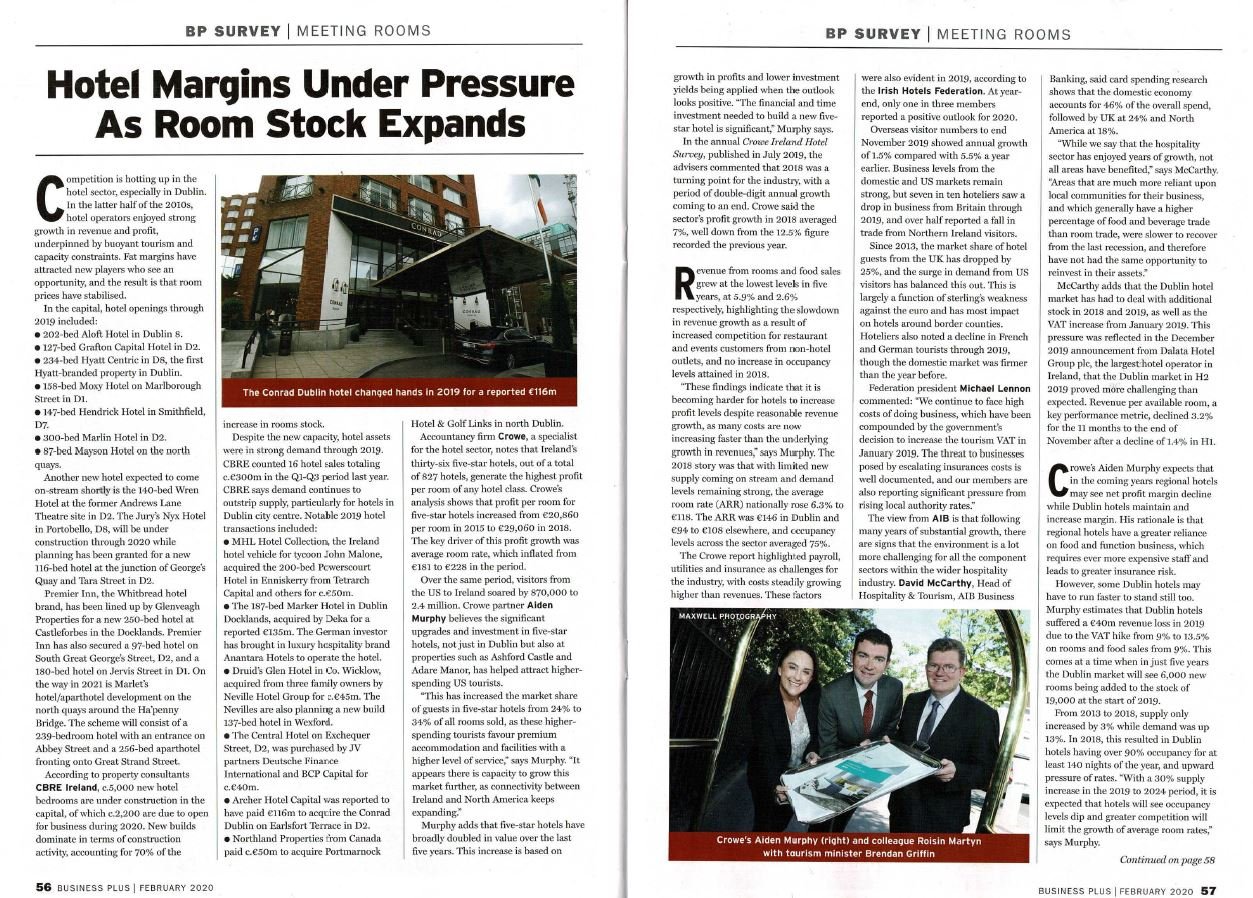