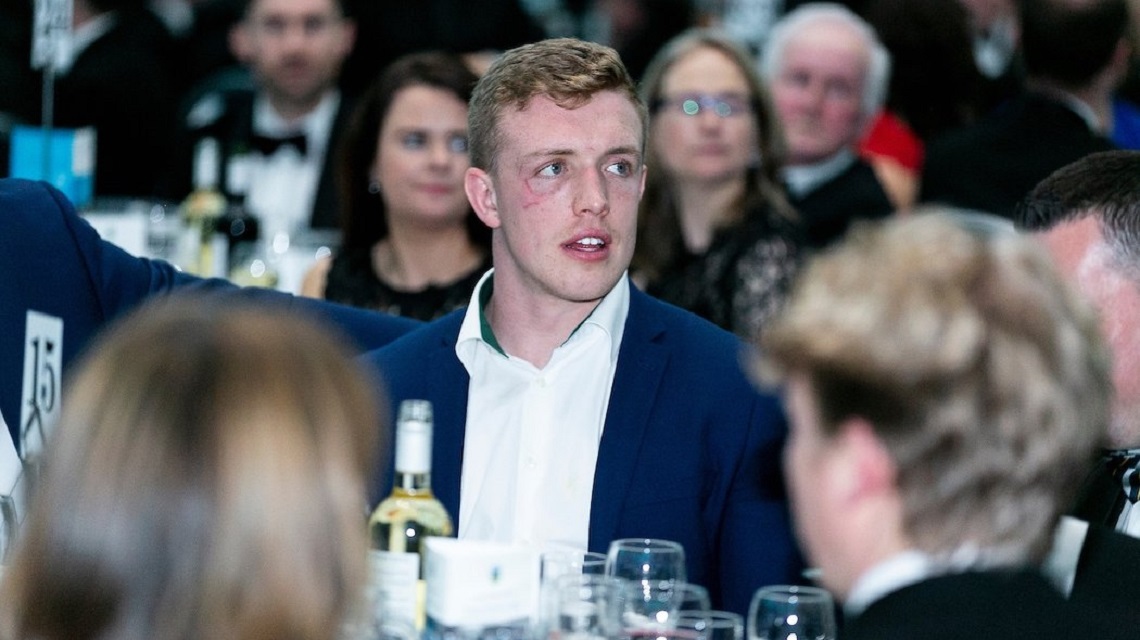 As part of our ongoing commitment to the development of extraordinary talent and to mark our eighth season as official club sponsors of UCD Rugby Club, UCD RFC, Leinster and Ireland star Dan Leavy chats with Crowe trainees to answer their questions on his career journey so far and his leadership insights into operating as part of a high-performance team.

At Crowe, we aim to attract and retain the best people. By creating a high-performance environment, we develop high calibre professionals to provide exceptional client service across audit, tax and business consultancy. Our culture and values make Crowe a dynamic and rewarding place to build a career.

Background
Dan went to St Michael’s College – a school well-known for producing some of the great talent currently in the Irish game. Growing up he played tennis, golf and swimming before deciding in sixth year that rugby could realistically be a career option.

Dan’s younger brother Adam also plays rugby. He is currently part of the Irish Sevens team and was a former member of the Connacht Rugby Academy and played for Landsdowne RFC.

In 2012, his final year at St Michael’s, he captained the winning Senior Cup team, beating Clongowes in the final. 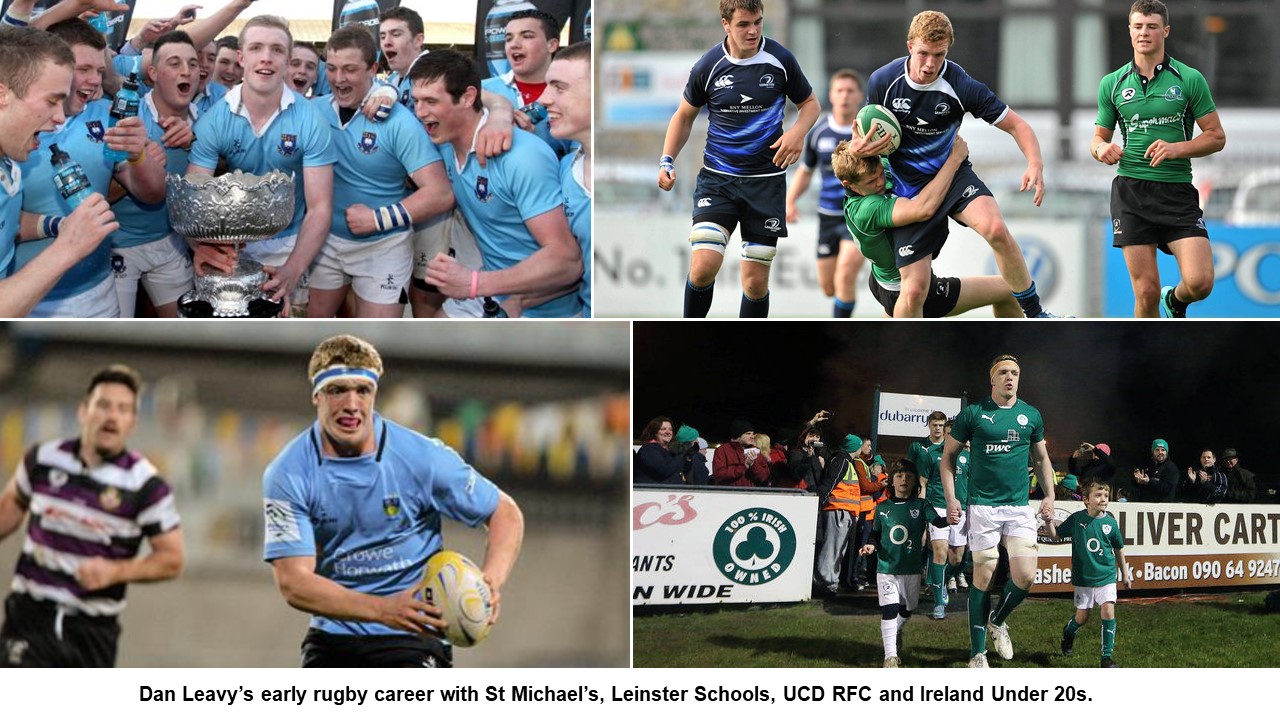 After school, Dan went on to join UCD RFC and made his way to the Leinster Academy before joining the Ireland Under 20s, which he captained for their 2014 Six Nations.

He made his debut for the Leinster senior team in October 2014 and was awarded a senior contract in April 2015. He got his call-up to the Irish squad in November 2016 and made his international debut off the bench against Canada in that autumn series. On 18 March 2017, he was called to the Irish bench for the Six Nations against England after Jamie Heaslip turned his ankle during the warmup.

After an amazing start to his career, winning both a Grand Slam and a Heineken Cup, Dan suffered what can only be described as a horror knee injury against Ulster in March 2019, which meant he missed out on the World Cup in Japan. In fact, it was over 18 months before he would make his return playing for Leinster against Zebre in October 2020. Currently showing some great form, many believe it is only a matter of time before he returns to the Irish squad.

Paul O’Connell recently suggested that if Dan can manage his recovery over the coming months, he believes the openside has the qualities required to tour South Africa as part of Warren Gatland’s squad. “There are certain players who can do certain things, but there are very few that can do it all and he can do it all.”

Q. You are an alumnus of St Michael’s alongside four other players in the current Six Nations squad – James Ryan, Ross Byrne, Ronan Kelleher, Ryan Baird. Prior to 2014 there had only been two alumni of St Michael’s that had been capped – what is the secret formula that has created such a powerhouse?
A. “St Michael’s had not been traditionally known as a strong rugby school, but that all changed when they had a few good teams in the 2005/6 seasons and managed to win the cup in 2007 when I was in first year. That was a turning point as it gave everyone a bit of belief and people saw that winning was achievable.

The school’s success was also down to a number of very strong coaches at the time – Kelvin Leahy, Brian O’Mara, Bernard Jackman, Andy Skehan and Greg McWilliams – some of whom were at UCD as well. They brought an ethos and approach to the sport that was really professional. I look at some of the young players coming through from Michael’s now and there are some really good players coming out of the school. Compared to when I was in sixth year, the level of professionalism and mindset is completely different. It is a testament to the school that young players like Scott Penny and Andy Smith are ready to play for Leinster within a year of leaving.”

Q. Who did you admire as a young player growing up?
A. “There was probably a couple. I used to really like David Pocock, I just thought he was one of the best No. 7s around. Then later on, Richie McCaw was very good, and I loved Sean O’Brien and Jamie Heaslip, which was weird as I ended up playing with them both.”

Q. How daunting was the first time you joined the squad in the dressing room – being part of a team and playing alongside players that you grew up watching.
A. “It was pretty daunting! I actually went straight into the Academy at 18 years old, so just arriving at the building at that age was overwhelming. But the team culture at Leinster is so strong. One of the values is to be humble, treating everyone with respect and greeting new players, so any barriers are quickly broken down and you are integrated into the squad quite fast.”

Q. Did any particular player take you under his wing and show you the ropes?
A. “Ian Madigan used to always give me a lot of advice. He was a good mentor and always looked out for me. Most of the senior players were great, people like Johnny [Sexton] gave me help. Also, Easter [Simon Easterby, forwards coach for Ireland] was always great for insights, he has such an elite mentality towards the game and a growth mindset and that was hugely important for me as a young player coming in.”

Q. Do you have a nickname in the squad?
A. “Leaf probably. To be honest I get a new nickname every week, but Leaf is the one that has stuck the most.”

Q. Ronan O’Gara has said of you, “Dan Leavy has a face you don’t want to argue with. Every crease, crevice, and scar speaks of a personality which doesn’t take a backward step, neither physically or metaphorically.” It is clear that your strength as a player has been your total commitment in the breakdown. How do you balance that ambition and aggression on the pitch with the need to avoid injury and maintain fitness?
A. “Not well is the short answer! I’m playing with fire in my position [as flanker], and I think anyone who’s at the top level is. It is attritional - in a game I will be making 15 or so tackles and carries, plus breakdown and everything else thrown in, so it definitely takes a toll on the body. It is important to recover as best you can and trust in your physical and mental preparation. Hugh Hogan is our breakdown and contact skills coach at Leinster and I do hours of work with him to make sure I am putting myself in safe positions, particularly under fatigue, when people are most likely to get injured.”

Q. You are known to be one of the better game strategists and your preparation for a match is well-documented, where do you get this from?
A. “I just find that the game is a lot easier when you can predict what will happen. If you do your preparation and know an opponent team’s typical plays it is easier to be effective against them. It is very important to study teams you are playing against – it’s a key aspect to training. I really love to encourage young players coming into the squad to sit down in the video room to break down the opposition and see what their trends are. It is good to get a picture in our heads of the players to look out for.”

Q. You played tennis, golf and swimming growing up. Do you keep any of them up?
A. “I am a poor golfer, sink like a stone in the pool and haven’t had a chance to play much tennis. I could see myself returning more to them as I get older but for now, I only really play a bit of golf – although not really committing to it as much as I should.”

Q. You used your rehabilitation time to get some experience working in AerCap aircraft leasing – is that a career you would be interested in post-rugby?
A. “Yes, it was great. I got offered an internship role in there before I got injured but I was in the middle of an important part to the season, so I put it off. Once I got injured, I knew I was going to be out of the game for at least a year so I took them up on the offer and worked every Wednesday in the firm. It is definitely an interesting industry and something I would consider transitioning into.”

Q. You recently invested in Output Sports – a data-driven sports performance wearable sensor. How did that come about?
A. “This was a business opportunity that came my way when I was injured. They have a really good team with an incredible product. It is an industry I really understand, and I could see the value in their offering straight away. They launched at the beginning of the pandemic so the start was slow, but I am delighted to say they are really flying now so it is exciting.”

And finally, some quick-fire questions:

Q. Away games, which stadium has impressed you the most?
A. “Stade de France.”

Q. Non-Irish player you most admire?
A. “Maro Itoje – for durability.”

Q. What song or party piece did you choose to sing as part of your initiation on your first cap?
A. “I was lucky, it was on a day that nine other made their first cap so we all just sang a group song.”

Q. Best and worst roommate to date?
A. “Best – I don’t mind anyone to be honest. Luke McGrath, [James] Tracey… Dev Toner is a very good roommate actually.

Worst – James Ryan. He is always eating and getting room service at all hours.”

The least favourite is missing out on family events or trips because of work.”

Q. What is your guilty pleasure?
A. “I love the film The Greatest Showman!”

Q. What is the most surprising thing people don’t know about you?
A. “I am a big gamer. During rehab Call of Duty got a serious pounding!”

Crowe is proud to be club sponsor of UCD RFC since 2013. The sponsorship is part of Crowe’s ongoing commitment to harness the best young talent in the country both on and off the field through their graduate and sponsorship initiatives

Supporting the development of extraordinary talent: