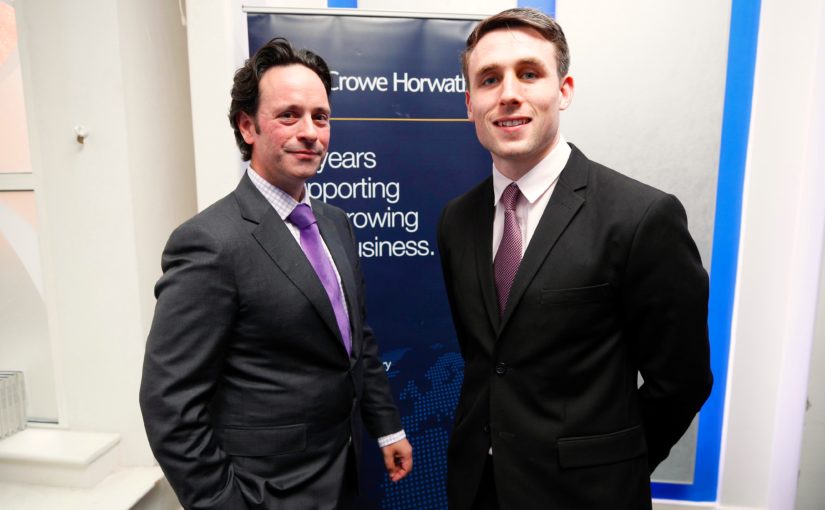 Patrick is currently finishing up a one-year internship with Crowe. A student entering his final year of Business Studies with DCU, Paddy was participating in Crowe’s internship programme with DCU. He plays football for Castlebar Mitchels GAA and has also represented Mayo in the All-Ireland Senior Championship since the age of 20, coming runner up in 2016.

In an interview with Crowe, Patrick reflects on the past year and the challenge of balancing work and his commitment to football.

As a successful player that plays for both club and county, and having both teams achieving considerable success, Patrick has little time for anything else than football. But he loves it. GAA is in his blood after he inherited the passion for the game from his mother, also a former Mayo County player. “Coming from Mayo it would be hard not to have the sport in your blood, we are all football-mad down there.”

Connacht is made up of the five counties – Galway, Leitrim, Mayo, Roscommon and Sligo – and also includes teams from London and New York. The four winners of each province along with the four qualifiers (in the championship if you lose a game you still have an opportunity to progress through the qualifiers – like a back door that gives everyone a second chance) enter the quarter finals.

Mayo reached the All-Ireland final last year, narrowly losing out to Dublin in the replay after the first meeting ended in a draw. The two teams that get to the All-Ireland final each year get a team holiday, so Patrick got to enjoy a wonderful break in South Africa after last season, a small consolation prize for losing out on his dream of lifting the trophy.

After the All-Irelands you go back into club championships (both within your county and your province) which, if your team is successful, can carry on as late as St Patricks Day the following year! As Patrick says, “It is an almost continuous cycle if your club and county are successful, which leaves little downtime – both mentally and physically. But you get caught up in it and in the routine. It can be harder on your club team mates who often have to put their season (and their family life) on hold while they wait for you to complete your All-Ireland campaign.”

So Patrick faces a busy schedule each year (and that doesn’t even take into account playing for his university – which he did last year!). But, if his year looks busy, his week is positively frenetic!

The weekly regime
A typical week for Patrick involves splitting his time between his work and study base in Dublin and his family base in Mayo. He will drive up and down three times a week, spending as much as 20 hours in the car.

Work / life balance and friendships
“Sometimes you don’t feel like going out on Friday after training, as it is late and you are tired after a busy week. If you have a home game on Saturday, there is opportunity to join friends afterwards. But if there is a big game coming up, you might want to meet up with team mates to discuss it.”

Patrick admits that with the travel it can be hard to manage everything and still get your eight hours sleep per night – “On training days you can’t get a full night’s sleep and the other days are often a case of playing catch up.”

Patrick admits his friends are very understanding – “There has been many a wedding and social gathering that I have missed” – but they understand his passion and commitment to the sport. And there is little by the way of negative peer pressure if his friends are out going to pubs and clubs.

Naturally, through the intensive nature of elite team sports, he has developed a close comradery with his team mates, and spends a lot of down time with them. The relationships developed with team mates have a very different energy to his other friendships. “With team mates, in the heat of the moment, emotions can run high but equally forgotten as quickly. Playing football, you can experience such highs and lows – a complete mix of emotions – so you need to manage that and check yourself when off the field.”

Sports nutrition
Nutrition has become a major part of a sports person’s daily routine. Patrick follows a strict regime, which is devised with the team’s nutritionist and tailored to each player’s requirements and preferences. On training days for lunch he will load up on carbs – eating double a normal day’s portion for energy – which will be burnt off that evening. His diet will also contain a lot of protein to help repair and maintain muscle mass.

Mental mind-set
Patrick puts his success down to:

“You have to give it your all, no point in half doing it.”

“It can be hard losing big matches but, because football moves on so fast, there is little time to dwell on failures. In fact, there is little time to enjoy success either! It is important to moderate your emotions to avoid major highs and lows that every season will bring. But if you have had a bad game your team mates tend to rally around you to help you get back into a good head space.”

His ambition to win and realise his potential as a sportsman are key motivating factors for Patrick. But it is the passion he has for his sport that makes the sacrifices seem small. He has more to learn and give and feels he is far from reaching his potential, “I hope to continue to grow and improve as I work on my game and continue to gain exposure at this level.”

His ambition is to win an All-Ireland medal. Sport will remain his main focus for now, but he knows there is life after football although he hasn’t fully considered what he will do. While only 22 he can still look forward to another 8-10 years playing at the highest level.

Life after sport
After his stint with Crowe he could see himself pursuing a career in corporate finance but would need to consider closely where he bases himself. “The last year has been challenging – with so much time on the road. I have really enjoyed my time with Crowe, but I am not sure yet on what path I will pursue. I am also interested in sports psychology, so want to explore my options.” When his playing career finishes he could see himself staying involved in the sport – perhaps in a coaching role.

The similarities between sport and work
“Mentally and physical you need to be fit, to prepare for the bigger environments like a final in Croke Park. It’s no different to business – you need to do your preparation before a big meeting or presentation as you would before a game. Preparation is the key – it brings its own confident when you know you are on top of something.”

Best of luck Paddy with the rest of the season and your studies. Keep in touch!