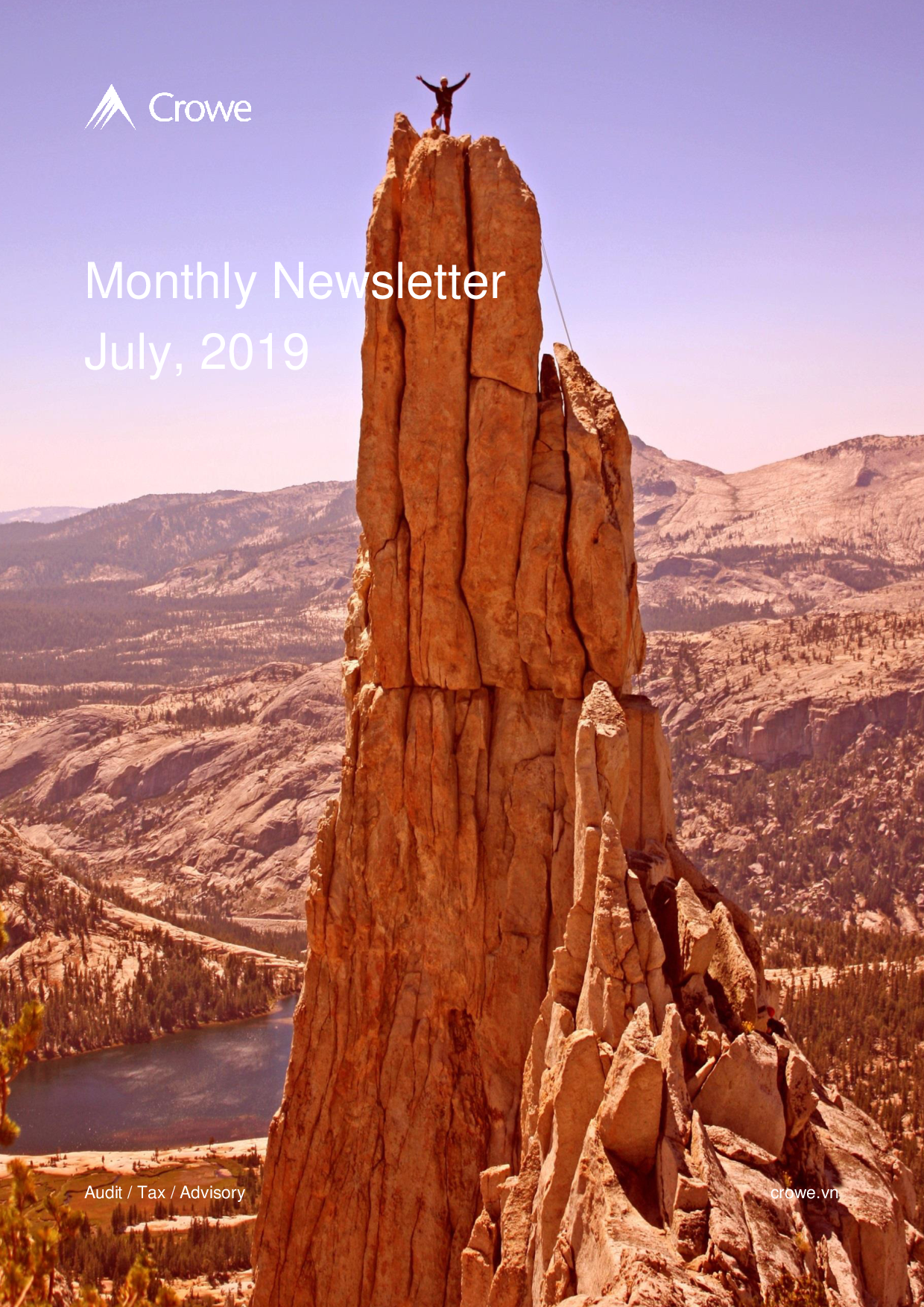 Fees incurred from facility agreement with an international element

On February 13, 2019, the General Department of Taxation issued the Official Letter No. 474/TCT-HTQT guiding on the tax liability for fees incurred from facility agreement with an international element.

In case a Company in Vietnam enters into a facility agreement with a foreign country (Korea), pursuant to the provision of the Double Taxation Agreement between Vietnam and Korea, the incurred fees are guided as follows:

The condition for making provision for bad debts before maturity

On March 13, 2019, the General Department of Taxation issued the Official Letter no. 811/TCT-DCN  guiding on making provisions for the losses becoming doubtful debts.

Receivables having yet to mature are determined as doubtful debts when an economic entity (company, private enterprise, co-operative society, credit institution, etc.) goes bankrupt or is in the process of dissolution, or debtors are missing, fleeing, being prosecuted, detained or tried by law enforcement agencies, serving sentences or dead.

If a doubtful debt is determined to make a provision based on the Criminal first-instance judgment which has yet to take its legal effect, the legal basis in that case shall not be considered adequate.

On May 22nd, 2019, the Ministry of Finance issued the Official Letter No. 5845/BTC-TCHQ addressing matters regarding the imposition of taxes on scrap and obsolete products from production of export goods for domestic consumption. Accordingly,

For scrap and obsolete products generated from the production of exports for domestic consumption, enterprises that have made the value-added tax (VAT) and excise tax returns (if any) with tax authorities are not required to make returns and adjustments with customs authorities.

Regarding the settlement of the management and use of imported materials, supplies and components for the production of exports under the Customs Law, enterprises shall provide customs authorities with the declarations of scrap and obsolete products and tax payment documents with tax authorities for liquidity procedures.

Enterprises which have not fulfilled their VAT and excise tax return and payment obligations (if any) to tax authorities in this period are required to provide customs authorities with tax returns and payments as per Clause 49, Article 1, Circular No. 39/2018/TT-BTC.

Scrap and obsolete products generated from the production of exports for domestic sale and consumption are entitled to import tax exemption, provided that returns on and payments of value-added, excise and environmental protection taxes (if any) must be made to customs authorities via the system with information specified in the Form No. 04 in Appendix IIa to this Circular. In the case of paper documents, the form No. 06/BKKTT/TXNK in Appendix VI to the Circular No. 39/2018/TT-BTC should be used.

The disposal of scrap and waste must comply with the Environmental Protection Law and be recorded in details for customs authorities’ inspection purposes.

Dates of Preparation and Approval of Electronic Invoices

On March 13th, 2019, the General Department of Taxation issued the Official Letter No. 812/TCT-DNL providing guidance on the dates of preparation and approval of electronic invoices upon application of the Circular No. 32/2011/TT-BTC.

For businesses with sales activities continuously in all the day and night, if there are electronic invoices with the approval dates following the invoice dates as a result of the sellers’ delivery of invoices to buyers before 24:00 (the previous day) and buyers' return of those with both buyers’ and sellers’ digital signatures through the intermediary electronic invoice solution provider's system after 00:00 (the next day), the preparation dates of the relevant electronic invoices shall be relied on for the purpose of determining the enterprises’ prescribed tax return, payment and accounting obligations.

Double Taxation Agreement for Expats at Representative Offices in Vietnam

Accordingly, the income of an expat from his/her employment at the representative office shall be subject to the personal income tax (PIT) only in the Other Contracting State (Vietnam’s PIT exemption) if all following three conditions are satisfied:

a. The recipient is present in the Other Contracting State for a period or multiple periods of total 183 days or less during the relevant fiscal year;

>> If the expat is present in Vietnam for less than 183 days during 12 months beginning or ending in the tax year, this condition will be met.

b. The employer or the employer’s representative who pays the expat is not a resident in the Other Contracting State;

>> In case the expat enters an employment contract directly with the Parent Company in the Other Contracting State and works in Vietnam as appointed by such Parent Company, the expat shall act for the operation of the Representative Office, which assumes the responsibilities for and the risks to the expat’s performance during its operation, reverses the right to his/her products and services, provides working facilities and places, and pays the expat’s wages. Hence, the Representative Office is considered the true employer of such expat.

>> In case of the Representative Office’s involvement in the Parent Company’s business chain activities which are not of preparatory and auxiliary nature, but contributes to the Parent Company’s profitability such as negotiation, contract conclusion, marketing, advertising, sales support, service provision, after-sales and so on, the condition (c) above is not satisfied because the Parent Company has had a permanent establishment in Vietnam to carry out all or part of its business.

If all three conditions are not satisfied, the expat shall be subject to Vietnam’s PIT return and payment under the applicable PIT Law and guiding documents.