We summarized below some of the major tax law changes for 2012.

(Note) Local income tax will be additionally imposed at 10% of the corporate tax liability.

The National Assembly of Korea passed the proposed tax law changes which will maintain the top corporate tax rate at 22% for the company whose tax base is over 20 billion Won, and create a middle range tax bracket for the company whose tax base is between 200 million and 20 billion Won. The company with tax base up to 200 million Won will continuously remain at the 10% corporate tax rate. These changes made for improvement of fiscal stability and for development of small and medium-sized businesses are effective from the fiscal year starting on or after January 1, 2012.

In order to secure submission obligation of the shareholders’ list at the time of establishing a company, a new penalty clause has been introduced under which a penalty on non-submission will be imposed at a rate of 0.5% on the total amount of shares owned by each shareholder at issue.

The regulation is effective from the fiscal year starting on or after January 1, 2012.

The regulation will be effective for the payment to be made on or after July 1, 2012.

(Note) The severance pay liability for the service years before January 1, 2012 can be accrued in accordance with previous rules (without limitation in accordance with the company’s regulation prescribed in the Articles of Incorporation or approved by the shareholders’ meeting).

Excess severance pay over the limitation will be classified as wage and salary income, which may be subject to higher income tax rates.

The amended individual income tax rate brackets are as follows: 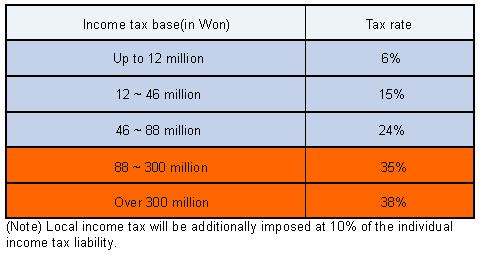 In case a non-resident applies a reduced withholding tax rate(s) allowed to the beneficial owner under the relevant tax treaty, he/she is now, same as a foreign company, required to submit a withholding application form to the withholding agent paying the income.

The regulation will be effective for the payment to be made on or after July 1, 2012.

The above revisions are effective from the quarter starting on or after January 1, 2012.