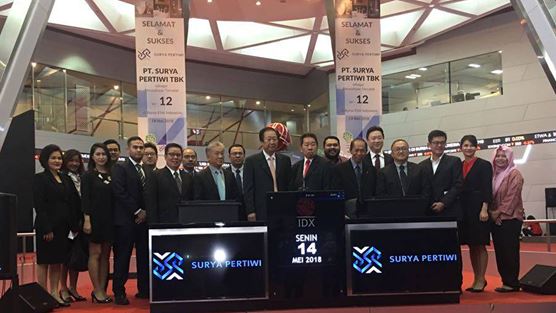 PT Surya Pertiwi Official listing of Shares on the IDX

In addition to the Indonesian Offering, the Company’s shares is also offered internationally through private placement of shares to eligible investors resident outside of the Republic of Indonesia and outside the United States. For this offering, Ciptadana Sekuritas Asia acted as “Domestic Underwriter”, while Credit Suisse as “Joint Global Coordinators”.

PT Surya Pertiwi which was established in 1978 engages in the trade of sanitary wares and bathroom fittings and is the sole distributor of TOTO products in Indonesia.

As the reporting accountants, our audit engagement Partners, Mr. Nunu Nurdiyaman and Mr. Jenly Hendrawan (fifth and fourth from the right)  attended the initial listing ceremony. Standing at the right side of Mr. Nurdiyaman were Mr. Tjahjono Alim and Mr. Efendy Gojali, President Director and Deputy to President Director of PT Surya Pertiwi Tbk.