It is always in the taxpayer’s best interests to contact HMRC voluntarily. 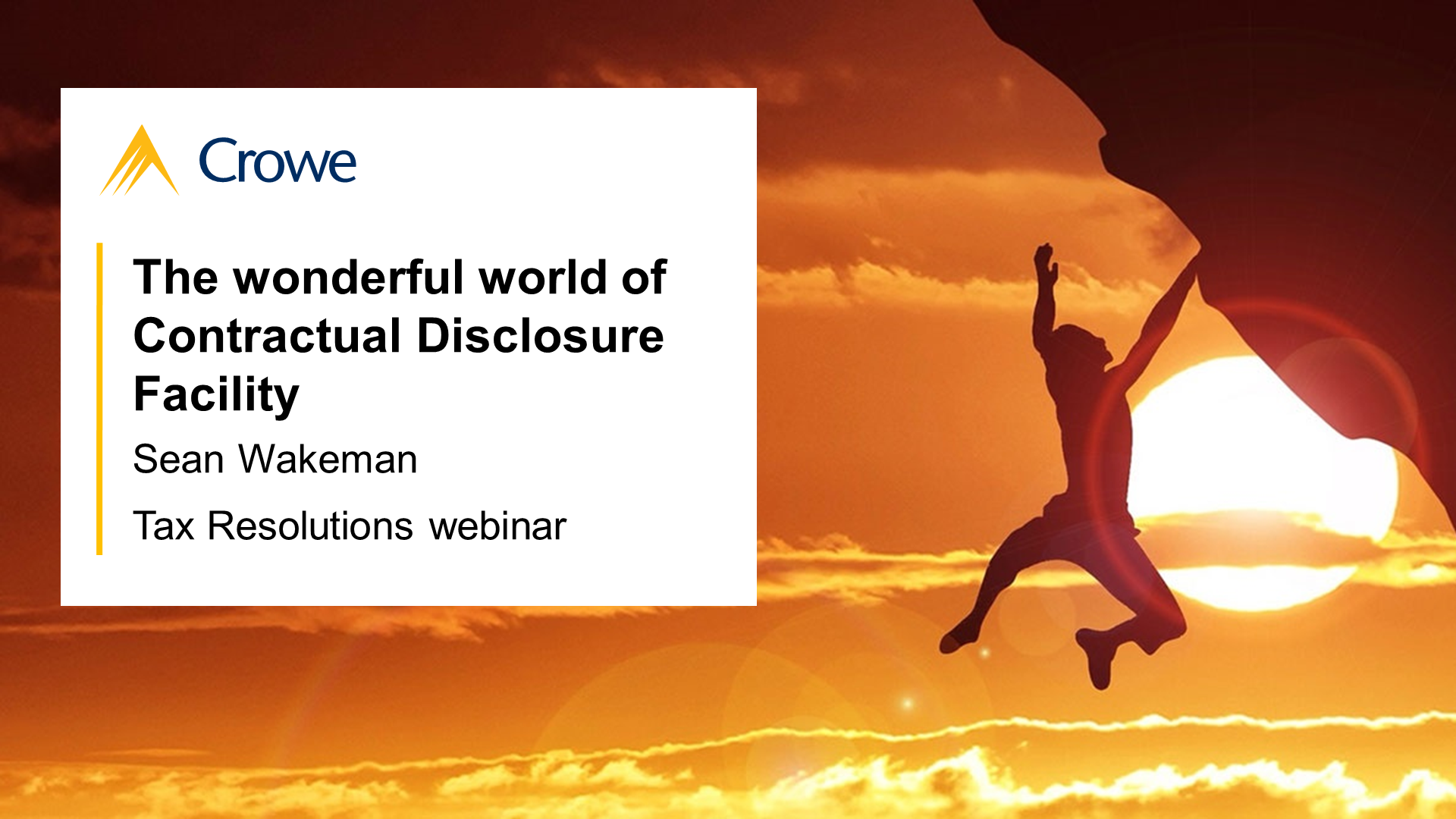 Contractual Disclosure Facility (CDF) is increasingly being used by HMRC when they suspect a taxpayer of tax fraud.

Join our National Head of Tax Resolutions, Sean Wakeman in his informative webinar on the ‘Wonderful world of CDF’

Any tax investigation or disclosure is sensitive and complex. Advice from our award-winning, specialist team will help your client navigate through the Contractual Disclosure Facility (CDF) process and achieve a positive outcome.

Every case is unique, sometimes requiring a robust stance to be taken with HMRC, sometimes needing a practical solution, at other times a discreet discussion. We take time to explain and clarify complex issues so that clients are kept fully informed throughout the CDF process. Our specialists ensure that the right amount of tax, if any, is paid in settlement.

We have an excellent working relationship with HMRC’s fraud investigation teams and meet senior personnel to discuss practical and technical issues.

We are represented on important committees, such as Compliance and Investigations Committee at the ICAEW and the Chartered Institute of Taxation’s Management of Taxes Committee.

To achieve the best outcomes for our clients, we work closely with other professionals, including accountants, lawyers, fiduciaries and bankers. We can work independently of existing advisors, or in a peer capacity in the background.

HMRC prefers to deal with cases of suspected tax fraud through the CDF in accordance with the procedures set out in the department’s Code of Practice 9 (COP9) booklet. Under this procedure, the recipient of COP9 is given the opportunity to make a complete and accurate disclosure of all their deliberate (and non-deliberate) conduct that has led to irregularities in their tax affairs. The quid pro quo is that HMRC will not pursue a criminal investigation with a view to prosecution if a full disclosure of any deliberate conduct is made. If the taxpayer co-operates fully, he or she will also achieve a greater reduction in any penalty found to be due and can avoid other sanctions such as the publication of their name by HMRC.

Under the CDF, taxpayers suspected of tax fraud initially have 60 days to agree to the facility’s terms and provide an ‘outline disclosure’ or deny any tax fraud has been committed. If no response is received within the 60-day period, HMRC will treat this as a conscious decision not to admit fraud or to co-operate. In order to avoid the risk of the individual trying to narrow the focus of the disclosure, HMRC will not usually say what its suspicions are or enter into any discussion until either the taxpayer has responded or the 60-day response period has expired.

Whilst the outline disclosure is not expected to contain precise details of all irregularities, it needs to be more detailed than merely a basic outline. The description needs to set out sufficient information for each separate tax loss brought about by deliberate conduct including, but not limited to:

In most cases HMRC will then ask taxpayers to attend a meeting to learn more about their personal, business and financial history. HMRC views attendance and full co-operation at these meetings as a strong indication of engagement with the process, which will help to reduce the level of any penalty that may ultimately be due. HMRC will then discuss the scope of the formal disclosure report with any appointed adviser so it is clear what needs to be done.

HMRC will also look to agree a timetable for completion of the disclosure report. The time needed will depend on the circumstances of the case and will vary according to, for example, the complexity of the work needed and ease of access to historical data. HMRC will expect to be kept informed of progress with the report at regular intervals, which may involve regular meetings with the adviser and, if HMRC considers that adequate progress is not being made, they may decide to take over the investigation.

The formal disclosure should include full and precise details of the deliberate conduct, in whatever capacity the taxpayer acted (for example as a sole trader, director, partner, executor or trustee) and will normally contain:

The taxpayer will also be expected to certify that the report has been adopted as correct and complete.

If the taxpayer does not co-operate, HMRC may take over the investigation which may ultimately lead to a criminal investigation and requests for information about his or her financial and business affairs from third parties, which could be damaging if customers, suppliers and other business contacts are approached.

As the name suggests, the CDF is a contract. To comply with their part of the contract, taxpayers usually need to complete the two disclosure stages noted above, being the initial outline disclosure followed later by a much more detailed formal disclosure together with a certified statement that it is a full, complete and accurate disclosure along with certified statements of assets, liabilities, bank accounts and credit cards operated at dates the adviser agrees with HMRC. This is the only way to be certain that HMRC will not carry out a criminal investigation into the suspected tax frauds.

HMRC’s part of the contract is that, in exchange for the full disclosure of all irregularities, HMRC will not pursue a criminal investigation into the conduct disclosed. Anything omitted from the outline disclosure, or an invalid outline disclosure, leaves the taxpayer vulnerable. The same applies where HMRC believes that a false statement has been made, false documents have been submitted or the formal disclosure report or certificates are incorrect or incomplete.

If a valid disclosure is made, HMRC will look to conclude the investigation without unnecessary delay. The taxpayer will be invited to make a financial offer to cover the tax, interest and appropriate penalties to settle the investigation.

Taxpayers who genuinely do not believe that a loss of tax has been brought about through their deliberate conduct should not agree to the CDF as a matter of convenience, it is strictly for fraud only. In these circumstances taxpayers can sign and return the CDF rejection letter within 60 days. HMRC will then start its own investigation and reserves the right to escalate it to a criminal investigation.

The CDF or Code of Practice 9 is complex and far from routine. It involves admitting that tax has been lost because of deliberate conduct and means HMRC may be able to seek recovery of the tax, interest and associated penalties as far back as 20 years. A specially trained HMRC officer will handle the investigation and HMRC strongly advises taxpayers to seek independent professional advice from a specialist adviser who is familiar with COP9.

The risk of HMRC discovering inadequacies is growing as its data-gathering techniques grow ever more sophisticated. This is evident from the increasing amount of data automatically exchanged cross border between tax authorities, the use of the hugely sophisticated 'Connect' analytical computer system, and deployment of extra investigations staff. Anyone with tax irregularities that have been deliberately brought about should seek specialist help as a matter of priority. In these circumstances, COP 9 and the CDF is a good place to be, compared to the alternative!

Convictions give corporate facilitation of tax evasion warning to firms
Firms can incur criminal liability unless action is taken to ensure that the risks are identified and addressed accordingly.