Law Firm Benchmarking: What lies ahead?

It has been yet another challenging year for all law firms, but the need for clear horizon scanning and risk management strategies remains as important as ever. Firms are still placing importance on their approach to staffing, but the emergence of artificial intelligence and the persistent uncertainty around Brexit is encouraging many to reassess their next steps.

Last year, we saw regional firms place a higher emphasis than their City counterparts on recruiting and retaining high quality people. This year both City and regional firms are prioritising attracting and retaining top talent and cited offering clear progression and a market competitive remuneration package as two of the top factors for recruiting high quality staff.

However, it is not just the tangible benefits that attract talent; in a market where staff like to retain fluidity with their career prospects, the importance of being associated with a well-regarded firm is strong. Firm reputation remains a priority for all with every participant identifying this as a key factor in attracting new recruits.

Brexit remains a cause of concern for the industry with City firms being the most cautious of the potential outcome. 50% of City participants have not changed their view that Brexit represents a threat to their business, and only 6% view it as offering positive opportunities.

Regional firms are still relatively benign on the subject compared to their City counterparts, though a greater proportion are starting to become more nervous, with 20% of regional firms feeling that the business threat level has increased since last year.

Last year we noted that over a quarter of regional firms had not yet assessed the likely effect that Brexit would have on their business and were operating a ‘business-as-usual’ approach until the terms were agreed.

Unfortunately, uncertainty remains a key word among all our participants this year with many firms simply ‘hoping for the best’ and focusing on day-to-day operations due to the delays in Brexit negotiations.

The question for those firms taking a ‘wait and see’ approach is whether they will have sufficient resources and agility to take advantage of opportunities that arise or, indeed, be able to take decisive action to counter the threats that may follow.

When facing all of these external challenges, it might be easy for firms to forget the need to monitor their internal operations, and so it is encouraging that the majority view pricing as being a critical success factor.

Almost 80% of City firms and 72% of regional firms cited pricing transparency as a critical success factor over the next few years and the SRA has made it very clear that open and transparent pricing policies will be an area of focus over the coming years.

It is not just the importance of getting the level of price correct to ensure sustainable profits, but also the need for transparency that is key here. The risk of getting this wrong, and appearing to be uncompetitive, cannot be understated.

Most City and regional firms have made some changes to their pricing approach over recent years, though change has been moderate rather than transformational.

In any case, those that have not changed their approach, or have not thought about it at all, are in a clear minority.

A key factor that has gained momentum over recent months is the emergence of AI as a force for change in the industry, and this year we asked firms for their view.

Both regional and City firms were united in their views, with the majority seeing the benefits of automation as providing a way to streamline their less technical operational areas. A flow of higher quality operational data will help firms to focus on developing their core business, while also remaining competitive and financially stable. It is also encouraging to see a number of firms, especially from the regions, being proactive and taking steps now to put themselves at the front of the pack

Although AI may be seen as a playground for the bigger firms (including all professional services firms), smaller businesses that can understand the potential now, will position themselves favourably in the market going forward.

Last year, the threat to market share from other non-lawyer firms, was seen as a significant consideration for both City and regional firms. Indeed, we are already seeing accountancy firms making moves in this area.

It is therefore not surprising that the majority of City firms view the threat of non-lawyer firms as having increased over the past 12 months, though most to a relatively moderate degree. Given that the threat of ‘supermarket law firms’ didn’t really materialise to the extent that many feared, perhaps firms are feeling more able to compete against new business models, indeed, the regional firms remain less wary. Time will tell, but we are seeing an increasing appetite for other professional firms to dip their toes in the water. 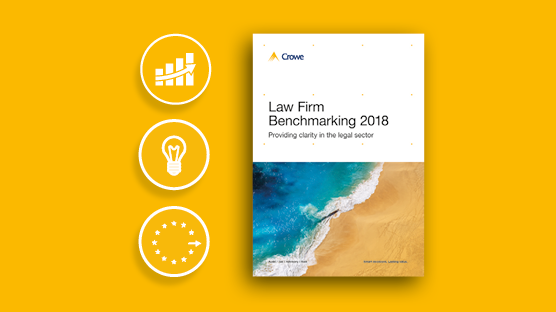 Law Firm Benchmarking: Regional view
28% reported growth levels of more than 10% and a 50% saw a decrease in PII costs.