According to the latest HMRC statistics (issued October 2019), some innovative manufacturers have been able to claim cash from HMRC twice over. Firstly, from R&D tax credits and secondly from patent box reliefs.

R&D tax benefits are available on costs incurred during the development and testing phases of projects to develop new, or improved, products or processes.

For profitable SME companies, this is equivalent to an additional 24.7% reduction in tax liability over and above the 19% normally available i.e. a £43.70 reduction in tax liability for every £100 of R&D spend. Where a company does not pay any tax, either because it is loss making or a pre-revenue start-up, it can still benefit from making an R&D claim by cashing in its R&D tax losses at up to £33.35 for every £100 of R&D spend. So making an R&D claim can improve a company’s cash flow whether or not it is making profits or losses.

Despite the benefits, HMRCs latest statistics indicate that there is still only about 1% of all active companies claiming R&D cash tax credits, with companies in the manufacturing sector making up approximately 25% of the total.

Our experience is that most manufacturers have to continually invest in new technologies in order to retain a competitive edge and thrive, and many rely on their annual R&D cash injection to finance this investment.

With the average R&D claim being worth around £50,000 of cash, and as a firm, Crowe’s clients receiving on average just under £70,000 per R&D claim, why is there still a sizable number of manufacturers that have not made an R&D claim?

The main barrier appears to be lack of awareness. As a rough rule of thumb, if a business is spending money on developing new, or improved products, or processes, including manufacturing processes, and there are technological challenges and uncertainties to be overcome, it is likely to be entitled to R&D tax benefits.

The Queen’s speech confirmed the Conservative’s manifesto proposal to increase the R&D tax credit from 12% to 13% for Large companies.

This is to be welcomed, especially given the fact that under the Labour manifesto the Large company R&D tax incentive would have been phased out. There are no plans to make any changes to the SME R&D scheme.

The net cash benefit of the proposed Large company increase is £10.53 for every £100 of R&D spend, which is only £0.81 (for every £100 of R&D spend) more than under the current regime. Given the fact that HMRCs latest R&D statistics (issued in October 2019) indicate that so far in 2017-18 only 6,555 companies have claimed R&D tax credits under the Large company scheme, the net impact of the proposed change is likely to be of limited value to a very small number of companies. 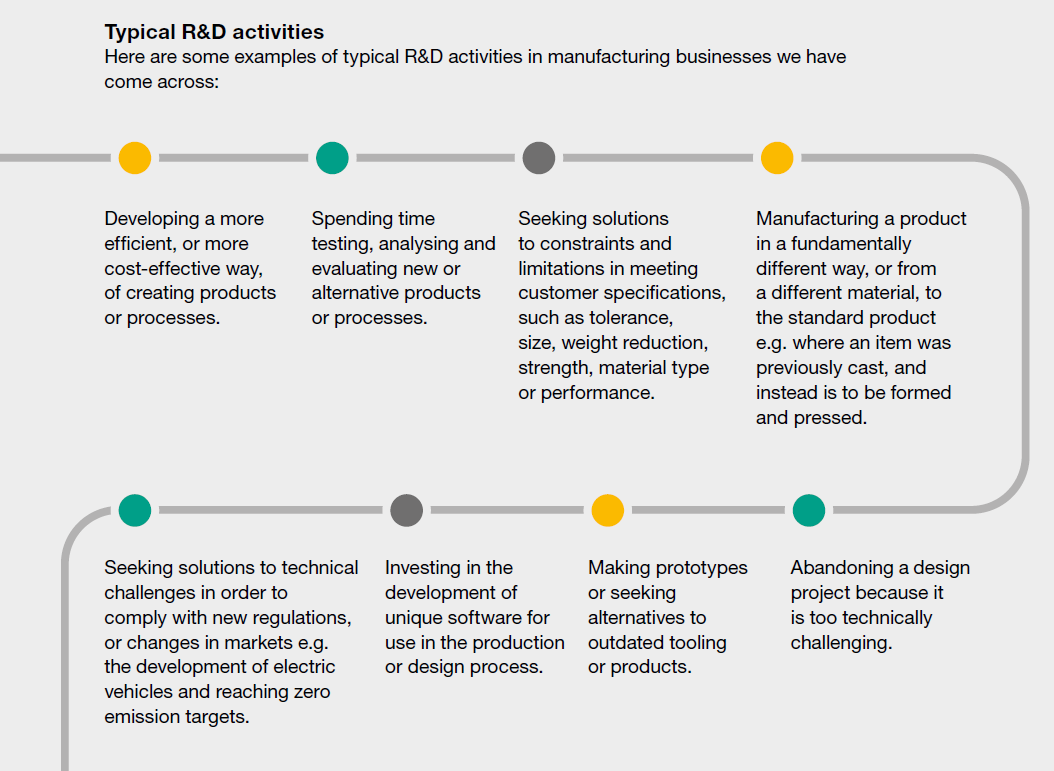 In contrast to R&D tax benefits, which are claimed on a project by project basis, patent box benefits are available for the whole of the life of the patent, which could be up to 20 years.

Patent box relief is not available on the profits of products that are simply bought and sold, it is only available where a product has been substantially developed, and then patented, by the company. Under the patent box, patent box profits are subject to a 10% tax rate, which is a hefty 9% discount on the main rate of tax (currently 19%).

Despite the tax advantages, there are many reasons why businesses choose not to patent products they have developed. The main reason cited is that once a product is patented, its details are within the public domain. Even though there are protections in place to prevent infringement of patents, many businesses are wary of the impact of disclosing too much information for fear that their product can be more easily copied.

HMRC’s latest statistics (issued October 2019) bear out the above reservations with only just over 1,000 companies claiming patent box benefits in the last year. However, it is interesting to note that 50% of these companies are manufacturers.

Despite the poor uptake, our experience is that for those who can claim patent box relief, the tax savings over the life of the patent can be significant.

Given the fact that survival of many businesses is dependent on having a good cash flow, if your company is innovative, it is always worth checking to see if it can benefit from the free cash available by claiming either, or both, R&D or patent box benefits.

R&D tax credit figures
Analysis of the recent research and development statistics, which indicate a positive outlook for business innovation in the UK.

Concerns for the future of Entrepreneurs’ Relief
Act now before the Budget announcement on 11 March 2020.