In recent years the Family Investment Company (FIC) has become the vehicle of choice for the High Net Worth Individual as a useful tool for tax and succession planning. The traditional Trust is still popular and very much has its place in terms of wealth protection for future generations, UK corporation tax is currently set at one of the lowest rates in the G20 at 19% and therefore despite the recent scrutiny from HMRC, the FIC is likely to remain a popular alternative for a while longer yet.

What is a FIC?

A family investment company (FIC) is a company that invests rather than trades. The investments are typically equity portfolios or property.

The FIC is set up by the founder transferring cash or assets usually by way of a loan. Any profits arising from the investments are taxed at corporation tax rates rather than income or capital gains. This can create a tax saving of over 25% for an individual paying tax at additional rates.

The structure also offers Inheritance Tax (IHT) advantages and is therefore an attractive alternative to a Trust, particularly with entrepreneurial clients who are more familiar and comfortable with a company structure rather than a Trust.

How is a FIC set up?

Usually a FIC is set up with a founder share held by the individual providing the capital, either by a cash loan or by transferring assets in to the company. Transferring assets can have separate tax consequences particularly around capital gains tax or in the case of property Stamp Duty Land Tax. These costs can render the creation of the FIC structure prohibitive. However at the time of writing we are in a position where for many asset values have fallen dramatically and the tax charges that may have been prevented the transfer of assets may not now be in point. Now may therefore be a good time to think about restructuring the family wealth.

On creation, other family members and often family trusts are brought in as shareholders. Different classes of share are issued to enable flexibility around payment of dividends. It is also possible to capitalise debt creating redeemable preference shares to extract capital at no cost.

The founder shareholder generally maintains control over the investments (or is responsible for appointing an adviser) and the payment of dividends. The Articles of Association and the shareholders agreement can be drafted to protect the shares from sale outside of the family, making this type of structure more effective in a divorce.

Profits arising within in the FIC are chargeable to corporation tax, currently 19%. In addition where the FIC holds an equity portfolio there may be no tax at all as dividend payments are often tax free from company to company. This can increase the return on the investment significantly.

FIC’s are not just used for equity investments, since the tax rules for residential property have changed in recent years more investors are using a corporate structure to house their property portfolios. Again the rental profits in the company are taxed at preferential corporate rates and companies still have the ability to deduct any loan interest from the rental income which is now being restricted for personal investors.

The investment is typically made by way of a loan and this can be repaid from profits tax free. It should be noted that HMRC have been known to challenge the tax treatment of repayments of interest free loans. In our view assigning part of the loan to the other shareholders and potentially capitalising the debt can prevent this.

We understand the interest free loan point is one of the issues that HMRC have been considering as part of their recently created ‘secret unit’ to review the tax position with regard to FIC’s. They have concerns that FIC’s are taxed too leniently and may take steps to change this in the future. At the time of writing however no changes have been made.

The company wrapper shelters the investments from income tax until the funds are extracted from the company. When profits are extracted the shareholders will be liable to income tax on any amounts received. Payments are usually made by way of dividend and are subject to rates as outlined below.

The FIC is created to benefit the family and as such parents and children are generally included as shareholders. It is also possible and can be beneficial to include a trust as a shareholder to offer more flexibility.

Dividends paid to minor children are taxed on the parents. However, for children over 18, payment of a dividend up to the basic rate band can be a very efficient way of extracting funds to help with costs such as university fees.

It is not generally beneficial to pay dividends to the founder shareholders as their income levels are usually high. The combined tax rate of the company and the income tax would be higher than if the asset was held directly.

The FIC structure is of most benefit where the capital and income can be retained within the company for long periods, or indeed used as a structure to pass on to the next generation in the same way one would use a trust.

As with income tax, any assets sold within the company would be charged at corporation tax rates rather than Capital Gains Tax (CGT).

Profits on gains arising would be extracted in the same way as outlined above.

On the sale or liquidation of the company the shareholders would be charged to CGT on the value of their shares less any cost. As shares are likely to be subscribed for at par, CGT will be charged on the whole increase in value usually at 20%.

One of the main advantages to a FIC are the IHT benefits. Not only is value passed to the other shareholders on the creation of the company (subject to the seven year survivorship rule) but any increase in value of the investments is transferred immediately. Any further shares can be passed on later down the line, potentially via a trust. As the value of the founder’s shareholding drops, the transfer of wealth to the other shareholders reduces the founder’s exposure to IHT.

HMRC are also reviewing IHT generally, potentially looking to impose lifetime tax charges on all gifts which could include those within a FIC. These changes are in law as yet therefore if you are considering moving wealth to the next generation we would recommend this is done sooner rather than later. 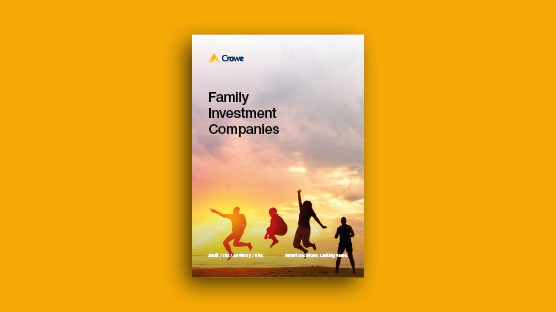 There is no 'one size fits all' to planning an FIC however there are considerable savings to be made where the structure is appropriate. As with any tax planning there are risks and it was only a matter of time before HMRC took a look at FICs. In our view whilst some structures may be open to challenge for most this is not likely to be the case. What may change is the rate of tax applied to the income. This in itself will reduce some of the savings but would not remove all the benefits.

What is important is that a FIC is considered as part of your wider family wealth planning. Our private client team are experienced in this area and can help you create an appropriate plan to protect your wealth for you and your family.

For more information on the issues outlined in this guide or advice on your individual circumstances please get in touch with your usual Crowe contact.

Company car tax in the COVID-19 world – it can pay not to drive
What relief is available to employers with a company car policy during the COVID-19 lockdown?

Crowe reacts to Inheritance Tax proposal issued by the Office of Tax Simplification
New proposals following the OTS's second report on the review of Inheritance Tax.