Have macro-economic events dictated firms’ results, or was it business as usual? Looking forward, what do law firms see as being business critical risks and where will they focus their resources in the coming year?

Against a backdrop of another 12 months of political and economic turbulence, this year’s annual law firm benchmarking makes interesting reading. The results of our benchmarking, which are based primarily on results from participants with financial years ending in spring 2019, provide a timely snapshot of UK legal market performance.

The uncertainty created by Brexit and its associated political fallout is, of course, not new. This year, we see another steady performance, with aggregate growth across all participants falling back slightly to 6.5%. Looking beneath that headline growth figure we find very mixed results. 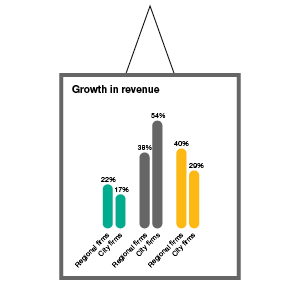 Are conditions ripe for further consolidation in the sector? More than a third of city firm participants think so, although this view is only shared by just over a fifth of the regional firm participants.

The market does appear to be hardening and, economically at least, it is difficult to see a significant improvement in the 2019/20 year. This is the view of many law firms, with 57% of participants stating they have a negative outlook for the UK economy in the coming year. City firms are generally more concerned than their regional counterparts.

Encouragingly, many firms still see opportunities ahead, with three‑quarters of participants stating they either have a positive, or very positive, outlook for their firm for the coming year. Without doubt, law firms will continue to play an important role as the UK deals with the implications of Brexit; regulatory change is so often the catalyst which creates demand for professional advice.

It seems that firms are positive with good reason. The majority of participants grew their revenues and more than a third of firms achieved growth in excess of 10%. Regional firms generally achieved higher growth rates than seen in the City, which is a reversal of last year’s position.

In aggregate, the firms in this year’s benchmarking have increased their total profit pool by 9% but this masks some considerable variation between firms. 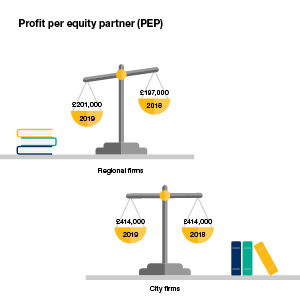 Over a third of participating firms suffered a fall in their total profit pool this year, with both city and regional firms impacted equally. On average, the decrease in profit for these firms was around 7%.

The good news is that for the firms who increased their total profit pool, just over two thirds did so by more than 10%. Interestingly, the biggest improvements generally came from those firms in the sub £20 million revenue band, most of whom are based outside of the City.

Profit per equity partner (PEP) levels appear to be under pressure. While regional firms have managed average PEP growth of just under 2.5% compared to 6% last year, the City average has remained static following on from the 8% increase reported last year.

Digging deeper reveals the pressure in the City with over 40% of the city firms experiencing a fall in PEP this year. It’s not all good news in the Regions with just under 30% of those firms showing a fall in PEP.

That said, for this year’s participants, average City PEP of £413,000 continues to run at a level which is more than double that of the regional firms of £201,000.

This year, the number of firms growing their teams fell slightly to 64%, although it was the city firms who made the greatest investment in headcount, almost doubling that of the regional increase. 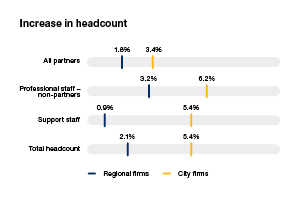 We still see only inflationary rises in fees per fee earner of 2.2% in the City and 1.3% in the regions. Either productivity gains remain stubbornly difficult to implement, or any gains made are only at a level that offsets price pressure from clients. For now, the model of ‘more heads equals more revenue’ still appears to be holding.

Salary pressure has cooled in the City this year, with the average cost per head only increasing by 0.9%. Compare this with the 3.7% average increase reported by regional firms and we can conclude there is still competition for talent in the regions. Holding onto your best people is a priority; more than half of participants identified retention of our key people as a business-critical risk when only 29% of participants considered the availability of people with the right skills to be business-critical.

How are firms going to achieve this? With many firms planning to update their people development strategy, the answer appears to be flexibility; almost two thirds of firms plan to increase their level of remote, agile and virtual working in the coming 18 months.

In the current environment, flexibility can be key to success. As shown this year, well-run firms can achieve profitable growth in an uncertain economic environment and the legal services world remains fast-paced, uncertain and challenging but still full of opportunity. Being adaptable, change-ready and quick to respond will no doubt be the key features of next year’s most successful firms. 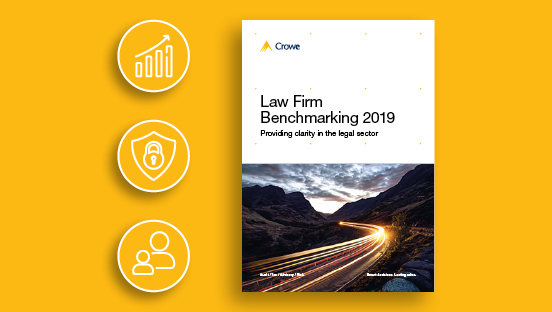 This year's headline results show another year of steady performance. But look a little deeper and we find greater volatility in both revenue growth and profitability.

2019 Law Firm Benchmarking: City firms
It has been another competitive year in the City with the proportion of firms reporting a fall in revenue this year rising to 17%.

2019 Law Firm Benchmarking: Regional firms
Many firms will be pleased with this year’s results, particularly equity partners who enjoyed growth in PEP.

2019 Law Firm Benchmarking: Where next?
For now, it is all about managing current operational risks and adapting how teams deliver their work.