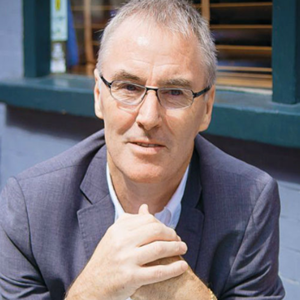 I am more involved in industry now than I was when I had a full-time role as vice chairman of a 350 strong agency.

Tell us about yourself and Podge...

I have two businesses, one that I use for my consultancy work and the other is Podge Events which now comprises of four (sometimes five) events a year in the UK, with the occasional overseas trip. So far we have held Podge lunches in Stockholm, Amsterdam, Vienna, New York and Hong Kong. It’s a family business.

What made you start Podge?

I organised the first podge lunch for design leaders on January 28th 1994 at Quaglinos. There were 30 design leaders in the private room and we had a set of rules for the day which have stayed in place for 25 years. Nobody got to choose who they sat next to, everybody shared the bill equally, we move around between courses and as the lunch grew in size 50% of guests always change which keeps it fresh and relevant. I started it because most of the people around the table had been my clients in the 1980s and I successfully sold my business on an earn out which ended just before the recession in 1990. Some of the people had not been so lucky and the recession took its toll, I thought it would be a good idea to get leaders talking to each other and seeing how they could help each other should it happen again. It was never meant to be anything other than a one-off.

How was Podge evolved over the years?

After the first lunch in 1994 it became apparent that there was a need for a gathering of senior people that did not include the typical awards ceremony with auctions etc etc. A typical event then is still the same 25 years later, the organisers make their money by selling tables to fill a room without any particular care of who sits on those tables. Podge has never sold tables or run awards or any other commercial schemes, every invitation goes out individually to senior people in the the industry and nobody (other than the organiser) gets to choose who sits where. A tremendous amount of time goes into getting the chemistry in the room right and making sure that everybody who attends is surrounded by the type of people they can learn from and whose company they can enjoy. It makes the organising significantly more difficult than a normal event as it increases the workload tenfold (per individual rather than per table) but it guarantees the highest quality of guests in the room.

The key to its success is making each lunch annual and changing 50% guests for each lunch. Over time this ensures that it can never become a clique and as some people get older and consider retirement there is a constant supply of younger people wanting to meet their heroes and bringing fresh energy. Also, the branding of every event is done by somebody in the room and is always at least a year in the planning. So a business in the room volunteer to do the branding, the website, the graphics, print etc etc and every year the aim is to outdo the people who did the previous one. This applies to each of the lunches. www.podgelunch.com, www.digitalpodge.co.uk, www.sportspodge.co.uk and www.stodgepodge.com so each year four different agencies get to put their stamp on the podge lunch history and then pass the baton on to another agency the following year. This is unique and creates a real camaraderie amongst the guests.

How do you sustain the culture of the Podge events as they grow?

The culture is very important and it’s the guest list that ensures this never fails. By changing 50% guests each year (for each lunch) there are always 50% spread around the room who understand how it all works and the new people bring something fresh to proceedings. Everyone knows that there are no guarantees that attending one year gets you a place the following year so it becomes VERY important for everyone to want to make the cut. By having a different theme for every lunch and different companies working on the creative that adds a lot to the build up to each lunch and a sense of excitement builds up amongst people hoping to get their invite. It would be quite easy to move to a larger venue and double the size of each lunch because the demand is there but it is our feeling that over time this would diminish the kudos that podge holds in each of the sectors it works in. Our capacity at the Institute of Directors is 250 of which 125 are always NEW. The culture is key to its success and that is controlled by the organisers and by key individuals who provide the backbone to making each lunch successful. Our sponsors play a major part in that and Crowe UK have supported us for many years now.

If your network could say three things about Podge what would it be?

Do you miss being involved in industry?

I am more involved in industry now than I was when I had a full-time role as vice chairman of a 350 strong agency. I work as a non-exec for seven companies who are at the forefront of tech and creativity and www.podgeevents.com runs alongside that as a vehicle for surrounding ourselves with leaders from the industry. Also for the last 12 years (since its inception) I chair the judges at the annual www.dadiawards.comand choose all the judges. Having a network that is so fluid keeps me busy as my hair goes greyer and I move into grandparent territory. Life is fun. I was proud to be included in the Inaugral Digital Hall of Fame organised by Industry body BIMA for services to the digital industry in its first 10 years. BIMA still organise this and induct one or two people per year into the hall of fame.

What helped you during your career journey?

In the particular industry I trained in the changes over the years were incredible. My apprenticeship was in hot metal printing and when I finished my five years I was a compositor. The changes in that industry over the decades that followed put an end to many careers as people found it difficult to make the transition through to digital in the 1990’s. I was lucky in that I changed roles at the right time and took risks that could have backfired badly. I was one of the first people working in the digital sector on interactive CD rom’s before the internet and building a reputation early allowed us to be seen as leaders amongst the thriving new community that sprung out of that. I started www.digitalpodge.co.uk in 2003 and that has also helped me stay connected with the movers and shakers and many of my consultancy roles have come directly through this gathering of leaders.

What does the future hold?

The million dollar question. There is no doubt that I have been blessed with the quality of the people that I share my family and professional life with and I hope that this continues long into my slow retirement in the years ahead. Working with young companies who require advice keeps me young and feeling valued. No nicer feeling in the world.