Healthcare reform has spawned a wave of consolidation within the sector not seen in decades. Following are five of the major trends influencing the heightened activity. These same forces will continue to drive mergers and acquisitions during the remainder of 2015. 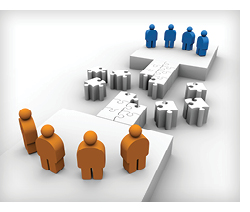 1. Healthcare reform has created clarity within the industry. As a result of passage of the Affordable Care Act (ACA), more than 11 million previously uninsured Americans now have or are in the process of obtaining health insurance coverage.1 The clarity and predictability within healthcare created as a result of healthcare reform has boosted confidence in the industry among investors as well as lenders. The increased comfort level stemming from this macro-level change has stimulated openness to deals.

There is some speculation that interest rates could creep up in 2015, possibly slowing merger and acquisition activity somewhat. However, we know that reimbursement rates for providers will remain flat, decrease slightly, or, at best, grow at rates lower than inflation. These cost pressures are leading many healthcare companies to pursue consolidation and integration to gain new efficiencies, economies of scale, purchasing power, and clout in negotiating contracts with payers.

3. The pay-for-performance paradigm is increasing demands on providers and the need for infrastructure to meet those demands. Similarly, the fundamental shift from a volume-based to a value-based system has been transforming and will continue to reshape the delivery of care by tying reimbursements directly to quality, safety, reductions in avoidable readmissions, and other critical measures. Private insurers typically follow Medicare’s lead, which means providers will be under growing pressure to demonstrate quality, safety, and appropriateness of care.

4. The demand for healthcare services will continue to increase and stretch capacity. Approximately 11 million previously uninsured Americans now have coverage as a result of the ACA, and millions more are expected to gain coverage eventually.2 This sizable growth in the number of insured Americans translates directly into an increased demand for healthcare services. Providers will continue to seek the efficiencies, cost savings, competitiveness in the marketplace, and expanded capabilities that consolidation and integration with other providers can offer.

At the same time, the population as a whole is rapidly aging. More than 3.5 million members of the baby-boom generation turn 55 each year. By 2030, there will be an estimated 72.1 million older Americans, more than twice the number in 2000. As the elderly population increases, so will the prevalence of chronic diseases and the need for healthcare services to manage those diseases.

5. Specialty physician practices will offer some of the most attractive growth opportunities. Specialty practices, such as anesthesia, emergency, and pediatrics services, with whom many hospitals have outsourcing arrangements, tend to have higher reimbursement rates and higher margins than primary care practices. At the same time, there is still considerable fragmentation within this sector. Very few national companies have been able to generate sufficient cash flow.

Investors can provide the capital and IT infrastructure these specialty companies need to grow and maximize their earnings potentials.

Though the uncertainty of what will happen with interest rates makes 2015 a year in which to proceed with caution, the environment for consolidation still remains favorable. Move carefully, take your time, and do your financial, regulatory, and legal due diligence.