Impact of the ACA on Patient Responsibility

By Blake D. Evans, Alex P. Garrison, and Brian B. Sanderson
Healthcare Connection
share
(ACA) became law in January 2014, no one could accurately predict its impact. Now that the law has been in effect for nearly a year, enough data is available to assess the early results and examine the effect on patient responsibility, which is the amount that a patient owes on healthcare services rendered, excluding insurance payments. Are hospitals seeing more insured patients than they saw prior to January 2014? Has patient responsibility increased or decreased? How does each state’s decision about whether to expand Medicaid have an impact on the ACA’s stated goal of insuring more low-income Americans?

It was inevitable that the insurance mandate and Medicaid expansion enacted as part of the ACA was going to have a significant effect on patient responsibility. However, when the law was first implemented, the magnitude of the changes could not be determined. What has become evident is that patient responsibility is affected primarily by Medicaid expansion as well as shifts in hospital payer mix and the need to realign hospital operations.

As part of the ACA, states are offered additional federal funding to expand their Medicaid programs. Twenty-eight states and the District of Columbia have decided to expand Medicaid, two states are in open debate, and 21 states have decided not to move forward with expansion. A patient’s healthcare coverage options depend primarily on his or her state and income level. The new rules allow Medicaid to cover adults younger than age 65 with income up to 133 percent of the federal poverty level. In addition, children 18 and younger are eligible up to the federal poverty income level, based on individual state guidelines.

Free or low-cost health coverage is available to people meeting certain income requirements in states that have embraced the Medicaid expansion. Those who live in a state that hasn’t expanded its Medicaid program and who have limited income might, depending on where their income falls, have few options for health coverage. So how has the decision to expand Medicaid affected patient responsibility?

The large decline in charity write-offs could be explained as a result of the expansion of Medicaid. As is the case with Medicaid, most provider charity programs are awarded based on the federal poverty guidelines, so Medicaid now is covering patient costs that previously would have been covered by hospital charity programs. When the states without Medicaid expansion were analyzed, the opposite effect was seen, with the amount of uncompensated care appropriated to charity remaining flat. In states without Medicaid expansion, uncompensated care associated with bad-debt write-offs declined by 0.6 percent, roughly half of the 1.2 percent decline in states with Medicaid expansion (see exhibit). A variety of factors could be contributing to this variance, including Medicaid expansion, the use of state-run versus federally run exchanges, and provider focus on bad-debt reduction. 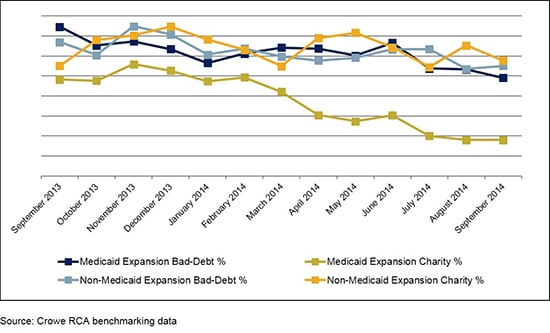 For any company to stay in business, it must continuously produce a viable product, be it shoes or tires. To remain competitive, companies always are looking for ways to retain existing customers and attract new ones. Understanding their consumer base allows companies to plan for the future.

Hospitals have the same needs as any other business. They remain competitive by having a clear perception of the patient needs in their communities. “Payer mix” is the healthcare term used to define the percentage of revenue received from private insurance, government insurance (Medicare and Medicaid), and patient responsibility. Understanding payer mix changes enables a hospital to understand (and reserve for) changes in expected net revenue – including the need to establish more protocols to collect patient liability balances at or near the point of service.

Hospitals lose money every day because they don’t take the time to appropriately align business operations according to their payer mix. For instance, if a hospital is located in a non-Medicaid expansion state, it should reinforce its financial counseling efforts to assist patients with enrollment in the health insurance exchange. Enrolling more patients in the health insurance exchange will allow the hospital to increase reimbursement from insurance payments and reduce overall patient responsibility. Likewise, if a hospital is in a state that has embraced the health insurance exchange and Medicaid expansion features of the ACA, then it should reinforce point-of-service collection efforts to assist patients with appropriate methods to pay their deductible.

The ACA will continue to affect levels of patient responsibility. Understanding how their states’ decision about Medicaid expansion affects patient responsibility, evaluating payer mix before and after ACA implementation, comparing key performance indicators to national benchmarking data, and evaluating and updating their operational strategies to align with present and future changes will help hospitals remain competitive and increase their revenue.