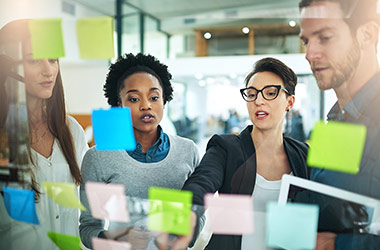 With new survey data showing that the competition for talented banking industry executives and employees is intensifying, banks are applying a range of strategies to attract, motivate, and retain productive team members..

The past several years of relatively steady growth in the banking industry are having a somewhat predictable effect: As banks grow, expand, and compete for customers, the competition for skilled executives and productive employees is intensifying as well. That is one of the important conclusions that can be drawn from responses to the 2016 Crowe Bank Compensation and Benefits Survey.

Every year, Crowe surveys banks across the United States about compensation trends, benefits, incentives, and other human resource issues. The 2016 survey drew responses from 378 participants, representing a broad cross-section of the banking industry. Sixty-one of the responding institutions listed total assets of $1 billion or more. Another 92 banks listed total assets between $500 million and $1 billion, while the remaining 225 banks were below the $500 million mark in asset size.

In addition to providing salary benchmarks for 255 different job positions, the survey asked participants about trends in compensation strategies, the use of incentives, benefits packages, and other human resource practices. This broad array of survey data can provide useful insights into some current leading industry practices for attracting, motivating, and retaining talent.

One of the most striking findings of the 2016 survey is that bank employee turnover rates have reached their highest point in the past 10 years, as shown in Exhibit 1. It is important to note that both officer and nonofficer employees are changing jobs at a faster pace. 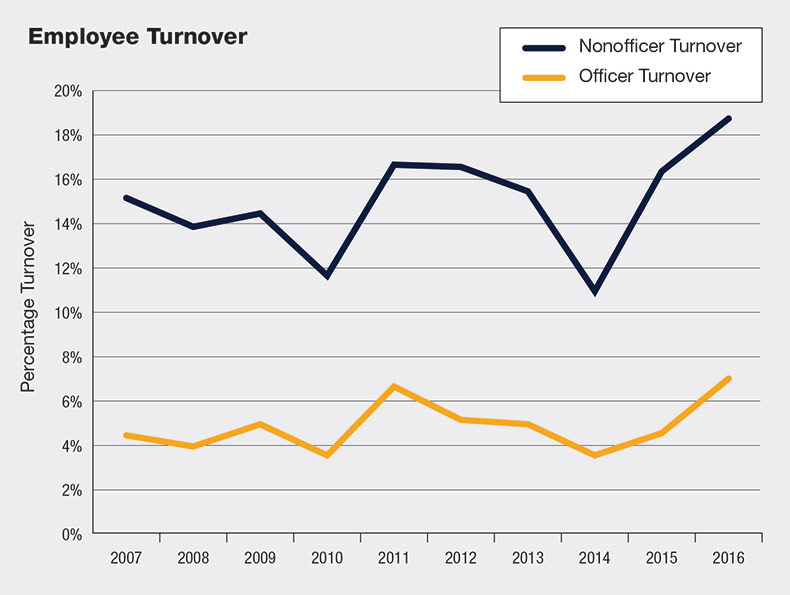 While consolidations and individual performance issues do contribute to turnover, the particularly sharp increase in turnover during the past two years suggests other factors are at work as well. It seems apparent that a growing number of bank employees now sense that the economy and job market are sound enough for them to take on the risk associated with a job change and are seeking out new opportunities.

This observation is reinforced by other survey responses. For example, the number of banks reporting plans to reduce or simply maintain existing staffing levels has declined every year since 2013, while the number planning for either normal or more rapid staff growth due to expansion or acquisition has increased steadily over the same period. These concurrent trends indicate the competition for talent is likely to continue intensifying in the near future.

Compensation Trends – How Banks Are Competing for Talent

One obvious way that banks can respond to the competition for talent is by pursuing more aggressive compensation strategies. The survey offers evidence that this trend is underway. For example, as Exhibit 2 illustrates, the proportion of survey respondents who reported their institutions plan to engage in above-market compensation strategies has nearly tripled in the past four years. 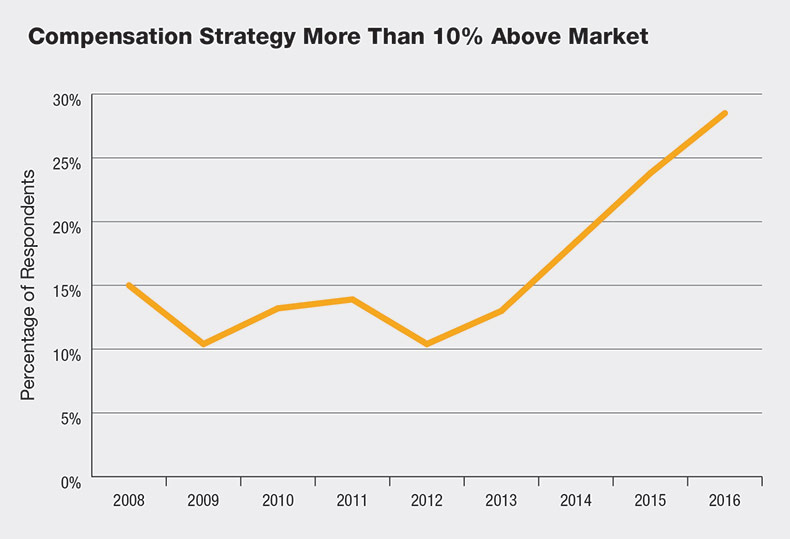 More than a quarter of all banks (28.5 percent) reported that their strategy is to offer total compensation packages (including pay, incentives, benefits, and other rewards) that are more than 10 percent above the market average. Only 6.1 percent of the respondents said they plan to offer total rewards packages that are more than 10 percent below the market average.

But offering larger pay and compensation packages is only one way – and not necessarily the most effective way – to attract high-performing officers and employees. Another important aspect of a bank’s compensation strategy is the relative difference in the rewards offered to average, above-average, and below-average performers. In this area the 2016 survey reveals a somewhat mixed picture.

As shown in Exhibit 3, the difference in the salary increases offered to above-average and below-average performers has been shrinking over the past three years – from a difference of 3.9 percentage points in 2014 to only 2.9 percentage points in 2016. When the spread between high performers’ and low performers’ base salaries shrinks, the net effect is likely to be a reduced motivation for the most desirable employees. 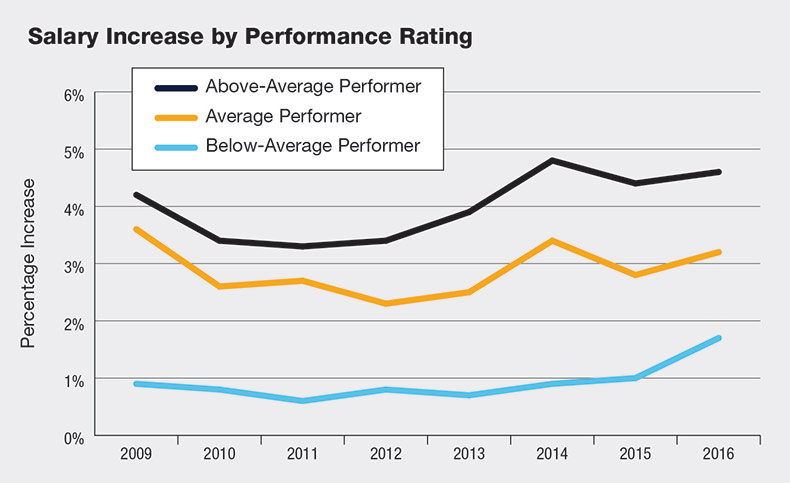 On the other hand, this narrowing of base pay ranges can be offset somewhat by the growing use of direct incentive pay. Here the survey shows a positive trend. As illustrated in Exhibit 4, incentive payouts, when compared to base salary, have been significantly higher over the past three years than they were during the depths of the recession. 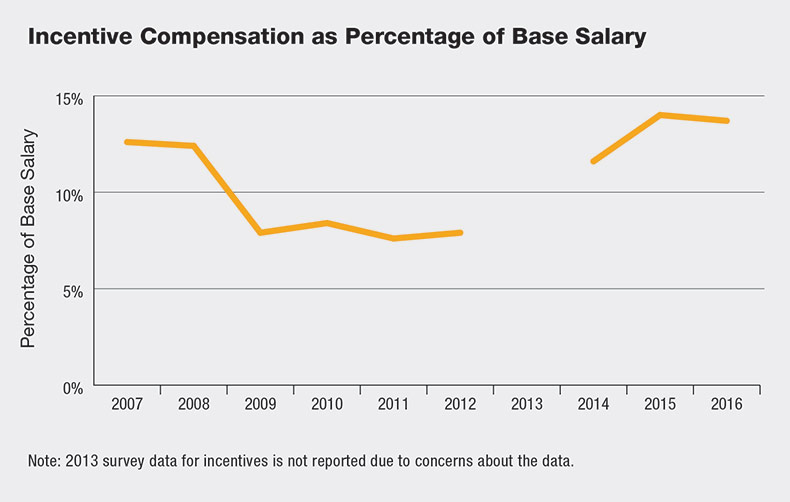 The effectiveness of performance incentives is not guaranteed, however. Incentives should be large enough to offer a meaningful income opportunity rather than just a token amount. It’s also important to differentiate between performance incentives, which reward individual or team performance, and profit sharing, which reflects the success of the entire bank.

To be effective, performance incentives should be “line of sight” incentives – that is, the employee should be able to see a direct relationship between his or her work activities and the reward being offered. Ideally, incentives should be relatively simple, based on only a few metrics rather than on overly complicated formulas. They also should reward results that genuinely exceed normal expectations – providing incentives for merely average performance can actually serve as a disincentive for the true high performers.

Another good rule of thumb is to establish “SMART” performance goals – that is, goals that are:

It’s also important to bear in mind a simple truth: When you reward certain behaviors, you generally get what you asked for. So make sure all incentives being offered are aligned to and supportive of the bank’s goals and strategy.

Beyond Compensation – Other Benefits and Rewards

The cost of employee benefits is another area of continuing concern for all types of organizations, including banks. As Exhibit 5 demonstrates, benefits cost has begun to stabilize after several fairly volatile years, which were driven largely by the drastic changes in healthcare plans.

When asked what they are doing to contain these costs, a large majority of the respondents reported they are increasing deductibles, co-payments, and the employees’ share of premiums, and almost as many said they are considering switching to another plan provider.

Looking beyond traditional pay and benefits, many banks are turning to more innovative ways to compete for talent. In fact, many banks that are considered to be “employers of choice” in their markets are not necessarily the highest-paying employers. Instead, they shift a portion of their human resource costs toward benefit programs that promote work-life balance, such as wellness programs, health club memberships, tuition reimbursement, casual days, and employee assistance programs to help employees resolve personal, family, or financial problems.

Some banks that are particularly focused on such programs go so far as to present each employee with an annual “total rewards statement” that spells out all the investments the bank has made in him or her. In addition to communicating the value that the bank places on each employee, such statements also can help encourage greater usage by reminding workers of the benefits available to them.

As the 2016 Crowe compensation survey indicates, the competition for talent is likely to continue intensifying for the foreseeable future. That means banks will need to continue monitoring events closely due to anticipated changes to healthcare benefits, new regulatory scrutiny of sales practices and incentives, and new rules regarding executive pay disclosures. Unforeseen events could make it necessary for banks to adapt their rewards strategy quickly to respond to changing circumstances.